Where’s the sentiment reset? – Humble Student of the Markets 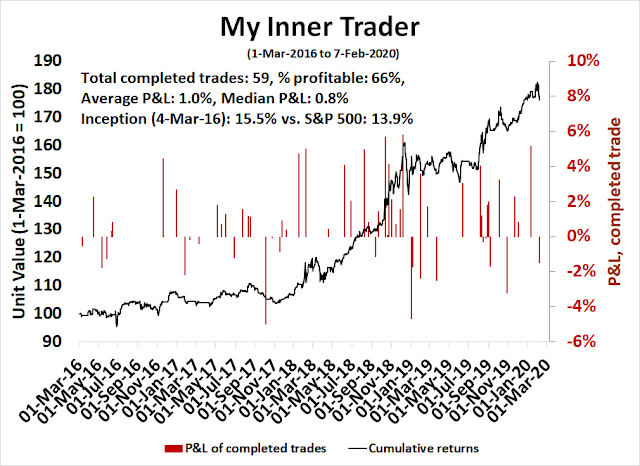 Is sentiment too bullish?

Mark Hulbert warned about excessively bullish sentiment leading to a market decline in a Marketwatch column on February 1, 2020. At the time, Hulbert wrote that he would like to see bullish sentiment to retreat and the Wall of Worry to rebuild.

It would be a good sign if they rush to the sidelines and then quickly jump onto the bearish bandwagon. In contrast, it would be a bad sign if they stubbornly hold onto their bullishness in the wake of the decline. In that case, contrarians would expect that an even deeper correction would be necessary to rebuild the Wall of Worry that would support a new leg upwards.

The market did fall briefly, but rallied in the face of massive PBOC market support. In a follow-up column last week, Hulbert issued a second warning about excessive bullishness. His Hulbert Stock Newsletter Sentiment Index fell, but rose again into the top 80% of bullishness. Such readings have historically been resolved with subpar returns over a 1-3 month time frame.

The stock market advance appears to be unsustainable on an intermediate term basis, but even Hulbert’s analysis shows a return of 0.0% over one month, which is hardly a wildly bearish forecast. The bigger question is, how vulnerable is the market in the short run?

It would be very easy to turn tactically bearish here, but let us turn conventional technical and sentiment analysis on its head. It is entirely possible that we are undergoing a period where sentiment resets briefly, and stock prices rally to even more highs as pictured by my green annotated periods. 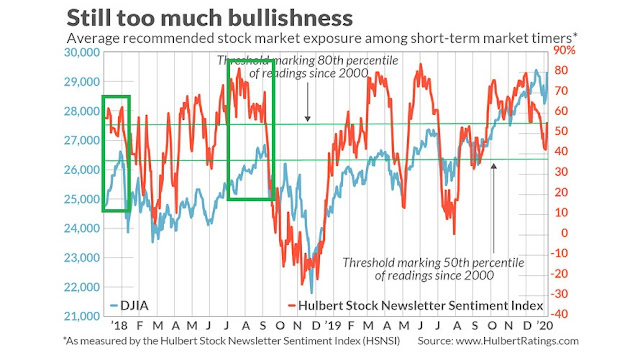 How vulnerable is the market? Has sentiment reset sufficiently for the market to make another run at fresh highs?

A “sort of” sentiment reset

One of the most useful measures of trader sentiment is the rather unscientific Callum Thomas weekend Twitter sentiment survey. Last week’s survey showed the second lowest level of bullishness in the short history of the survey. Preliminary results indicate that the extreme level of bearishness has considerably moderated. 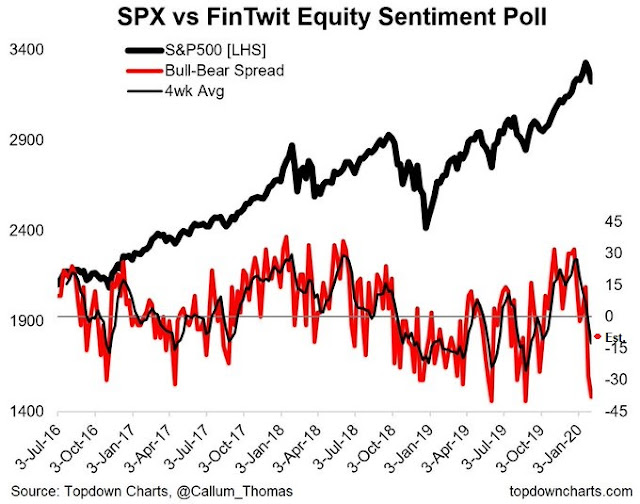 My own sentiment models, which are mainly based on market based and technical data, tell a different story. Fear levels, as measured by option trading, have spiked. In the past, market tops, which are shown in shaded grey, have seen at least one of the five models flash warning signs. Today we have none. 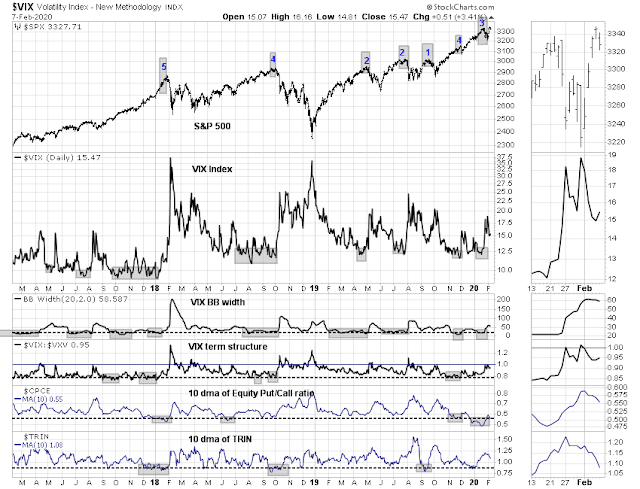 I interpret these conditions as a market that may hit a mild air pocket next week, but not a major decline.

A review of market internals reveals a mixed picture. Market leadership by market cap band shows narrowing leadership by NASDAQ and megacap stops, while mid and small caps lag badly. Conventional technical analysis will conclude that this is not sustainable, and caution is warranted. In the short run, however, NASDAQ and megacaps have gone parabolic. In the words if the legendary technical analyst Bob Farrell, “Parabolic advances usually go further than you think, but they do not correct by going sideways.” The question is how much further does the parabolic move go? 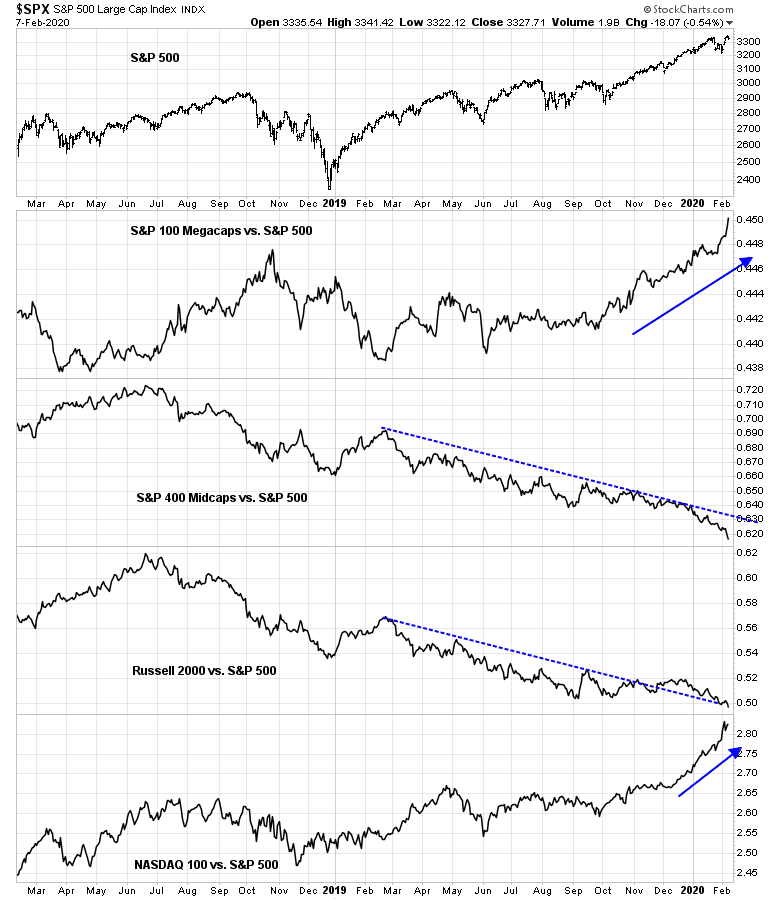 The analysis of the top five sectors tells a similar story. The top five sectors comprise just under 70% of index market cap, and it would difficult to see how the market can make a major move without the participation of a majority of these sectors. The relative performance leader is technology at 23.2% index weight, with healthcare and financial stocks underperforming at a total of 27.2% of index weight. Consumer Discretionary stocks (read: AMZN) at a 9.8% weight staged a brief comeback last week, but relative performance is volatile. This is the picture of narrowing leadership, but also a picture of bulls and bears struggling for control of the tape. 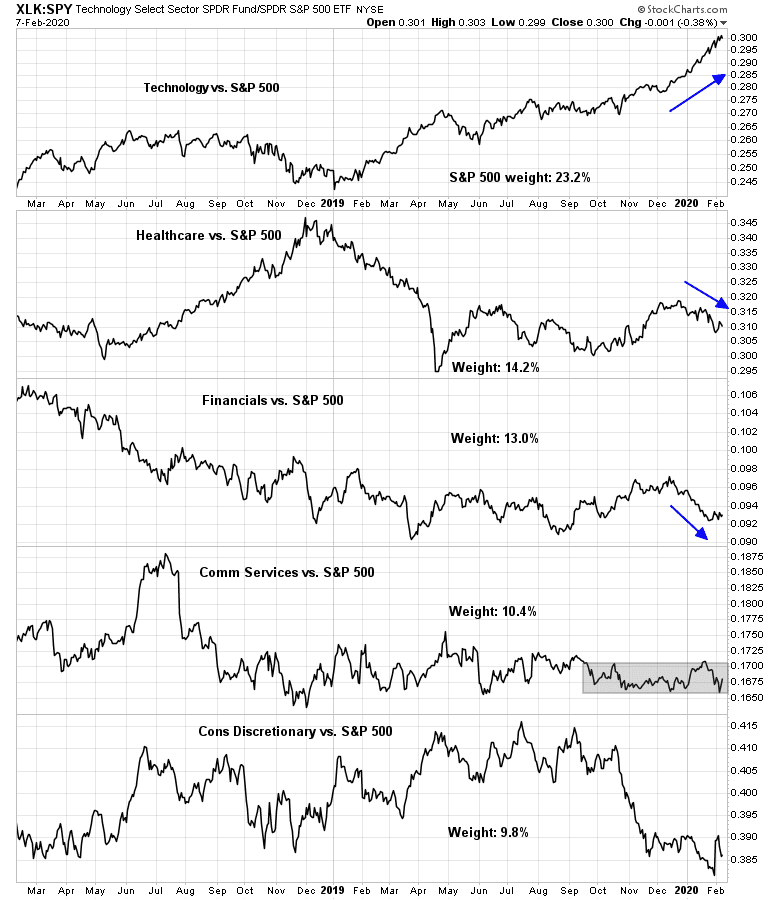 Cross-asset, or intermarket, analysis is a similar mixed bag. The bulls can point to the strength in USDJPY, which has historically been highly correlated to the stock market. 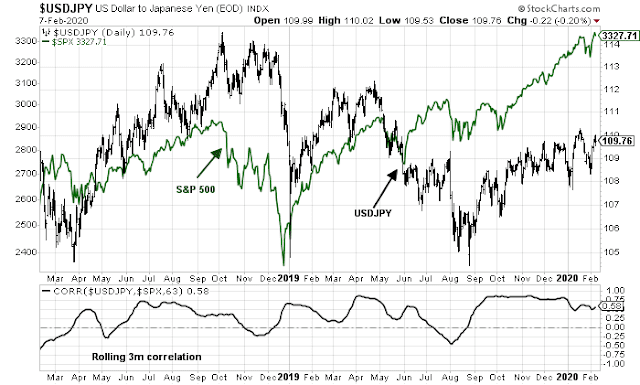 The bears can highlight the negative divergence from credit market risk appetite. High yield and EM bonds have underperformed their duration equivalent Treasuries, and the price of these instruments have not confirmed the stock market’s highs.

My inner trader interprets these conditions in a cautiously bullish fashion. The ratio of high beta (SPHB) to low volatility (SPLV) stocks (middle panel) has been a useful signal of tradable market tops in the past, and this ratio is not rolling over. My base case scenario calls for a likely pullback to test support in the 3300 area next week, to be followed by a rally to new highs, and accompanied by a negative NYSI divergence and a rollover of the SPHB/SPLV ratio. 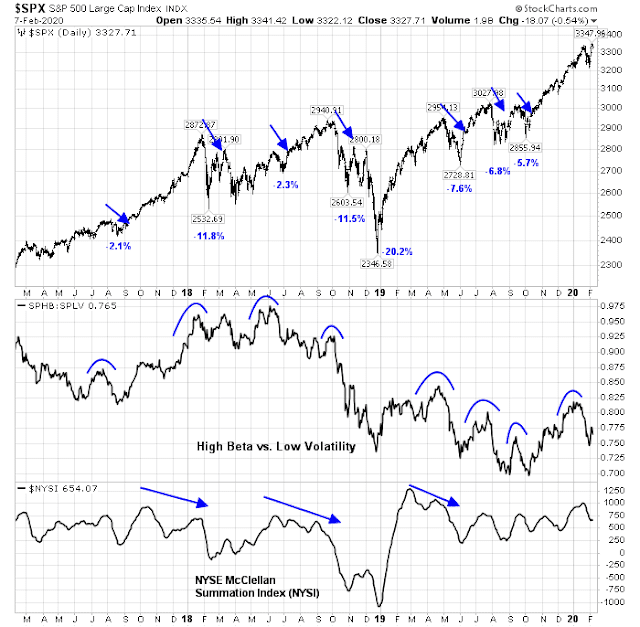 Short-term momentum is resetting from an overbought reading. 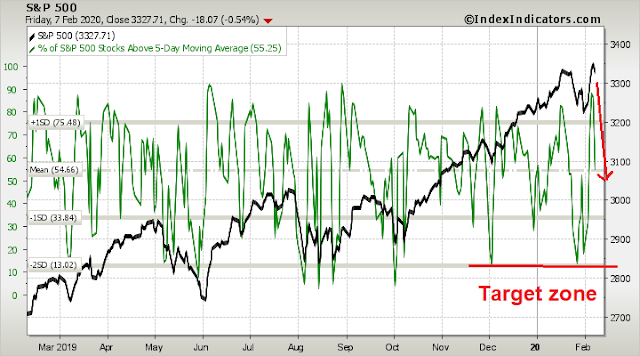 There is a likely support level at about 3300, which I expect to be tested early next week.

12 thoughts on “Where’s the sentiment reset?”