An animal spirits revival? – Humble Student of the Markets

Mid-week market update: The animal spirits are back. Just look at the price action in Tesla.

In this environment, it is no surprise that the stock market is embarking on a test of the old highs.

Lines in the sand

I had set out one line in the sand (see A key test: The Zero Hedge bottom?) of the market might react to news. Notwithstanding the Iowa caucus debacle, in which the results are not fully known yet two days after the event, the market is rallying in the face of news of more uncontrolled spread of the coronavirus. Trinh Ngyugen at Natixis pointed out that this virus is worse than SARS at this point in the outbreak, based on the figures coming out of China. 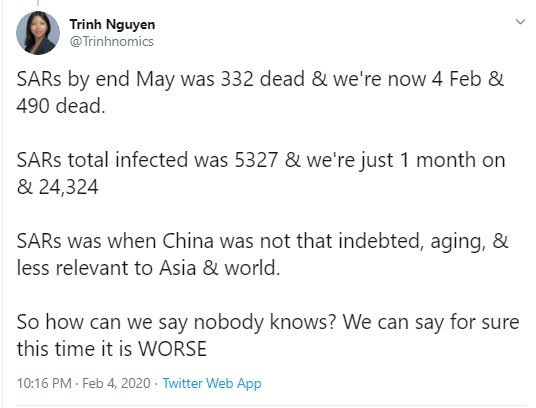 To be sure, Asian market spiked upwards overnight on two separate reports that breakthroughs had been achieved by Chinese researchers (CGTN report) and by British researchers (Sky News report). But those accounts are unverified, and CNBC reported that the WHO has played down the possibility of drug breakthroughs.

The World Health Organization (WHO) has played down media reports of a drug breakthrough against the coronavirus outbreak, saying there are “no known” drug treatments against the virus.

“There are no known effective therapeutics against this 2019-nCoV and WHO recommends enrollment into a randomized controlled trial to test efficacy and safety,” WHO said in a statement on Wednesday.

“A master global clinical trial protocol for research and prioritization of therapeutics is ongoing at the WHO,” it added.

Yet, the market continues to take a risk-on tone. The SPX took on a decidedly bearish tone when it broke down through the 3300-3310 zone. Now that the index has rallied through that same region on the hourly, it is now testing the old highs.

Sentiment models have partially reset, though readings did not fall to capitulation levels. 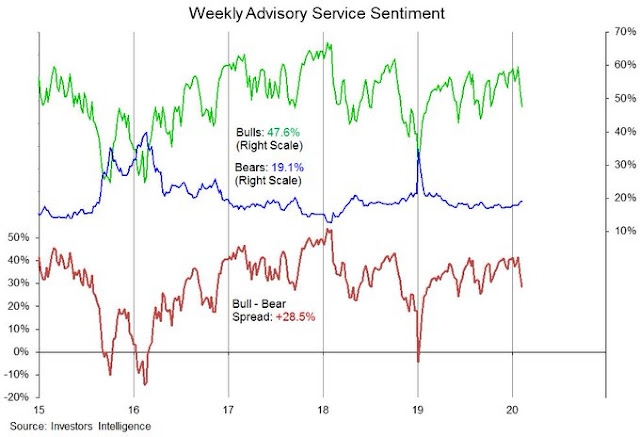 On the other hand, Citigroup strategist Tobias Levkovich recently stated in an interview that “Pretty much every client we talk to wants to buy the dip, and that is not comforting.” Bears can interpret his remarks in a contrarian fashion as a signal to be cautious. Bull can see this as the resumption of a FOMO buying stampede.

Pretty much every client we talk to wants to buy the dip, and that is not comforting. It implies that people are very long the market and are willing to let share prices go higher. When we are asked what factors made the Panic/Euphoria Model move into euphoric territory, we highlight one of the inputs (though several caused the shift), as it looks at premiums paid for puts versus calls, and the prices have dropped for puts. Fewer deem the need to pay up for insurance, which indicates substantive complacency. Accordingly, the qualitative/anecdotal evidence is supporting the more quantitative approaches.

These conditions are consistent with the “false rally” scenario I had laid out in the past. Watch for the market to advance to new highs, marked by an NYSI negative divergence. 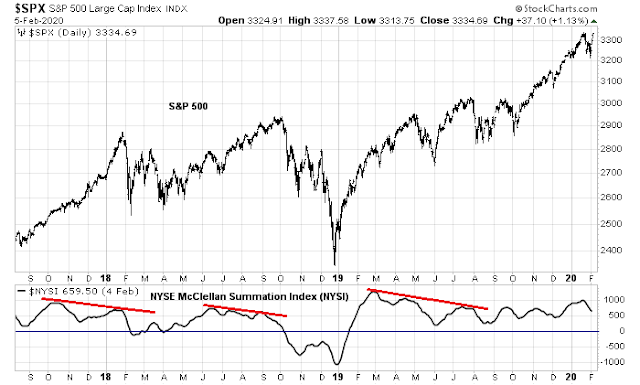 From a tactical perspective, the market is short-term overbought, and today’s rally left an unfilled gap below. Some near-term consolidation or shallow pullback would be no surprise. Subscribers received an email alert this morning that my inner trader had covered all shorts and taken a small long position. Any dip towards the 3300 zone would be regarded as an opportunity to add to long positions. However, a definitive violation of the 3300 level would be a risk-off signal.

An alternative scenario is the latest test of the old highs is a simple bull trap, where the test of old highs fails, or fails just after a false breakout. One cautionary signal is the negative divergence flashed by the 5 and 14 day RSI. 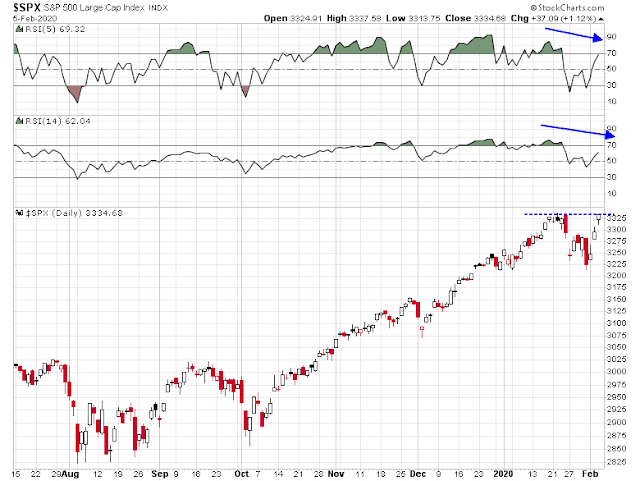 Helene Meisler also highlighted the observations of Frank Zorrilla that past blow-off tops in market darlings like Beyond Meat (BYND), Tilray (TLRY), and silver (SLV) has been accompanied by a nearby market peak. Here is BYND.

The price of TSLA has been going parabolic, but it had its first setback today. No one knows what will happen next, or whether these blow-off top templates are necessarily applicable to market timing. What is certain is volatility is high.. Traders should adjust their position sizes accordingly.

19 thoughts on “An animal spirits revival?”