Here comes the beta chase – Humble Student of the Markets

Mid-week market update: Notwithstanding any issues traders may have with short-term volatility, the market is setting up for a year-end beta chase Santa Claus rally. After a prolong period of defensive posturing, equity fund flows are turning strongly positive again. 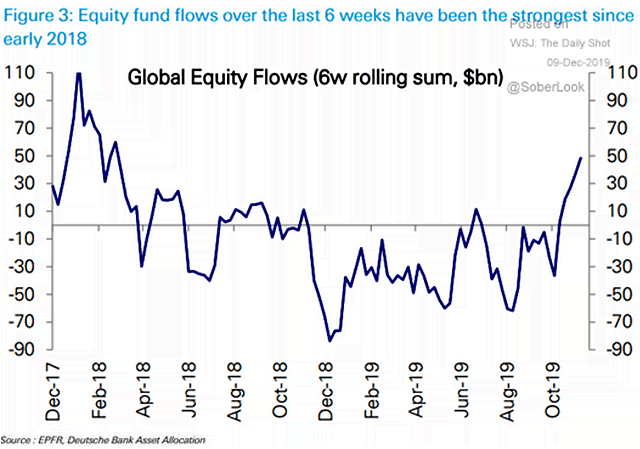 As the TD-Ameritrade IMX shows, retail positioning is still underweight, and the scope for more buying into year-end and 2020 is still significant. 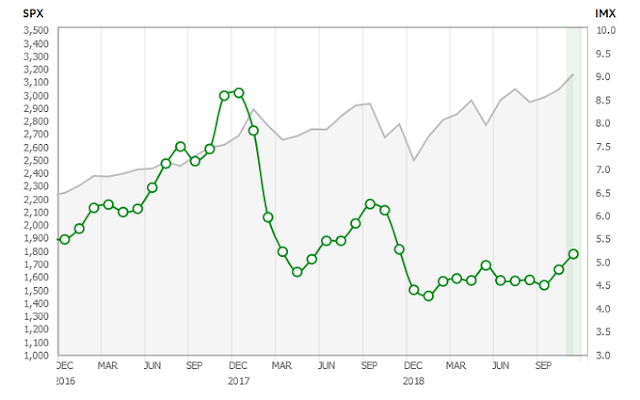 Macro Charts also pointed out that hedge funds are now in a FOMO stampede into year-end. CTAs are ramping up their equity betas. 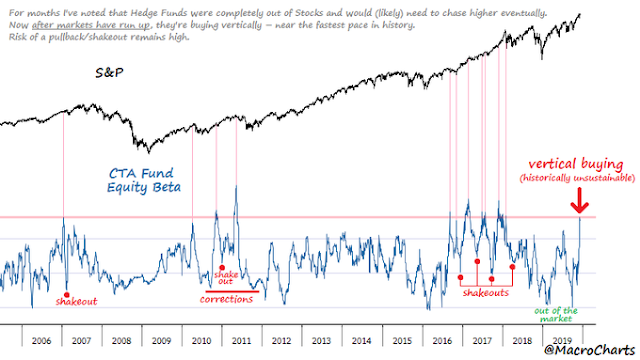 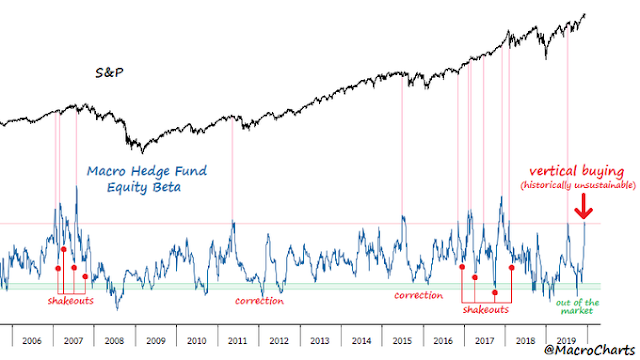 While Macro Charts believes that the buying is unsustainable, the historical evidence is mixed as we have seen both the market flatten out and decline after such episodes, and continued rising prices after such signals. Trading volume is expected to dry up later in December, but if the buying were to continue, a melt-up is well within the realm of possibility as we approach year-end.

Nevertheless, short-term technical structure suggests the market has unfinished business to the downside, at least over the next few days. First, short-term momentum has retreated from an overbought reading to neutral as of Tuesday’s close, but it has not fallen sufficiently into the oversold zone to warrant a sustainable rally. In light of today’s advance, readings are likely to have returned back into near overbought territory. 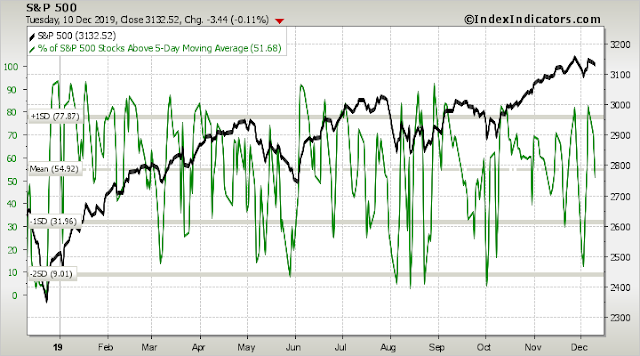 I wrote about how a VIX spike above its upper Bollinger Band is an indication of an oversold market that is ripe for a relief rally. In all likelihood, we are likely to see a re-test of last week’s lows over the next few days, but the re-test is not always successful. As the chart below shows, while the last two re-tests triggered by a VIX upper BB spike were successful, the May re-test was not, and led to a lower low. We have to allow for such a possibility. 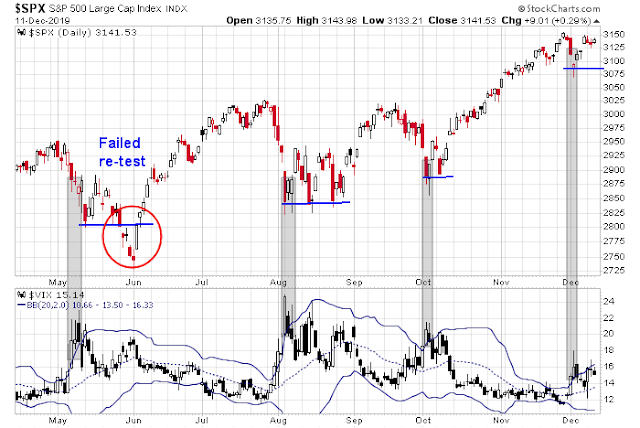 How will the likely re-test be resolved? I don’t know, but it’s like the definition of pornography: I’ll know it when I see it.

There is a variety of opinion of the short and intermediate term outlook. Macro Charts has been highly cautious because his indicators are still bearish. 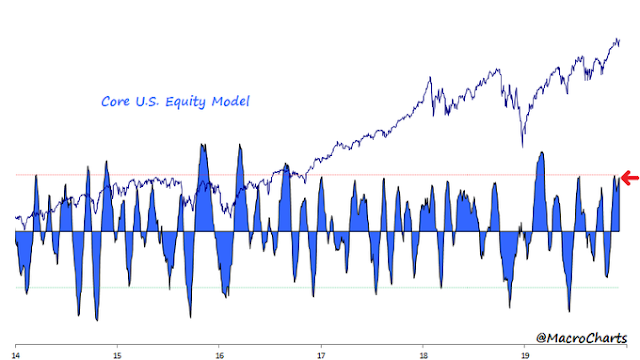 By contrast, SentimenTrader is short-term cautious, but intermediate term bullish.

The SKEW Index, which looks at the risk of a black swan event in equities over the next 30 days, jumped to the highest level since in more than a year. 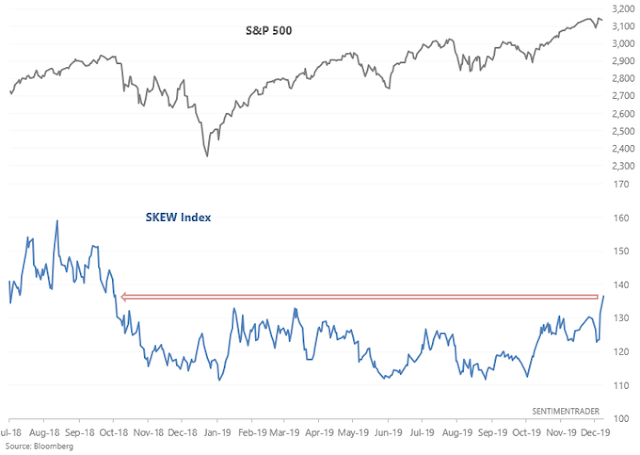 That said, elevated SKEW, or the price of tail-risk protection is an indication of rising fear of extreme events, such as the uncertainty related to the December 15 tariffs, and the outcome of the UK election. These fears could be interpreted as contrarian bullish.

I believe that uncertainty over the on-again-off-again December 15 tariffs will be resolved in a benign manner. Here is how Bloomberg explained the issue:

The latest word on U.S.-China trade talks suggest the Dec. 15 tariff round won’t go into effect. Looking beyond the chatter, there’s a good reason to expect a delay: For the U.S., the December tariff round would have more costs than benefits. Using granular trade data, Bloomberg Economics calculated what share of U.S. imports from different tariff tranches come from China. For the first tranche a mere 7% of the total came from China, allowing imports to be sourced from elsewhere and the disruption to the U.S. economy to be contained. For the final tranche, the share of Chinese goods is a whopping 86% and fallout would be elevated. 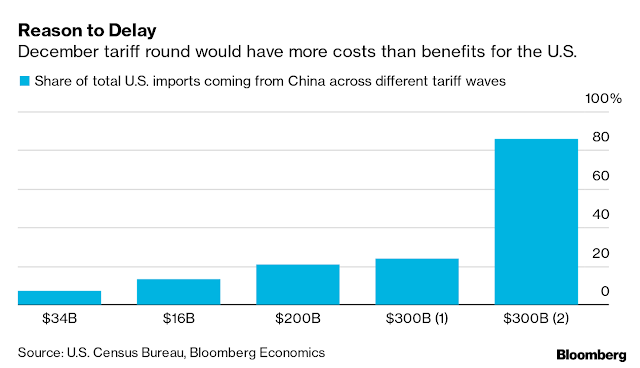 Imposing the next tranche of tariffs would really hurt the US economy. Therefore the most likely outcome is to announce a delay while talks continue.

My base case scenario calls for a rally into year-end after a brief pullback or consolidation lasting no more than a week. This is based on the combination of players with excessively defensive positions who are likely to chase beta into year-end during a period of diminishing liquidity. This represents the ideal combination for a price blow-off into the first week of January. After that, I will have to re-evaluate market conditions.

Both my inner investor and trader are bullishly positioned.