A pause in the melt-up? – Humble Student of the Markets

Mid-week market update: Is the market about to pause in its run-up? The latest development from Hong Kong may serve as a catalyst. In the wake of the passage of the Senate bill affirming support for the Hong Kong protesters, the bill will have to be reconciled with a similar House version, where it will arrive on President Trump`s desk for signature. China has already denounced the bill as unwarranted interference in its internal affairs. There is a chance that Trump will view it as leverage in the latest round of “Phase One” negotiations. No wonder the PredictIt odds of a Trump-Xi meeting, which is a proxy for a deal, is tanking. 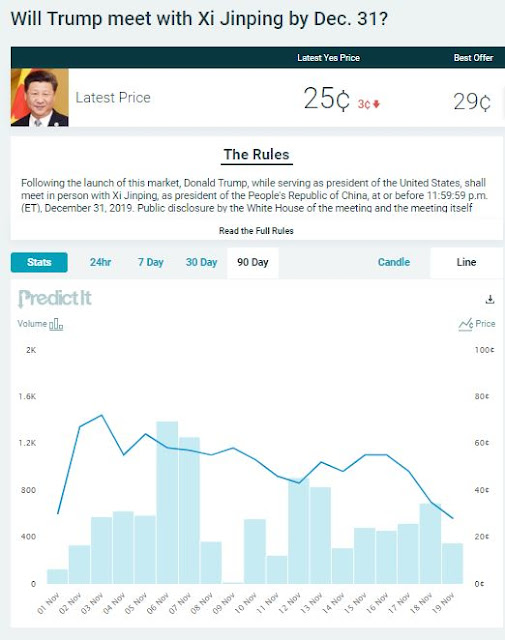 A more liquid contract, the offshore yuan, has also been weakening. This is another indication that the market’s expectations of a “Phase One” deal is facing. 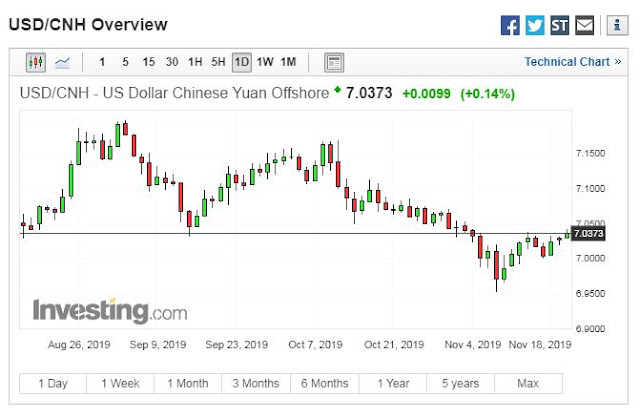 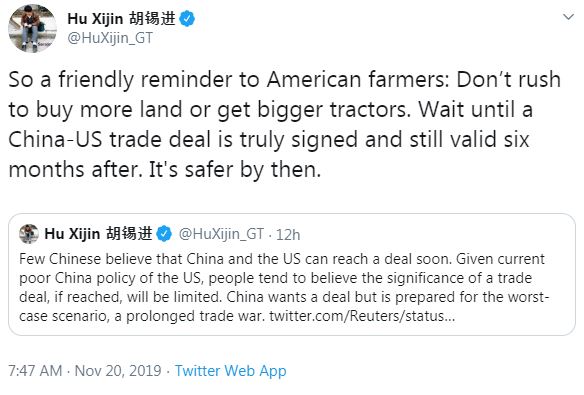 Is the prospect that an unraveling trade deal enough to spook the stock market?

There have been plenty of technical warnings everywhere. The start of market melt-ups are generally characterized by breadth thrusts. This time, we are seeing signs of negative breadth divergence. Even as the market made new highs this week, net new highs were declining, and so was NYSI. 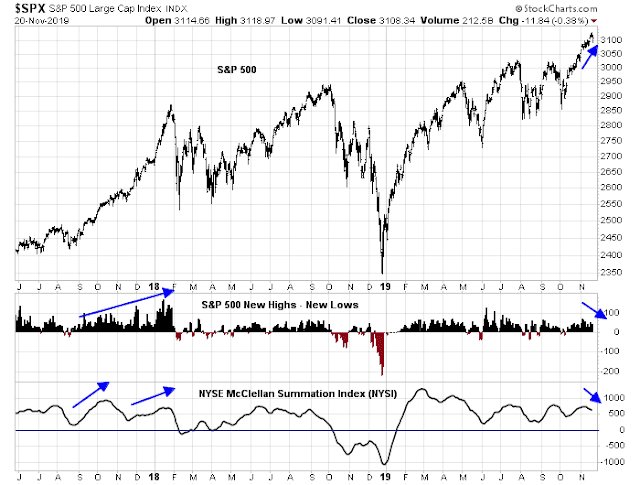 Cross-asset, or inter-market, analysis also reveals a picture of waning risk appetite. The relative price performance of high yield (junk) bonds to their duration-equivalent Treasuries is not confirming the new highs.

In addition, Macro Charts is becoming increasingly anxious in the short run. His Speculative Trading Model is wildly overbought, and it “has correctly warned of tactical pullbacks – even within strong uptrends”. 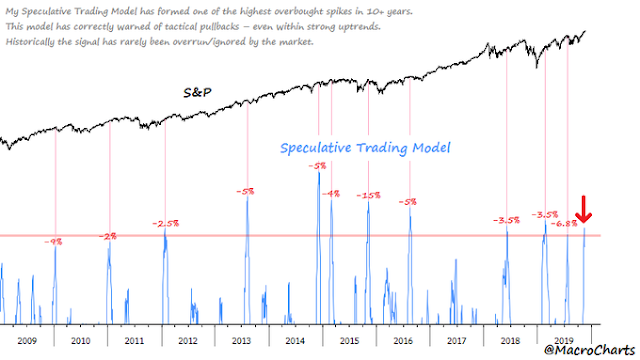 In a separate tweet on Monday, he pointed out that SPY and QQQ DSI had exceeded 90, but he did allow that the market did not necessarily pull back immediately and took time to roll over. 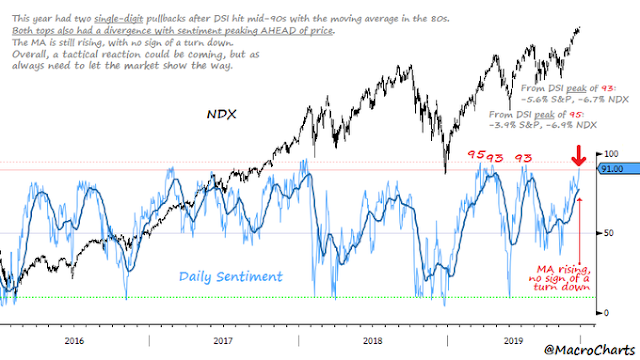 My own market based sentiment indicators are flashing warnings of complacency. The VIX is nearing its lows for this year; the Bollbinger Band of the VIX has tightened, indicating a possible volatility storm ahead; and the 10 day moving average of the equity-only put/call ratio has dropped to historical lows. 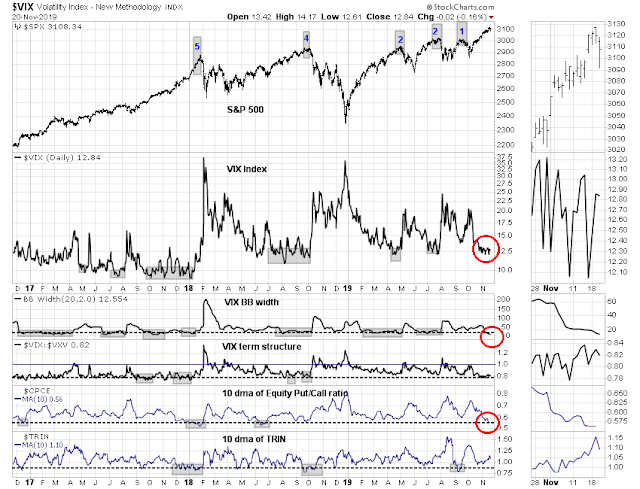 Before everyone gets excited, keep the following in mind. The SPX remains in a uptrend, and there is no reason to become tactically cautious until the trend line breaks. In addition, there is strong support at 3025-3030, which is the breakout level and represents a peak-to-trough pullback of about 3%. I will leave it up to the reader whether a 3% downdraft is worthwhile trading.

“There’s something special about this year. We had a positive move in the market in both January and February,” Stovall said on Thursday. “February is the second worst month of the year — second only to September. It’s usually a digestive month.”

If history is any guide, the Santa Claus rally is just getting going:

Stovall points to another unusual characteristic of the year’s record run: Stocks hit highs this month, too.

“Throw in a new all-time high in early November and you’re essentially flat to higher 11 of 11 times,” he added.

I interpret these conditions as the market is in a strong uptrend, but it is in need of a breather to consolidate its gains. While I have no idea of whether it is likely to go down tomorrow, or the next day, the short-term bias is down, but downside risk is likely to be limited to 2-3%. My inner investor remains bullishly positioned, but he selectively sold some covered calls against existing positions.

Subscribers received an email alert this morning about possible action in my trading account. I wrote that if the index were to convincingly violate the 3115 level on a closing basis, I would sell my long position and move to cash. The sell signal was triggered, and my trading account is now 100% cash.