BLS will be publish the September Jobs Report this Friday. This report will be important for a number of reasons, and it will answer some key questions for investors and policy makers.

First, the unemployment rate has been troughing. If history is any guide, a rising unemployment rate after a trough has been signals of recessions. This was documented in the Sahm Rule, which was developed as a way to trigger automatic stabilizers and a real-time recession signal. 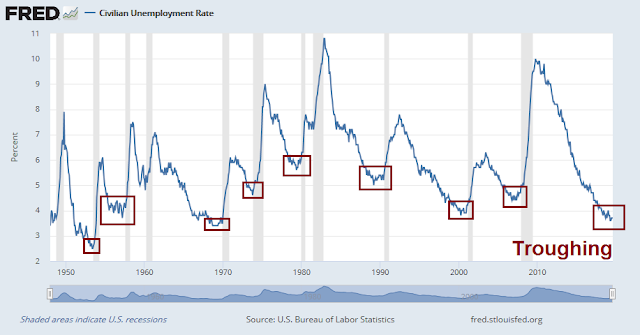 The Sahm Rule triggers a signal “When 3-month moving average national unemployment rate exceeds its minimum over previous 12 months by 0.5 pct points”. A similar technique is also used at iMarket Signals as a recession warning. Currently, there is no recession in the forecast.

Besides the headline Non-Farm Payroll and Average Hourly Earnings releases, a number of internals in the report have been useful leading indicators. In the past, temporary jobs and the quits to layoffs ratio, which is contained in the JOLTS report that is released next week, have led NFP growth. Temp job growth have been plateauing. The August report showed a temp job growth of 15K, but that was boosted by census hiring of 25K. I will be watching the September report for signs of weakness. In addition, the quits to layoffs ratio edged down in July, which may also be a sign of a slowing jobs market. 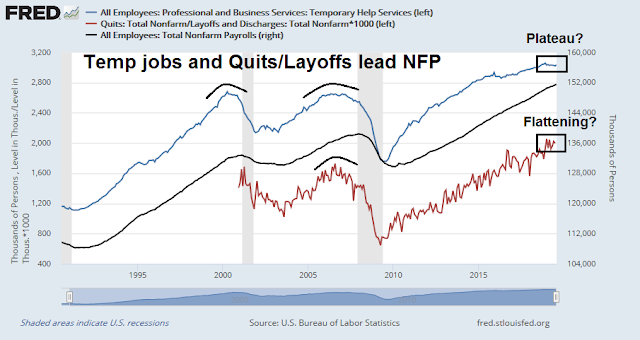 Here are the bull and bear cases. New Deal democrat observed that initial jobless claims continue near expansion lows and there are no signs of consistent weakness. The jobs market may be near or at a plateau, but the expansion is continuing.

On the other hand, Nordea  Markets pointed out that the employment components of both the manufacturing and services PMI have been weak, which is indicative of a weak NFP report. 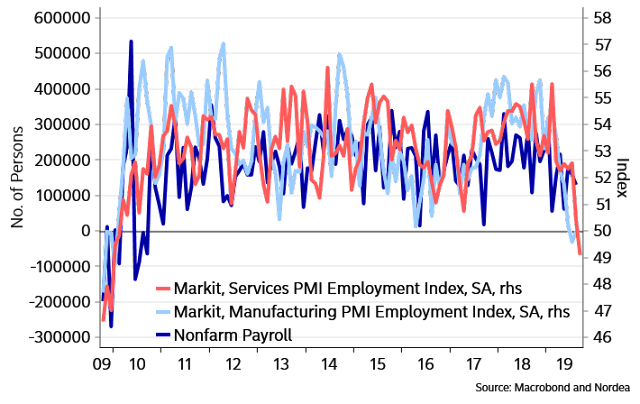 As for me, I use a simplistic rule of monitoring the initial jobless claims report during the NFP survey week to see if initial claims beat or missed expectations. Initial claims came in low, or beat expectations, during the September NFP survey period. I therefore expect a strong than expected headline print. The internals, such as temp jobs, is another matter that I will have to examine at the time of the report.

If my simple model is correct, and we do see a better than expected NFP print, the report will further push the Economic Surprise Index upwards. The combination of continuing positive economic surprises, and a stronger than expected jobs market will serve as ammunition for the hawks within the Federal Reserve to delay the timing of a rate hike cut at the next FOMC meeting. 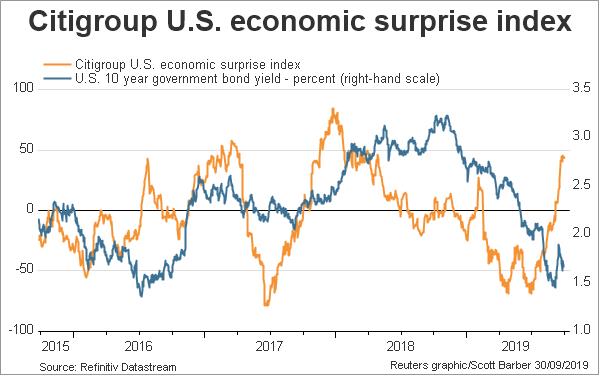 In that case, watch for bond yields to rise.