A (deceptive) long-term buy signal – Humble Student of the Markets 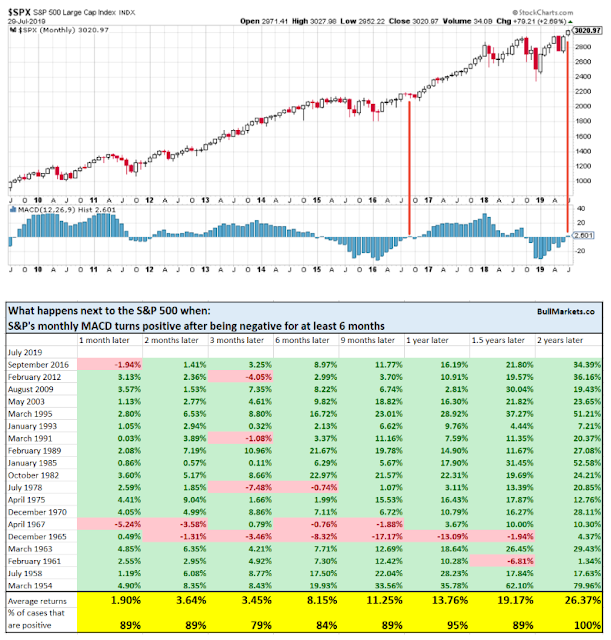 The verdict is in, the index has flashed a long-term MACD buy signal. 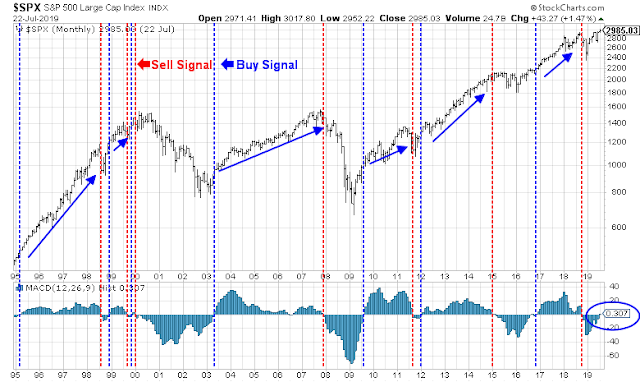 While the signal is constructive for the long-term outlook, let me temper your enthusiasm.

The SPX buy signal has not been confirmed by other indices. I found that the monthly MACD buy signal works slightly better when applied to the broader Wiltshire 5000 (WLSH). WLSH did not confirm the buy signal. 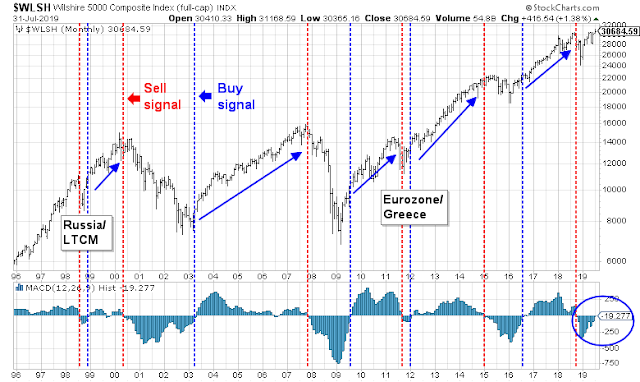 As well, the buy signal was not confirmed by the even broader global index. 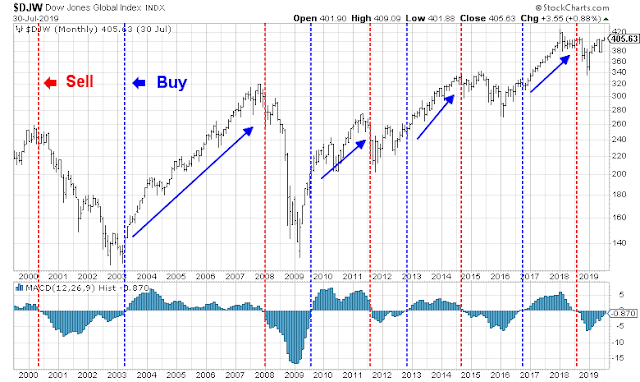 I was correct when I suggested earlier in the week that the Fed might enact a hawkish cut (see A hawkish cut ahead?). Powell corrected market expectations by stating that the quarter-point cut was a mid-cycle policy adjustment, and not the start of a rate cut cycle. He did, however, hold out the possibility of further cuts, which will be dependent on incoming data.

The appearance of two dissenters to the easing decision, by KC Fed president Esther George and Boston Fed president Eric Rosengren, were signs that the FOMC is highly divided. The bar to further cuts will be high, and new data will have to deteriorate significantly for the Fed to cut further.

In response to the FOMC decision, the 2s10s yield curve flattened dramatically, indicating expectations of slower growth. Stock prices also adopted a risk-off tone. The SPX breached a short-term uptrend, indicating the bulls had lost control of the tape, and briefly tested secondary support at about 2950. In addition, the VIX Index rose above the top of its Bollinger Band (BB), which is an indication of an oversold condition. Past BB breaches have been resolve with a quick recovery, and more prolonged VIX spikes that were associated with deeper pullbacks, and it is unclear how the latest episode will turn out. 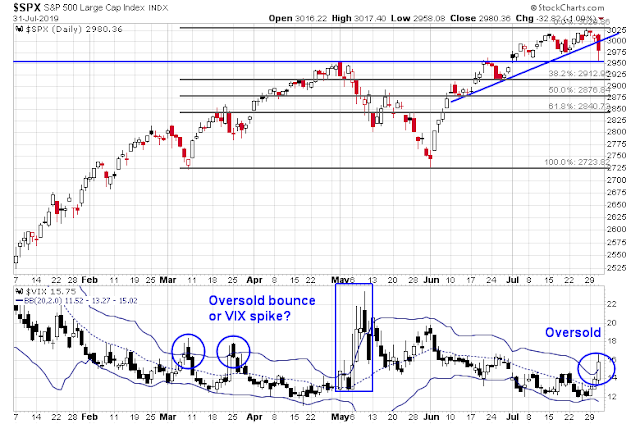 Troy Bombardia also studied what happens after the Fed cuts rates when the market is near an all-time high. It did not perform well over the next month, but longer term returns have been positive. 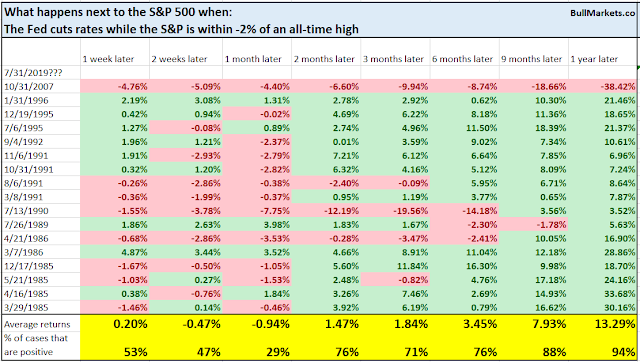 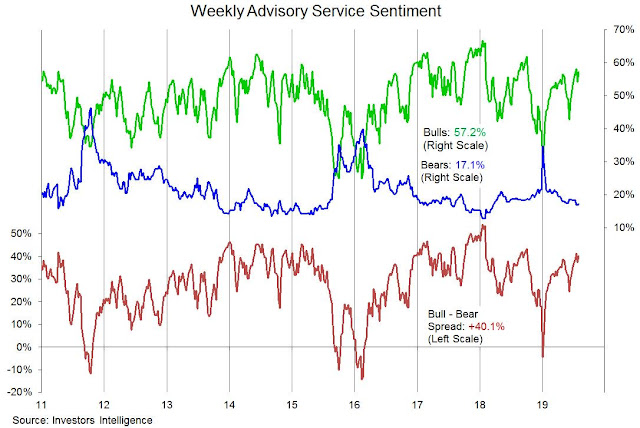 NASDAQ stocks have been the leadership in this latest rally, and NDX DSI is also somewhat stretched. 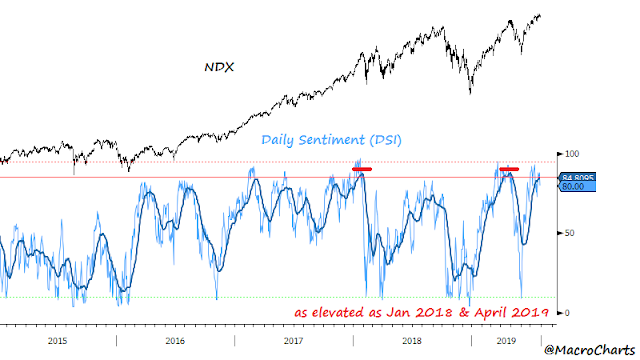 Should stock prices weaken, the risk of a deeper pullback is high. The equity position of trend following CTAs and risk parity funds are at a crowded long reading. Any sustained retreat could see a stampede for the exits as these systematic strategies unwind their long positions. 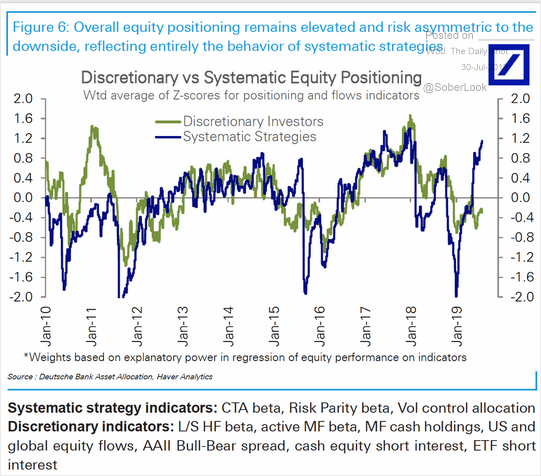 In addition, the months of August and September have been seasonally weak for equities.

My inner investor continues to be constructive on equities. He is neutrally positioned, and he is waiting for confirmation of the monthly MACD buy signal from broader indices like WLSH.

My inner trader is short. Any pullback is likely to be relatively shallow. Initial SPX support can be found at about 2950, with additional support at about 2910.