The limits of central bank powers – Humble Student of the Markets

With interest rates at or close to the zero lower bound, here are a couple of examples of limits to the power of central bankers.

Will the Fed cut rates?

Let us begin with the Fed. After the blow-out Jobs Report, the bond market reacted violently and there were murmurs as to whether the Fed will still cut rates. Let me lay the first concern to rest. Historically, the Fed has telegraphed its interest rate decisions. With the market expectations of at least a quarter-point cut at the next FOMC on July 30-31, the Fed is unlikely to surprise the market. 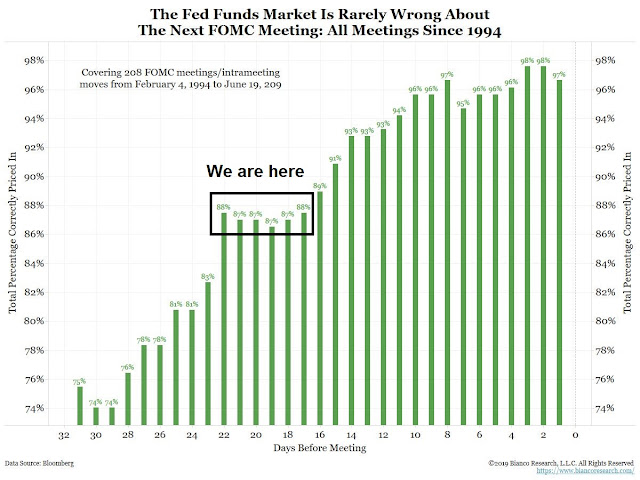 I would also note that Fed officials had cited US and global weakness, as well as uncertainty from trade tensions as the reasoning for an insurance rate cut. There has been no mention of labor market conditions as a justification.

That said, the very strong June Non-Farm Payroll print offset the weakness in the previous two months. Year/year NFP growth has been remarkably stable and range-bound during this expansion. The latest June update shows an average monthly gain of 192K. 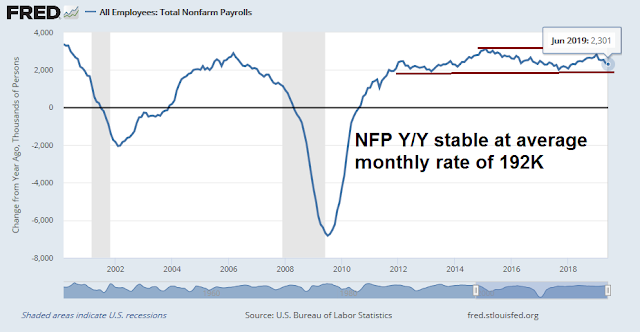 In addition, wage inflation appears to be moderating, along with core PCE, which is the Fed’s favorite metric of inflation. This will give ammunition to the doves despite the strength of the headline NFP figure. 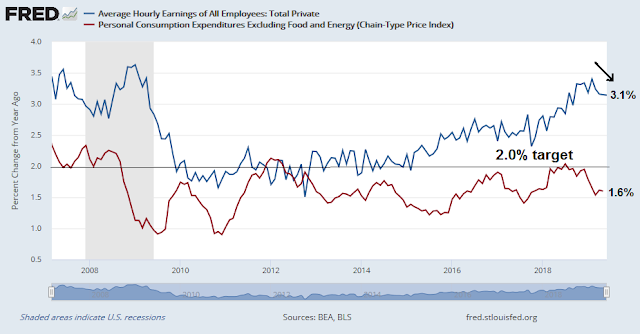 If the Fed were to make a mid-course correction to guide expectations, there is plenty of opportunity this week for Fedspeak. Powell is expected to speak Tuesday morning. Other important Fed speakers include vice chair Quarles and Boston Fed president Bostic (Tueday), Powell’s Congressional testimony (Wednesday and Thursday), and New York Fed president Williams (Thursday).

As Powell has pointed out, there are limits to what a central bank can do. The global economy is undergoing a period of softness, and he has no control over trade policy, which affects business confidence. 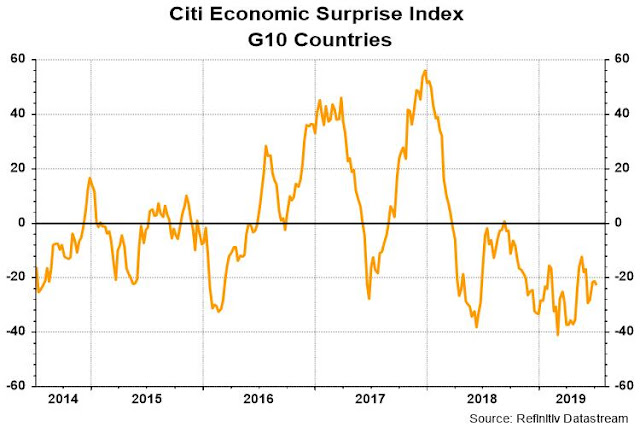 My personal view is market expectations of a rate cut cycle has become overdone. While the Fed is likely to cut at its July meeting, it is likely to signal a hawkish cut. We may see expectations change to once-and-done, or the Fed’s message moderate back to a “patient” and “data dependent” stance as part of its FOMC statement.

Paying the price of “whatever it takes”

Mario Draghi once said that the ECB would do “whatever it takes” to save the euro. It has largely been successful. The ECB unveiled an alphabet soup of programs to buy member states time to enact structural reforms. While the reform efforts have been mixed, risk premiums have shrunk dramatically. To illustrate the success of the “whatever it takes” commitment, Greek 5-year debt is roughly 0.7% below equivalent USTs. 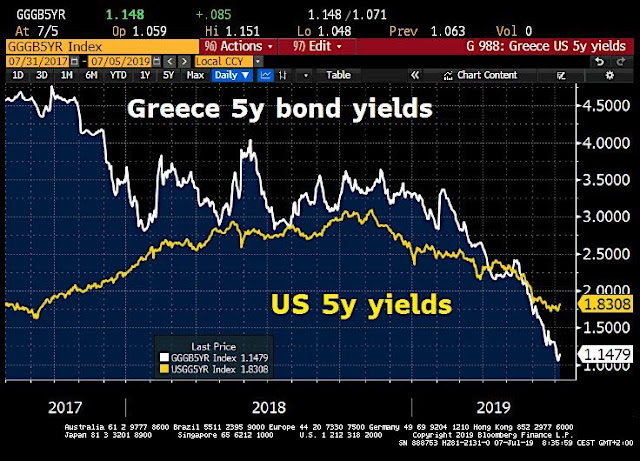 There is one key difference between the Fed and the ECB. The Fed has operated under a dual mandate of “promote effectively the goals of maximum employment, stable prices, and moderate long term interest rates”. The sole mandate of the ECB is to fight inflation. Since inflation is falling rapidly in the eurozone, the only ECB policy option open is more monetary easing, which has pushed rates into negative territory.

There is a price for this policy, and it is being paid by the European banking sector. Over the weekend, Deutsche Bank has announced yet another restructuring plan. It is creating a “bad bank” and it is exiting the glonsl equity business.

The damage is not just limited to Deutsche Bank, but the entire sector. The chart below shows the performance of the sector against yields. While correlation does not equal causation, you get the idea. 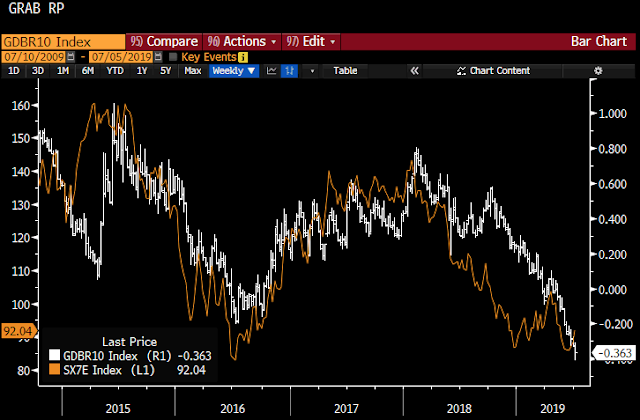 With rates this low, or even negative, European banks are experiencing difficulty achieving profitability in their home markets. Consequently, they go out in the risk curve to chase after yield. Eventually, something has to give. The latest blowup saw Turkey’s President Erdogan fired the head of the central bank, which tanked the Turkish lira. Turkey has enormous amounts of USD denominated debt that it can’t service, which Spanish banks have excess exposure to. Just take a look at BBVA, which is just one example of problematical Spanish bank. 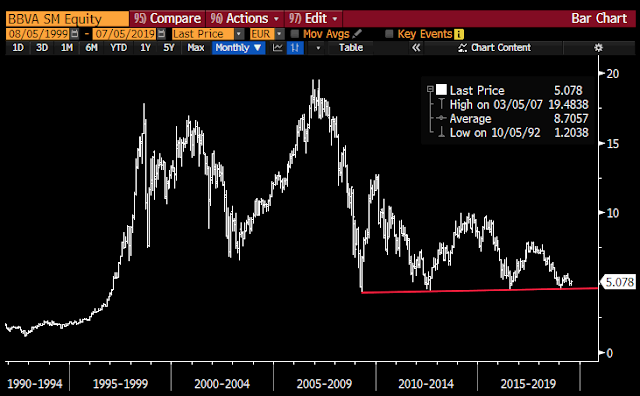 While Draghi’s “whatever it takes” commitment was an effective backstop to past problems in the eurozone, the ECB’s programs represent only a band-aid solution, and it illustrates the limits of the powers of central banking. In order to revive growth, Draghi has pleaded with member states with the fiscal room (read: Germany) to embark on fiscal stimulus. Right now, the region’s fiscal thrust is being led by Italy, which is one of the weakest economies. 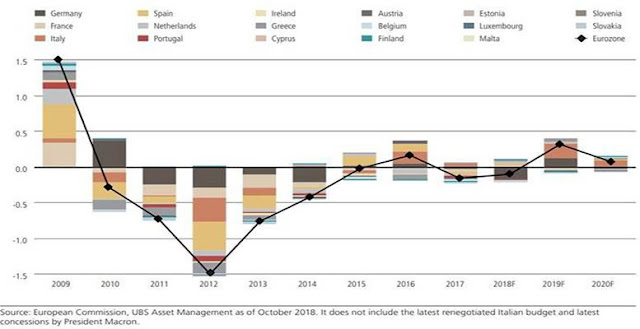 Despite Germany’s cultural bias against debt, it is in her interest to embark on some fiscal stimulus, especially when rates are negative. German exports account for roughly half of GDP, and about 40% of its exports go to other eurozone countries. Fiscal stimulus therefore benefits the entire euro area’s growth outlook in a very direct way. 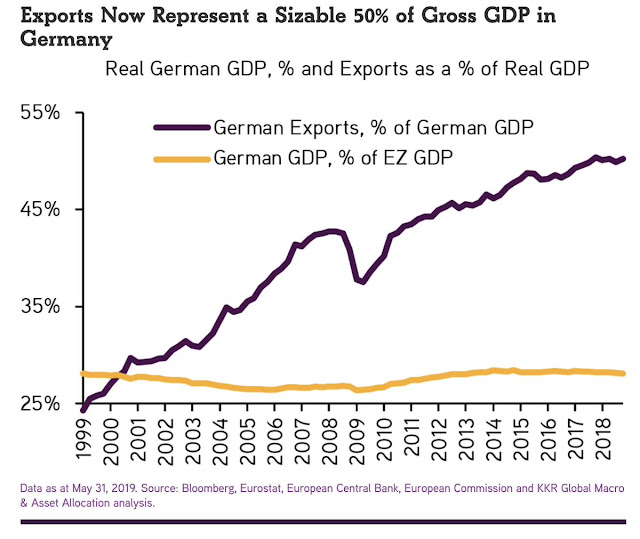 This is the part where the ECB is handcuffed as a monetary authority. Fiscal policy has to pull its weight. The appointment of Christine Legarde to be its head is a positive step for the region. To be sure, Lagarde is not an economist, but a lawyer and a politician. It will take a politician to finesse German recalcitrance against fiscal stimulus and greater fiscal integration to rescue Europe.

In addition, Bloomberg reported that the appointment of German defense minister Ursula von der Leyen to head the European Commission is also another step towards greater European integration, which includes fiscal integration. While von der Leyen is ostensibly German, she is really Macron’s candidate to head the EC:

Her immediate priorities may include promoting cutting edge digital technology and opening Europe’s economy to artificial intelligence, both issues close to Macron’s heart. But the archives suggest a deeper shared vision.

At the height of the euro crisis in 2011, many Germans were ready to expel Greece from the euro zone. Von der Leyen instead called for a “United States of Europe” to complete, rather than reverse, the process started by monetary union.

The idea of a federal superstate is taboo in these days of Brexit and populism. But the frustrations of a system where 28 states have a de facto veto were as apparent as ever in the struggle to choose a commission president just as in numerous decisions each year.

So the idea of full political integration is still out there, lurking unspoken in the background of Macron’s plans for a European tax system and a European army.

These steps are all different scenes in the grand stage of European Theatre. While the European Central Bank can play a leading role, it cannot be the only player, and there are limits to what a central bank can do.

8 thoughts on “The limits of central bank powers”