A May Jobs Report preview – Humble Student of the Markets

Tim Duy thinks that Trump is trying to weaken the economic outlook sufficiently so that the Fed has no choice but to cut rates. The markets adopted a risk-off posture as a consequence of Trump`s announcement that he plans to impose tariffs on Mexico. The entire Treasury yield curve, with the exception of the very long end at 30-years, is at or below the Fed Funds target rate. The market is now anticipating between two and three quarter point rate cuts by the end of 2019.

The story here is that market participants anticipate the Fed will need to cut rates to maintain the expansion. The Fed has so far resisted this story, but the odds favor them moving in this direction. The simple fact is that the Fed reacts systematically to a changing forecast. Financial markets are signaling the the growth forecast will worsen enough, or that the risks to the growth forecast will become sufficiently one-sided, that the Fed will have to act. The Fed isn’t there yet, but they will not be able to resist forever.

Bottom Line: Trump will get the Fed to back his trade wars, but only threatening to damage the U.S. economy first.

I’d like first to say a word about recent developments involving trade negotiations and other matters. We do not know how or when these issues will be resolved. We are closely monitoring the implications of these developments for the U.S. economic outlook and, as always, we will act as appropriate to sustain the expansion, with a strong labor market and inflation near our symmetric 2 percent objective.

Last week, Clarida repeated the now familiar Fed official party line that the “economy is in a good place”. Bloomberg reported that Clarida left the door open to a rate cut:

“Let me be very clear, that we’re attuned to potential risks to the outlook,” he said Thursday after a speech to the Economics Club of New York. “If we saw a downside risk to the outlook, then that would be a factor that could call for a more accommodative policy. So that’s definitely something in the risk-management area that we would think about.”

Clarida said that mounting risks, not just disappointing incoming economic data, could be a trigger for the Fed to cut rates if it felt the need to act preemptively, with inflation already below the central bank’s 2 percent target. The Fed’s preferred price index, minus food and energy, rose 1.6% for the 12 months through March, and analysts expect the same number from the April report due Friday.

The upcoming Jobs Report this Friday will also be an important data point for Fed officials as the pressures builds for rate cuts.

Since the Easter break, initial jobless claims have risen from multi-decade lows to over 200K, indicating that the weakness is not a data blip. This is an important consideration for investors, because initial claims (inverted scale) have seen a high level of inverse correlation to stock prices. 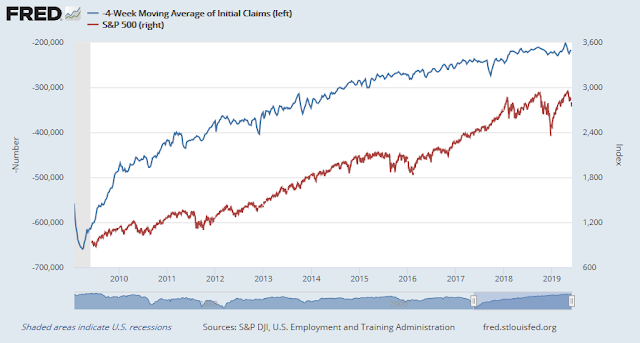 History also shows that changes in initial claims have either been coincidental or led changes in the unemployment rate. 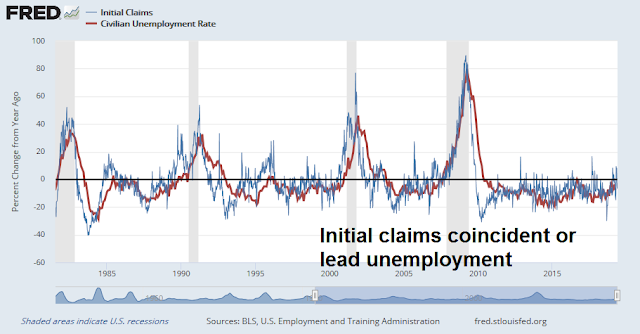 Based on the recent weak experience in initial claims, I would therefore take the “under” on the Non-Farm Payroll consensus of 185K jobs. My own estimates indicates the May unemployment rate will rise to 3.7% from 3.6% in April.

Weakness in employment has important implications for Fed policy makers. There will be more discussions about the so-call Sahm Rule, which was named after Fed economist Claudia Sahm, and it was proposed as a way of calling economic slowdowns in real-time as a way to trigger fiscal automatic stabilizers. The Sahm Rule for predicting recessions is “when 3-month moving average national unemployment rate exceeds its minimum over previous 12 months by 0.5% points”. A rise in unemployment rate will be the another step in raising recession anxiety, especially in light of the partial yield curve inversion.

In addition, Fed policy makers will also be considering a paper entitled “How tight is the labor market?” by Abraham and Haltiwanger presented at the Chicago policy conference proposes a new summary indicator for the labor market.

A complementary approach is to think about unemployment within the framework of search and matching in the labor market. Rather than being pinned down only by its influence on wage and price inflation, unemployment also is pinned down by the constraint that, in steady state, the rate at which new job openings are created must equal the rate at which people are hired into previously vacant jobs. This constraint provides additional information that can be used to identify the natural rate of unemployment.

The researchers conclude that the current labor is tight, but it is not as tight as previously thought based on conventional analysis.

My own heuristics, based on temp job growth and the quits to layoffs ratio that have historically led NFP, suggest few signs of labor market weakness. However, I expect to see some signs of downside surprise in the May report. 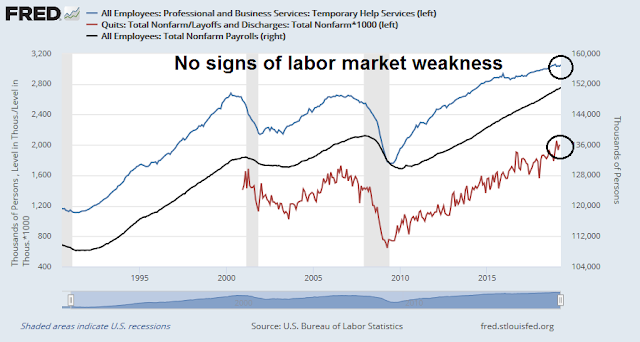 It will be useful to see how the market reacts. Will bad news be bad news (risk-off because of economic weakness), or good news (risk-on as it anticipates Fed rate cuts)? More importantly, will the yield curve steepen or flatten?

3 thoughts on “A May Jobs Report preview”