Buy, or fade the breakout? – Humble Student of the Markets

Mid-week market update: The market strength this week was no surprise to me based on my seasonal analysis I published on the weekend (see Will a volatility collapse lead to a market collapse?). Last week was option expiry (OpEx) week, and OpEx weeks have historically been bullish for stocks. In particular, Rob Hanna at Quantifiable Edges found that April OpEx week was one of the most bullish ones of the year.

However, last week saw the SPX edge down -0.1%, and my own analysis found that April post-OpEx weeks that saw market declines tended to experience strong rallies (red bars). By contrast, the market had a bearish tilt after strong April OpEx weeks (green bars). 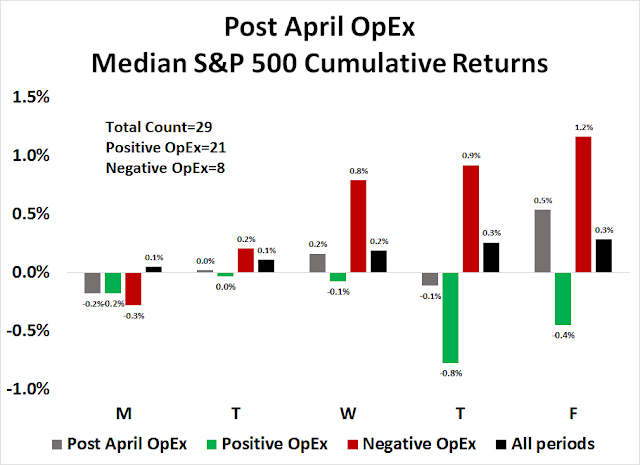 This historical study was conducted from 1990, and the sample size of losing April OpEx weeks was relatively small (N=8). Here is the same analysis for all post-OpEx weeks. The conclusion is the same. Strong OpEx weeks were followed by market weakness, and vice versa, though the magnitude of the effect was not as strong. 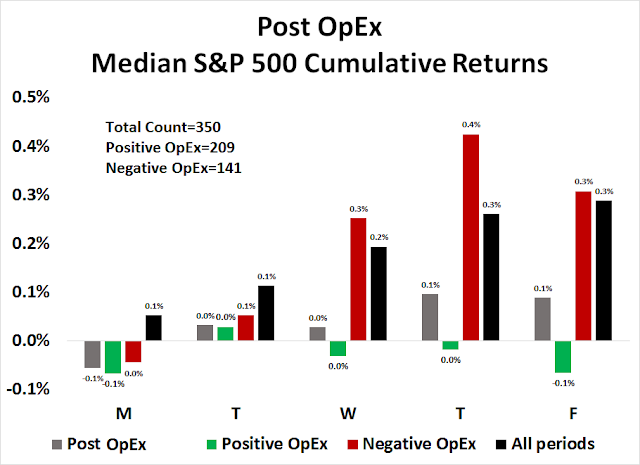 Could this week’s upside breakouts of the major indices be attributable to an OpEx effect? If so, could the breakout be a fake-out?

A number of cautionary signals are appearing. The Daily Sentiment Index (DSI) is highly elevated, indicating an overbought market (but you knew that). 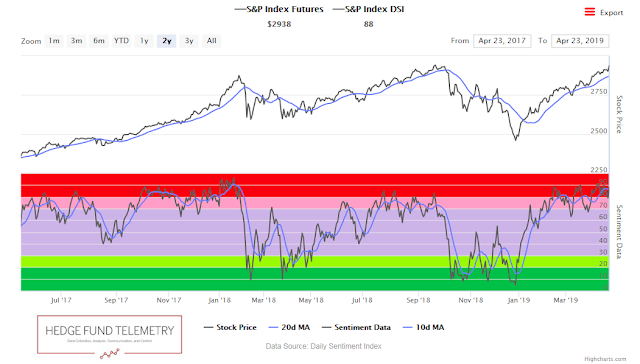 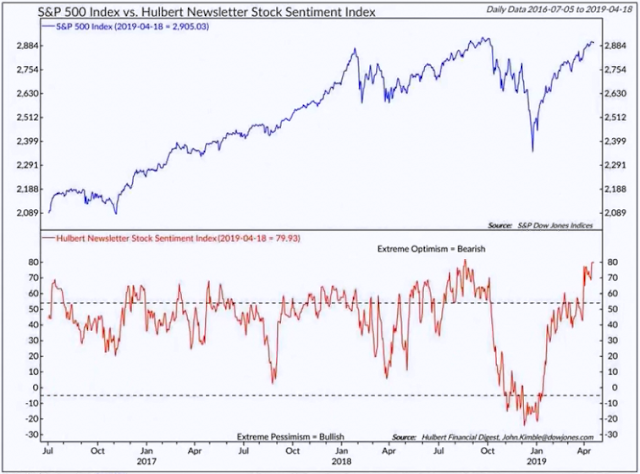 I would highlight a caveat for traders. Sentiment models tend to behave very differently at market bottoms and tops. While sentiment signals are good actionable at bottoms because bottoms tend to be panic driven, they don’t behave in a similar fashion at market tops as overbought markets can stay overbought for a long time.

In fact, turning cautious as the market makes all-time highs feels like standing in front of a freight train. It is said that there is nothing more bullish than a market making a fresh high.

Here is a different take on market breadth that is supportive of the bull case. Conventional breadth analysis uses the generals and troops analogy. If the large cap indices (generals) are leading the charge, but the equal weighted or small cap indices (troops) are not following, then that is a negative divergence which warrants caution. However, divergences can take a long time to play out, and signals have historically not been actionable. 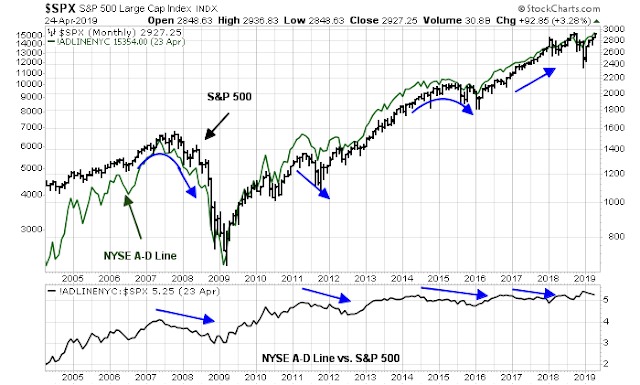 I can turn that around in a different way. In the short run, I am watching the performance top five sectors in the index, which represent just under 70% of index weight, for clues to market direction. If these heavyweights (generals) are all performing well, it doesn’t matter what the smaller weights (troops) do, the market is going higher.

As the chart show, two of the top five (Technology and Consumer Discretionary) have staged relative performance upside breakouts. The relative performance of Financial stocks has historically been correlated with the 2s10s yield curve, and they should improve as the yield curve has steepened. Communications Services are performing in line with the market, but the sector is improving. Healthcare, which had been dragging down the market, has stabilized and appears to be trying to find a bottom. 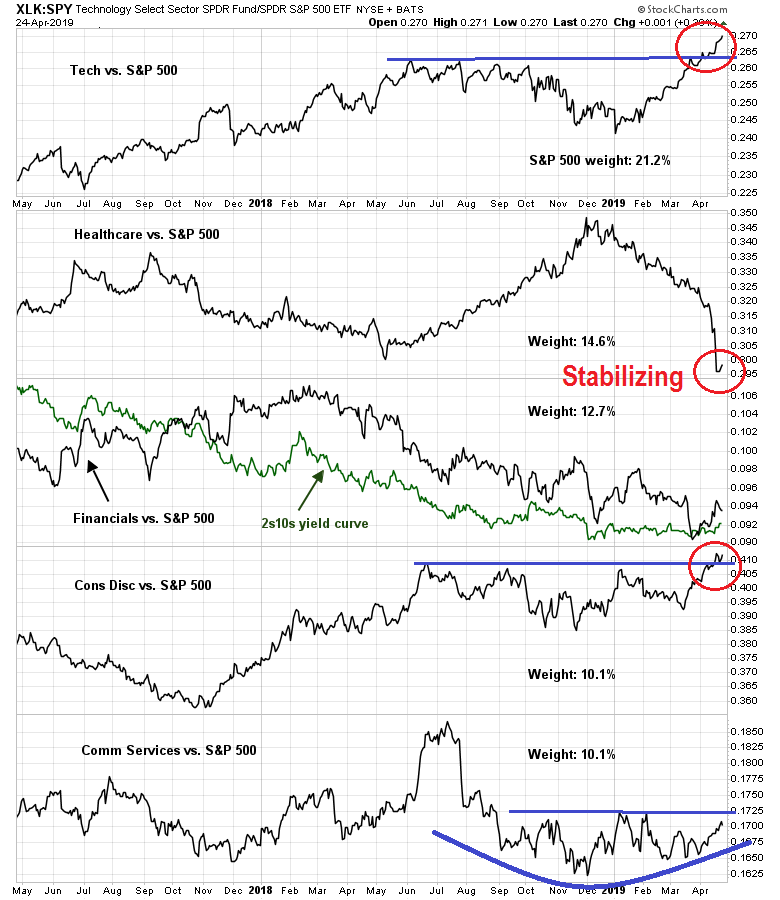 In short, the top five sectors are either strong, or showing signs of strength. None are laggards, which should be supportive of further gains.

In the short run, the US equity market should continue to grind up as long as sentiment doesn’t become overly exuberant. The market has been rising on a series of “good overbought” conditions on short-term RSI-5 momentum (top panel). It has paused or staged minor corrections whenever it became overbought on intermediate term RSI-14 momentum, or tested the top of its rising uptrend line. If this behavior can continue, stock prices can rally to further new highs. 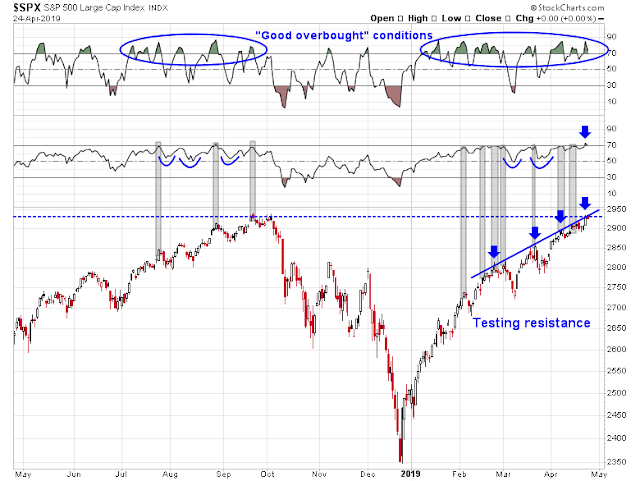 I would be more concerned if it were to stage an upside breakout through the rising uptrend, and RSI-14 becomes more overbought. That would be a signal of excessive giddiness to sell into.

My inner investor remains overweight equities. My inner trader is also bullish. He took some partial profits on his long positions when the market hit the rising resistance line yesterday, and he is prepared to buy more on a pullback.

9 thoughts on “Buy, or fade the breakout?”