A “green shoots” rally ahead? – Humble Student of the Markets

Mid-week market update: Even as the slowdown gloom overtook the market in the past few weeks, stock prices did not break down. Now, the storm seems to be passing as green shoots of growth are starting to appear.

For equity investors, the most notable change was the reversal in forward 12-month EPS estimates, which bottomed and begun to rise again. This is an indication of the return of bullish fundamental momentum. 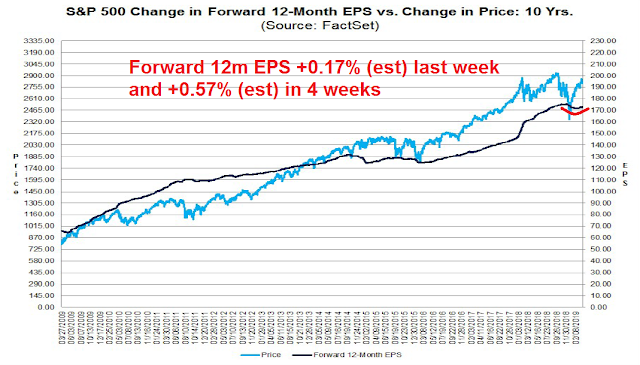 The combination of an unexpected growth turnaround and excessively cautious positioning is sparking a “green shoots” risk-on rally.

Thanks to weakness from abroad, and the briefly inverted yield curve, there’s a lot of anxiety about recession risk. So it was not surprising to see stocks surge on a day like yesterday [Monday], when we got decent Chinese data, and a U.S. ISM report that was solid all around.

Amidst all of the gloom about a deceleration in Chinese growth, Beijing’s stimulus efforts began to pay off when both China’s official PMI and Caixin PMI prints rose and beat expectations. 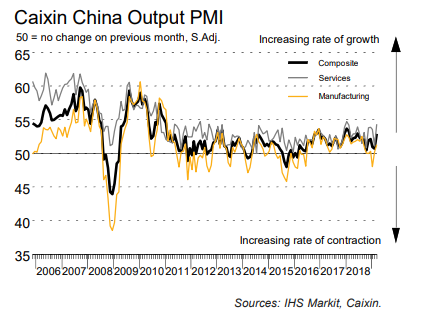 The strength was not just isolated to China. ASEAN PMI rose as well, which reflects strength across the entire region. 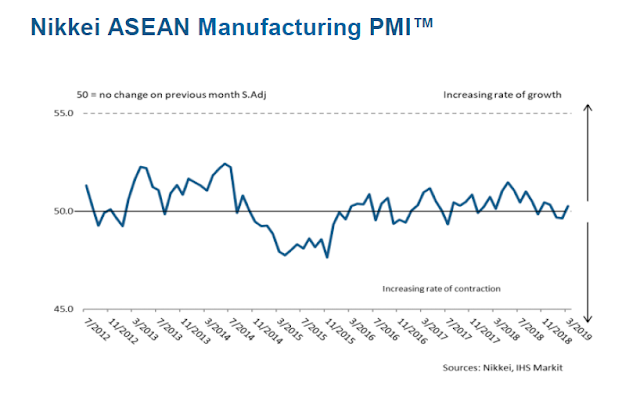 Combine those upbeat releases with an upside surprise in ISM Manufacturing, and the “green shoots” thesis is complete. 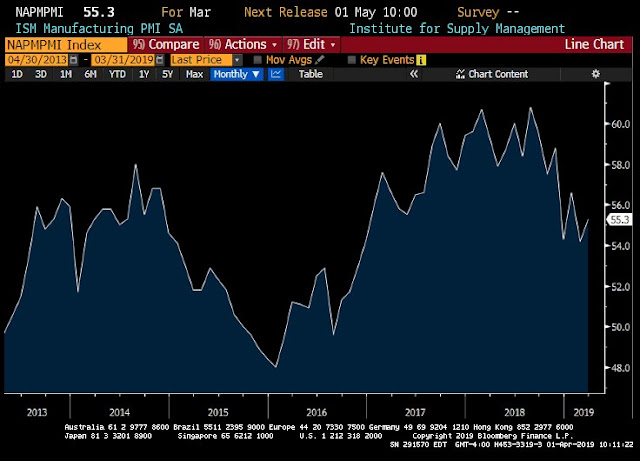 Short equities is the pain trade

On top of that , surveys of institutional positioning shows that managers have been overly defensive going into this turnaround, and you have the ingredients for a pain trade. The latest BAML Fund Manager Survey shows that global managers’ equity weights are historically low. 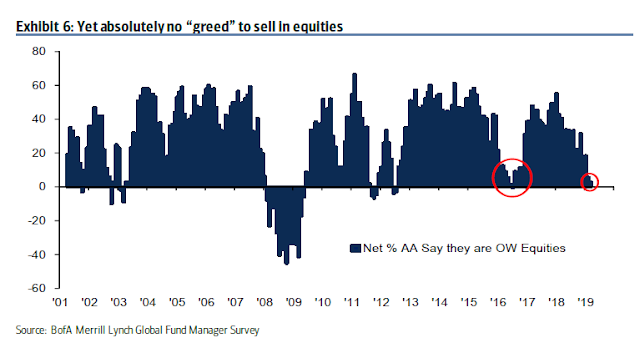 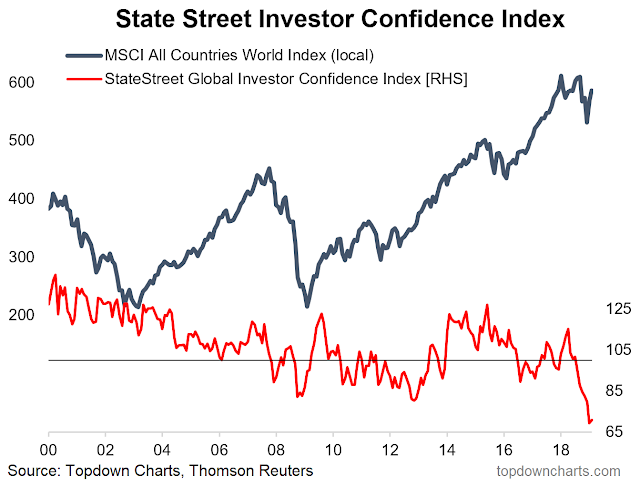 For some perspective of the differences in sentiment and market positioning, compare the recent surge in global bond prices… 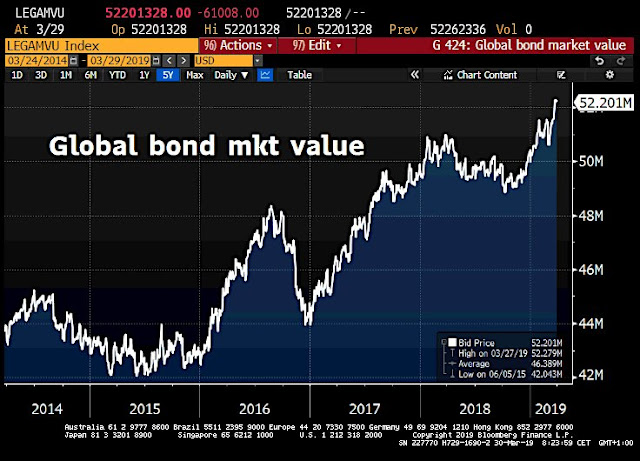 …to global stock prices, and you get the idea. 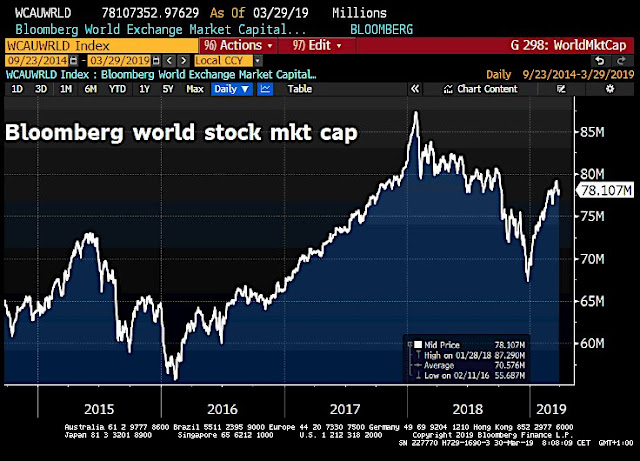 Notwithstanding the fact that bonds have rallied harder than stocks, analysis from JPM shows that implied recession risk has fallen considerably across most asset classes, which is another bullish sign. 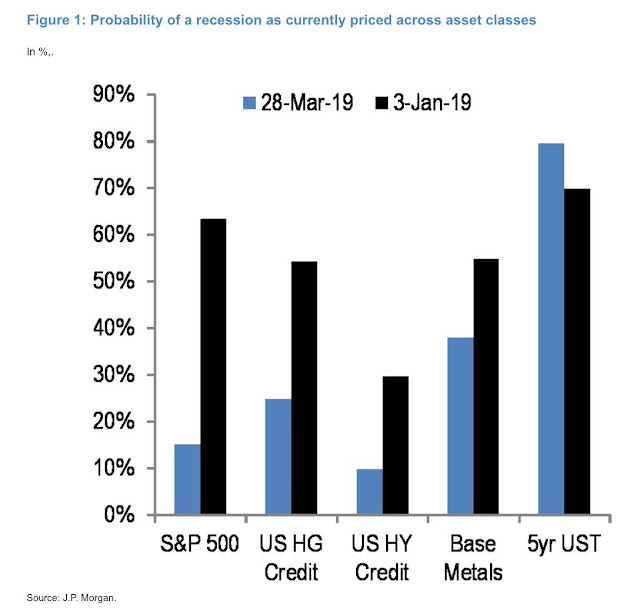 If we were to see evidence of a sustained turnaround in fundamentals, there is a distinct possibility of a FOMO rally that could take the major market indices to fresh highs.

There are, however, a number of key risks to my bull case. Large speculators are in a crowded short in VIX futures. Short positioning is more extreme than it was just prior to the market selloff in Q4 2018. This sets up the potential for a VIX rally, and stock market drop. 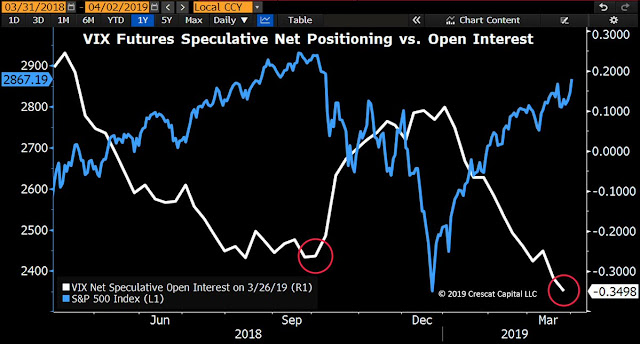 The market is also subject to the event risk of Trump’s threat to close the Mexican border. Notwithstanding the fact that America would run out of avocados in 2-3 weeks, US-Mexico trade amounts to about $1 million per minute per day, 365 days a year. Closing the border would devastate GDP growth, and stock prices. This story may turn out to have the ups and downs of the China-US trade negotiations, or the impasse that eventually led to the partial government shutdown.

The market has become overbought from a short-term tactical perspective. Hourly RSI-5 recently exceeded 90. If the past is any guide, the market will either consolidate sideways or pull back for a couple of days. If the index were to correct, a logical downside target would a gap fill at about 2835-2848. 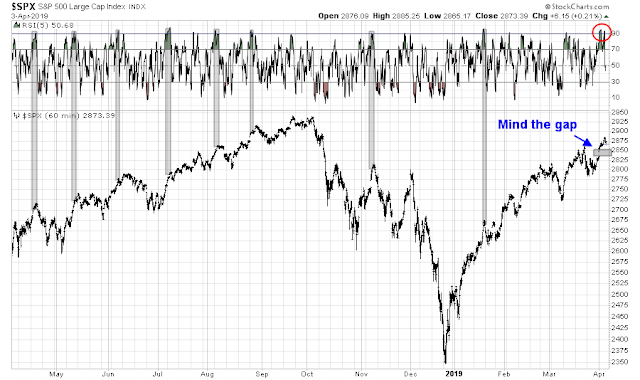 My inner investor is bullish and slightly overweight equities. My inner trader is also bullish, and he is prepared to take advantage of any weakness to buy.

4 thoughts on “A “green shoots” rally ahead?”