Bullish or bearish? What’s your time horizon? – Humble Student of the Markets

Mid-week market update: The midterm election performed roughly as expected. The Democrats regained control of the House, and the Republicans held the Senate and even made some gains. Is this bullish or bearish for equities? It depends on your time frame.

Here is my outlook from a strictly chartist’s viewpoint, starting with the long-term to the short-term.

From a very long-term perspective, the negative monthly RSI divergence and MACD sell signal is too worrisome to be ignored. These conditions suggest that the market is making a broad-based top. 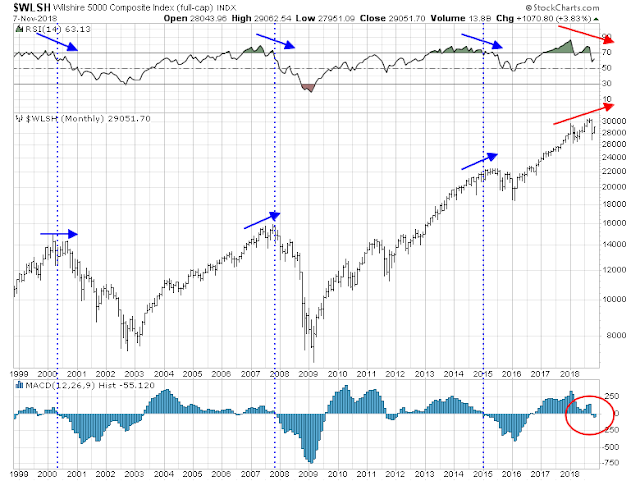 The latest MACD sell signal is unlikely to be resolved with a minor 2015 style correction. The technical breach of the relative performance of bank stocks, which was accompanied by a similar relative support violation of the regional banks, is another warning that a major decline is under way. 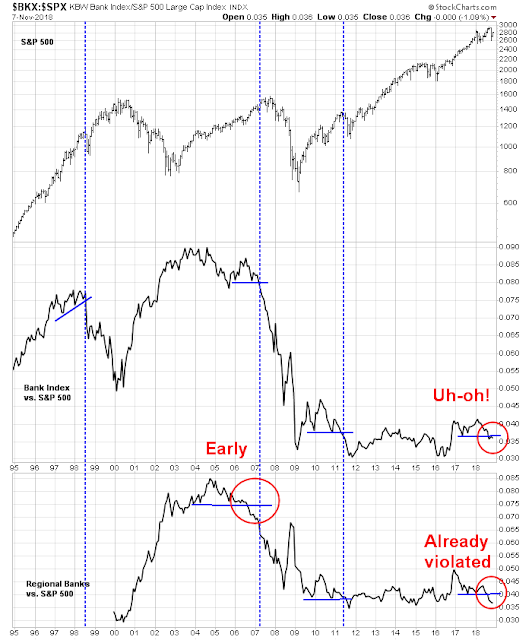 That said, nothing goes up or down in a straight line.

Prepare for the year-end rally

However, intermediate-term indicators are sufficiently oversold to expect a relief rally into year-end. The normalized equity-only put/call ratio was highly stretched and it has begun to mean revert, which is a classic buy signal. 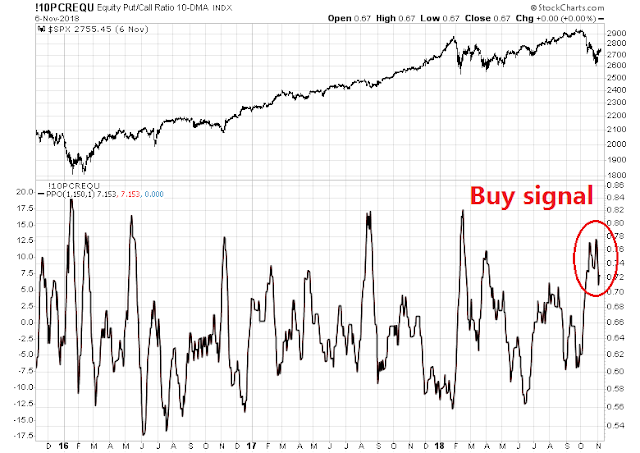 There are other signs that risk appetite is recovering. Emerging market stocks, which have been badly beaten up in the latest downturn, have begun to show some signs of life. EM equities (EEM) compared to the MSCI All-Country World Index (ACWI) have rallied through a relative downtrend. The performance of the other major components show that all regions, except for China, are showing signs of relative strength. 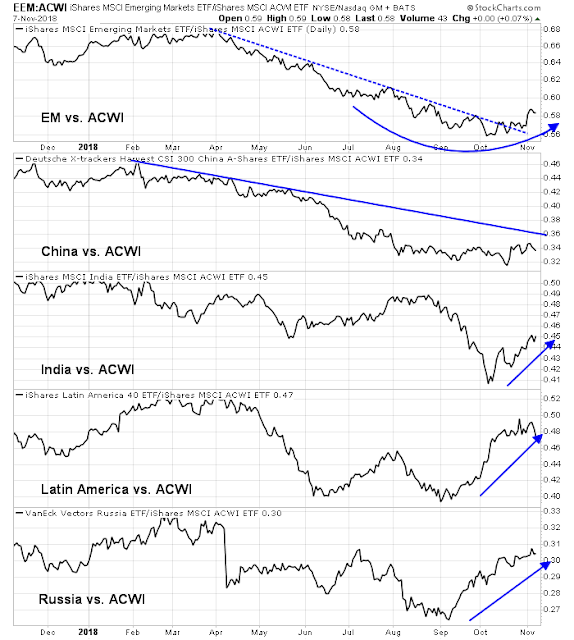 There is much evidence that stock prices perform well after midterm elections. Here is one example of the historical pattern from CNBC.

However, I would temper those expectations by pointing out that there are many ways of analyzing the historical data. The same CNBC report showed that Fundstrat found equities perform well only when House control remains unchanged, which is not the case in 2018. 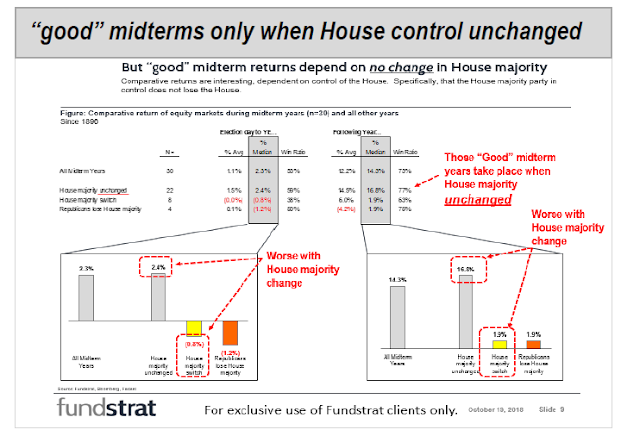 In the last 100 years, Ned Davis Research found that the combination of a Republican president and a split Congress occurs about 10% of the time, and the DJIA’s annualized return is -6.1% during those instances. 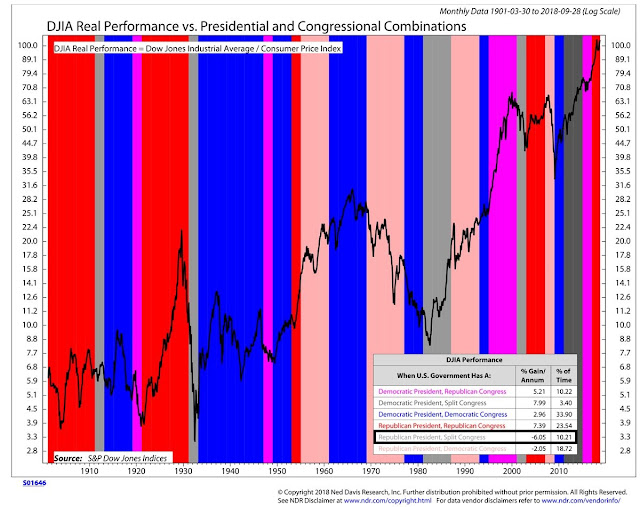 In the very short-term, the market was already at overbought extremes as it approached election night Tuesday. Conditions are going to be even more extended after Wednesday’s rally. 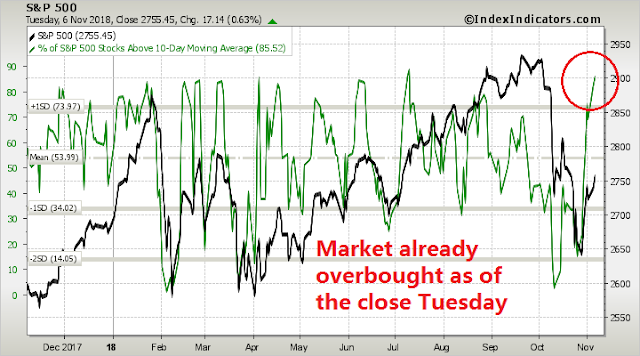 Rob Hanna at Quantifiable Edges did not find a short-term trading edge after the midterm elections, except for a one-day rally after the election. 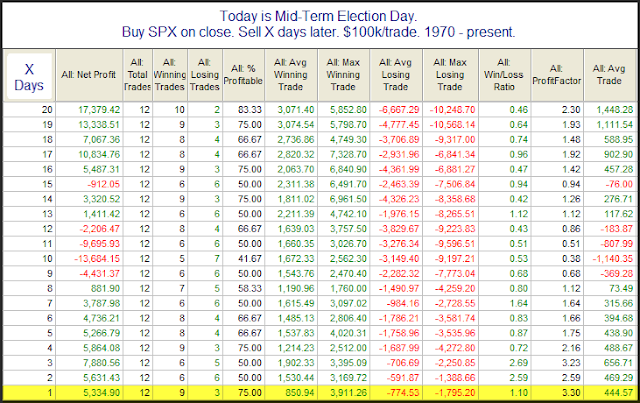 The most likely short-term scenario for the market is it chops around a bit more, as the Fear and Greed Index did during past W-shaped bottoms. 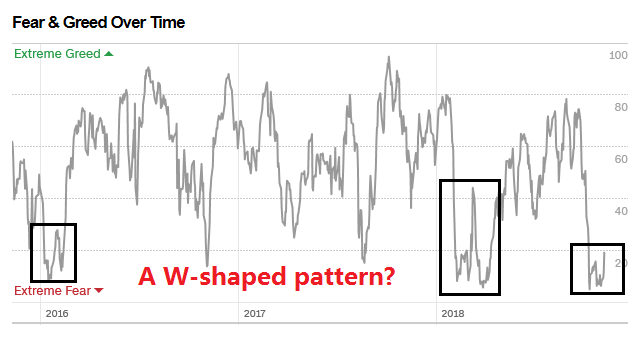 In conclusion, how you should behave is a function of your time horizon. The stock market appears to be making a broad-based top, but it is also in the process of making an intermediate bottom, and a year-end rally is likely. Tactically, however, stock prices are highly overbought and will probably pull back and possibly test the recent lows. At a minimum, expect one or both of the gaps below to be filled first before the the market can mount a sustainable rally.

12 thoughts on “Bullish or bearish? What’s your time horizon?”