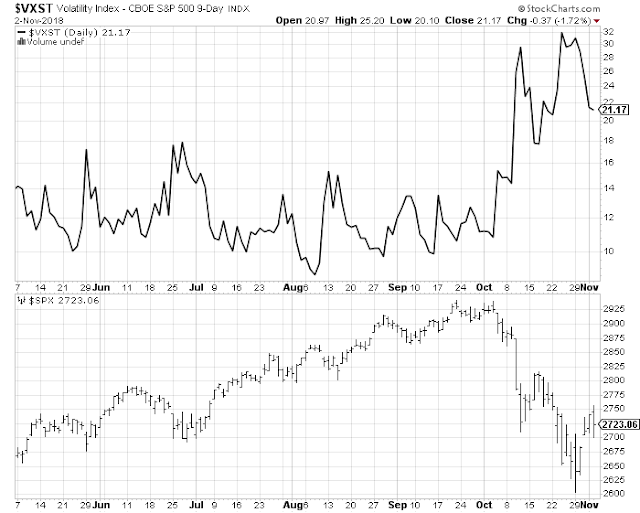 VXST closed at 21.17 last week. indicating that the market expects an annualized volatility of 21.17% over the next 9-days. When I translate that to a weekly volatility by taking the 52nd root (52 weeks in a year), it comes to 1.1%. That figure seems low for several reasons. First, the SPX rose 2.4% last week and its low to high range was 5.9%. The midterm elections on Tuesday could pose an unknown event risk. As well, we have an FOMC meeting on Wednesday and Thursday, which could also shake up markets.

What the market expects

I ran two (unscientific) polls on the weekend asking respondents what they would do in the event of a Red or Blue wave. A Red Wave is perceived as unabashedly equity bullish, while a Blue Wave is equity bearish, though there was no clear consensus as to what asset class they would like to hold. 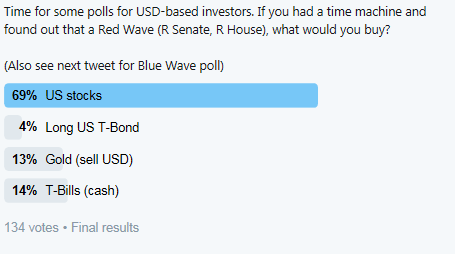 Even a deadlocked Congress, with a Democrat House and Republican Senate, may not be very equity bullish. This analysis from Nordea Markets puts it much better than I could:

The medium-term risk appetite is more at risk from a hung Congress than usual due to the pro-cyclicality of Donald Trump’s policy wishes. The road to more tax cuts and more pro-cyclical spending will be much longer if Trump must navigate a Republican Senate and a Democrat House. We argue that Trump’s policy is associated with i) protectionist inflationary impulses, ii) less immigration and accordingly increasing wage pressures and iii) excessive pro-cyclical spending / fiscal easing by now.

The third factor has been key for the positive US equity story so far this year. The prospect of additions to factor iii) will be very slim in a hung Congress scenario, which should substantially limit the market appetite to bet on further cyclical upside, unless Trump pulls off a miracle and keeps the double majority intact on Tuesday. Trump will be able to continue his aggressive trade rhetoric even with a hung Congress, as the president have widespread prerogatives on trade. So, this means that we will likely get a policy mix of more aggressive trade rhetoric and protectionist policies and less fiscal stimuli. This is a not a medium-term positive equity cocktail.

Indeed, stock prices have been fallen steadily even as the probability of a Congressional Gridlock increased. 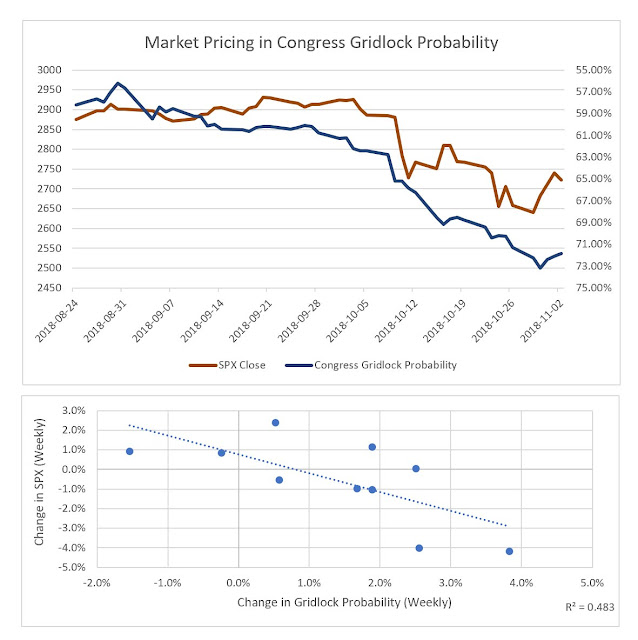 Now that we have some understanding of market expectations, what might happen if we get a fat-tailed event such as a Red or Blue Wave?

A surge in early voting

According to Michael McDonald of Elect Project, there has been a surge in early voting in 2018, which is indicative of an energized voter base. Here is the early voting turnout in some key battleground states compared to the last midterm in 2014 as of November 4, 2018:

While the consensus is a Democrat-controlled House of Representatives and a Republican-controlled Senate, the surge in early voting raises the probability of a “wave” election where one party wins both chambers of Congress.

In effect, the surge in early voting heightens the probability of a Red or Blue wave, and fat tails in market returns.

If there is to be a wave, will it be Red or Blue?

Here is how to make some educated guesses. We can get some glimpses of early voter demographics, as they are reported by some states. What is astonishing is the surge in participation by young voters, according to The Hill:

The number of voters between the ages of 18 and 29 who have cast ballots early has surpassed turnout levels from the last midterm election in just about every state, according to several sources tracking early vote totals.

In some states, especially those with hot races, the increase in turnout is staggering. In Texas, 332,000 voters under the age of 30 have cast ballots already, up nearly fivefold from the 2014 midterms. In Nevada, the 25,000 young voters who have cast a ballot is also five times higher than in the same period four years ago.

Georgia’s young voter turnout is four times higher than it was in 2014. In Arizona, three times as many younger voters are turning up.

“Voters under the age of 30, relative to their ’14 turnout, are outperforming every other group,” said Tom Bonier, a Democratic strategist whose firm TargetSmart tracks the early vote. “It’s not just like a presidential year surge where you’re getting younger voters who only vote in presidentials coming out in a midterm. A lot of these young people are voting in their first election period.”

The surge in young voters give the Democrats the edge. Pew Center Research found that Millennials tilt Democrat, while the older generations tilt Republican. 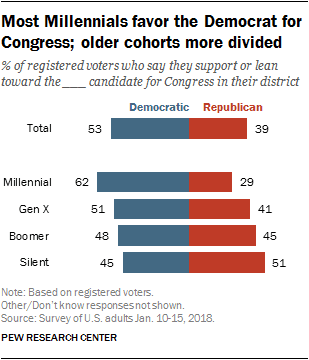 If, and that’s a big if, there were to be a wave, the early voting data suggests that it will be Blue, and that will be bearish for equities.

As well, we also have the FOMC meeting this week. Fed watcher Tim Duy believes that the Fed will interpret the strong October Jobs Report as a reason to continue tightening, and they will keep tightening until something breaks:

I don’t know yet how this will play out. What I do know is that central bankers are very comfortable with the flat Phillips Curve story, almost complacent. Essentially, they have been surprised so many times by how low they can push unemployment that they don’t really trust their ability to estimate the natural rate of unemployment and are now defaulting to a dovish scenario that allows them to maintain a gradual pace of rate hikes despite fairly hot growth. There don’t appear to be many skeptics left among central bankers. My experience is that when everyone believes the same story, it’s time to get a new story.

Bottom Line: Jobs data gives no reason for the Fed to think their job is done; rate hikes will continue.

In conclusion, both the midterm election and the FOMC meeting could pose to be a source of market volatility this week. The surge in early voting raises the odds that one party could dominate both chambers of Congress, which is contrary to the market consensus and further raise market volatility. Traders should be positioned for big market swings, either by reducing their position sizes, or by taking an active bet on volatility.

5 thoughts on “How fat tails could mean fat profits”