How far can stock prices fall in a bear market? – Humble Student of the Markets

One of the most frequently asked questions from last week’s post (see Major market top ahead: My inner investor turns cautious) was my downside objective for stock prices. While technical analysis could highlight a possible trigger for a bear phase, it is less reliable for quantifying downside risk.

Assuming the trigger for a bear market is a recession, one way to guesstimate downside risk is to examine how the historical record of stock prices behaved in past recessions. Beginning in 1981-82, that bear market was particularly nasty because it lasted over a year, and it was triggered by the Volcker tight money era. The 1990 bear market and recession, which was ostensibly triggered by the Iraqi invasion of Kuwait, was mild. The Tech Wreck in the aftermath of the NASDAQ Bubble in 2001-02 was also painful, but was preceded by an unprecedented surge in stock prices. The bear market of 2008 was short and sharp, but stock prices fell roughly 50%. In conclusion, the historical record indicates that downside risk is in the 20-50% range. 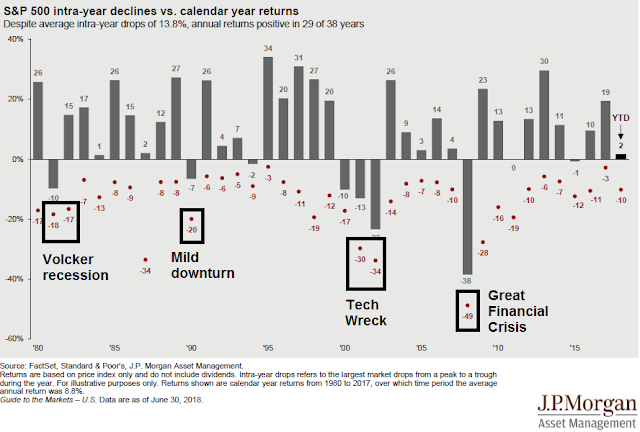 But that’s not the whole story.

That 20-50% figure is wide enough to drive a truck through. Another way of estimating downside risk is to analyze two components.

History gives us some guidance. Earnings fell roughly 20% in the “mild” 1990 recession, and fell considerably more in the post-NASDAQ Bubble and the GFC, in the order of 40-50%. 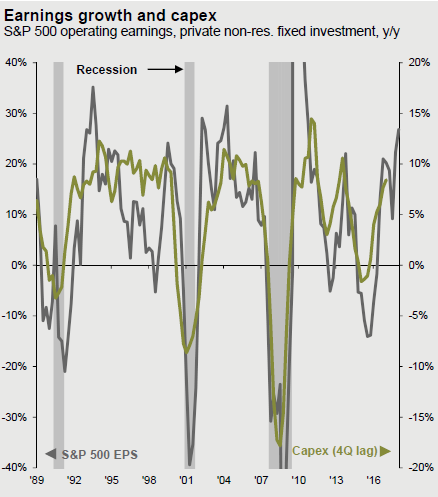 Recessions tend to be periods in which the excesses of the past cycle are unwound. Arguably, there are few excesses evident in the American economy outside of sky high unicorn valuations in Silicon Valley. Even if the likes of Uber were to blow up in the next downturn, their demise is unlikely to sink the economy. That argues for a mild Fed-induced recession, where earnings fall 20% for purely cyclical reasons, such as a downturn in housing, and so on.

However, if we were to cast our eyes around the world, the excesses are not to be found within US borders, but abroad. I don’t need to repeat the story of how high debt levels in China represent an accident waiting to happen. Imagine the following scenario, the Fed induces a mild slowdown in the US, which could be exacerbated by a trade war. Falling American consumption craters Chinese exports, and drags the Chinese economy into a slowdown through the combination of falling trade, and defaults from excessive debt. The Chinese slowdown tanks most of Asia, such as Hong Kong, South Korea, Taiwan, and Japan, as well as the resource extraction economies of Australia, New Zealand, Canada, Brazil, and South Africa. Germany, which is the growth engine of the eurozone and a major exporter of capital equipment to China, slows, which drags down European growth and exposes the banking leverage problems that were not fixed from the last crisis.

On top of that, shrinking USD liquidity in the offshore market pressures EM economies (see Turkey). In short, these are the ingredients for another Great Financial Crisis.

To quantify downside risk, we modeled different scenarios, where earnings fall 20% in a mild recession, and 40-50% in a deeper crisis. I have combined that with projections of how the P/E ratio might behave under different interest rate scenarios. CNBC reported that Jamie Dimon believes the 10-year note should be yielding 4%, and 5% is not an unrealistic outcome.

Though the bank chief previously theorized that the yield on the benchmark 10-year Treasury note could reach 4 percent in 2018, his comments Saturday at the Aspen Institute’s 25th Annual Summer Celebration Gala appeared to reflect his belief in a stronger economy.

“I think rates should be 4 percent today,” Dimon said. “You better be prepared to deal with rates 5 percent or higher — it’s a higher probability than most people think.”

In a similar vein, Josh Brown recently highlighted some anecdotal analysis from Larry Jeddoloh in Barron’s:

A couple of weeks ago, I drove exactly the same route I did two weeks before the elections in 2016—through Winston-Salem and Raleigh-Durham and Charlotte, N.C., up into the Shenandoah Valley in southwestern Virginia and then up to Washington, D.C. One reason I thought Trump would win was that almost every lawn had a Trump sign. It went on for miles. Now it has completely flipped—there are no Trump signs, but there are large numbers of Help Wanted signs. We are going to get some wage pressure. The Fed will be pushed to raise interest rates. The natural rate for 10-year Treasury yields is more like 4% to 4.25%, not 3%. The last time the 10-year took a run to 3%, in January and March, the markets started to wobble. The speed of the move is just as important as the level. So the market can drive the economy in my view. 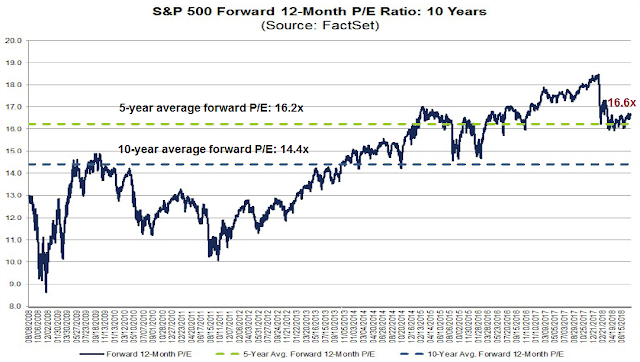 I conducted scenario analysis to arrive at a downside target using differing assumptions:

The results are summarized in the table below. 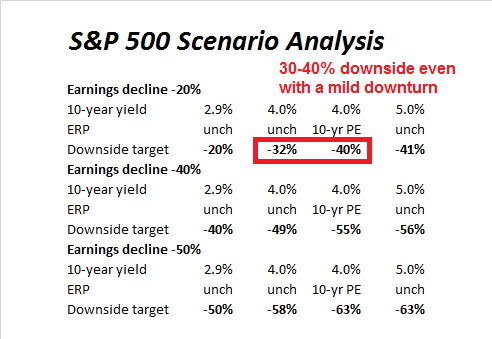 Downside risk varies between -20% to -63% in the worst cases. The unweighted downside average target of all these scenarios is -47%. Even if we were to assume a mild downturn where earnings fall -20%, it is not difficult to arrive at a 30-40% drawdown if the 10-year yield were to rise to 4%.

In conclusion, a reasonable estimate of peak-to-trough downside US equity risk in a recession next year is in the 35% to 45% range. In a rosy scenario, downside risk is limited to 20%, but that would be the most optimistic scenario.

14 thoughts on “How far can stock prices fall in a bear market?”