Mid-week market update: Earlier in the week, Mark Hulbert wrote that “U.S. investors should see this Turkish crisis as a buying opportunity”. Hulbert went on to cite the historical record of past currency crises:

And it’s not just 20-20 hindsight for me to point this out now, with a strong bull market under our belts. On the contrary, in a series of columns beginning in March 2010, I regularly pointed out that the stock market usually takes currency and sovereign debt crises very much in stride.

I based my confidence on how the stock market had reacted previously to other such crises over the prior two decades. The crises on which I focused were the 1994 Mexican peso devaluation and associated crisis; the Thai government debt crisis 1997 (which led to the term “Asian contagion”); the 1998 Russian ruble devaluation in August 1998 (which led to the bankruptcy of Long-Term Capital Management), and the 2001 Argentine government debt/currency crisis.

The accompanying chart shows how the U.S. stock market—on average—reacted to these four crises. For both data series, 100 represents the stock market’s level when those crises first broke onto the world financial scene. Notice that equities’ reaction over the four years following the Greek crisis was remarkably close to the average of its behavior in the wake of the previous crises. 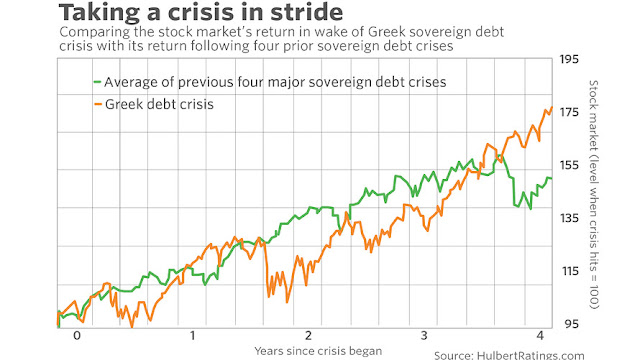 I agree. In addition to Hulbert`s points, there are two other reasons why the Turkey Tantrum will blow over.

Central bankers have not begun to fight

The first line of defense for central bankers in a currency crisis is the currency swap. When American banks find themselves in a liquidity crisis, they borrow at the Fed window, as the Fed is the lender of last resort. If foreign banks and governments encounter a liquidity crisis because of a shortage of US dollars, they cannot borrow at the Fed window. However, the Fed can establish swap lines to lend USD to other central banks, which can in turn lend those dollars to the banks in their country.

Here is how the Fed describes liquidity swaps on their website:

Because bank funding markets are global and have at times broken down, disrupting the provision of credit to households and businesses in the United States and other countries, the Federal Reserve has entered into agreements to establish central bank liquidity swap lines with a number of foreign central banks. Two types of swap lines were established: dollar liquidity lines and foreign-currency liquidity lines. The swap lines are designed to improve liquidity conditions in dollar funding markets in the United States and abroad by providing foreign central banks with the capacity to deliver U.S. dollar funding to institutions in their jurisdictions during times of market stress. Likewise, the swap lines provide the Federal Reserve with the capacity to offer liquidity in foreign currencies to U.S. financial institutions should the Federal Reserve judge that such actions are appropriate. These arrangements have helped to ease strains in financial markets and mitigate their effects on economic conditions. The swap lines support financial stability and serve as a prudent liquidity backstop.

If the Fed believes that the risk of global financial contagion is too high, it can choose to establish a swap line with the Turkish central bank in order to stabilize markets. Remember, the Fed can create USD out of thin and and extend as much liquidity as it chooses. So far, it hasn’t done so for because either it believes that the situation will resolve itself, political considerations such as the belligerence of Erdogan towards the West, or other reasons.

The extension of swap lines is usually the first step that central bankers take to stabilize markets. It is usually followed by the negotiation of an IMF directed economic program to return that country to a more sustainable long-term path.

When the news of a swap line extension hits the tape, the markets usually respond with a rip your face off relief rally.

Geopolitical pressure for a deal

The Washington Post featured an article yesterday entitled “Trump’s trade spat with Turkey has little downside with the U.S.”.

But even as decisions from Washington have helped fuel the mess, it presents only limited danger to American business interests. The United States trades a relatively skimpy amount with Turkey, and U.S. banks likewise don’t have much exposure there.

That gives President Trump a freer hand escalating his confrontation with Turkish President Recep Tayyip Erdogan over the jailing of Andrew Brunson, an evangelical American preacher.

Unlike Trump’s other trade showdowns, in which he’s aiming to extract economic concessions, his fight with Turkey centers on the preacher’s case — suggesting the president is increasingly willing to use trade leverage to accomplish diplomatic goals. And in Turkey’s case, there appears to be little immediate downside for the U.S. to doing so.

In the short run, that analysis is correct. In the long run, however, Jim Edwards wrote in Business Insider that Turkey is very important to the West from a geopolitical viewpoint. 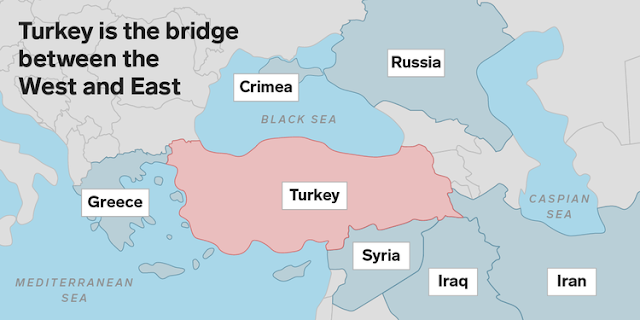 As this map shows, Turkey may not be important economically— in terms of contagion to the rest of the global economy — but it sure is important strategically and militarily.

Turkey is the bridge between the democratic, peaceful West and the war-ridden dictatorships of the East.

How strong do we want this bridge to be?

Turkey has important strategic importance to the West [emphasis added]:

On its Western flank, Turkey borders Greece and Bulgaria, Western-facing members of the European Union. A few years ago, Turkey — a member of NATO — was preparing the join Europe as a full member.

Turkey’s other borders face six nations: Georgia, Iran, Iraq, Syria, Armenia, and Nakhchivan, a territory affiliated with Azerbaijan. Five of those are involved in ongoing armed conflicts or outright war.

Turkey is the thing that has physically prevented the Islamic State terrorist group from rolling into Greece. It keeps the Syrian war inside Syria. It prevents the Russians from rolling back into Bulgaria. And it deters the Iraqis, Iranians, and Kurds from escalating their various conflicts northward into Europe.

That’s the reason Turkey has the largest standing army in Europe. We need Turkey to be strong and stable, in other words.

The Turkish air base at Incirlik serves as a major jumping off point for US and NATO forces to intervene in the Middle East. A policy of isolating Turkey risks not only the loss of this important NATO base, but it could drive Ankara into the arms of Iran, Russia, or worse, towards Islamic fundamentalism. It is only a matter of time before the conversation turns from Turkish intransigence to national security and foreign policy considerations. Will future historians be debating the question of who lost Turkey to Russia, Iran, or ISIS?

For Europe, the worst banking exposure to Turkey comes from the Spanish banks and amounts to about 6% of Spain’s GDP. While that sounds bad, the eurozone has sufficient resources contain the losses. The bigger question for the EU is NATO unity and the fate of the migrant deal. Recall that in March 2016, Turkey concluded a deal with the EU where it would stop the flow of refugees in return for a €6 billion refugee fund, visa-free travel and a fast-tracked EU membership. The latest crisis puts that deal into jeopardy, and the prospect of another Syrian refugee surge into Europe would turn the politics of the region upside down.

Don’t get me wrong, I believe that Erdogan’s policy responses to the crisis is wrongheaded. Capital controls will not solve the problem. Neither will tariffs on imports, or an import substitution policy. However, the geopolitical price for allowing the Turkish economy to go down in flames is just too high. Despite the rhetoric, I would expect that there are backstage discussions occurring where a compromise solution will eventually be found. Indeed, there was a note of optimism when Reuters reported that “Problems with the US will be resolved”.

If you are bearish and think that the Turkish crisis is the signal for a major global risk-off episode, think again. and don’t get too short. There are too many institutional factors arrayed against you, and when they are unleashed, they will rip the face off any short seller.

In the meantime, the outlook for US equity prices is constructive for the bulls. The market flashed a buy signal yesterday when the VIX Index rose above its upper Bollinger Band on Monday, mean reverted below Tuesday, and tested the upper BB again Wednesday but closed below. 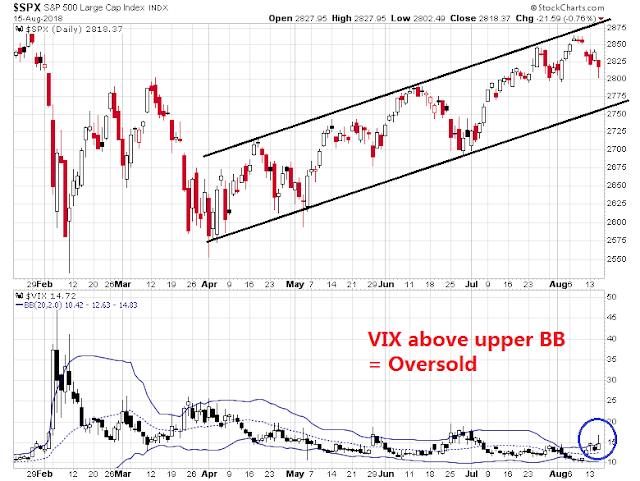 The breadth chart from Index Indicators shows that the short-term (1-2 day) outlook is oversold and poised for a relief rally. 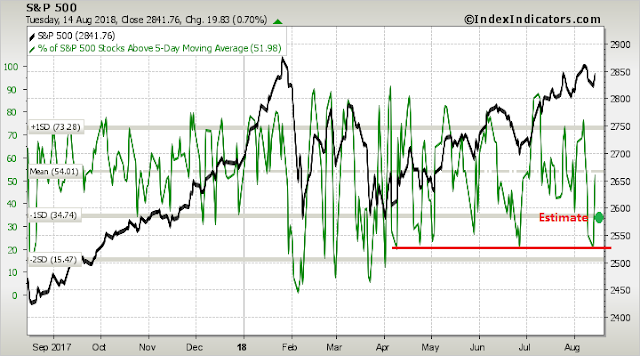 My inner trader dipped his toe into the long side last Friday, and he is holding his position in anticipation of higher prices.

1 thought on “Three reasons to ignore the Turkish Apocalypse hype”