The bulls are back in town – Humble Student of the Markets

Mid-week market update: In my last mid-week market update (see Still choppy, still consolidating), I highlighted the weekly (unscientific) sentiment survey conducted by Callum Thomas. The poll showed fundamentally oriented investors to be very bullish, while technical survey was bearish. I suggested at the time that one of the signs that the sideways consolidation may end was an agreement between the fundamental and technical survey, indicating either positive or negative momentum.

The latest survey shows that such an event has occurred as technicians have flipped from bearish to bullish.

While this is not an unqualified trading buy signal, there are plenty of indications that the bulls are back in town.

I can point to a number of constructive technical and sentiment indicators with bullish implications. From a short-term tactical perspective, the SPX has staged both an upside breakout through a downtrend, and broken out of an inverse head and shoulders (IHS) pattern. In addition, the market shrugged off a rise in the 10-year Treasury yield up to the 3% level. Remember how stock prices reacted the last time this happened? 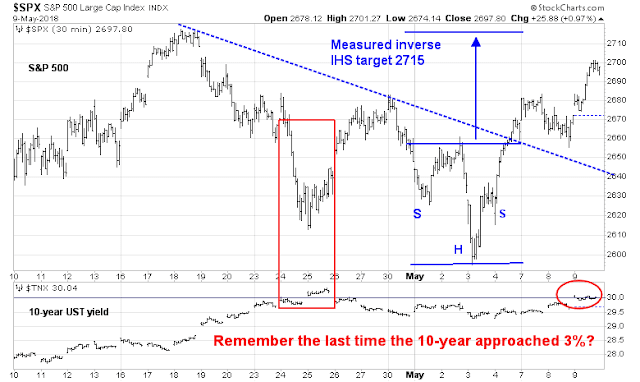 If the bulls gain control of the tape, then price momentum is likely to become dominant again. This factor remains in an relative uptrend and it is poised for an upside breakout to new highs.

To be sure, I don’t pretend that this is an unqualified buy signal. There is plenty of overhead resistance that could stall this rally, starting with an initial resistance zone at about 2865. There is also a second declining trend line, which will act as secondary resistance. Beyond that, the IHS measured target of about 2715 also coincides with the upper Bollinger Band. The rally could stall at any of these levels in the near future. In addition, the VIX Index has breached its lower Bollinger Band, which is often the sign of either a short-term top, or a brief consolidation period. 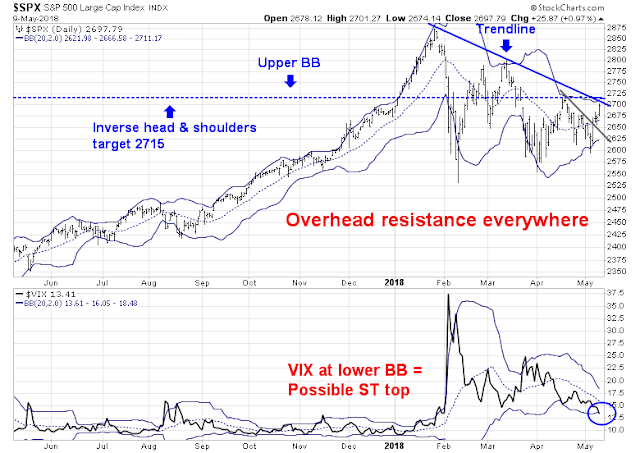 Nevertheless, these developments are signals that the bulls are slowly gaining the upper hand and a summer rally may be just starting. My inner trader has been bullish for much of the consolidation period, but he is not so blind as to believe that stock prices are going to go up in a straight line. He is likely to take some partial profits should the market hit some of these resistance levels, and buy back in on the pullbacks.

3 thoughts on “The bulls are back in town”