The end of December is filled with analyst forecasts for the following year. I would like to take this time to debunk some of the doomster myths about the stock market, and to outline some of the true risks that I worry about in the year to come.

One of the major myths that have been trotted out is the relationship between the Fed’s balance sheet and stock prices. While this chart appears impressive, it is an illustration of the adage about correlation does not equal causality. 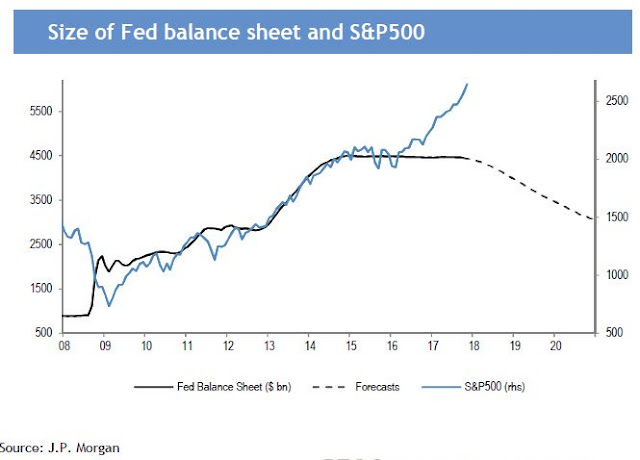 Instead, investors could be much better served to focus on earnings, with does have a direct causal effect on stock prices. Forward 12-month EPS is coincident with stock prices, and they are rising. 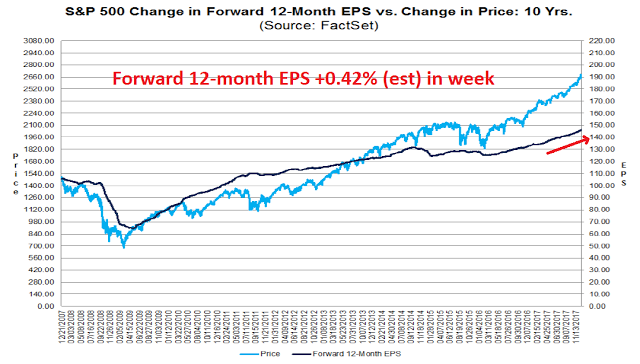 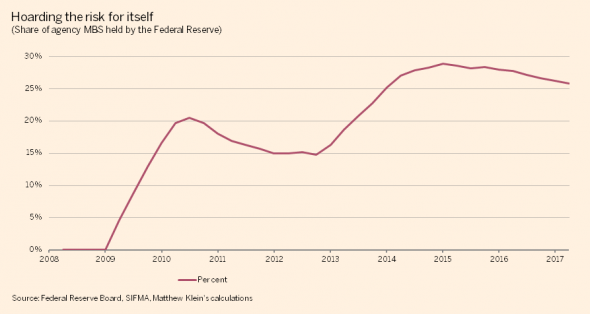 So when happens when the MBS holdings roll off the Fed’s balance sheet in a rising rate environment? Can the market handle the extra supply? Already, we are seeing spreads on 15 and 30 year mortgages edge up. While the spread remain range bound, this is a situation I am keeping an eye on. 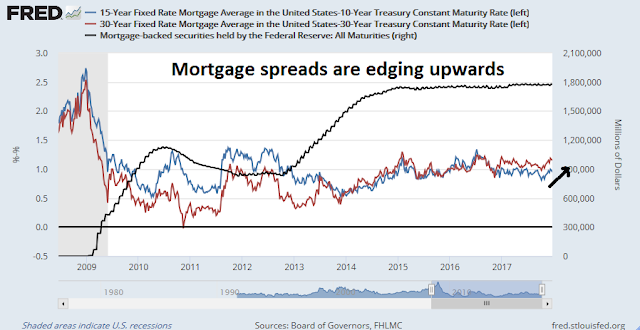 Housing is an important cyclically sensitive consumer durable sector of the economy. It has already been hit with a combination of higher lumber prices from tariffs on Canadian lumber, and the partial loss of mortgage interest deductibility from the new tax bill. It doesn’t need an extra headwind from higher mortgage rates because of the Fed’s QT program.

Worry about a more hawkish Fed

One of my concerns going into 2018 is the likelihood of a monetary policy that is tighter than current market expectations. Larry Meyer et al at Monetary Policy Analytics recently tried to put names to the Fed’s dot plot, and the analysis graphically illustrates the hawkish direction that the Fed is expected to take in 2018. 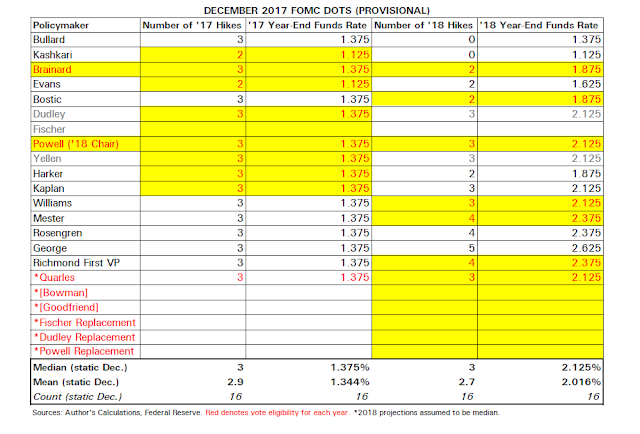 The analysis, which is based on the current membership of the FOMC in 2018, indicates that voting members expect 3 rate hikes and 2019 ending Fed Funds rate of 2.125%, compared to the mean of 2.7 rate hikes and 2019 ending rate of 2.016%. This stands in contrast to approximate a market expectation of roughly 2 rate hikes in 2018. That projection does not include Marvin Goodfriend, who has been nominated to the Fed Board of Governors. Goodfriend is a staunch monetarist and he is likely to be at least as hawkish as the median voting member, if not more.

The latest analysis shows that the US economy has closed the output gap, when inflationary pressures appear. Therefore Fed officials are unlikely to tilt in an overly dovish direction. Any disagreements are likely to be on tactics and timing of monetary policy normalization, not about the general direction. 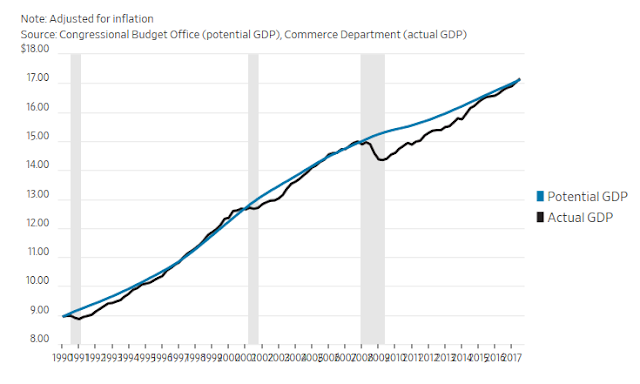 Edward Harrison also raised the point that there may be a subtle shift that may occurring at the Fed. In light of the Trump administration’s bias towards deregulation, Harrison speculated that the Powell Fed may have to use monetary policy to meet their third mandate of financial stability, as the old tools of macro prudential policies are getting taken away:

To me, that means the Fed has a third mandate, if you will. It means that financial stability is always a fundamental issue that the Fed is addressing with monetary policy. With Jay Powell, the question is whether he steers the Fed to address financial stability via macroprudential tools as the BIS suggests or whether he uses rate policy more actively.

Let me address that this way: My sense is that the Trump Administration is working actively to reduce regulation in a way that will increase financial instability concerns at the Fed. Look at what’s happening at the Consumer Financial Protection Bureau or at the Department of Transportation or at the Office of the Comptroller of the Currency. All of the regulatory moves the Trump Administration is making move in the direction of fewer regulations and less regulatory oversight on a wide range of issues. In terms of the financial system, this will mean that the Fed cannot count on macroprudential tools to do the heavy lifting of ensuring financial stability. Only to the degree that the Fed reaches into the financial system directly, mandating tighter regulatory control in its role as regulator, could we expect the Fed to use macroprudential tools. But people like Dan Tarullo who favour this approach are gone.

I believe the preponderance of evidence indicates that the Fed will have to use rate policy to address financial stability concerns. And if they do, this could mean more rate hikes than currently anticipated by financial markets.

Translation: It could mean even higher interest rates.

The effects of higher rates

If interest rates are rising, then a key question for investors is, “What are the effects of higher rates?”

Michael Leibowitz recently penned an article called “Squeezing the Consumer from Both Sides”, where he estimated the effects of a 25 bp rise in short-rates added about $7 billion to household interest payments from floating rate debt, while the banks have barely passed through any rate hikes to savers.

While $7 billion may sound like a lot, this chart from FRED shows that Q2 2017 consumer debt service payments came to $784.8 billion. So who is worried about a 1% increase in debt service costs if rates rise 0.25%? Even if short rates rise 1% next year, will a 4% rise in household debt service cost tank the economy? 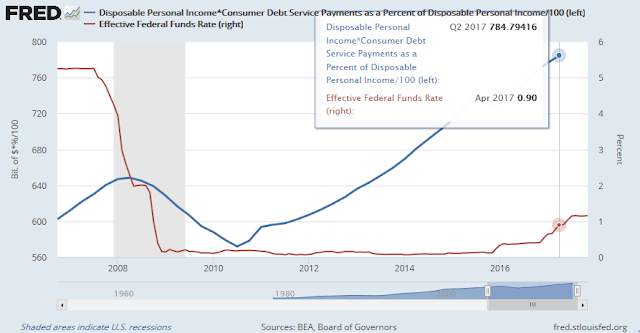 While I am not worried about the direct effects of rising rates on the household sector, I am concerned about the state of corporate balance sheets. Corporate treasurers have gorged themselves on cheap debt in the wake of the Fed’s QE programs, and corporate leverage have returned to pre-crisis levels. 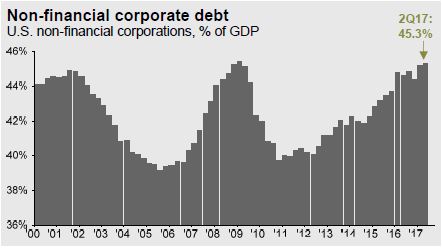 I am also concerned about offshore linkages, especially if the Fed engineers a mild slowdown in the American economy. In particular, Chinese debt levels are at stratospheric levels seen at past financial crisis. 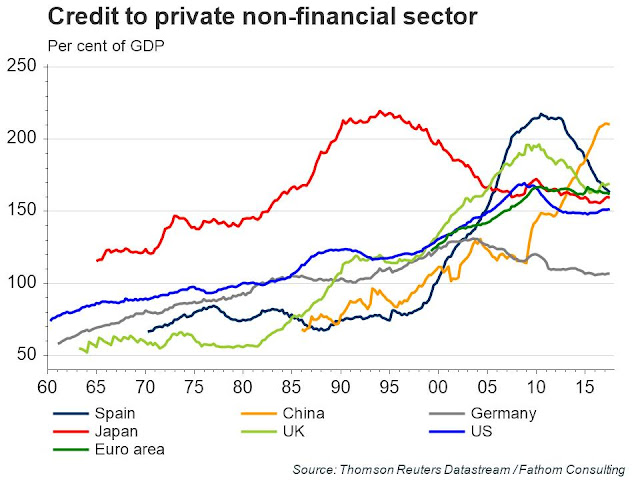 Chinese companies received an unwelcome Christmas present when short rates spike to new highs on Christmas Day. Chinese companies, the shadow banking system, and small banks are particularly vulnerable as they have a tendency to be financed with short-term debt that needs to be rolled over continuously. 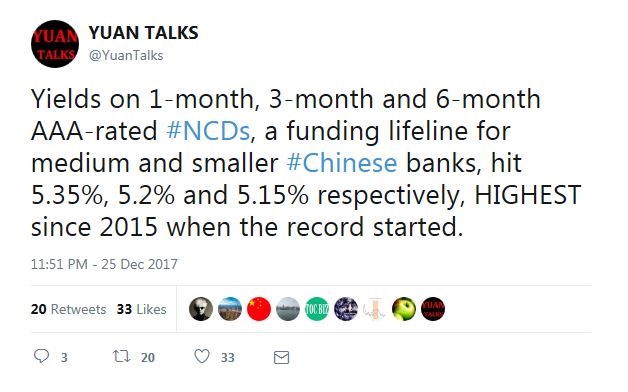 Lastly, I would like to warn about a possible false equity market sell signal from the junk bond market. Tiho Brkan observed that trouble in the junk bond, or high yield (HY), market, in the form of widening spreads, has preceded equity market tops. 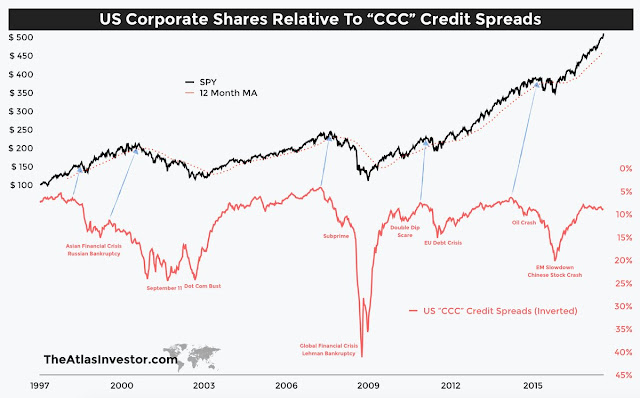 However, the new tax bill will limit corporate interest expense, up to 30% of a company’s EBITDA (Earnings Before Interest Taxes Depreciation and Amortization). This provision will stress and penalize highly indebted companies. In other words, these are the lowest credit borrowers, or junk bond issuers. The market will no doubt adjust and re-price junk bond prices. Expect HY spreads to blow out early in 2018, but don’t mis-interpret that effect as a loss of risk appetite from the credit market.

Instead, I would urge readers to focus on confirmation signals from other segments of the credit market, namely investment grade (IG), and emerging market (EM) bonds. If those markets also start to deteriorate, then batten down the hatches.

In conclusion, there are many things to be wary of in 2018, but there are also a number of red herrings. Don’t spend all your time over at Zero Hedge, and focus on the more important indicators of economic and equity market health.