I see that the world is catching up to me. The resignation of Federal Reserve vice chairman Stanley Fischer has sharpened the focus of analysts on the future composition of the Fed Board in determining the direction of monetary policy. This is a topic that I have been writing about since June (see A Fed preview: What happens in 2018?).

As well, in light of leaks indicating that Gary Cohn is no longer the front runner to be the next Fed chair, there has been widespread speculation as to the identity of the next Fed chair in determining interest rate policy. A number of commentators, such as Pedro da Costa, have speculated that Trump’s demand for personal loyalty is likely to usher in an era of a highly politicized Federal Reserve and destabilize the Fed’s credibility. This factor is particularly acute as there will be four vacant seats on the Fed’s Board of Governors after Fischer’s departure – and that does not include the possible replacement for Janet Yellen.

In other words, we have potential chaos at the Fed in 2018.

Tim Duy described the dynamics of the FOMC as voting power shifting from Board governors to regional Fed presidents, which lends to more volatility in policy direction:

So now we are down to three governors and five regional presidents on the FOMC. At least in theory, this means the regional presidents can roll the governors on policy votes. Which means I have to start taking the presidents a little more seriously. Because in all honestly when the Board is fully staffed, that is where the power resides. And there is only so much time in the day to read speeches. The presidents talk a lot (but will the come speak at my events in Portland, a little hop from San Francisco – noooo), the governors too little.

Moreover, the Board generally offers a certain consistency of thought across years, whereas the regional presidents on the FOMC rotate. So next year, for example, the torch will pass from the dovish Minneapolis and Chicago Presidents Neal Kashkari and Charles Evans to the more hawkish San Francisco and Cleveland Presidents John Williams and Loretta Mester. Also added will be the still-to-be-announced Richmond Federal Reserve President, a hawkish spot in recent years.

From a tactical perspective, the December FOMC meeting on interest rates could be volatile, as the FOMC is split down the middle between the hawks and the doves:

It is easy to tell a story where Chair Yellen, Powell, Philadelphia President Patrick Harker, and New York President William Dudley all support a December rate hike while Brainard, Kashkari, Evans, and Dallas President Robert Kaplan oppose. What fun would that meeting be?

New faces at the Fed

And then there are the potential changes to the Fed Board:

Of course, Randy Quarles is waiting in the wings for Senate confirmation, so perhaps he would tip the balance to the hawkish side. Marvin Goodfriend is rumored for another open position, but has yet to be nominated (I can see both hawk and dove in his record, but I am thinking he will lean hawkish). So it may be that by the beginning of the year the voting power will tip back to the Board, backed by a fairly hawkish rotation of presidents. So if the doves want to take a longer pause before hiking rates again, they need to ensure Yellen is on their side going into the end of the year.

A Bloomberg article indicated that the race for the new Fed chair is not just a two horse race between Yellen and Cohn, but the White House is considering at least six names, such as Kevin Warsh, Glenn Hubbard, John Taylor, and others.

While the Fed chair has a strong voice in determining the future of monetary policy, I believe that a singular focus on the identity of the next chair is the wrong way to forecast the direction of interest rates in 2018 and beyond. There are several other openings on the Board, and the tilt of the new governors will play an equally important role in the Fed’s policy direction.

I recognize the framework of Trump’s predilection for personal loyalty is important, but if he wants a dovish Fed, he will need to not just appoint a loyal and dovish Fed chair, but stack the Board with other doves. Janet Yellen has historically been a dovish central banker, starting with her stint as the president of the San Francisco Fed. Can Trump actually find that many doves?

Consider the alternatives. Randy Quarles, who has been nominated for a post as Fed governor, is a Republican and a hawk. Marvin Goodfriend, who is said to be up for nomination, is a monetarist who favors a rules-based approach to monetary policy and therefore a hawk.

The other leading candidates for the position of Fed chair are also in the Republican rules-based monetary policy mold. Bloomberg reported that John Taylor, Glenn Hubbard, and Kevin Warsh criticized the Fed early this year for being behind the curve on monetary policy:

Speaking at the annual American Economic Association meeting that ended Sunday, Glenn Hubbard of Columbia University, along with Stanford University’s John Taylor and Kevin Warsh, criticized the central bank for trying to do too much to help an economy struggling with problems that monetary policy can’t solve.

Kevin Warsh, in particular, is thought to be a leading candidate for Fed chair, now that Gary Cohn is in Trump’s doghouse. Warsh would be an unusual choice, as he is not an economist, but a securities lawyer by training. As a reminder, the last non-economist who held the Fed chair was William Miller, who turned out to be a disaster. Also see this brutal takedown of Warsh in Medium. Reuters reported that Warsh was involved in a debate at the Council on Foreign Relations on the value of monetary policy as improv. Warsh came out against the idea:

[T]o continue to improvise policy strikes me as quite counterproductive. The crisis response is one thing and requires some degree of improvisation. A recession response or a response to weaker economic conditions, I think, to me, suggests that you go back to a view of rules, a view of understanding between markets and central bankers so they’re not surprised, so they are not finding themselves waiting breathlessly on what central bankers announce on Sunday nights to get markets to move up on Monday morning, with press releases in hand.

In an environment where fiscal, trade, and regulatory policy have room to provide further jolts of stimulus, Warsh thinks the Fed will face higher risks and more uncertain rewards if it chooses to expand its balance sheet or engage in more unconventional measures of the variety that Posen suggested. Moreover, Warsh would not like to see the Fed get into the habit of absolving elected officials of their responsibilities to promote economic growth, saying central banks are “terrible repair shops for broken fiscal policy.”

Most rules-based approaches to monetary policy would see the Fed Funds rate target substantially higher than it is today. Is that what Trump wants? Where will he find the doves?

Rather than try and guess who will or will not be appointed to the Fed Board of Governors, the identity of the next Fed chair, and the tilts of the various regional presidents, I suggest using a Taylor Rule framework for thinking about Fed policy. It is evident that most of the new Fed governors will have a bias towards a rules-based approach to monetary policy. 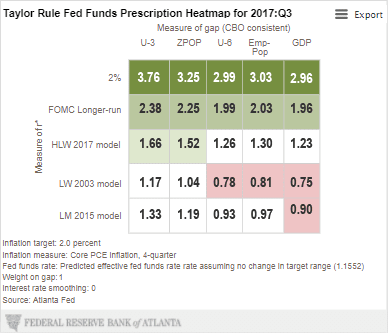 Here is the table from the Cleveland Fed, which helpfully provides projections for next two years. 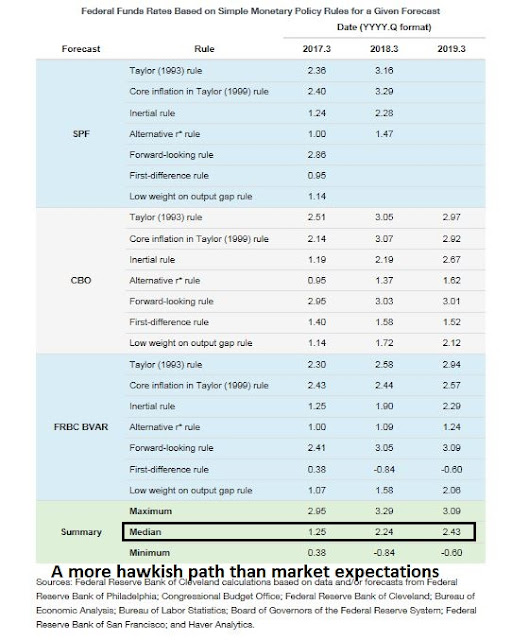 As the Trump appointees assume their position at the Fed, the likely debate will shift to the assumptions and inputs into a Taylor Rule model. As a base case, the current Q3 median Fed Funds target is 1.25%, according to the Cleveland Fed model, and 1.33%, according to the Atlanta Fed model. Both median projections are slightly higher than what the actual target is today.

As the debate revolves around the assumptions and inputs, a dovish tilt will see the policy Fed Funds target shift downwards from the median, while a hawkish tilt will mean a target higher than the median.

Here is the punch line for investors. Should rules-based adherents take control of the FOMC, the table from the Cleveland Fed is a useful guide to how interest rates are likely to rise over the next few years. Current projections call for a Fed Funds target of 1.25% in Q3, a 1% rise in the next year, and a more moderate rise in the following year to 2.43%. By contrast, current market based expectations are barely discounting a 0.25% raise by the August 2018 meeting.

Be prepared for a far more hawkish FOMC in early 2018. Regardless of who is the Fed chair, the combination of voting regional Fed presidents with more hawkish views, and the likely nomination of more rules-based Republican economists are likely to set interest rate on a far steeper path than current market expectations.

I recently wrote about the possibility of a Fed policy error, where a hawkish Fed tightens into a weakening economy (See Is the Fed tightening into a stalling economy?). The likely evolution of the FOMC in 2018 significantly raises those risks.