You may think that institutional money managers run in herds, but that is not necessarily true. Different managers have different mandates that color their views. As well, their geographical base can also create differences in opinions in how their view their world and markets.

Barron’s published its quarterly Big Money poll of institutional money managers on the weekend. The Barron’s survey sample consists of US based managers. Another well known poll, the BAML Fund Manager Survey, is published monthly and surveys global institutions. A comparison of these two polls gives us a chance to find some opportunities and risks in the market.

The US equity market comprise roughly half the weight of global equity indices, and the opinions of American managers are undoubtedly important. By contrast, the BAML sample also survey shows the views of non-US managers whose opinions can, on occasion, reveal key differences. By analyzing the degree of agreement, astute investors can find opportunities, as well as understand the blind spots of each group.

First of all, there was some remarkable agreement in the opinions of both groups. Both are bullish on equities. The Big Money poll showed a clear progression on equity bullishness.

Similarly, the BAML sample showed a similar rising level of bullishness. Normally, a bullish stampede would set off contrarian warnings of caution. However, as the chart below shows, sentiment rose in the last year from relatively low levels and they are not excessively high. Therefore it is probably too early to get cautious just yet. 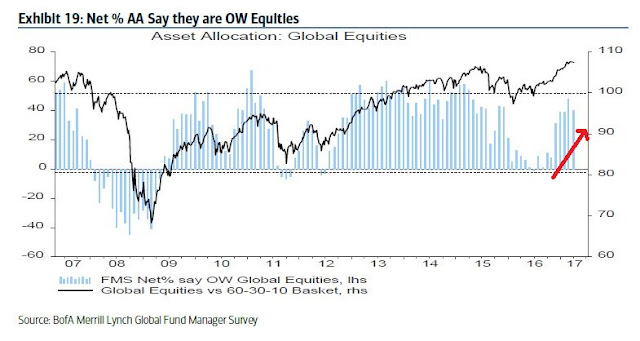 Here is another reason not to panic over institutional bullishness. Both American and global managers believed that US equities are overvalued. 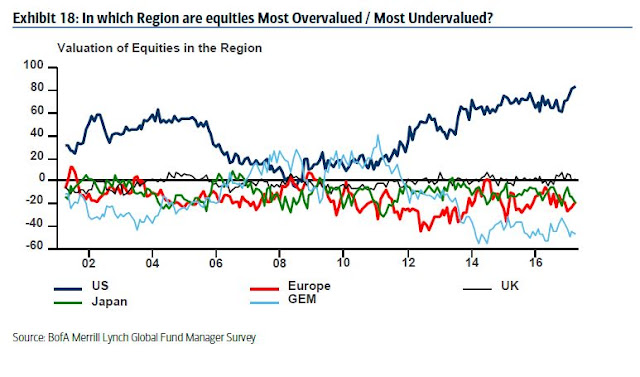 They therefore underweighted the US, and found better opportunities in Europe and emerging markets. 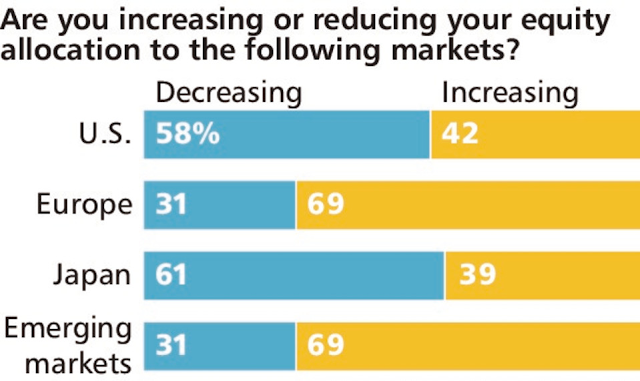 There was another consensus on sector allocation. On the whole, both are bullish on Technology and Financials (or banks), and bearish on Utilities. 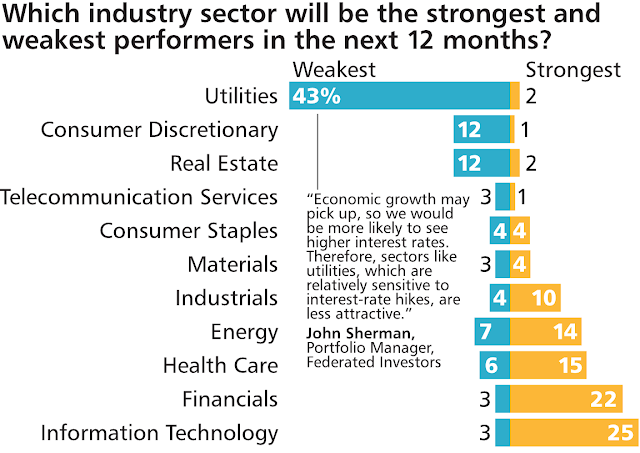 Here is the BAML survey of global managers on their US sector weights. 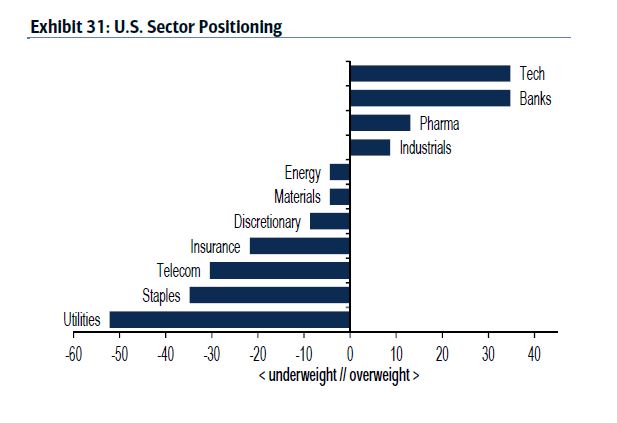 There was, however, a difference of opinion on the sources of risk. One possible explanation is how the questions were asked on the surveys. Barron’s asked about the threat to US equities, as the survey was America-centric in scope. 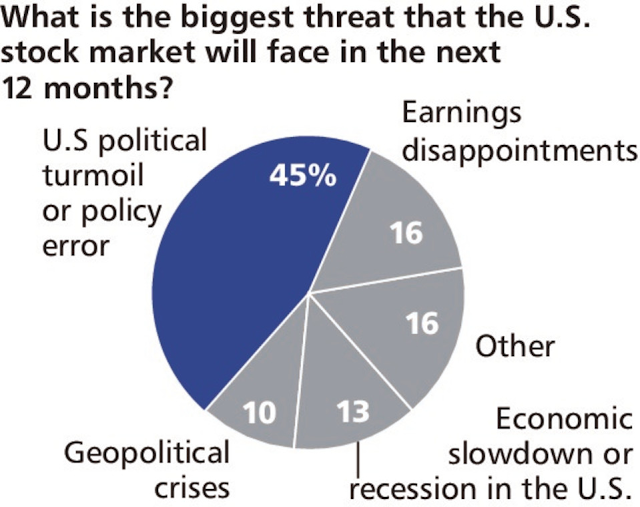 By contrast, BAML asked about the sources of tail-risk, which is a more open and generalized question. The categories “a delay in US corporate tax reform” and “the risk of a trade war” are in broad agreement with the answers from Barron’s of “US political turmoil or policy error”. However, there seems to be broad disagreement about the other sources of risk between US and global managers. 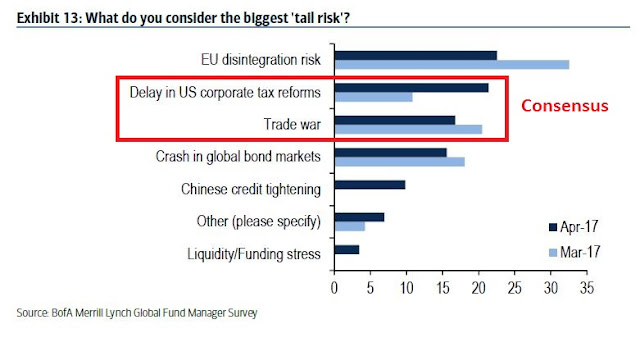 Based on the comparison of the two surveys, I have identified several opportunities and risks for investors in US equities.

Let’s start with the consensus trades. Bullish on equities. Overweight Europe and emerging markets, underweight US equities. In the US, overweight Technology and Financials, and underweight Utilities.

One of the contrarian trades that stands out is an overweight  position in the Consumer Discretionary sector. Both US and global managers are underweight US consumer discretionary stocks. As the chart below shows, the sector has begun to turn up on a relative basis. As well, the outperformance is broad based across different industries within the sector (except for Media). Should this trend continue, the sector should rise further as managers stampede into these stocks. 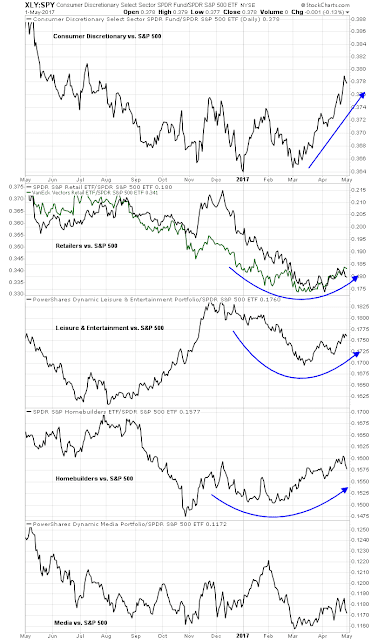 On the other hand, the crowded long in the Financial sector is a concern for me. I have demonstrated before that the relative performance of this sector has been highly correlated with the shape of the yield curve. Should the yield curve continue to flatten, it will drag down the relative strength of these stocks. Please note that I am not advocating a short position in these stocks but a neutral or underweight position in this sector because of the risks.

Related to the discussion about the shape of the yield curve, the differences in opinion on the sources of risk reveals some possible ways that institutional managers could get blindsided. One of the key tail risks identified by global managers is a crash in the global bond market. The most likely cause of such an event would be the combination of an overly hawkish Fed and the ECB shifting from an accommodative policy to a more restrictive one. Should such a development occur, the timing is likely to be in late 2017 or some time in 2018.

Under such a scenario, the crowded trade of overweight Europe and emerging markets and underweight US amounts to a high beta beta and it would reverse as managers scramble to de-risk their portfolios. A crashing bond market would expose the fragility of the eurozone banking system, which has not repaired the damage from the Great Financial Crisis, as well as that of the EM economies. Even though equity prices are likely to suffer, the US market and USD assets would likely become a safe haven on a relative basis in the event of another global financial crisis. 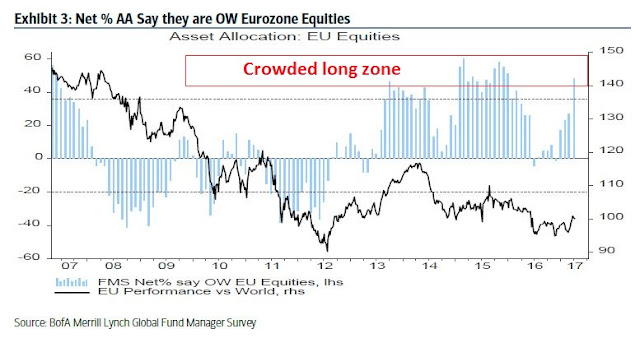 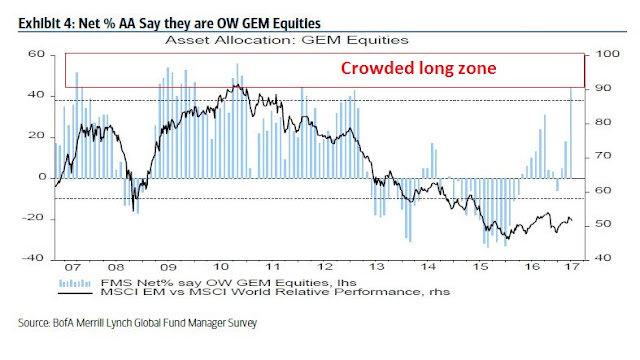 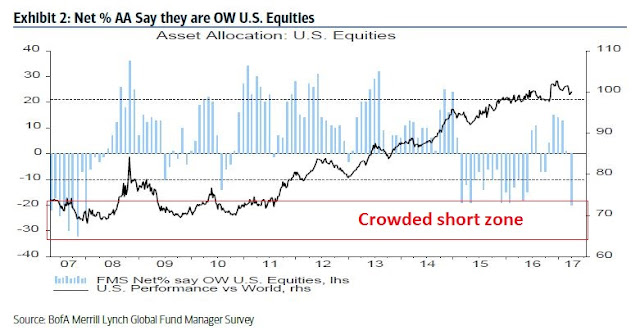 In conclusion, the analysis of the Barron’s Big Money poll and the latest BAML Fund Manager Survey yielded some remarkable insights.

In the short term, US consumer discretionary stocks represent an opportunity for better performance for long portfolios. On the other hand, the crowded long in financial and bank stocks is a bet on a steepening yield curve which may not necessarily pay off.

Looking longer term, investors need to recognize that the overweight position in Europe and EM, as well as the underweight in US equities, represent a high beta bet. While that may pay off in the short run, portfolios that are long that trade also need to recognize the macro risks should the global economy start to slow from a coordinated central bank shift from easy to more restrictive monetary policy.