Trading the Trump Tantrum – Humble Student of the Markets

Mid-week market update: The stock market sold off today on no apparent fundamental or economic news. The most likely cause was the latest ABC/Washington Post tracking poll that showed that Trump had overtaken Clinton. The race had been tightening for several days, but this seemed to be the last straw for the markets, which threw a tantrum in response. 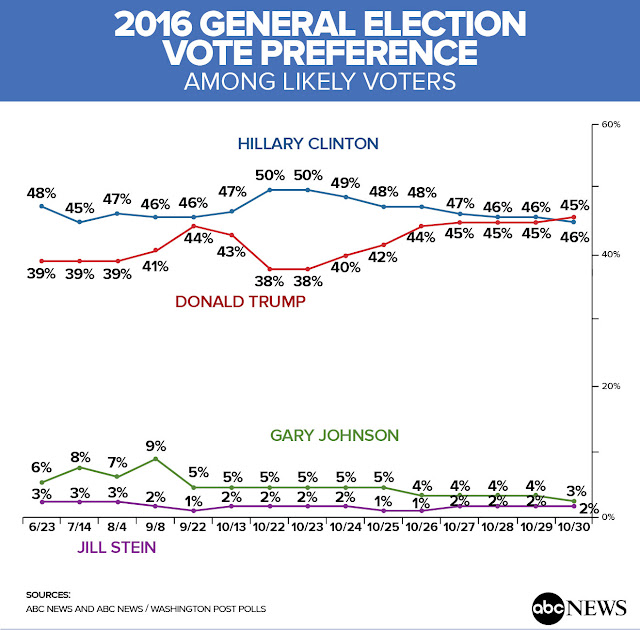 The Mexican peso, which has been an excellent barometer of the presidential race, tanked as a result.

The stock market did too. The SPX has now broken a key support level at 2120 and I am seeing bearish technicians coming out of the woodwork in my social media feeds. The Fear and Greed Index is diving into fear territory. 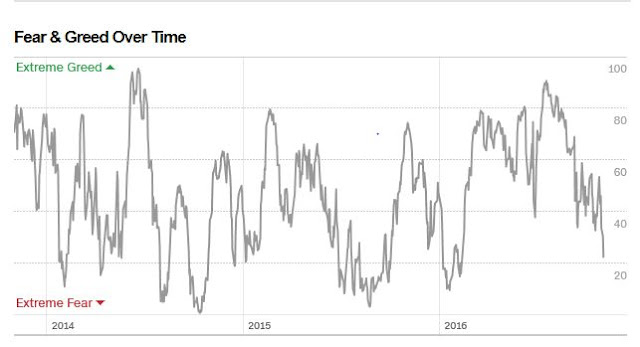 The presidential race in perspective

For some perspective, here is Nate Silver of FiveThirtyEight on the state of the presidential race. His odds show that Clinton holds a 72-28 advantage over Trump. While those odds are diminished from last week when Clinton’s odds were over 80%, the lead is still quite substantial. 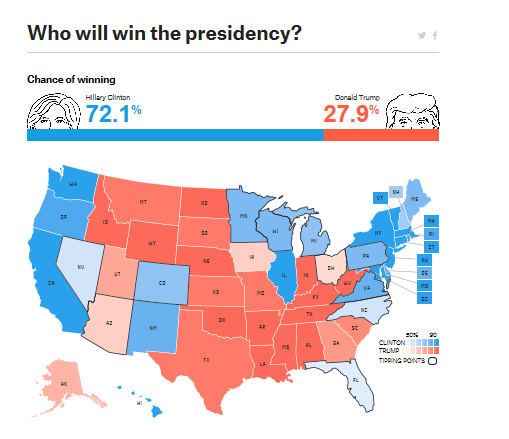 As polling numbers are inherently noise, FiveThirtyEight averages polling results. Nate Silver pointed out that the ABC/Washington Post poll had a negligible effect on their forecast.

I am seeing signs of a severely oversold market everywhere. Even before today’s market weakness, Mark Hulbert observed that his sample of NASDAQ market timers had turned surprisingly negative on the market in the face of a shallow pullback, which is contrarian bullish. Hulbert speculated that the bearishness was politically motivated: “While timers don’t often reveal why they change their outlook, one possibility is a reaction to the reopening of the Clinton email investigation and an increase in the odds of a Donald Trump victory, since almost half of the drop occurred since Friday’s close.” 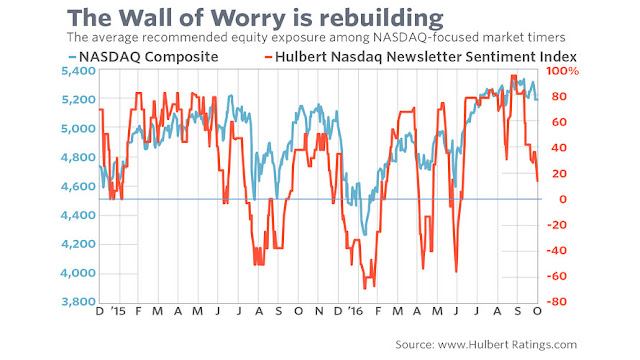 The market is flashing even more oversold signs that have been sure fire signals of a near-term market bottom. The combination of an oversold RSI-5 condition and VIX Index above its Bollinger Band has signaled short-term bottoms in the past. 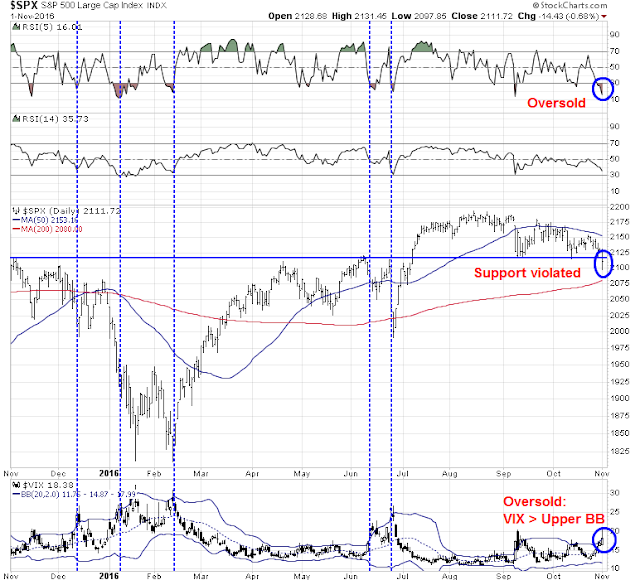 In addition, the market has become sufficiently oversold that we are seeing the setup for a Zweig Breadth Thrust (see Bingo! We have a buy signal for an explanation of the ZBT). While a ZBT setup does not guarantee a buy signal, as it requires a quick momentum-based recovery from an oversold condition, we do have the oversold condition today. The top panel of the chart below shows past ZBT buy signals. The second bottom panel shows the ZBT Indicator, whose values are delayed, and the bottom panel shows my estimate of the ZBT Indicator. As the chart shows, we have an oversold condition that defines a ZBT setup (use this link for real-time updates to follow along at home). 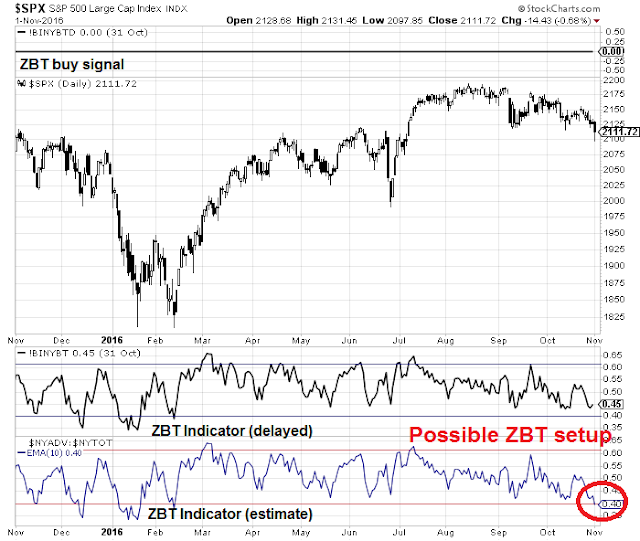 As I write these words, the interim closing CBOE put/call ratio stands at 1.44. Those readings have represented capitulation levels in the past. 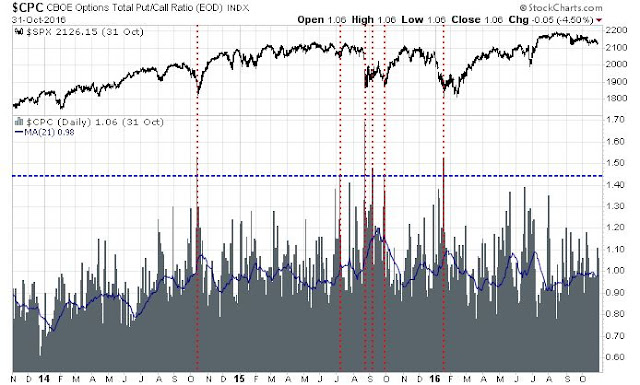 Notwithstanding the Trump Tantrum, there is hope for the bulls. Urban Carmel observed that tomorrow is FOMC day – and such days have tended to see a positive market bias in the recent past. 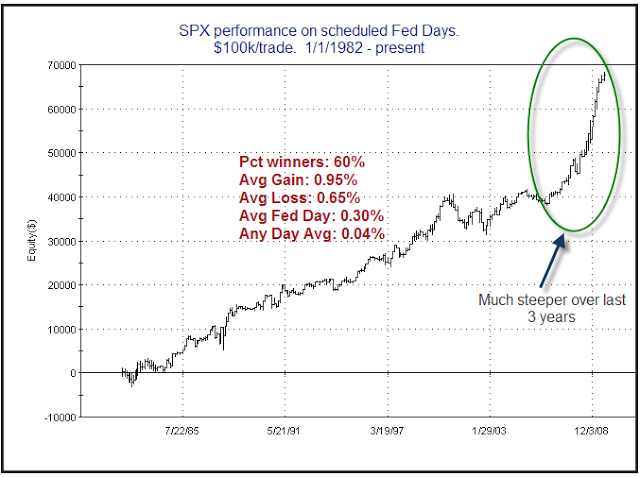 My inner trader was caught long and wrong, but the market is oversold and he is standing pat with his long positions.

7 thoughts on “Trading the Trump Tantrum”