How high a pressure can the economy take? – Humble Student of the Markets

Ever since Janet Yellen made that her “high pressured economy” speech, market analysts have been scrambling to understand what she meant by that term. The Fed Chair used that term in the context of a research conference held at the Boston Fed. So was it an academic musing, or was it a hint of a subtle shift in Fed policy?

The chart below shows the number of instances in the last 12 months when Core PCE has exceeded 2%, which is the Fed’s inflation target. As the chart shows, the FOMC has tended to start a tightening cycle whenever the rolling count has hit six. The only exception occurred in 2011, when Europe mired in a Greek debt crisis. 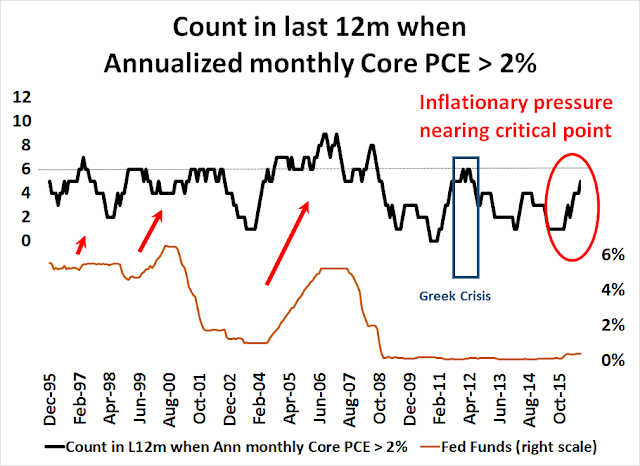 The latest September Core PCE reading, which was released today, came in an annualized 1.7%, which was short of the 2% target. With the current count at five and therefore nearing the threshold for a tightening cycle, the question of the degree of tolerance for higher pressure in an economy is an important issue for monetary policy.

Here is what Yellen said about the high pressure economy in her speech. She laid out the problem of hysteresis, or persistent low growth:

The idea that persistent shortfalls in aggregate demand could adversely affect the supply side of the economy–an effect commonly referred to as hysteresis–is not new; for example, the possibility was discussed back in the mid-1980s with regard to the performance of European labor markets. But interest in the topic has increased in light of the persistent slowdown in economic growth seen in many developed economies since the crisis. Several recent studies present cross-country evidence indicating that severe and persistent recessions have historically had these sorts of long-term effects, even for downturns that appear to have resulted largely or entirely from a shock to aggregate demand. With regard to the U.S. experience, one study estimates that the level of potential output is now 7 percent below what would have been expected based on its pre-crisis trajectory, and it argues that much of this supply-side damage is attributable to several developments that likely occurred as a result of the deep recession and slow recovery. In particular, the study finds that in the wake of the crisis, the United States experienced a modest reduction in labor supply as a result of reduced immigration and a fall in labor force participation beyond what can be explained by cyclical conditions and demographic factors, as well as a marked slowdown in the estimated trend growth rate of labor productivity. The latter likely reflects an unusually slow pace of business capital accumulation since the crisis and, more conjecturally, the sharp decline in spending on research and development and the very slow pace of new firm formation in recent years.

Yellen then went on to suggest that the Fed could compensate for secular low demand with a cyclical policy of running a “high-pressure economy”:

If we assume that hysteresis is in fact present to some degree after deep recessions, the natural next question is to ask whether it might be possible to reverse these adverse supply-side effects by temporarily running a “high-pressure economy,” with robust aggregate demand and a tight labor market. One can certainly identify plausible ways in which this might occur. Increased business sales would almost certainly raise the productive capacity of the economy by encouraging additional capital spending, especially if accompanied by reduced uncertainty about future prospects. In addition, a tight labor market might draw in potential workers who would otherwise sit on the sidelines and encourage job-to-job transitions that could also lead to more-efficient–and, hence, more-productive–job matches. Finally, albeit more speculatively, strong demand could potentially yield significant productivity gains by, among other things, prompting higher levels of research and development spending and increasing the incentives to start new, innovative businesses.

What did she mean by that? Was this the remark of an academic laying out a hypothetical policy option as an area for further research? It sounds a lot like what Yellen said about optimal control theory in her November 2012 speech:

To derive a path for the federal funds rate consistent with the Committee’s enunciated longer-run goals and balanced approach, I assume that monetary policy aims to minimize the deviations of inflation from 2 percent and the deviations of the unemployment rate from 6 percent, with equal weight on both objectives. In computing the best, or “optimal policy,” path for the federal funds rate to achieve these objectives, I will assume that the public fully anticipates that the FOMC will follow this optimal plan and is able to assess its effect on the economy.

The blue lines with triangles labeled “Optimal policy” show the resulting paths. The optimal policy to implement this “balanced approach” to minimizing deviations from the inflation and unemployment goals involves keeping the federal funds rate close to zero until early 2016, about two quarters longer than in the illustrative baseline, and keeping the federal funds rate below the baseline path through 2018. This highly accommodative policy path generates a faster reduction in unemployment than in the baseline, while inflation slightly overshoots the Committee’s 2 percent objective for several years. 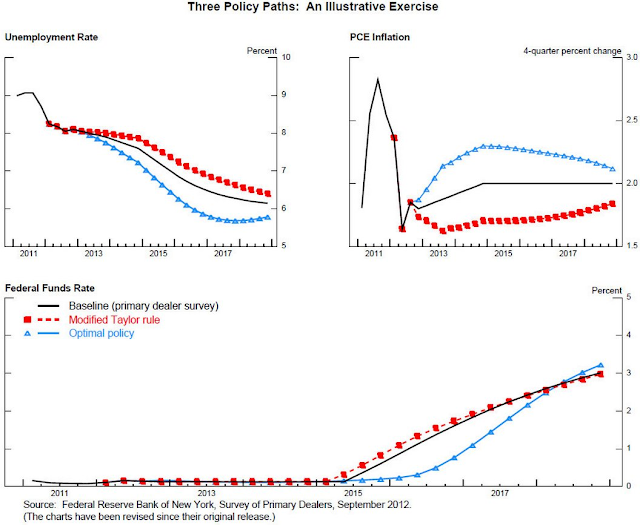 One of the clues I am monitoring is further acknowledgement from the Federal Reserve that the economy is in a low growth environment. There has been a lot of buzz about recent Fed research about demographic effects on growth, such as Understanding the New Normal: The Role of Demographics. In it, the authors postulated that “demographic factors alone can account for a 1 1/4 percentage-point decline in the equilibrium real interest rate in the model since 1980”. They concluded that, “low investment, low interest rates and low output growth are here to stay, suggesting that the US economy has entered a new normal.”

At the Boston Fed research conference, James Stock and Mark Watson presented a separate study that modeled the influence of demographic and other factors on the economy (paper here, presentation here). They framed the question as, “Why has the post GFC recovery been so weak?” 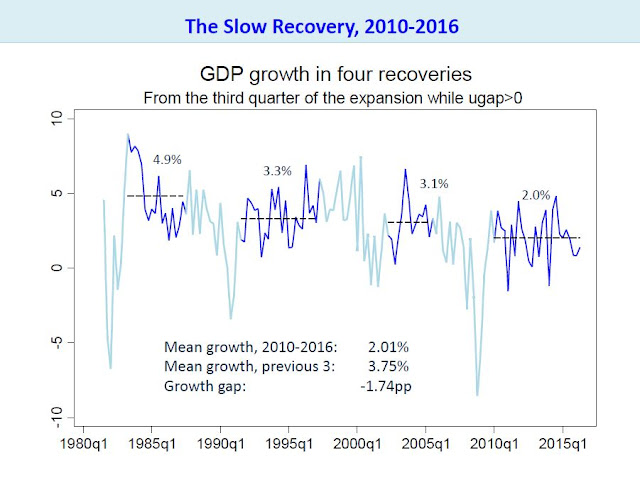 They concluded that the slow growth in the post Lehman Crisis era cannot be blamed on the Great Financial Crisis. Instead, more than half of the slowdown can be blamed on demographic factors and the rest mainly to slower government spending and hiring (annotations in red are mine). 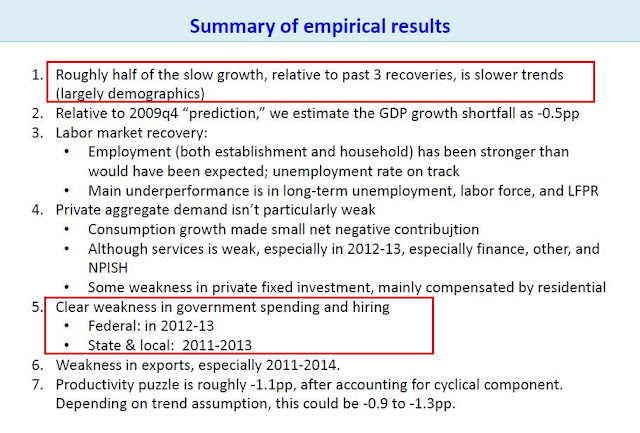 In conclusion, there seems to be a lot of hand wringing and research about the causes of low growth. One of the key culprits seems to be demographics. Indeed, even the mildly hawkish Stanley Fischer gave a nod to demographic influence on the growth environment in a recent speech. In that speech, Fischer acknowledged that the Fed was running out of bullets to fight the next downturn, but the task of raising interest rates was not simple:

I am sure that the reaction of many of you may be, “Well, if you and your Fed colleagues dislike low interest rates, why not just go ahead and raise them? You are the Federal Reserve, after all.” One of my goals today is to convince you that it is not that simple, and that changes in factors over which the Federal Reserve has little influence–such as technological innovation and demographics–are important factors contributing to both short- and long-term interest rates being so low at present.

Even though a December rate hike is more or less baked in, all of these musings are increasingly pointing to some form of “lower for longer”, or even “once and done” approach to monetary policy. Not so fast!

Please take note that even super-dove Charles “don’t raise until you see the whites of inflation’s eyes” Evans, who has bought into the idea of running a “high-pressure economy” is backing off a little from his dovish stance (from his presentation). 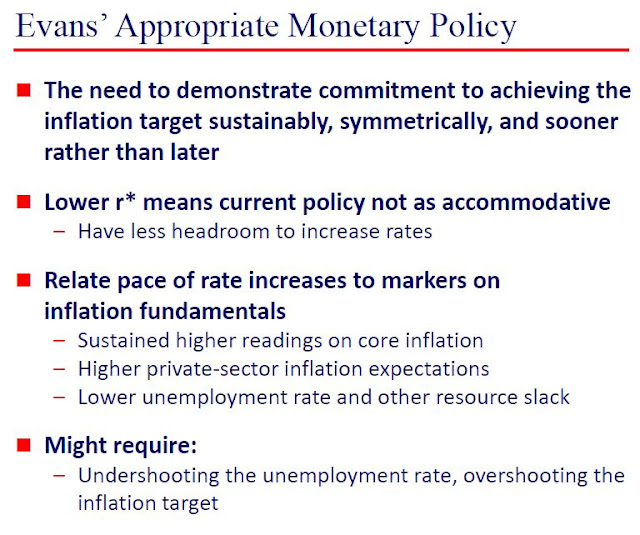 Evan is projecting a December rate hike and two more quarter-point hikes in 2017 (via Matthew B at Bloomberg).

His dot plot is shown in red. 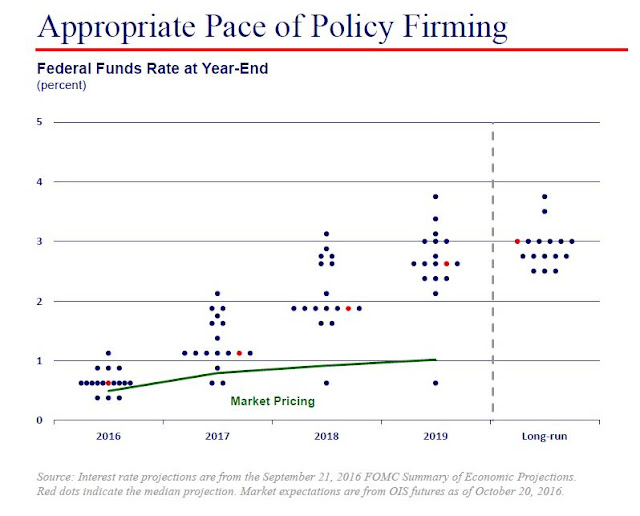 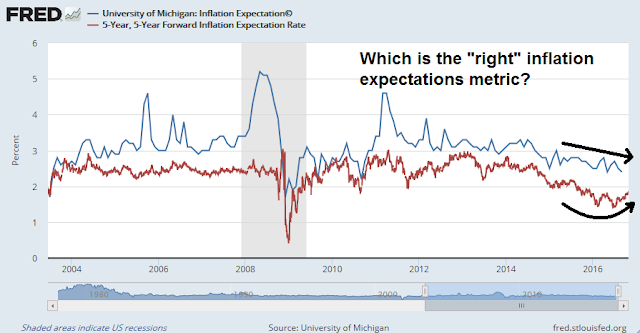 Further, I will be watching for acknowledgement of a low-growth environment, or the problems of low r*. In addition, any references to demographically induced influences on growth will be interpreted as dovish.

6 thoughts on “How high a pressure can the economy take?”