Studies in market psychology: The Debate and Deutsche Bank – Humble Student of the Markets

The market reactions to these themes can hold clues to short-term market direction. 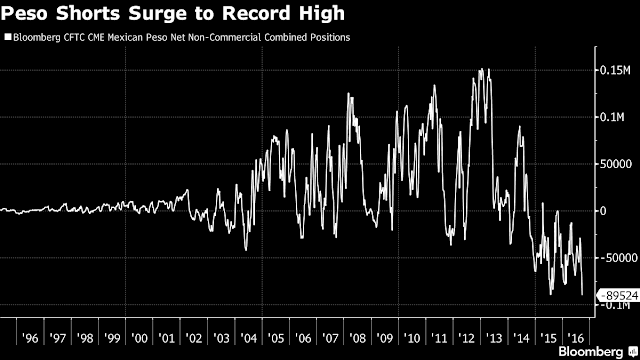 The chart below depicts the USDMXN market reaction to the debate. The peso rallied by about 1.8% overnight. The exchange rate has since stabilized and traded in a relatively narrow range since then. 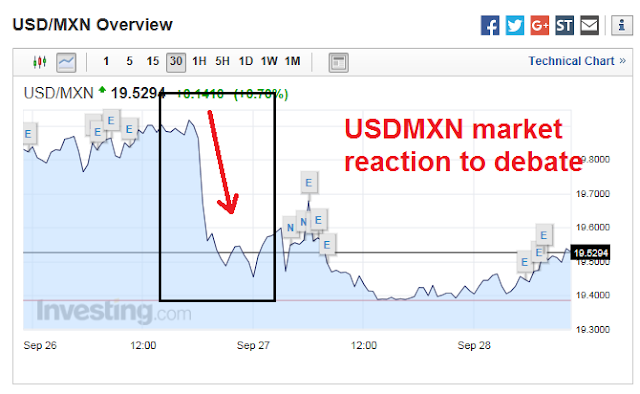 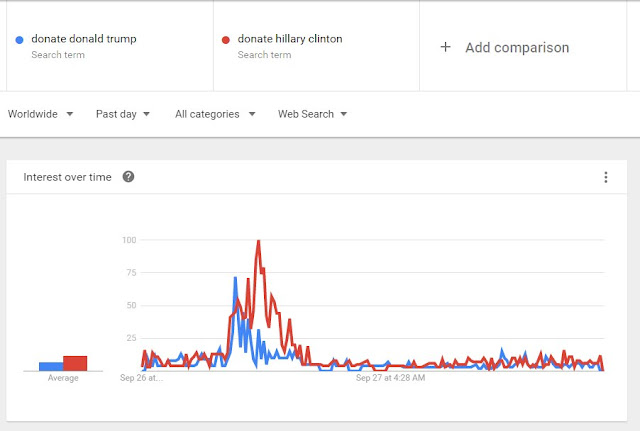 I pointed out on the weekend that Clinton is the status quo candidate and the markets prefer the status quo (see Clinton vs. Trump: Charting the possible market direction), this debate result should be interpreted bullishly for stocks.

However, the electoral road ahead is still likely to be bumpy. Both candidates have extremely high negative ratings by the public. Bespoke recently highlighted a survey of the words that best described Hillary Clinton and Donald Trump. The word cloud for Clinton shows that 15% of the respondents characterized as a “liar”, followed by “untrustworthy”. It isn’t until we get to the third word that we see something that can be characterized as positive: “experienced”. 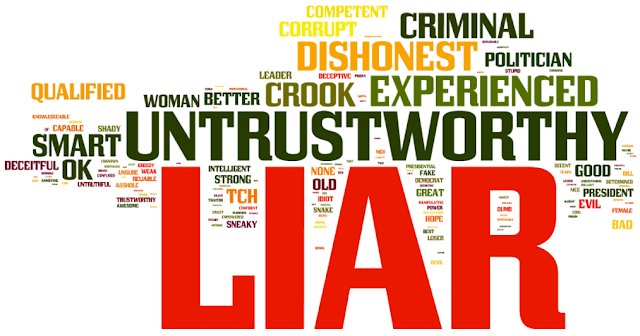 The results for Trump even worse. The top word used to describe him was “idiot”, followed by “a**hole”, “racist” and “arrogant”. 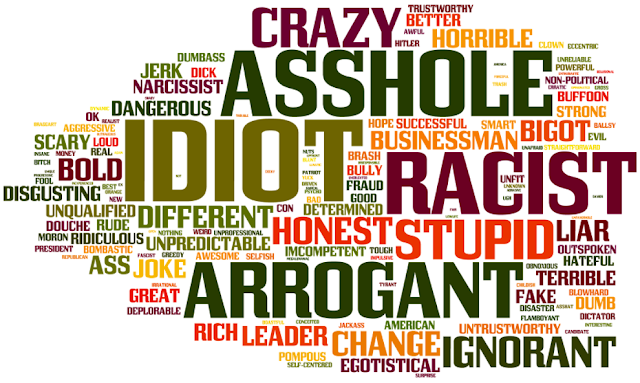 My interpretation of these results lead to the conclusion that the markets will remain on edge until the election. The stock market’s weak rally in the wake of the bullish Clinton debate win also suggests further volatility lies ahead.

One possible reason for the feeble strength of the post-debate rally could be attributable to the news surrounding Deutsche Bank (DB). As the chart below of the DB stock price and its CDS shows, the bank’s misfortunes are no surprise. It’s just that the market appears to have shined the spotlight on DB recently. 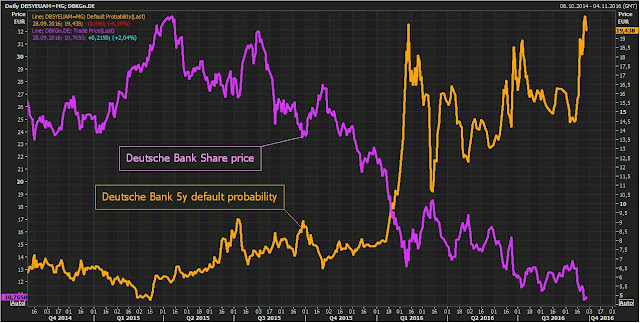 The Telegraph recently featured an article speculating that the Deutsche Bank crisis could take down Angela Merkel – and the euro. The German government has ruled out a bailout of Deutsche for political reasons. If Berlin is against the idea of Italy bailing its banking system, how could it possibly defend a DB rescue? On the other hand, if the financial stability of a large institution like Deutsche were to be viewed as suspect, then market fears could cause the inter-bank market to seize up and spark a banking crisis in the eurozone.

The European markets staged a relief rally early Wednesday when a report by Die Zeit surfaced indicating that the German government was preparing a backup plan to buy as much as 25% of DB should the bank be unable to raise the necessary capital. The German finance ministry swiftly denied the report, but the shares of DB and other European financials appear to have nevertheless stabilized.

From a technical perspective, DB’s troubles does not appear to be at risk of spreading to the European financial sector. The RRG sector rotation chart of European sectors showed that European financials were in the “improving” category. Typically, the next stage in development for financials is to become the new sector leadership over the next few weeks. 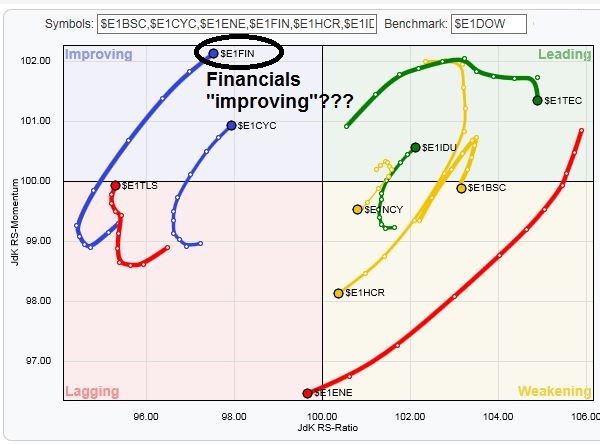 The chart below of the relative performance of the European financials also tells the same story. The sector has been performing well on a relative basis for the past couple of months. Its relative performance is well of the panic lows seen in July, though it remains in a longer term relative downtrend. 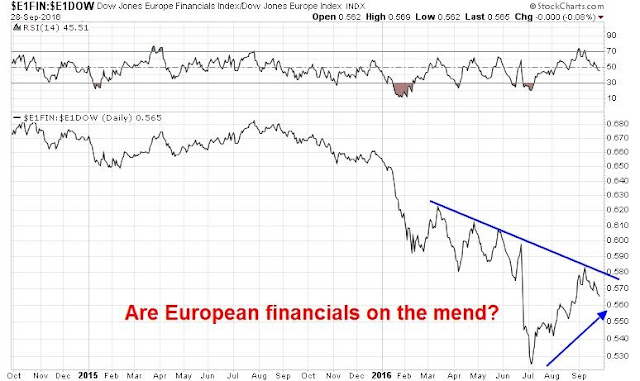 From a technical perspective, European financials appear to be the mend. The market reaction to DB’s problems may be interpreted as a wash-out sector on the verge of recovery.

In the short run, however, the inability of the SPX to rally and test the old highs in light of bullish debate developments and the constructive technical backdrop of European financials is a concern. The hourly chart below shows gaps everywhere that have been filled. The next target is the gap above at about 2172-2178. 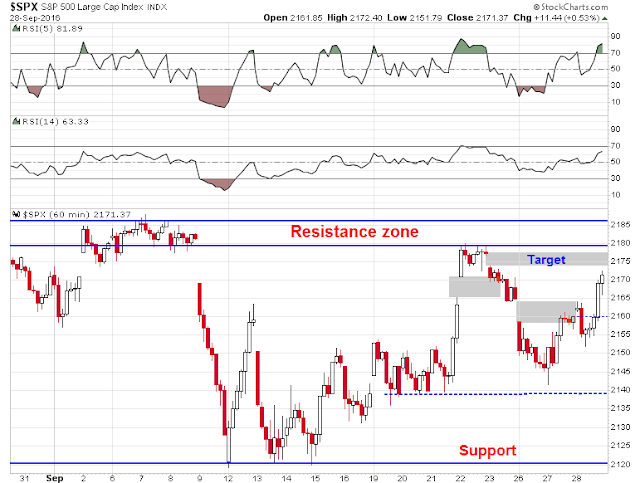 My base case therefore calls for a rally, followed by failure at resistance and a decline back down towards the bottom of the range, either at 2140 or 2120. In other words, expect more choppiness ahead.