A possible Non-Farm Payroll surprise? – Humble Student of the Markets

Mid-week market update: In the wake of Federal Reserve vice chair Stanley Fischer’s remarks about Friday’s Job Report, the market is mainly playing a waiting game for the results of that announcement. However, there are signs that the Jobs Report may be setting up for a negative surprise which could be bullish for bond and equity prices and bearish for the USD.

Firstly, Bloomberg reported that the August Jobs Report has had a record of undershooting the consensus in the last five years. I have no idea whether this represents a statistical fluke or the result of  improperly adjusted seasonal effects. If history were to repeat itself, then expect Treasury yields to sink, bond prices and stock prices to rise, and weakness in the US Dollar. 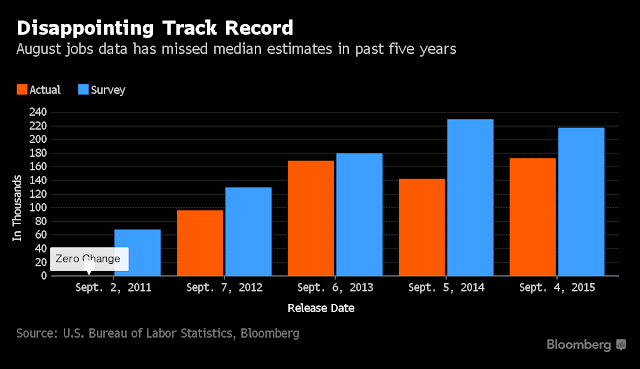 In addition, the preliminary results of my rather unscientific Twitter poll (still time to take the poll) shows the consensus to be heavily tilted towards better than expected Non-Farm Payroll (NFP) figure. If the poll is any way representative of how traders are positioned and the NFP disappoints, then expect a violent market reaction to the upside for stock and bond prices.

Lastly, a Bloomberg story by Luke Kawa suggested that Stanley Fischer may be isolated on the FOMC:

Among the voting members of Federal Open Market Committee, however, it seems Stan is more of the “odd man out,” according to Jefferies LLC Chief Market Strategist David Zervos.

“There seems to be no other ‘relevant’ member of the FOMC that is pushing in [Fischer’s] direction,” he writes. “In fact, both [Atlanta Fed President Dennis] Lockhart and [St. Louis Fed President James] Bullard pushed back on the two-hike notion quite aggressively over the weekend.”

As such, Morgan Stanley fixed income strategists led by Matthew Hornbach are advising traders not to fight the Fed, but to fight the Fischer and buy the dip in the five-year U.S. Treasury bond.

“We think the higher yields that resulted from the market reaction to Vice Chair Fischer’s comments presented an opportunity to buy 5-year notes at better levels than what we earlier suggested,” they write. “While August payrolls present an obvious risk, we continue to believe market-implied probabilities for a September rate hike will end at zero, not 100.”

Analysts are now wondering whether Fischer, who was once seen as something of a “shadow” Fed Chair given his illustrious resume, has become somewhat removed from the consensus view at the central bank.

Notwithstanding the results of the August Jobs Report, current expectations of a possible September rate hike may be far less probable than market expectations. It would also set the market up for a more bullish undertone to both stock and bond prices for the remainder of the year.