How bad could a Chinese banking crisis get? – Humble Student of the Markets

In my last post (see The roadmap to a 2017 market top) I wrote that one possible bear market trigger would be a debt crisis in China. In response, an alert reader sent me this Bloomberg tweet and asked for my comment. 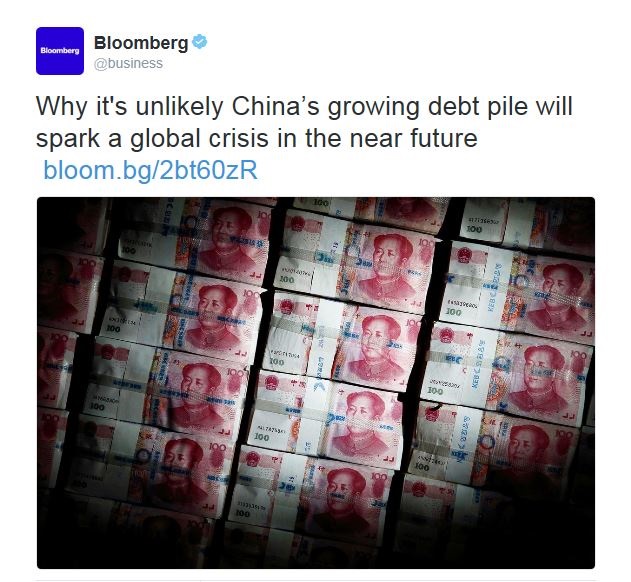 How bad could a China debt crisis get? In this post, I try to model the global effects of a China hard landing.

The banking system figures look scary. Bruegel pointed out that the Chinese banking system is now the largest in the world. We have all seen the stories about the white elephant infrastructure projects and see-through buildings financed with government mandated loans. What happens if the Chinese economy hits a debt wall and all of those bad debts have to get paid back?

First of all, the global impact of a Chinese debt crisis should be limited as most of the debt is yuan denominated. The latest report shows that China has USD 1.36 trillion, of which USD 849 is short-term debt. A China debt implosion will be very different from previous emerging market debt crisis given the immense size of China’s foreign currency reserves.

In a banking crisis, the external debt that is most at risk is short-term debt because the borrowers need to periodically roll over the amount owing. Assuming that 50% of the short-term external debt goes bad and lenders recover 70% of the value owing, bad debt writedown would amount to USD 127 billion. If the losses were to be concentrated in just a few lenders, it would undoubtedly cause panic and possibly strain the global financial system. On the other hand, the pain would be quite manageable if it were spread among many lenders. For some context, USD 127 billion is a blip compared to the $13 trillion loss suffered by equity investors in the minor market correction of September 2015 (chart via Zero Hedge). 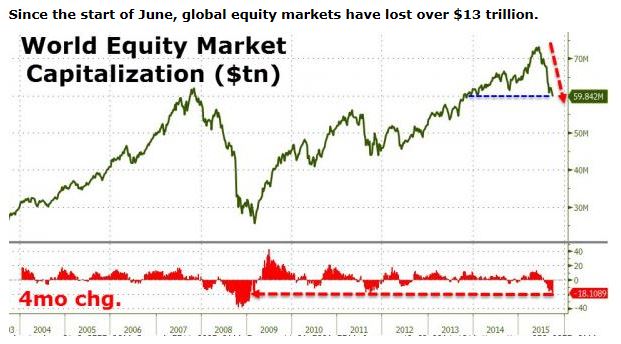 In addition, the Bloomberg article cited in the above tweet pointed out that most of the debt is corporate debt, and much of the corporate debt have been issued by State-Owned Enterprises (SOEs). Therefore Beijing has is far more flexible in how it mitigates the damage:

If overwhelming debt does trigger a crisis in China, it’s more likely the spark would come from corporations and their main creditors, the banks. China’s bond market has shown signs of growing stress, including 17 defaults through June 30, almost triple the number in 2015. That and a series of delayed payments prompted rising credit spreads and cancellations of new issues…

China is different from other markets in an important way. Many large corporations and nearly all the major banks are state-owned. In other words, the debtors and creditors are ultimately owned by the same entity. That means the country could address debt problems in some unusual ways. One scenario is the state could take from the prosperous—coastal regions or high tech, for example—and give to the struggling. Another is that the government could simply cover debt. Some unprofitable state-owned enterprises are supported by lending from their banks essentially to keep employment at acceptable levels. Such debts could eventually be absorbed by the state as part of its social welfare expenditures.

I agree 100% with that assessment. The Chinese authorities have many tools available to address tail-risk, mainly by socializing the costs. But investors should still remember that someone still has to pay the price of the debt writeoffs. At the end, the most obvious candidate is the household sector. Cost socialization will come at a price of a much lower growth trajectory. Expect a lost decade of Chinese growth should Beijing choose such a strategy.

Under such a scenario, what are the global growth effects through a downshift in trade? A separate Bloomberg article detailed the exposure of China’s major Asian trading partners. In Asia, the economics of Singapore, Taiwan, Vietnam, South Korea, Malaysia, and Thailand would be most affected. Expect those countries, plus Hong Kong, to fall into recessions. 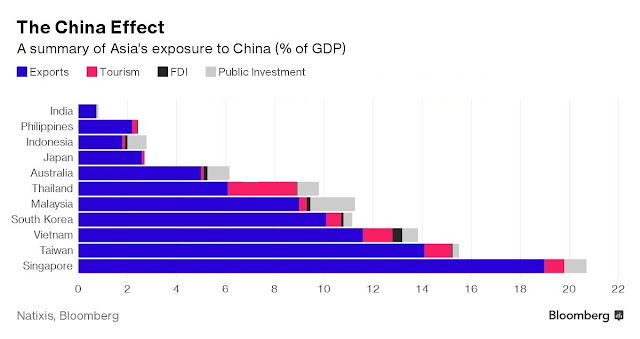 Commodity producing countries such as Australia, Canada, and Brazil would also be hard hit. China will need a lot less copper, iron ore, nickel, chemicals, and other natural resources because infrastructure spending would come to a screeching halt. In addition, Chinese real estate investment demand in places like Sydney, Melbourne, Vancouver, and Toronto would tank and put substantial pressure on the banking system in those countries as bad loan provisions pile up.

What about Europe? A European Commission document revealed the nature of European Union trade with China. EU exports to China amount to roughly 1.2% of GDP. At least half of the exports are in the form of capital goods, most of which come from Germany. 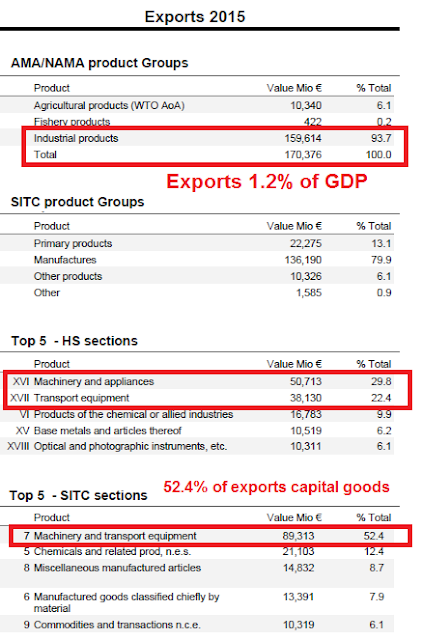 If China were to socialize the costs of a banking crisis through socialization, then Chinese GDP growth would fall substantially and so will imports. Pencil in a decline in EU exports to China of between one-third and one-half, that amounts to a reduction of between 0.4% to 0.6% of EU GDP.

Could Europe fall into recession under such circumstances? At first glance, direct trade effects would be negative but may not be enough to push Europe into recession. However, the secondary effects of such a trade shock could be more substantial. Much of the burden of the collapse in Chinese trade would fall mainly on Germany, which has been an export powerhouse. In response, German domestic demand would crater, and that would also have a negative domino effect on her European trade partners. In addition, how will the already fragile European banking system handle a recession of this nature? Much of the European bond market already have negative interest rates, will the ECB be out of bullets in the face of such a slowdown?

From a global perspective, the one silver lining of a Chinese banking crisis scenario is the US. The value of US exports to China amounts to a minuscule 0.6% of GDP, which represents a minor and survivable hit to growth.

A scenario, not a forecast

In summary, I have modeled the consequences of a Chinese banking crisis and slowdown. Even assuming minimal disruption through financial linkages, the negative effects through the trade channel would still be quite substantial. Much of Asia along with commodity exporting countries would fall into recession. The European economy would teeter on the edge. The US would have the least exposure.

I would add the caveat that this is only a scenario, not a forecast. However, I give the last word to Michael Pettis on the risks and the timing of a possible Chinese banking crisis:

Even after overwhelming the analysis with implausibly optimistic assumptions – discounting the disruptions caused by shifting strategies, for example, assuming financial distress costs are close to zero, and ignoring the impact on debt sustainability that results from rolling over a significant share of total loans that cannot be repaid – it is pretty clear that without a major change in policy or a tolerance for slower GDP growth it will be hard to prevent debt from becoming unsustainable. At some point, and my guess is that this would occur within the next two to three years at current growth rates, China runs the risk of a very disruptive adjustment as it reaches debt capacity limits, perhaps even the risk of negative GDP growth rates.

Pettis wrote those words on June 22, 2016. He expects a “disruptive adjustment” within 2-3 years under relatively optimistic assumptions.

3 thoughts on “How bad could a Chinese banking crisis get?”