Is Chinese growth stalling? – Humble Student of the Markets

I have long had much respect for the folks at Lombard Street Research (LSR) for their unusual non-consensus calls. Back in the days of the Tech Bubble when everyone was focused on the likes of Cisco Systems, Lucent, Nokia and other technology darlings, they had said “watch China” as the next engine of growth. That turned out to be the Big Call that made me forever remember them.

It was therefore with great interest when a Bloomberg story came across my desk indicating that LSR believed that China may be in a liquidity trap. While Chinese M1 growth has been picking up sharply, LSR`s estimate of the growth the broad money M3 has been slowing, which led to the conclusion of a possible liquidity trap. 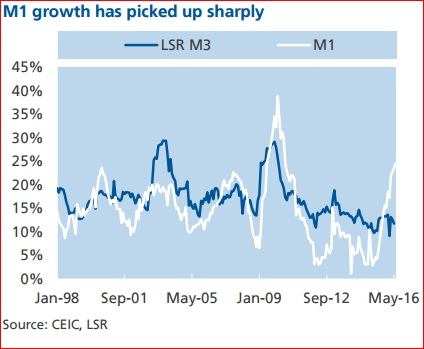 In a research note published on Monday, she writes: “Over the past two quarters, the PBOC has injected liquidity in excess of capital outflows. But our measure of broad money, which is the best indicator of overall monetary conditions, has deteriorated on a year-on-year basis, and fell below its level in 2013-14 and the government’s target.”

Lombard’s ‘M3’ calculation uses the official, so-called ‘M2′ measure, which is a broader measure of money than what’s known as M1, since it includes time deposits as well as cash and current deposits. In order to calculate M3, Lam adds in deposits that are excluded from mere M2, in addition to banks’ stock of bonds, and foreign liabilities.

The monetary picture is complicated further by the fact narrow money growth, or M1, has continued to soar in recent months, diverging with broad money growth.

Lam reckons the private sector is becoming increasingly unresponsive to M1 growth, with it either hoarding liquidity in deposits or deploying it to repair balance sheets.

“The divergence between narrow and broad money growth just highlights how difficult it has become for Beijing to generate growth by throwing money at firms that are unwilling to invest. Stimulus has boosted growth but has few second-round effects, and money is just not being passed around,” she says.

Indeed, LSR`s estimates of Chinese GDP growth has rebounded and now holds steady at about 6%: 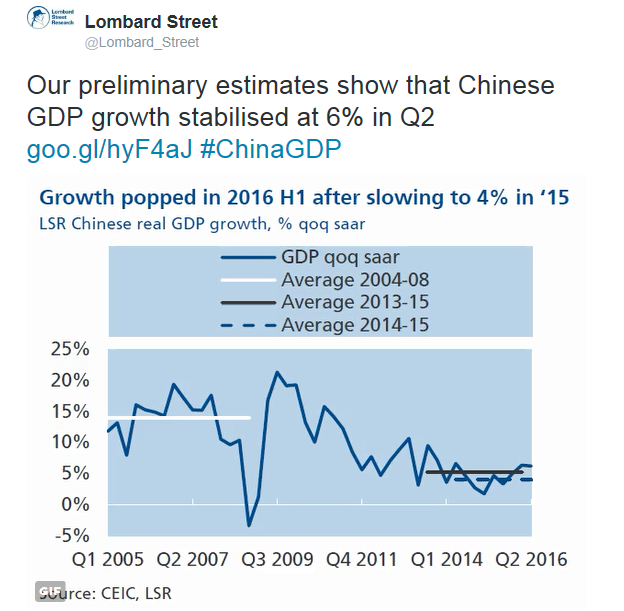 …but growth was propped up by the same-old-same-old investment by State Owned Enterprises (black line) while the private sector (white line) has pulled back: 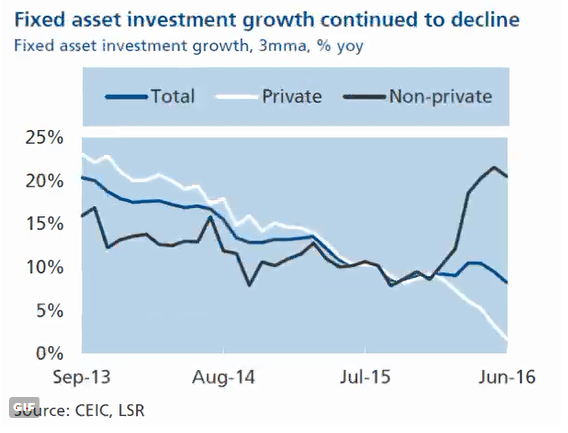 The latest round of debt-fueled investment driven growth have led many analysts to wonder how long Beijing can continue to play the game of artificially boosting growth as it faces diminishing returns to each yuan of stimulus (via Reuters):

Analysts say that determination has come at the cost of a damngerous rise in debt, which is six times less effective at generating growth than a few years ago.

“The amount of debt that China has taken in the last 5-7 years is unprecedented,” said Morgan Stanley’s head of emerging markets, Ruchir Sharma, at a book launch in Singapore. “No developing country in history has taken on as much debt as China has taken on on a marginal basis.”

While Beijing can take comfort that loose money and more deficit spending are averting a more painful slowdown, the rapidly diminishing returns from such stimulus policies, coupled with rising defaults and non-performing loans, are creating what Sharma calls “fertile (ground) for some accident to happen”.

From 2003 to 2008, when annual growth averaged more than 11 percent, it took just one yuan of extra credit to generate one yuan of GDP growth, according to Morgan Stanley calculations.

A new definition of Money

While these developments are worrisome, let me my two cents worth to the data. As someone of Chinese extraction, I can personally attest to the fact that there is a special affinity in Chinese culture to property investment.

The Chinese attitude towards property and the behavior around property is foreign to western culture. As the property bubble grew over the years and analysts wrung their hands over vacant see-through buildings (and therefore billions and billions in non-performing loans), there was a mitigating factor that the Chinese viewed real estate as a store of wealth – call it M3*. In fact, some preferred to leave apartments bought as investment vacant, much as a coin collector might view an un-circulated coin as more valuable. Moreover, the property tax regime encouraged this kind of investment behavior, as property taxes tended to be levied upon sale, rather than as a “wealth tax” for city services as they are in the west.

This attitude towards real estate can also be seen in banking practices. Rather than lend on the ability to service cash flow, as is practiced in the west, Chinese lenders tend to lend on asset value. That’s because accounting statements can be fudged, but asset values are *ahem* solid.

Callum Thomas documented the Chinese attitude towards investment preferences. As the chart below shows, bank deposits and WMP have tended to take the lead, largely because of the minimal investment size required. However, property (orange line) has held steady at about 15% over time. 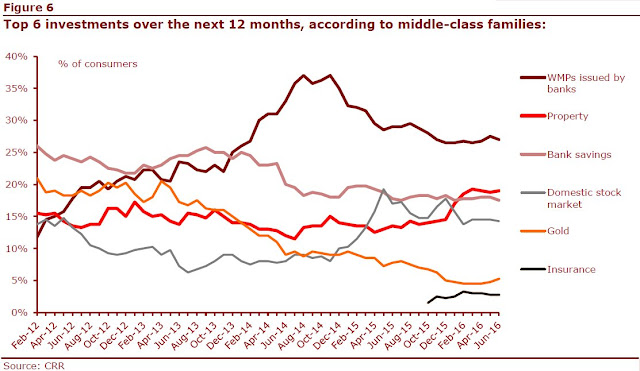 I would therefore argue that in China, property is a form of money. In light of LSR’s liquidity trap thesis, monitoring what happens to property as money growth (M3* = M3 + real estate) is an important concept in determining the future path of the Chinese economy.

Recently, alarm bells have been ringing over the outlook for China again. Goldman Sachs recently warned that China`s augmented fiscal deficit has ballooned to 15% of GDP. 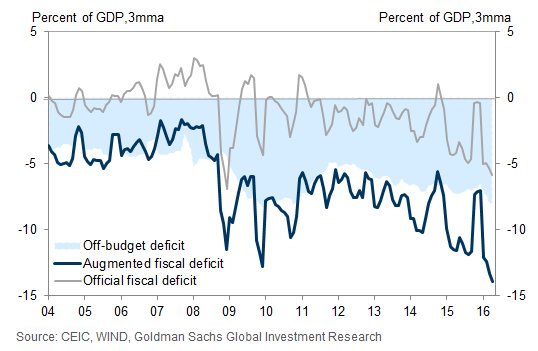 These signs of sputtering growth and an economy that is becoming less responsive to official stimulus are worrisome signs. These are indications consistent with the Michael Pettis thesis that China has about two years left before it must face some painful adjustments (see How much “runway” does China have left?).

The big macro question then becomes, “Is China on the edge of another crisis?” To answer that question, the combination of LSR’s liquidity trap thesis and my observations about property as a form of money leads me to believe that M3* will be an important tool to measure the outlook for China. 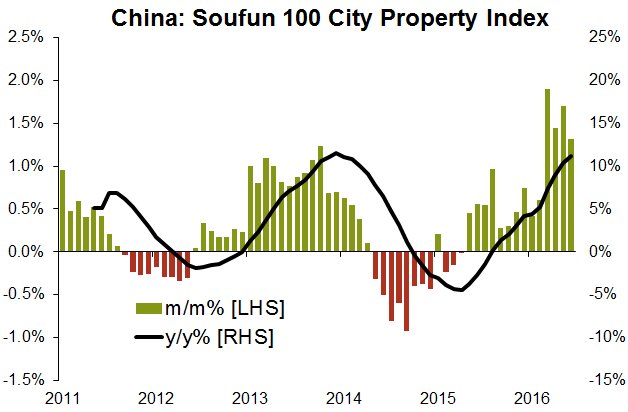 Not so fast! Dissecting the property market data further, Tom Orlik found that Tier 1 prices were starting to wobble, but the other cities were enjoying health gains. While the real estate market appears to be healthy on the surface, the weakness in Tier 1 cities is something that needs to be watched carefully.

Tactically speaking, my conclusion is, “So far, so good.” Despite the apparent liquidity trap, the risk of imminent risk of collapse is minimal at the moment. However, the health of the Chinese property market will have to be watched carefully in the future.

9 thoughts on “Is Chinese growth stalling?”