What’s spooking the stock market? – Humble Student of the Markets

Mid-week market update: No, it isn’t just a more hawkish Federal Reserve that’s spooking the stock market. Stock prices were been falling before Fedspeak and the latest FOMC minutes sounded a more hawkish tone. The SPX staged a successful test of its 2040 neckline support of its head and shoulders pattern today. In fact, today`s action could be interpreted constructively as it is experiencing a minor positive divergence on RSI-5. 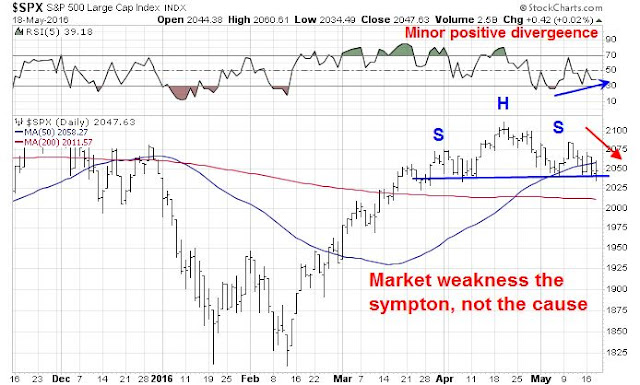 Don`t blame the Fed. Market weakness is a symptom, not the cause of the retreat.

I turned more cautious on the stock market last week because of growing market fears of a slowdown in China (see Tactically taking profits on the commodity and reflation trade). There seems to be a bifurcation starting to occur in the global economy. The US macro picture looks fine as the American economy is motoring along, as evidenced by the latest news of the April rebound in industrial production. Outside the US, the picture looks far less rosy.

The latest BoAML Fund Manager Survey revealed the top two tail-risks on fund managers’ minds were Brexit and China, which did not appear as a source of concern in the previous month’s survey. It’s no wonder that the markets are getting spooked. 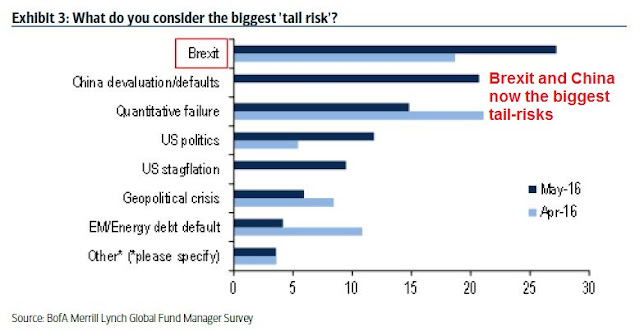 Here’s how I am preparing myself and how I would watch for the turn upwards, should it come.

Waiting for the turn in China

I’ve written enough about China that I am not going to repeat myself (see A better way to trade the China slowdown). The two main market signals over Chinese growth concerns come from the weak performance of the Chinese stocks and the stock indices of China’s major Asian trading partners. All indices, except for Australia, are below their 50 day moving averages (dma). 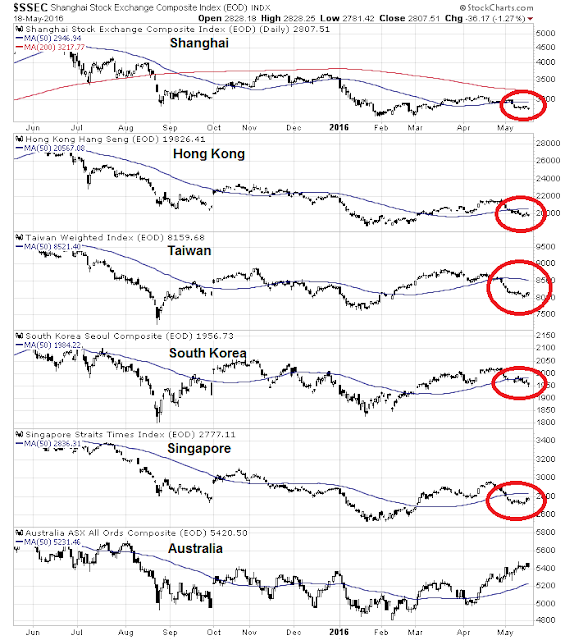 As well, the cyclically sensitive industrial metal complex has also not performed well, which is another sign of decelerating Chinese growth.

I am monitoring these two charts for signs of stabilization and improvement before trying to call a turn in China.

Then, there are the Brexit risks, which had been lurking in the background for the past few months. It wasn’t until I turned my sights to the UK that I realized the high level of angst in Britain. Gavyn Davies documented that the nowcast of growth estimates had cratered from 2.5% to roughly 0% today. 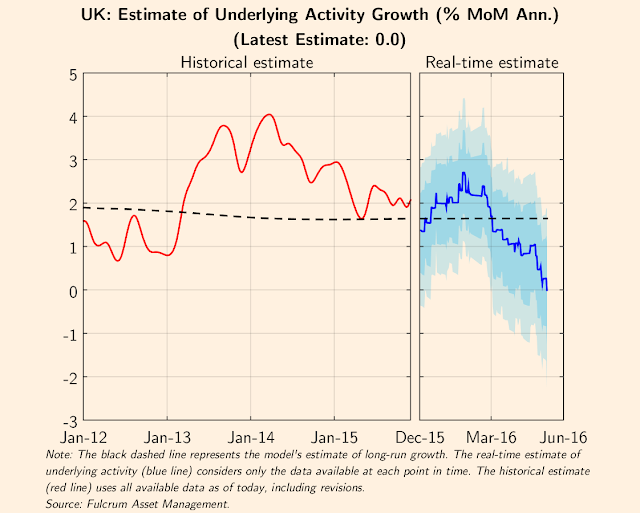 Davies wrote that the most likely explanation for the slowdown is concerns over Brexit:

Since this has occurred at a time when there has been no similar decline in the advanced economies as a bloc, it seems that the drop has been driven by something specific to the UK. The only obvious candidate for this is uncertainty surrounding Brexit, leading to postponment of investment and consumption decisions.

He went on to state that the nowcast is showing a 40% chance of a UK recession:

The nowcast model, which of course does not take account of the specific circumstances surrounding the referendum, already estimates that there is a 40 per cent likelihood of a recession in the UK in the next 12 months. This probability could rise further if uncertainty is maintained at high levels before or after referendum day.

It is now wonder that the FTSE 100 has struggled and fallen below both its 50 and 200 day moving averages.

Across the English Channel, the Euro STOXX 50 has also been weak in sympathy despite the encouraging signs of a eurozone growth revival. A recent Fitch report, however, indicated that Ireland, the Netherlands, Malta and Cyprus to be the most vulnerable eurozone countries to a Brexit event.

While the latest polls are all over the place, bookmaker odds show a solid lead for the Remain side. 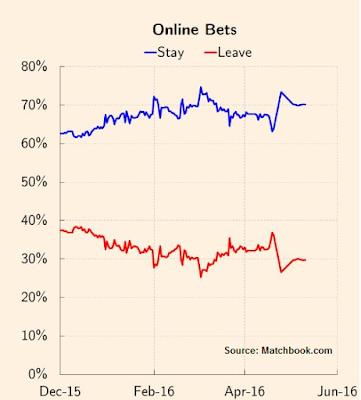 I have no idea of how the China macro outlook is going to develop in the next few months, but if the bettors are correct, then we are likely to see a huge relief rally should the Remain side prevail in the June 23 Referendum. These conditions also suggests that global markets will be choppy and stay unsettled until the Brexit referendum is resolved in late June.