China has been undergoing a series of stop-start growth spurts mini-cycles, courtesy of credit driven stimulus programs (chart via RBS): 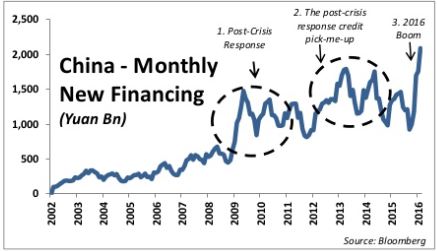 The size of the latest Q1 financing induced boom was extraordinary, as it hinted at panic by the authorities. For some perspective, credit expansion in Q1 2016 was somewhere between the GDP of Indonesia and Mexico: 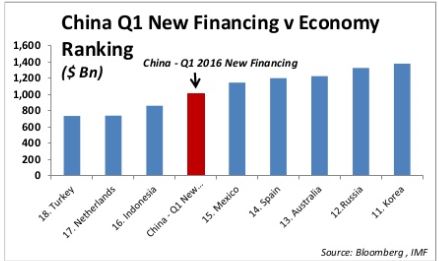 Much of the extra liquidity sloshing around the system has created a great ball of money that has bounced around from one asset class to another, such as property, stocks and commodities.

Coming off a sugar high

I have written about the market fears of China slowdown before (see Tactically taking profits in the commodity and reflation trade), the data coming from last weekend seems to confirm that the sugar high of credit driven stimulus is starting to wear off (via Bloomberg):

The April readings marked a sharp swing in fortunes, especially in new credit: where March saw aggregate financing jump by more than all economists had forecast, April’s number undershot all 26 predictions. Such gyrations — long a feature of the nation’s stock market — add to the challenge for policy makers and foreign investors seeking to get a read on an economy caught in a multi-year slowdown and struggling to stabilize. 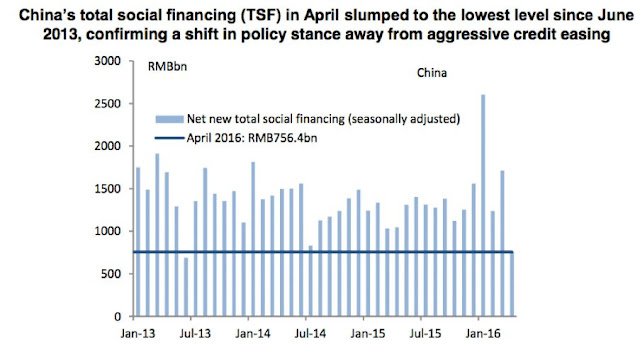 Things got so bad that the PBoC felt compelled to reassure the markets that it would continue to support the economy through monetary policy (via Bloomberg):

China’s central bank reassured investors that monetary policy will continue to support the economy after a sharp slowdown in new credit last month, and said the lending slump was temporary.

The deceleration in the growth of new yuan loans in April was mainly due to a pick-up in a program to swap high-cost local government debt for cheaper municipal bonds, the People’s Bank of China said in a statement on its website on Saturday. No less than 350 billion yuan ($53.6 billion) of such swaps were conducted last month, while aggregating financing growth was affected partly by a decrease in corporate bond issuance, according to the central bank.

The screeching halt in credit driven stimulus appears to have come from the top, as a recent article in state-owned People’s Daily quoted an unnamed “authoritative figure” (read: high level official) stating that China should expect an L-shaped growth path. Further, credit driven growth was the “original sin” that leads to market risks (via Xinhua):

China’s economy will follow an L-shaped path as downward pressures weigh and new growth momentum has yet to pick up, the People’s Daily on Monday quoted an “authoritative figure” as saying in an exclusive interview.

The country’s economic growth, which slowed to its lowest level after the global financial crisis, will not see a U-shaped or a V-shaped rebound, but follow an L-shaped path going forward, the source said.

The People’s Daily, flagship newspaper of the ruling Communist Party of China, did not disclose the name of the source, but the term “authoritative figure” is usually used for high-level officials.

The source said China’s economic growth has been stable and “within expectations,” but warned of emerging problems such as a real estate bubble, industrial overcapacity, rising non-performing loans, local government debt and financial market risks.

High leverage is the “original sin” that leads to risks in the market for foreign exchange, stocks, bonds, real estate and bank credit, the person was cited as saying.

According to the authoritative figure, the country should make deleveraging a priority, and the “fantasy” of stimulating the economy through monetary easing should be dropped. The country needs to be proactive in dealing with rising bad loans, rather than hiding them.

In addition, the South China Morning Post reported that Xin Jinping lectured party cadres in January about misguided perceptions about the intent of supply side reforms. Chinese supply side reform is not intended to be in the Reagan/Thatcher mold, but structural reform of “cutting capacity, reducing inventory, cutting leverage, lowering costs, and strengthening the weak links” (translation: don’t borrow to make and build so much stuff that no one wants):

Xi said some Chinese officials did not understand the point of supply-side reform.

“I highlighted the issue of supply-side structural reform at last year’s central economic work conference, and it triggered heated debate, with fairly good endorsement from the international community and various sides at home,” Xi said.

“But some comrades told me that they didn’t fully understand supply-side reform … I need to talk about this issue again.”

“Our supply-side reform, to say it in a complete way, is supply-side structural reform, and that’s my original wording used at the central economic work conference,” Xi said.

The key problem for the Chinese economy was “on the supply side”, though China could not afford to completely neglect managing demand.

China could not rely on “stimulating domestic demand to address structural problems such as overcapacity”, he said.

“The problem in China is not about insufficient demand or lack of demand, in fact, demands in China have changed, but supplies haven’t changed accordingly,” Xi said.

He gave the example of Chinese consumers shopping overseas for daily products such as electric rice cookers, toilet covers, milk powder and even baby bottles to show that domestic supply did not match domestic demand.

More importantly, Xi acknowledged that China faces big problems as it is “big but not strong”, which is evocative of Mao’s characterization of America as a “paper tiger“ during the era of the Vietnam War:

Xi said while China was the second-biggest economy in the world, its economy was “big but not strong” and faced “outstanding problems of unwieldiness, puffiness and weakness”.

A separate SCMP article hinted that the “authoritative figure” quoted was none other than Comrade Xi himself:

Yes, the “authoritative person” was Xi, judging from three revealing words in the interview: “kai men hong,” which literally means “open the door to see red lucky sight,” referring to a good start.

“Our economy is seeing unexpected new problems,” the person in the interview said. “It cannot be described with simple concepts like kai men hong … Our economic trend is not U-shaped and absolutely not V-shaped. It is L-shaped. It is not going away in a year or two.”

Take that as a resounding slap on the face for Politburo Standing Committee member and Vice Premier Zhang Gaoli, who is in charge of the economy. In a public conference in late March, Zhang said: “From the numbers, I expect kai men hong in the first quarter. This year we tackle the difficulties. Next year will be blue sky and gentle water.”

Now, who but Xi could have trashed the vice premier’s sunny projections so bluntly? The president is eager to push through his “supply-side structural reform,” trimming excess production capacity to free up resources for the right goods and services. 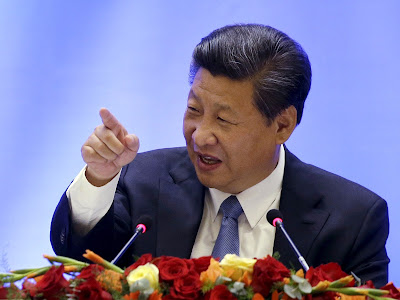 After all the anti-corruption purges, which are still ongoing, Xi is asserting his political power in a strongest way with the use of cultural revolution era terms:

“There are careerists and conspirators in our party undermining the party’s governance … We must respond resolutely to eliminate the problem.”

During one of the darkest periods of Chinese history, words like careerists and conspirators used to be reserved for leaders such as Lin Bao, the successor-designate of Mao Zhedong who allegedly tried to kill Mao.

Xi gave the speech to graft fighters in January. Whatever the rationale of publishing the speech four months later, the message is clear: Fall in line, or else.

Here is my takeaway of what Xi wants:

Under these circumstances, the reversal of Q1 credit driven growth is unlikely to be followed by the usual stop-start mini-cycle. What Comrade Xi wants, Comrade Xi gets. Instead, he is looking for better quality growth.

For traders and investors, it will harder to forecast the near-term trajectory of Chinese growth. However, there is a far more risk-controlled way of trading the longer term China growth slowdown, namely the theme of re-balancing growth away from credit (finance) to the consumer.

This re-balancing theme brings up a couple of pairs trade opportunities, where an investor or trader buys a position and shorts an offsetting one. The conceptual pair trade is a long consumer China vs. a short finance China trade. I have been watching two possible pairs for quite some time as ways of playing this theme:

Here is a chart of the two pairs (PGJ-FXI in black, CHIQ-CHIX in green). All of these ETFs are US-listed and trade in USD. If you would like to follow along at home, use this link for a real-time update.

For Xi, it is good to be the undisputed top dog in a command economy, as you can get what you want. For investors and traders, these pair trades represent reasonably risk-controlled ways of trading China by playing along with Comrade Xi`s edicts.

2 thoughts on “A better way to trade the China slowdown”