How vulnerable is the market to dwindling buybacks? – Humble Student of the Markets

After I wrote my last post about the GAAP gap, which addressed many of the concerns about shortfalls in earnings quality (see The GAAP gap as Rorschbach test), I had a number of discussions about the vulnerability of the stock market to buyback activity. I had been meaning to write more on this topic, but Cullen Roche and Ben Carlson both beat me to it with some balanced perspectives on fundamentals behind buybacks. Nevertheless, here is my two-cents on the topic.

The concerns about buybacks gained prominence from a post from Josh Brown, who highlighted analysts from HSBC showing that buybacks accounted for much of the equity demand since 2008. As the market enters a buyback blackout period during Earnings Season, could the stock prices weaken as this key demand slackens?

Despite the above chart, the relationship between buybacks and equity returns is tenuous at best. Let me explain why.

Why do companies purchase their own shares?

Let’s start at the beginning. Why do companies buy their own shares. Share buybacks can be thought of as a return of capital to shareholders. Companies can do return capital by way of buybacks, or dividends.

The cash for dividends and buybacks either come from the excess cash flow generated from operations, or debt. But isn’t borrowing to pay dividends or buy back stock a bad thing to do?

Not necessarily. Interest expense on debt is tax deductible, while dividends and share buybacks are financed with after-tax dollars. With interest rates so low, is it any surprise that corporate management are putting debt on the balance sheet in order to maximize shareholder returns? As a sign of the times, Ireland sold a 100-year bond at an astounding yield of 2.35% last week (via Bloomberg). In February, Apple took advantage of the low rate environment and sold a 30-year bond at a yield of 2.05% in order to “return capital to shareholders” (via Bloomberg).

Doesn’t all this increased debt represent a ticking time bomb? Eric Bush at Gavekal pointed out that corporate leverage doesn’t seem that excessive compared to past history. Sure, debt levels are elevated, but they are below historical norms. 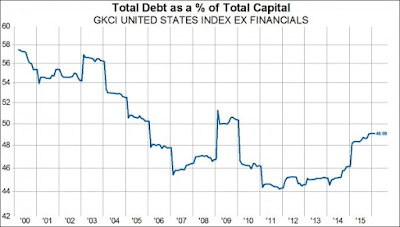 In a subsequent post to the one above highlighting the influence of buybacks, Josh Brown referenced a paper by Michael Mauboussin studying the issue. Brown concluded:

Probably the best way to think about dividends vs buybacks is not to think of them as facing off against each other, but as working in concert to return capital to shareholders when there is no better use for it. Meb Faber calls this combination “shareholder yield”. But still, it’s also worth thinking about buybacks as being market-following and mercurial, versus dividends as being steadier and, often times, more responsible.

Despite Mauboussin`s assertions, the historical record is unclear whether a tilt towards buybacks or dividends yield useful market signals. The chart below shows the relative returns of the high backback ETF (PKW) against the high yield ETF (DVY). The market has undergone several regime changes in the nine-year history of this pair. High buyback stocks have beaten high yielding stocks for most of this period, but they have also undergone prolonged periods of range-bound relative performance. 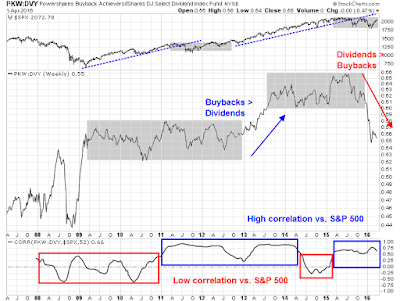 For a different perspective, Ben Carlson at A Wealth of Common Sense framed the buyback vs. dividend narrative this way:

The problem with the buyback story is that the narrative would be totally different if all of that money was being used as dividends. We would be seeing headlines about how mom and pop are propping up the market by re-investing their dividends back into their mutual funds. In the grand scheme of things buybacks and dividends are basically identical to the end investor (see Stock Buybacks Demystified).

Spot the pattern
As for the fears that the upcoming buyback blackout period could depress stock prices, Urban Carmel recently showed the SPX returns (circled) during 1Q Earnings Season blackout periods. Do you see a pattern? (Remember we are analyzing market behavior during the circled periods, not before or after).

Here is the same chart for the 2Q Earnings Season blackouts. Spot the pattern for me.

Now, stop reading Zero Hedge and tell me again: Why are you worried about buybacks depressing stock returns?

3 thoughts on “How vulnerable is the market to dwindling buybacks?”