How the BOJ disturbed my vacation – Humble Student of the Markets

The BOJ’s announcement of a retreat from yield curve control by allowing the 10-year JGB yield to rise from 0.25% to 0.50% shocked markets. The widowmaker trade of shorting JGBs finally worked, but it happened when a lot of traders had shut down their books and went on holidays. The move cratered the JGB market, pulled down other major bond markets around the world, and sent the Japanese stock market reeling. Other equities markets fell in sympathy, but the contagion effect was limited as the bond rout steadied and stock markets rebounded.
My usually reliable S&P 500 Intermediate-Term Breadth Momentum Oscillator (ITBM) had flashed a sell signal on December 7, 2022 when its 14-day RSI recycled from overbought to neutral. I wrote that a reasonable exit strategy is to either wait for the 14-day RSI or the Zweig Breadth Thrust Indicator to become oversold. Coincidentally, both were triggered just before the BOJ announcement. 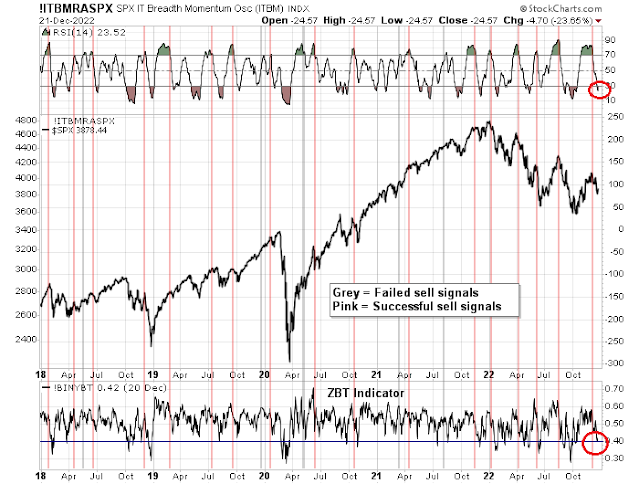 It appears that the Santa Claus rally may be just starting. The traditional Santa rally begins the day after Christmas and lasts until the second day of the new year. It also coincides with the end of tax loss selling season. After investors dump their losing positions, which there were many in a dismal year, the sale candidates often rebound as selling pressure abates (see last week’s commentary, All that’s left to do is to wait for Santa Claus). 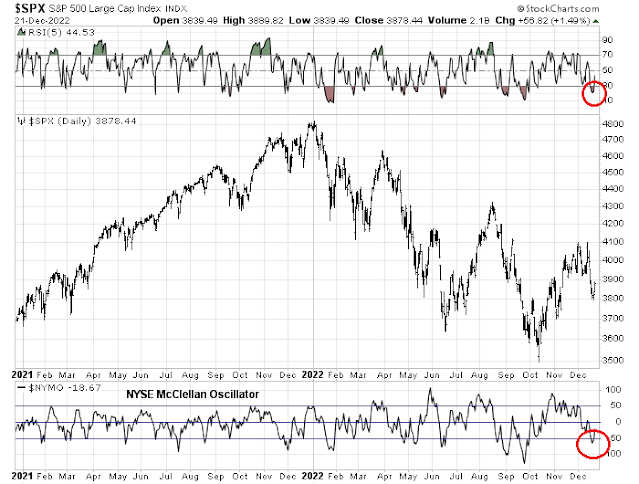 It appears that Santa is readying for his sleigh ride. Under normal circumstances, my inner trader would enter a speculative long position in small-cap stocks, which have recently underperformed. But I am traveling and I don’t really have time to monitor any positions so I’ll step aside, but that doesn’t mean that nimble traders who are still at their desks can’t be buying here.

1 thought on “How the BOJ disturbed my vacation”