A Jackson Hole preview: Are expectations finally rational? – Humble Student of the Markets

The Federal Reserve’s annual Jackson Hole symposium is being held this week on August 25-27. Fed officials have fanned out across the land to deliver the message that market expectations of a dovish pivot are misplaced. The question for investors is, “Are market expectations finally rational?”

The CME’s Fedwatch tool shows the market expects two consecutive 50 bps hikes in September and November, followed by a 25 bps hike and a plateau into mid-2023. 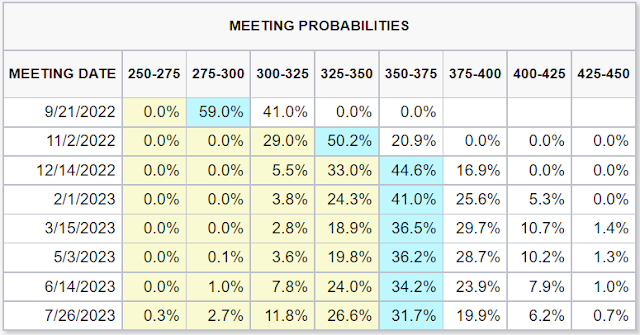 Is the market still misreading the Fed? How will Powell steer expectations?

The Fed has made it clear that its primary focus is getting inflation down to its 2% target. While it would like to avoid a recession, a recession may be necessary to achieve its task. Let’s see what challenges lie ahead.
Starting with inflation, the June core PCE stands at 4.8%. July PCE will be reported Friday and the market expects that it will decelerate to 4.7%. An analysis of the components of PCE is revealing.
The accompanying chart shows the evolution of the components of PCE, with the components shown on the left scale and core PCE on the right scale. Durable goods PCE (red line) peaked in April 2021 and it has decelerated considerably since as supply chain bottlenecks have eased to 2.7% in June. However, services PCE and non-durable goods PCE remain stubbornly high at over 9%.

The Fed’s June Summary of Economic Projections (SEP) shows that it expects core PCE to fall to 4.3% by December 2022. The decline will largely be attributable to the easing of transitory supply chain induced inflation. Getting core PCE down to the 4% zone will be easy. The path from 4% to 2% core PCE will be much harder.
The good news is inflation expectations are not running out of control, which will make the Fed’s job easier.

For a different perspective, The Transcript, which monitors earnings reports, offered a bottom-up view of inflation and its effects on the economy:

Inflation and rising interest rates have put a lot of pressure on the economy but overall consumers have remained remarkably resilient. Still, we are finding areas of concern building in many sectors. Consumer electronics and used cars are two areas where demand is ebbing. Middle-income consumers may be starting to trade down.

The Fed’s inflation fighting job is complicated by a hot labor market. As an indication of the tightness of the labor market, job switchers enjoyed a 6.7% median wage increase compared to 4.9% for stayers. 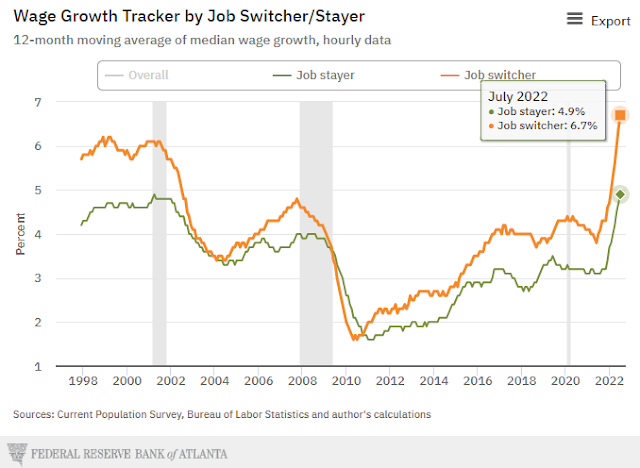 As well, the labor force participation rate (LFPR) hasn’t recovered to pre-pandemic levels, which is worrisome. An analysis of LFPR by education reveals that it’s the less educated and presumably lower paid workers who are missing from the workforce. 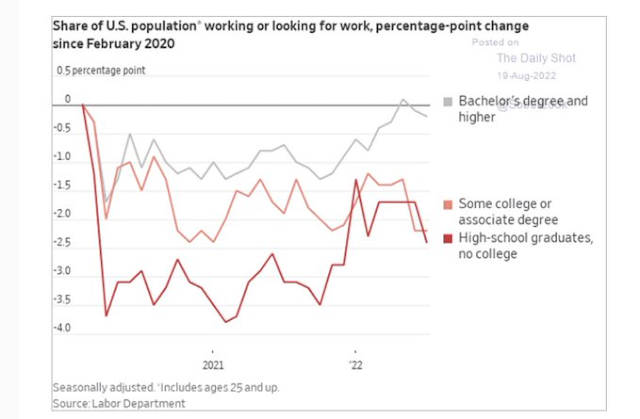 An Atlanta Fed study of the decomposition of the changes in the LFPR between Q4 2019 to Q4 2021 shows that most of the decline is attributable to behavioral factors. 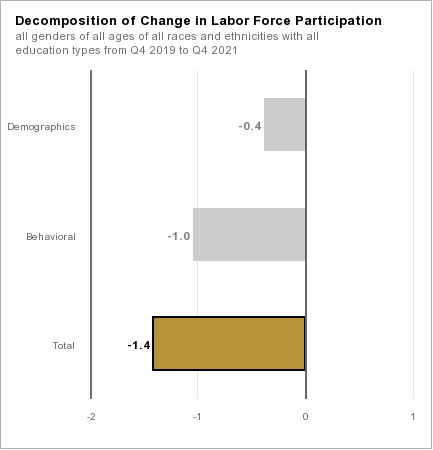 If the behavioral factors were to hypothetically all disappear tomorrow, prime age LFPR would be above pre-pandemic levels.

All of these factors combine to make the Fed’s job of fighting inflation harder. All else being equal, it needs to tighten further to raise the unemployment rate to head off the risk of a wage-price spiral.

A hawkish path ahead

So where does that leave us? Here’s what we know. The good news is inflation expectations are well-anchored. The bad news is the reduction in transitory inflation will bring the inflation rate down to about the 4% level, but the path from 4% to 2% will be far more difficult. As well, the labor market is hot and the risk of a wage-price spiral is rising.
I interpret these conditions as meaning the Fed will continue to pursue a hawkish policy. The title of the discussion at Jackson Hole is “Reassessing Constraints on the Economy and Policy”. Global central banks remain in tightening mode. Don’t expect the Fed to execute a dovish pivot in the near future. 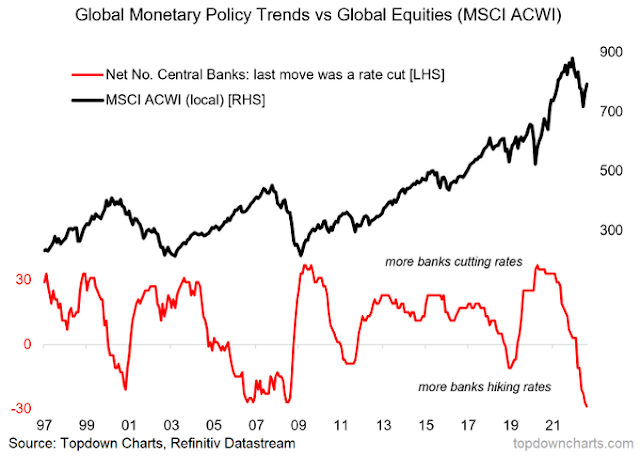 11 thoughts on “A Jackson Hole preview: Are expectations finally rational?”