The breadth thrust controversy – Humble Student of the Markets

Mid-week market update: The strength of the rally off the mid-March lows has been breathtaking. Ed Clissold of NDR Research pointed out that the market experienced several breadth thrust buy signals. The % of stocks above their 10 dma surged from under 10% to above 90% in a short time, which is historically bullish. He also observed that their version of the Zweig Breadth Thrust model using a common stock only universe also flashed a buy signal last Friday. 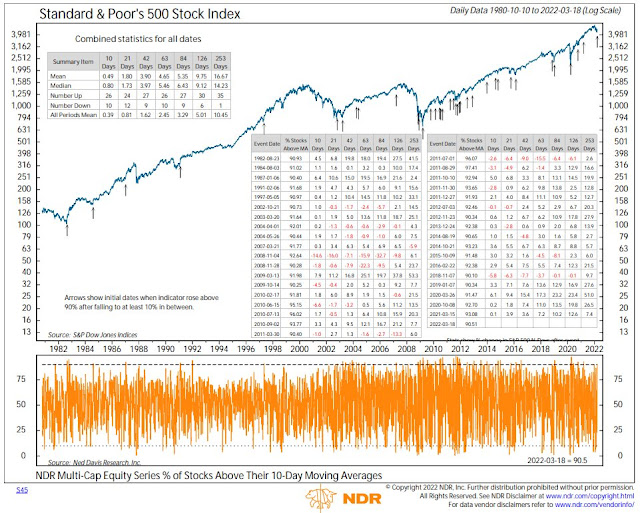 That’s where the controversy begins.

Much depends on what you call a “breadth thrust”. The term refers to a burst of positive price momentum over a short period, usually defined as a move from an oversold to overbought condition within 5-10 trading days.
An analysis of the % of S&P 500 above their 10 dma is not confirming the NDR buy signal. The market fell under 10% on this metric on February 24, 2022, and rose above 90% last week, which is not within a 10-day trading window. In all likelihood, NDR uses a different sample universe, such as NYSE issues, but this analysis casts some doubt on the breadth thrust conclusion. 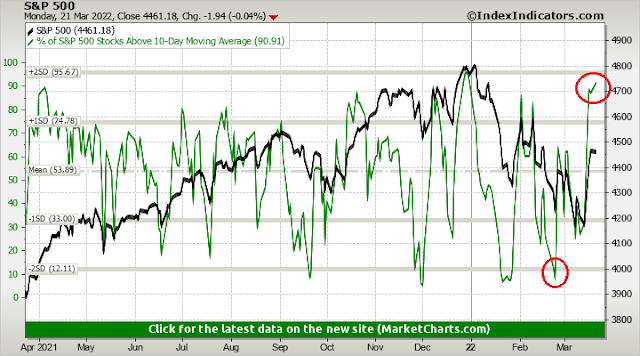 Similarly, the classic Zweig Breadth Thrust indicator using all NYSE-listed issues rose above its oversold condition on February 24, 2022, and it has not reached an overbought condition. 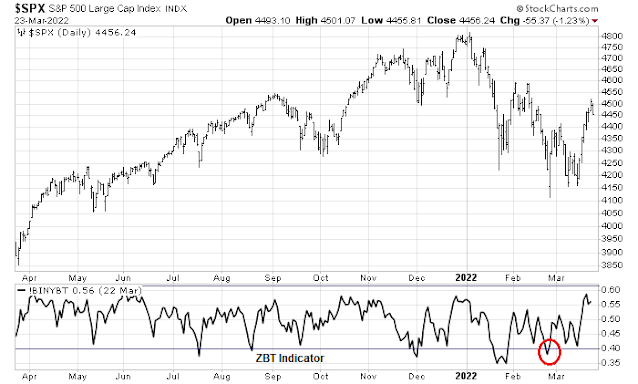 In light of these closely competing narratives, what should we make of these breadth thrust claims? Steve Deppe put it best when he threw up his hands when he analyzed historical analogs. One was wildly bullish, the other bearish. 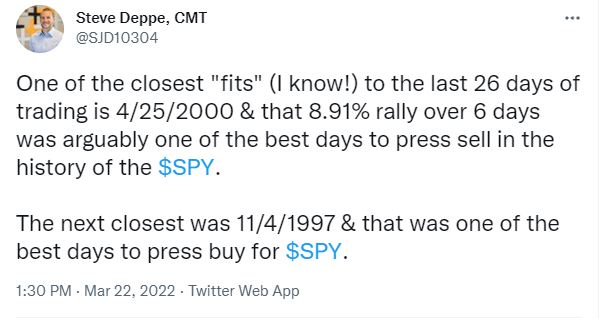 I prefer the Occam’s Razor approach of using the simplest explanation instead of more complex and convoluted analysis. The rally off the mid-March bottom was a short-covering rally driven mainly by the fast money crowd that was overly short the market. Sentiment was in a crowded short condition going into the FOMC meeting. Even though the Fed was hawkish as expected, it wasn’t enough. Buy the rumor, sell the news.
Even though sentiment surveys were at bearish extremes, the analysis of equity positioning showed that investors were cautious but readings were not at capitulation lows. 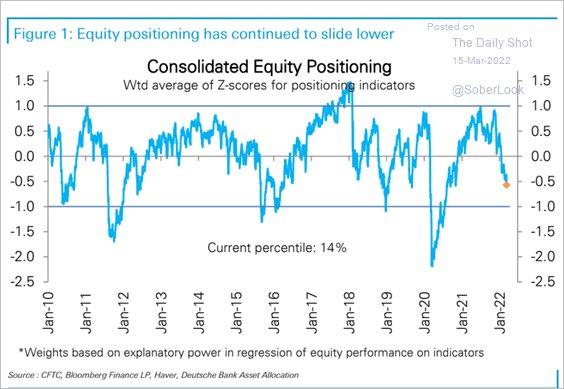 My base case scenario is the advance off the mid-March lows is a bear market rally, which tends to br short but vicious. 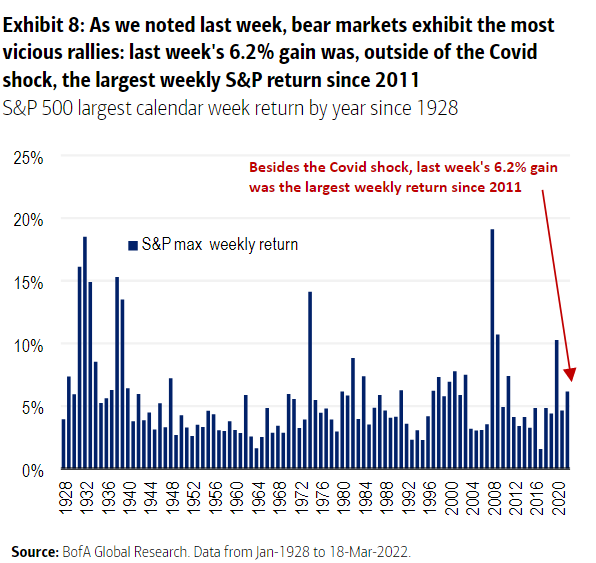 The rally appears to be stalling. Both the NYMO and NAMO have reached overbought conditions. There were seven instances when this happened in the last three years and five of them resolved with market stalls. The only exceptions occurred when the market surged off the March 2020 bottom. 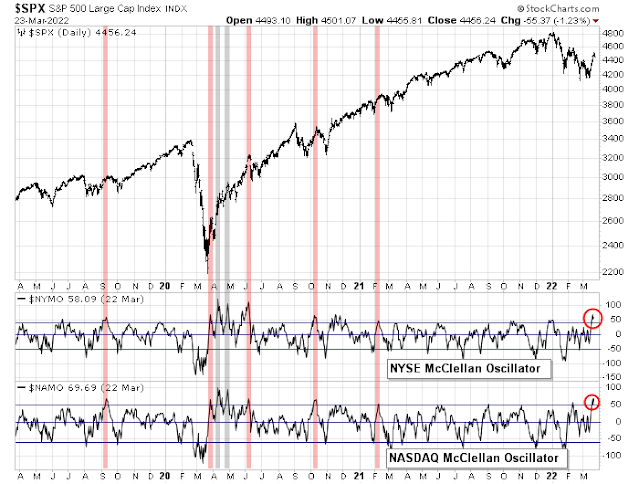 I had highlighted evidence of a bottom by the widespread incidence of bullish island reversals in washed-out pockets of the market. Here is ARK Innovation (ARKK), which exhibited an island reversal but the rally seems to have stalled. 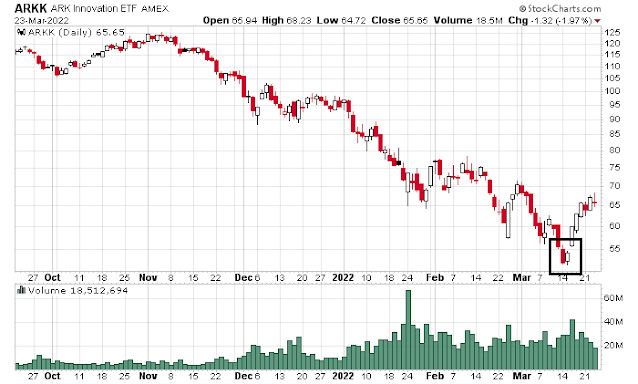 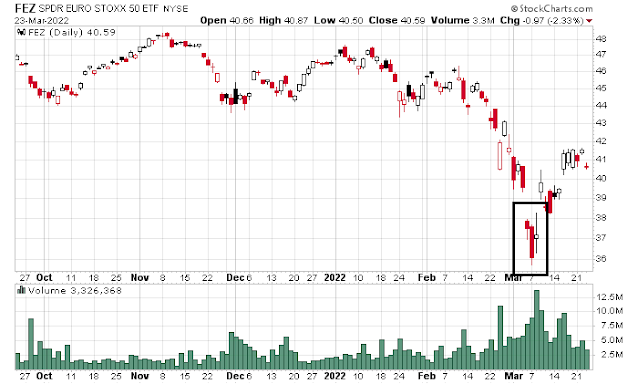 So is MSCI China. 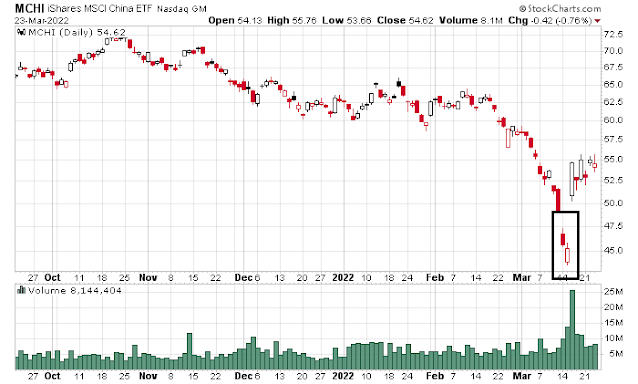 My crystal ball is a little cloudy and I am not sure about the direction of the next major market move. I do know that bullish momentum is fading. Subscribers received an alert yesterday that my inner trader had closed out his long position and stepped to the sidelines.
The balance of risks is tilting to the downside. Jerome Powell’s testimony on Monday was very hawkish and the market is now discounting half-point hikes at the next two FOMC meetings.

The Russian offensive has stalled and the Ukrainians have made some successful local counter-attacks. The risk of escalation remains high, which could spook the market.
My inner investor believes this is a time for prudence. My inner trader doesn’t have an edge and so he is stepping aside in wait for a better opportunity.

28 thoughts on “The breadth thrust controversy”