Rethinking the Hindenburg Omen – Humble Student of the Markets

The ominously named Hindenburg Omen was developed by Jim Miekka to spot major stock market tops. Unfortunately, it has also had a history of crying wolf too many times with false positives. Its inconsistency prompted one commentary to call it a warning to avoid traveling by blimp.

David Keller recently penned an article that analyzed the Hindenburg Omen in detail. He called it a breadth indicator with three specific components:
Keller further explained, “A valid Hindenburg Omen signal needs to have multiple signals within a 30-day window to actually register a valid bearish indication.”
A chart of the Hindenburg Omen is shown below. The indicator is displayed in the lower panel and a valid signal has a value of 3. History shows that there were 11 such warnings in the last 10 years. Six saw declines (shown in pink). The market continued to advance or the Omen was too late in warning of declines in four instances (grey). One resolved in a sideways choppy market (grey/pink). While these results are marginally useful, this indicator’s sell signals don’t inspire a high level of confidence. The Hindenburg Omen has recently flashed a series of sell signals. How should investors react?

I conducted a more detailed analysis of the history of this indicator going back to the 1990’s and found that it spotted most major market declines ahead of time, such as the dot-com top in 1999 and 2000 and the market top in 2007 and subsequent Great Financial Crisis in 2008. The only one it missed was the Long-Term Capital Management Russia Crisis meltdown. 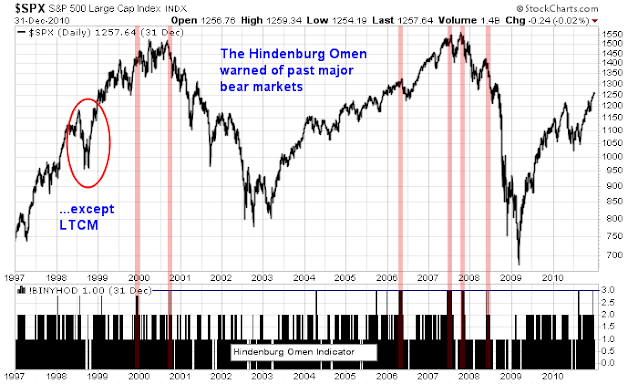 I conclude that this is an indicator with a spotty success record with a strong left return tail. Despite the record of false positives, it has warned of almost every major past bearish episode. I call this a condition indicator that is a signal of potential large downside risk but needs confirmation from other indicators for investors to turn cautious.
As a reminder, I recently pointed out that the Wilshire 5000 and its negative monthly RSI divergence flashed a sell signal. While the Wilshire 5000 sell signal can take anywhere from two months to over a year to resolve bearishly, the combination of these bearish warnings should raise the level of cautiousness for investors. 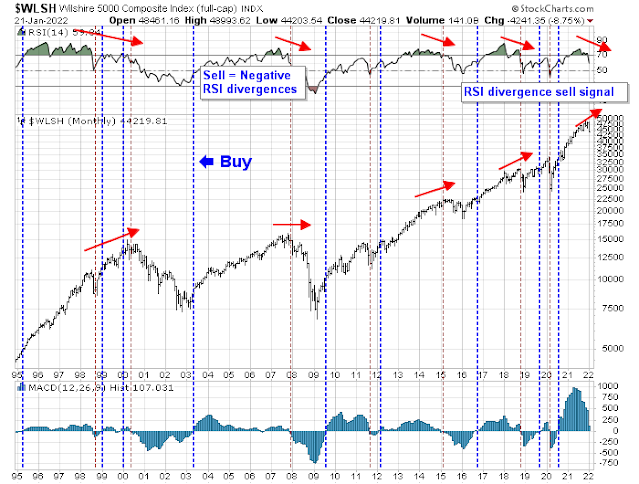 In addition, my Trend Asset Allocation Model has been downgraded from bullish to neutral. As a reminder, the Trend Model is based on a composite of global stock and commodity markets. It has a history of out-of-sample signals since 2013. A model portfolio that varies 20% in weight from a 60/40 benchmark has shown a record of equity-like returns with balanced fund-like risk. 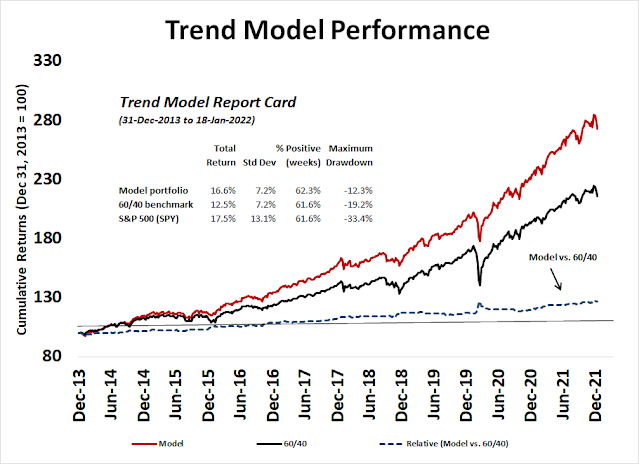 Investors should interpret the downgrade as a signal to de-risk from an aggressive to a neutral position. It is not the Apocalypse.
Let’s take a look. In the US, the S&P 500 has violated its 50-day moving average (dma) and testing its 200 dma. Both the S&P 500 and NASDAQ 100 have begun to lag global stocks, as measured by the MSCI All-Country World Index (ACWI). 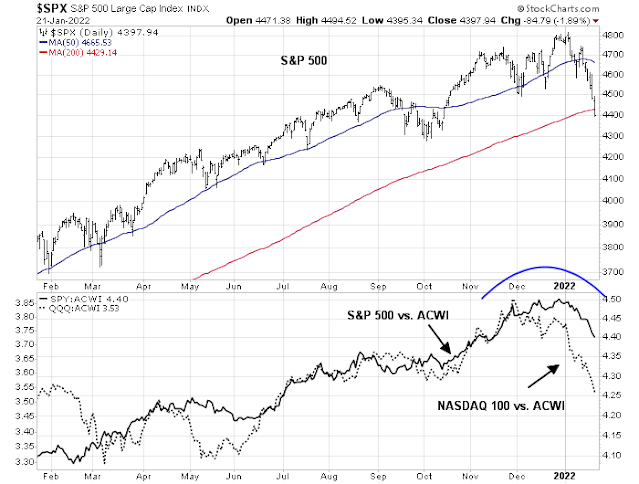 In Europe, the Euro STOXX 50 is struggling to hold its 50 dma. The FTSE 100 has held up well, mainly because of its heavier weighting in energy and financial stocks, which have outperformed. The mid-cap FTSE 250, which is more reflective of the British economy, has violated both the 50 and 200 dma. 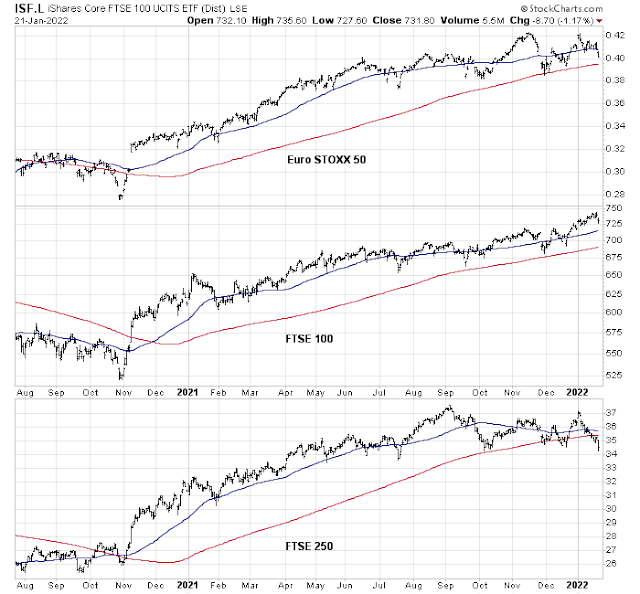 Asian markets, on the other hand, are showing signs of stabilization after a period of poor performance. Both China and Hong Kong have begun to turn up relative to ACWI. The PBoC has begun to ease, though it’s still an open question whether the change in policy will stimulate the Chinese economy or just stabilize the growth downturn from the property developer implosion. Monetary policy will not be able to address the growth challenges posed by China’s zero COVID policy of locking down areas whenever an infection is found. Other Asian markets are also exhibiting constructive signs of forming relative bottoms. Commodity prices present a mixed picture. On one hand, they are strong and broke out to new recovery highs. On the other hand, the cyclically sensitive copper/gold ratio has been trading sideways for about a year, indicating neither strong economic strength nor weakness. 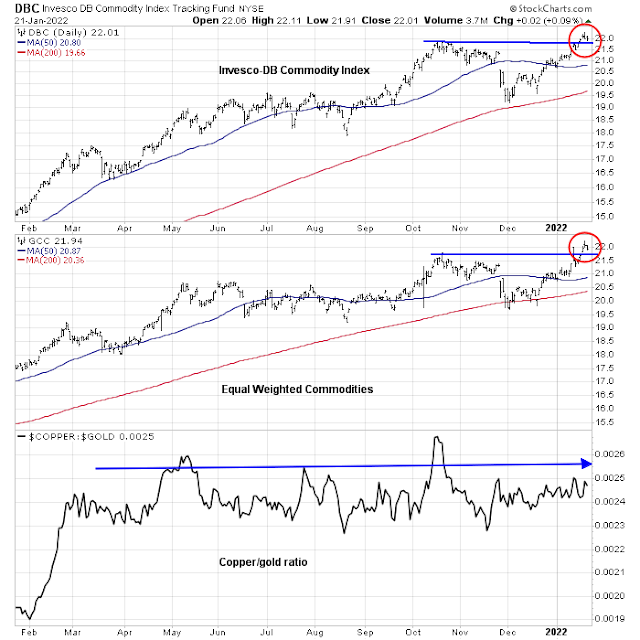 These readings support the Trend Asset Allocation Model’s shift to de-risk, but markets are not a complete disaster.

Two recent institutional investor surveys are highlighting a case of cognitive dissonance, the need for caution and the potential of a rush for the exits should risks materialize. The BoA Global Fund Manager Survey found that respondents were piling into value and cyclical sectors. 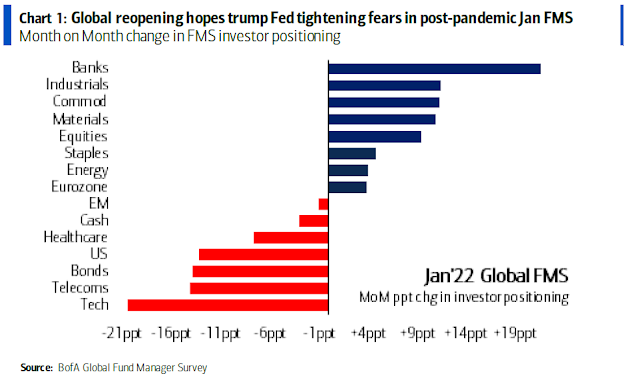 The IHS Markit Survey of Managers found a similar preference for cyclical exposure. 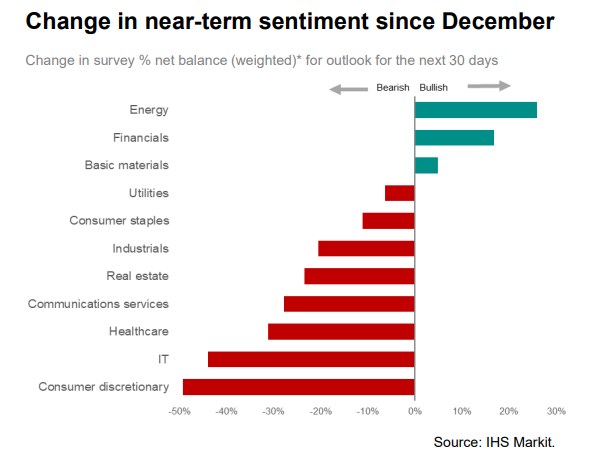 Here is where the cognitive dissonance comes in. The BoA Fund Manager Survey shows that the biggest tail-risk is a hawkish central bank. Why on earth would you stampede into cyclical stocks if you are worried about the Fed raising rates?

I pointed out before that equity investors face an elevated level of risk with value and cyclical stocks in the current environment (see Fade the value rebound). The market should gain greater clarity on this question after the January FOMC meeting next week. Notwithstanding the geopolitical risk of a Russia-Ukraine conflict, the FOMC meeting could represent an inflection point in risk appetite.
In conclusion, I am seeing signs of technical deterioration from a variety of sources, such as the Hindenburg Omen, a long-term Wilshire 5000 sell signal, and a Trend Asset Allocation Model downgrade. At a minimum, investment-oriented accounts should de-risk their portfolios and shift to a neutral equity weighting position consistent with their benchmark targets.

21 thoughts on “Rethinking the Hindenburg Omen”