What rhymes with 2011? – Humble Student of the Markets 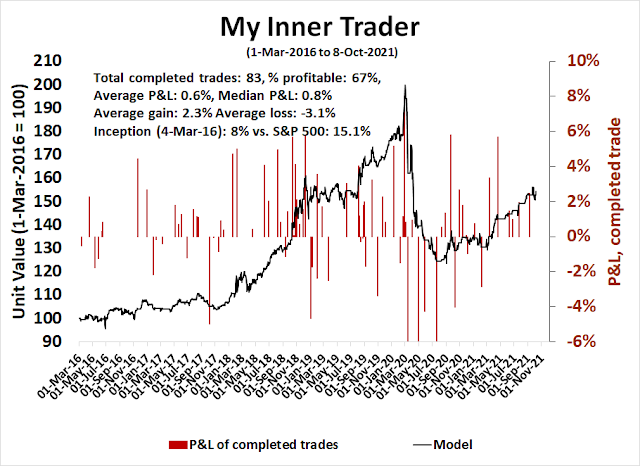 The market action today is somewhat reminiscent of 2011. Then, the macro backdrop was characterized by a debt ceiling impasse in Washington and a Greek Crisis in Europe that threatened the very existence of the eurozone. I can remember endless European summits and plans to make plans for Greece. The news flow worsened and it seemed like no one was in charge in Europe, but the S&P 500 tested support multiple times while exhibiting a series of positive RSI divergences. The logjam was finally broken when the ECB stepped in and announced its LTRO program. Stocks bottomed and never looked back. History doesn’t repeat itself, but rhymes. Today, the market has been beset by a debt ceiling impasse in Washington and concerns over inflationary pressures which may or may not be transitory from supply chain bottlenecks. The logjam appears to have been temporarily broken when the Democrats and Republicans agreed to kick the can down the road and revisit the debt ceiling question in December. Stock prices duly staged a relief rally. 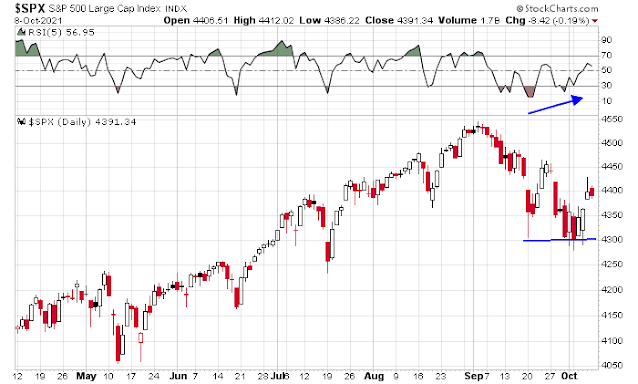 Sentiment models have been signaling a market bottom. The latest readings from Investors Intelligence showed that bullish sentiment has tanked, which is an indication of capitulation. The S&P 500 has only weakened by only -5% and this level of panic is unusual for such a shallow pullback. 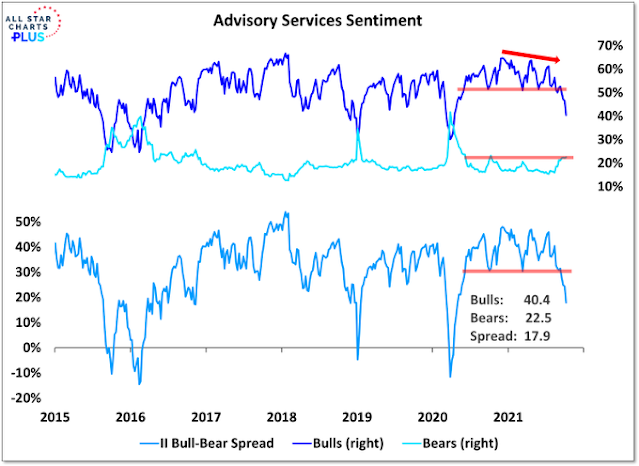 Even as the market began to rally, the CBOE put/call ratio remained elevated and above 1, which is an indication of fear. I interpret this to mean that the market is climbing the proverbial Wall of Worry. 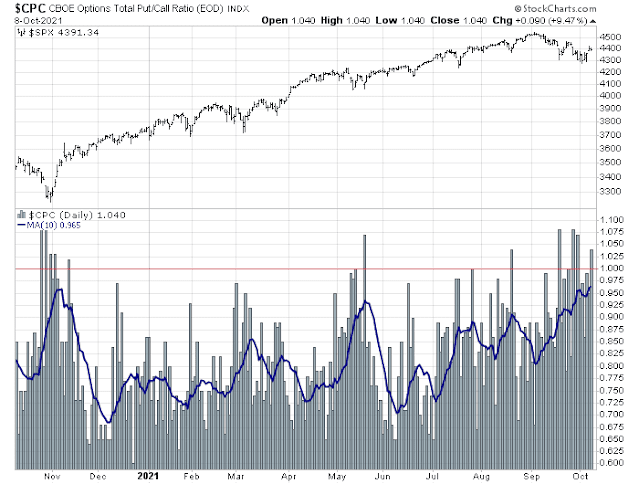 In addition, inflation fears may be at a zenith. The latest global PMI report shows that delivery delays may have peaked, indicating an easing of supply chain bottlenecks. 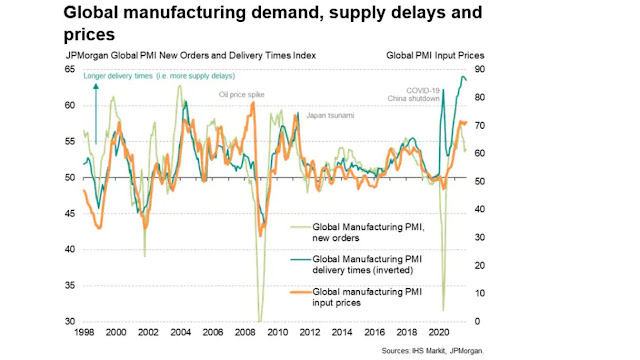 This is confirmed by reports that the semiconductor shortage problem is peaking. 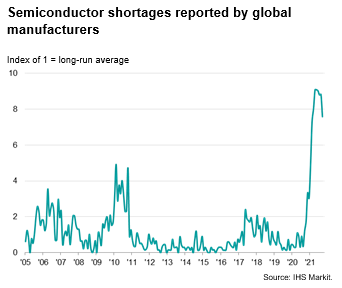 The IMF forecasts headline inflation in advanced economies will peak soon and fall to an average of 2%. As the Fed prepares to begin tapering its QE purchases, tamer inflation readings should alleviate the pressure to tighten. In addition, the resignation of Rosengren of the Boston Fed and Kaplan of the Dallas Fed will lower the number of hawks at the FOMC table. 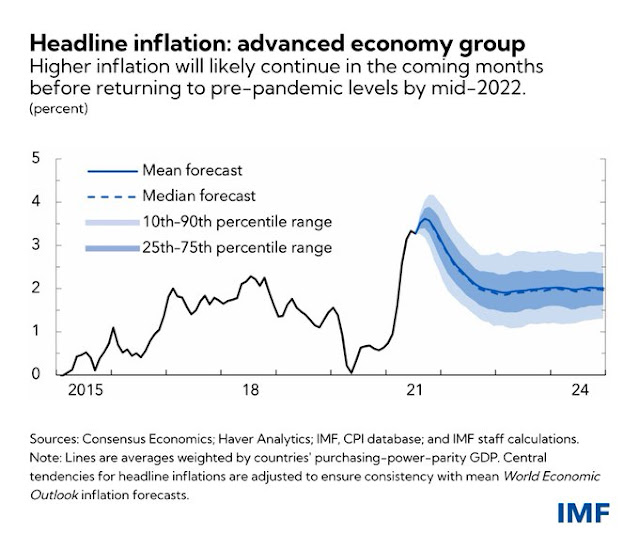 Nevertheless, I believe the Fed taper is on track at the next FOMC meeting despite the wide headline miss in the September Jobs Report. As a reminder, here is how Powell set the bar for a taper at last FOMC press conference:

Even though the September NFP missed at 194K compared to expectations of 500K, most of the miss was attributable to government job losses, specifically in education owing to unusual seasonal adjustments. August NFP was revised upward. Private employment, as measured by ADP, was strong. So were average hourly earnings and average weekly hours. Ex-government employment and the unusual education seasonal adjustments, the September figure qualifies as a “decent employment report” by Powell’s standards. The Fed will regard the headline report as an anomaly and stay the course on its taper plans.

As well, the equity risk premium (ERP) estimate from NYU Stern School professor of finance Aswath Damodaran rose to 4.93% at the end of September. 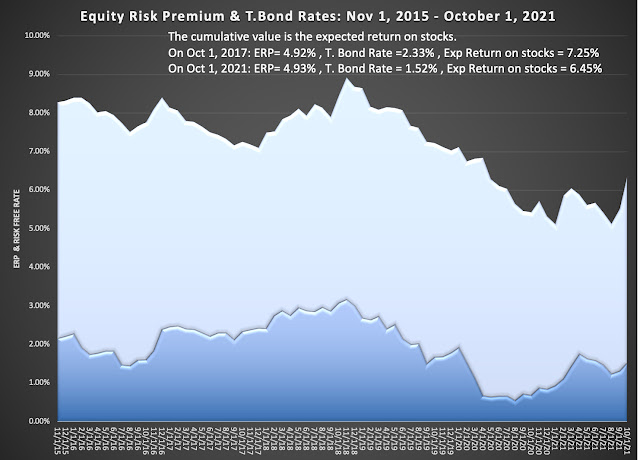 This ERP reading is roughly equal to the level on October 1, 2017.

A rocket on the launch pad

I interpret these conditions as a rocket on the launch pad. While the engineers may have ignited the engines, takeoff hasn’t been confirmed but the meltup scenario remains in play (see A Q4 meltup ahead?).
Here is what I would like to see to sound the all-clear signal. First, the S&P 500 needs to convincingly reclaim the 50 dma level of 4438. The small-cap Russell 2000 and S&P 600 need to stage upside breakout from their trading ranges. The upside breakouts should preferably be accompanied by small-cap outperformance. 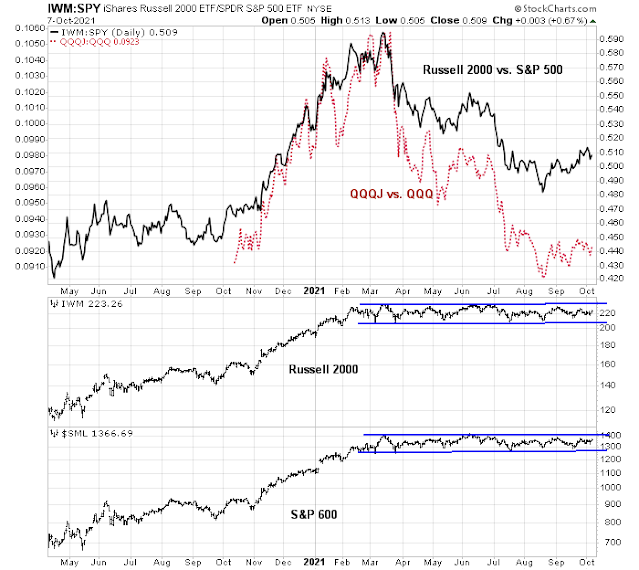 Finally, I would like to see the growth cyclical semiconductor industry to stage an upside breakout relative to the S&P 500 (bottom panel), which would be a signal of a revival in reflationary market expectations. 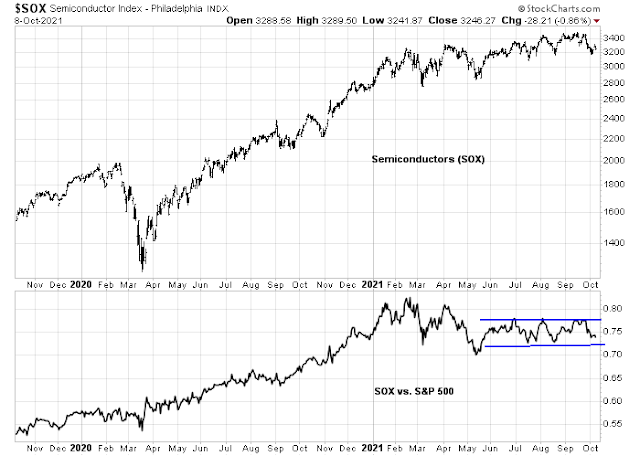 Options expire in the coming week. Historically, October OpEx has been one of the most bullish OpEx weeks of the year. 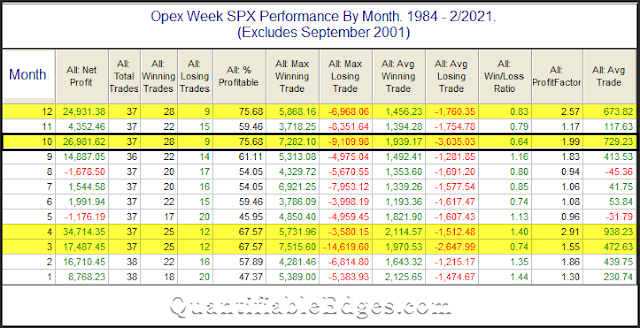 In the very short term, the S&P 500 is recycling off an overbought extreme and it could weaken early in the week. Traders should regard any pullback as a buying opportunity. 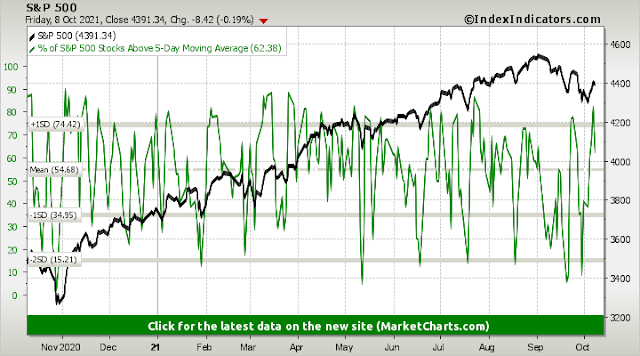 In conclusion, the US equity market appears poised for a strong rally into year-end. While last week’s relief rally in the wake of a temporary debt ceiling deal is constructive, I am waiting for further confirmation of technical strength before calling an all-clear signal.
Disclosure: Long SPXL