What China decoupling looks like – Humble Student of the Markets

Skip to content
When Trump began his trade war with China, the Street’s narrative was “decoupling”. It took a few years, but it’s finally happened. As China’s economic outlook and market deteriorated, it did not drag down the economies of Europe and North America.
To be sure, the news out of China is grim. A series of “common prosperity” crackdowns, financial restructuring, and a slowing economy have combined to tank Asia’s stock markets. The relative performance of the markets of China and her major Asian trading partners against the MSCI All-Country World Index (ACWI) has been weak. With the exception of Taiwan, all have broken key relative support levels indicating relative underperformance against global equities. 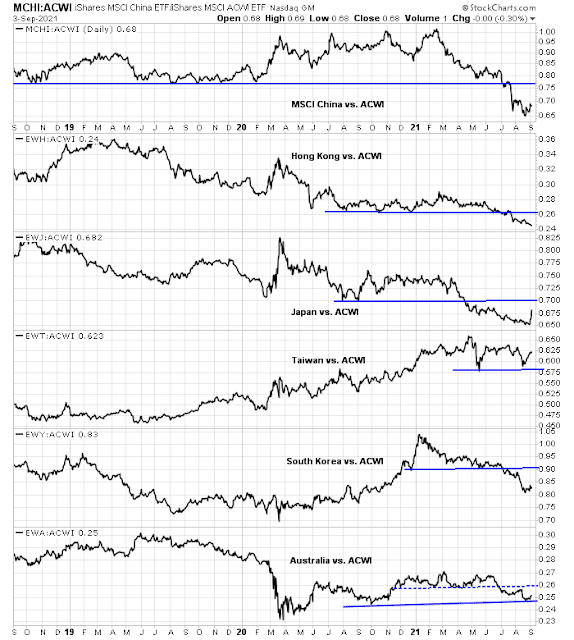 The good news is other developed markets have held their ground. That’s what decoupling looks like.

The East is Red

During the Cultural Revolution, the song 东方红 (The East is Red) became the de facto Chinese national anthem in the same way that L’Internationale was the anthem of communist and Marxist revolutionaries. Fast forward to 2021, the East is Red once again, but not in a good way. The combination of “common prosperity” policy changes, financial restructuring of past excesses, and a slowing economy has colored asset returns red.
China has undergone a series of dramatic policy changes under the “common prosperity” slogan. It is far beyond the scope of this research article to analyze all the details of Xi’s “common prosperity” campaign, but Bloomberg recently outlined the scope and philosophy behind the initiative by using the province of Zhejiang as a laboratory.

To understand what President Xi Jinping envisions in his calls for “common prosperity,” look to the pilot program underway in the wealthy province of Zhejiang, home to 65 million people and some of China’s most successful private companies.
Xi’s mounting campaign to spread the wealth has sent shock waves through the economy, triggering market sell-offs and speculation that China will reverse the reforms that lifted incomes nationally — and created a class of powerful billionaires.

Zhejiang is an ideal test case because it is the home of Alibaba and one of the most prosperous provinces in China.

The central coastal area is home to Alibaba Group Holding Ltd. and Zhejiang Geely Holding Group Co., among others. Four of the 10 richest people in China have based their businesses in the capital city of Hangzhou. The private sector accounts for 66% of provincial gross domestic product, compared with around 60% nationally.

The objective of the plan is to address income inequality, but not through a Europe-style redistribution, but growth.

The Zhejiang plan suggests Beijing wants to raise incomes through private sector investment in poorer areas, and to encourage rural residents to start their own businesses. Radical wealth redistribution, or a European-style welfare state funded by strong taxes, isn’t in the cards.

Bloomberg outlined the goals of the plan. 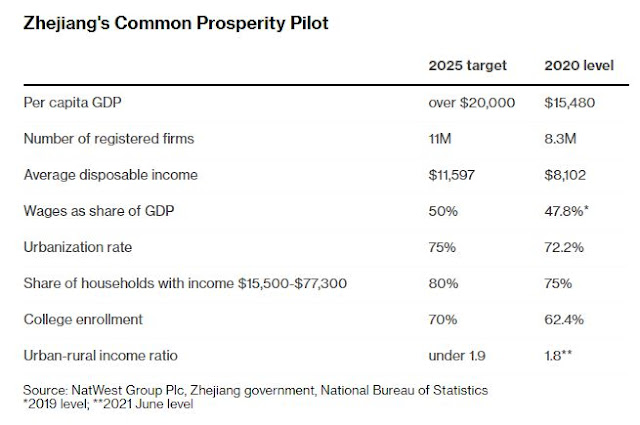 The “common prosperity” measures have targeted a series of industries that have shocked the markets, such as for-profit education, technology through data privacy edicts, and gaming by restricting the ability of teenagers to play online games. The list goes on and investors are uncertain as to what will happen next.
In addition, the Huarong Affair made market participants reassess what constitutes a “too big to fail” enterprise. For the uninitiated, China Huarong Asset Management Co. was one of China’s “bad banks” designed to clean up the banking losses from the Asian Crisis. Instead, Huarong reported a $15.9 billion loss through mismanagement of assets by its chairman, Lai Xiaomin, who was convicted of corruption and executed in January. After months of bureaucratic infighting, CITIC announced that it would rescue Huarong with an equity injection. 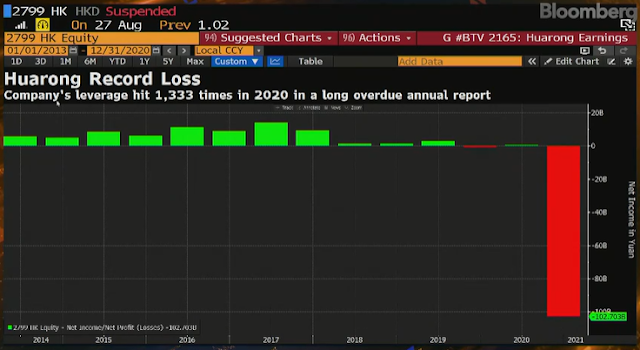 The Huarong bailout sparked uncomfortable questions about what constituted a safe credit in light of the company being a SOE created by the Ministry of Finance. The elephant in the room is China Evergrande, a private company controlled by billionaire Hui Ka Yan. Evergrande is a highly levered property developer with $300 billion in liabilities to banks, suppliers and homebuyers in an industry is in the crosshairs of the “common prosperity” initiative to control real estate prices. Evergrande is now forced to fire-sale its assets, possibly at large discounts, in order to lighten its debt load. The combination of the Huarong and Evergrande troubles had the potential to spark a Chinese Lehman Crisis. 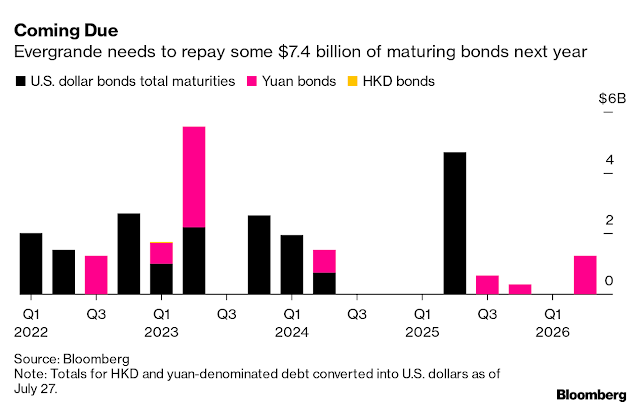 In addition, the economy is slowing. The latest release shows that both Manufacturing and Services PMIs have fallen below 50, which indicates contraction. 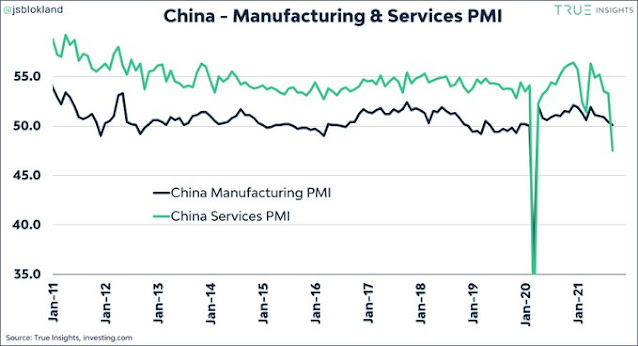 Slowing Chinese growth has dragged down most of her Asian trading partners. It also doesn’t help that most of Asia suffer from low vaccination rates, which has been a drag on PMI readings. 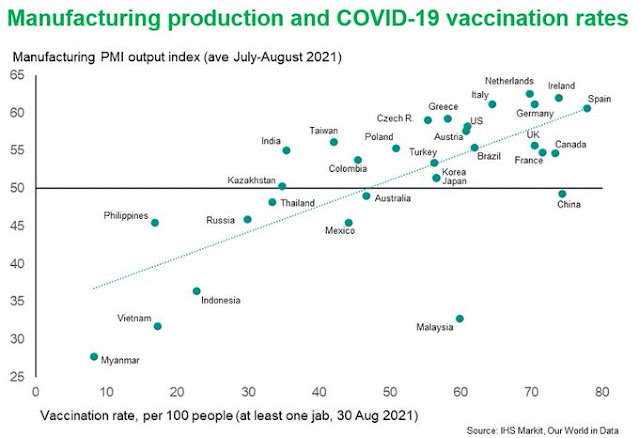 In a globalized economy, one would think that a teetering China would throw a scare into global financial markets and become a drag on the economic growth of other trade blocs. That doesn’t seem to be the case.
Consider Europe. The demand for workers has recovered to pre-pandemic levels for most eurozone countries. 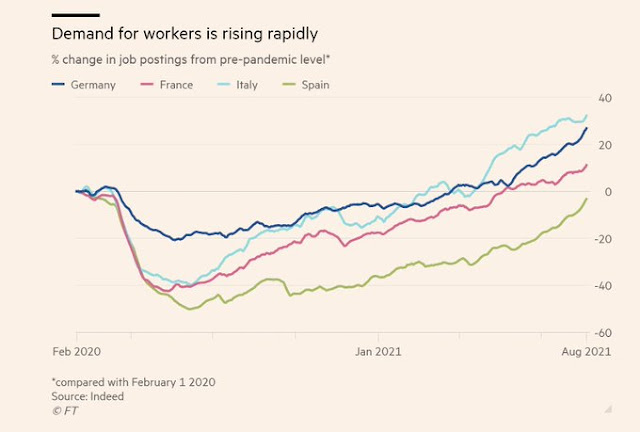 Bloomberg reported that the European banking system is awash with liquidity in a highly unusual way.

The Targeted Longer Term Refinancing Operations currently provide more than 2.2 trillion euros of cash to the region’s banks. Demand at the regular Longer Term Liquidity Operations, which provide money for three months has completely evaporated, with the July 1 scheme only attracting 3 million euros from one bidder.
Even more unusually, banks are so flush with liquidity, they are now giving the ECB cash as collateral for the loans they receive. Yes, you read that correctly. Banks have borrowed money from the ECB — and given the ECB the money back as collateral for the loan.
We can see this in data provided by the weekly financial statement, which has a line item called “deposits related to margin calls.” In any other time, an increase in this line item would be a sign of severe stress, as it would mean the collateral banks had posted with the ECB to secure their lending had fallen so much in value, the ECB has made a margin call — think Greek sovereign bonds circa 2011. 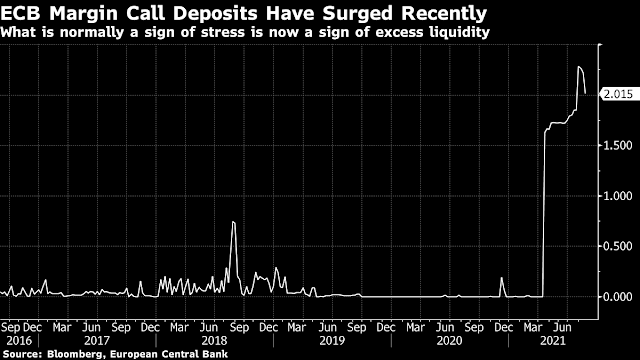 In many ways, the COVID Crisis is over in Europe.

Across the Atlantic, the economy is showing signs that it is shifting gears from recovery to mid-cycle expansion. Indeed reported that job posting growth is shifting from low-wage reopening jobs to higher-paid manufacturing and software development positions. 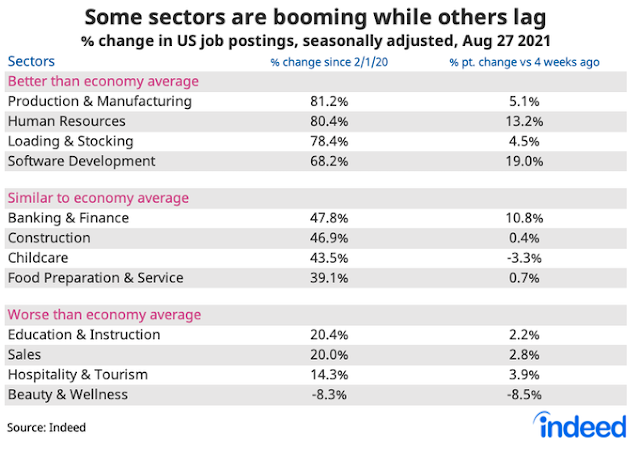 Indeed’s readings are consistent with the disappointing August Jobs Report, which showed continued job gains in manufacturing and softness in retail and leisure and hospitality. Another silver lining in the Jobs Report was an increase in the prime age employment to population ratio, which is another sign of labor market healing.

The latest Chase card spending data shows that recent softness is concentrated in travel-related services, but the other components are holding up well. Travel should recover once the effects of the Delta variant begin to dissipate. Already, new case counts are topping out. Don’t bet against the American consumer. 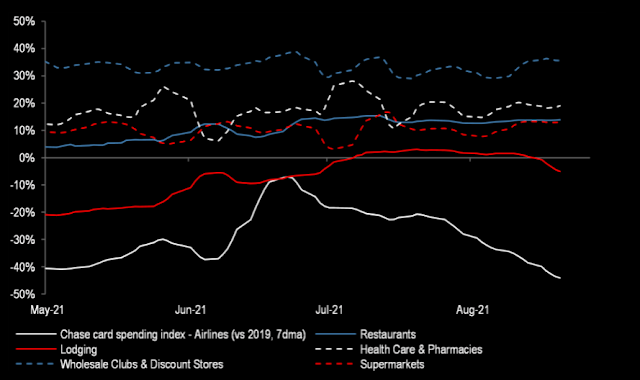 The latest ISM print shows that manufacturing is strong. 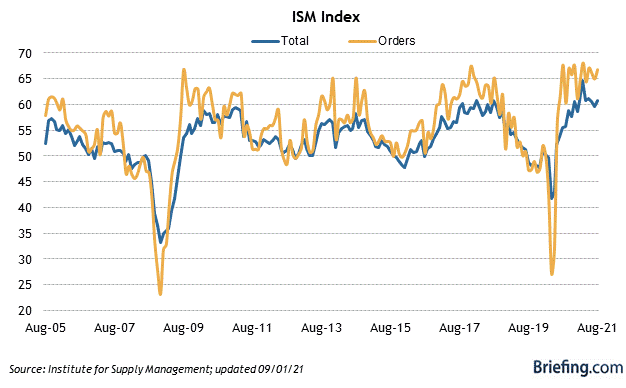 From a global perspective, global demand and manufacturing are strong, but supply chain bottlenecks are creating delivery problems that will temporarily spark inflation pressures. 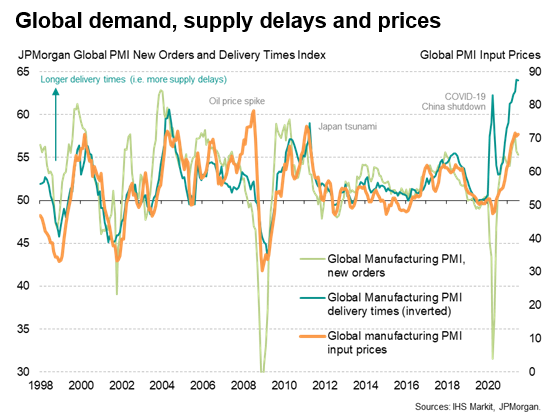 Putting all together, market-based signals paint a picture of China decoupling and global recovery. Willie Delwiche pointed out that three-quarters of ACWI markets have recovered to above their 50-day moving averages despite China’s obvious difficulties. 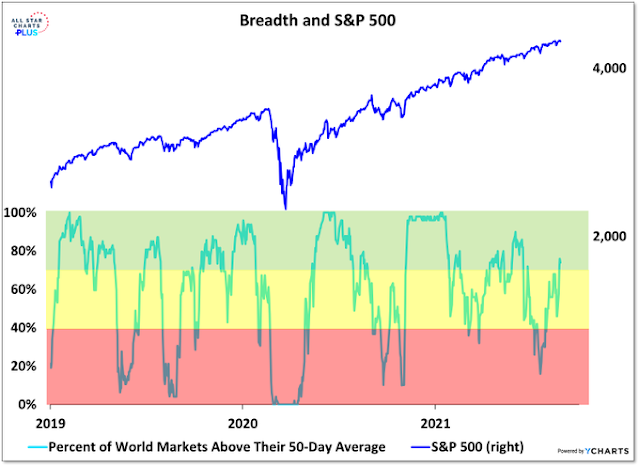 The MSCI Emerging Markets Index is suffering because of the one-third weight of China. However, the EM xChina Index is recovering in performance relative to ACWI even though the top two weights in the index are in PacRim Asia. 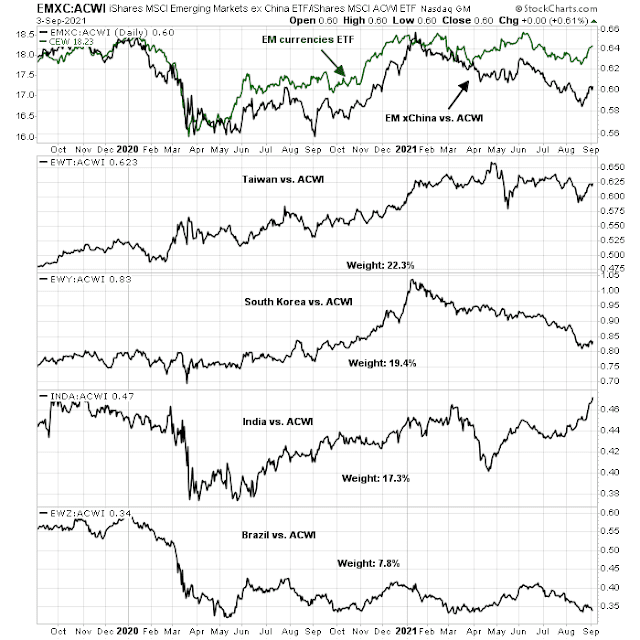 Commodity prices have held up. As well, the cyclically sensitive base metals/gold ratio has been trading sideways. In light of China’s voracious appetite for most commodities, this is another indication that the rest of the world is shrugging off China’s slowing growth. 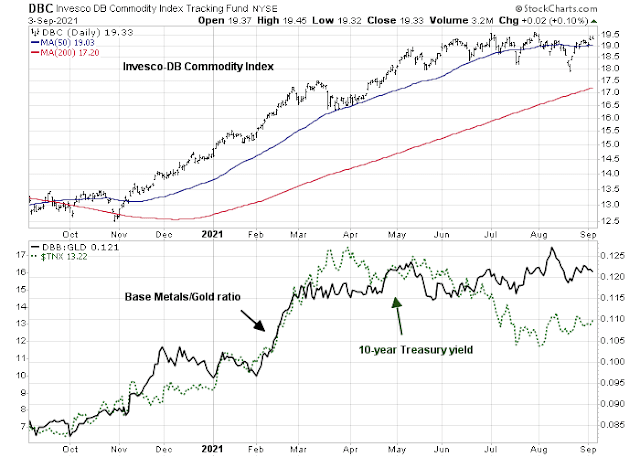