A rate hike roadmap – Humble Student of the Markets

Now that a QE taper announcement is more or less baked-in for this year, the next question is when the Fed will raise rates. The July FOMC minutes highlighted the point that the criteria for a taper decision is entirely different from that for a rate hike.

While the rate hike decision process can be analyzed in terms of the Fed’s Flexible Average Inflation Targeting (FAIT) framework, it also depends on the Powell Fed’s newfound focus on inequality and employment. How does the Fed define full employment? In particular, a comparison of the US prime-age employment to population (EPOP) to Canada’s is a laboratory in monetary and government policies in light of the similarities in age (though not race) demographics. Canadian prime-age EPOP has been higher than the US in the last two expansion cycles and it recovered faster from the pandemic when compared to each country’s respective 2019 peaks.

All of these questions are important considerations for the analysis of Federal Reserve monetary policy.

As I have pointed out before (see How to engineer inflation), there has been a significant shift in Fed policy in recent years. The Reagan Revolution of 1980 ushered in an era of laissez-faire economics. As a result, productivity gains have accrued to the suppliers of capital at the expense of the suppliers of labor. As productivity grew, real wage growth remained stagnant. 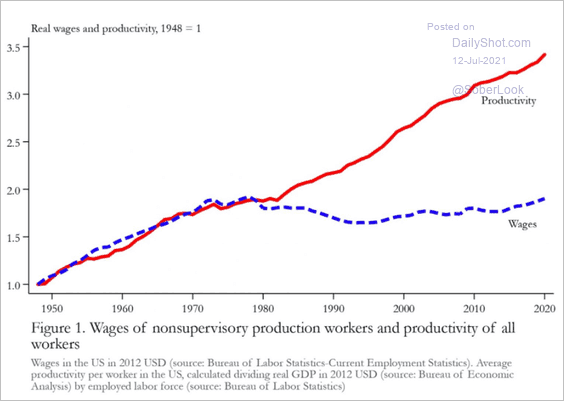 The suppression of wage growth was a key component of monetary policy. The Phillips Curve, which postulates a tradeoff between inflation and unemployment, was an important determinant of monetary policy. Fed policymakers targeted the unemployment rate and tightened whenever the economy boomed and unemployment neared an estimated “non-accelerating inflation rate of unemployment” (NAIRU) in order to head off rising inflation and inflationary expectations. As a consequence, Fed policy exacerbated income and wealth inequality by favoring the suppliers of capital over the suppliers of labor. 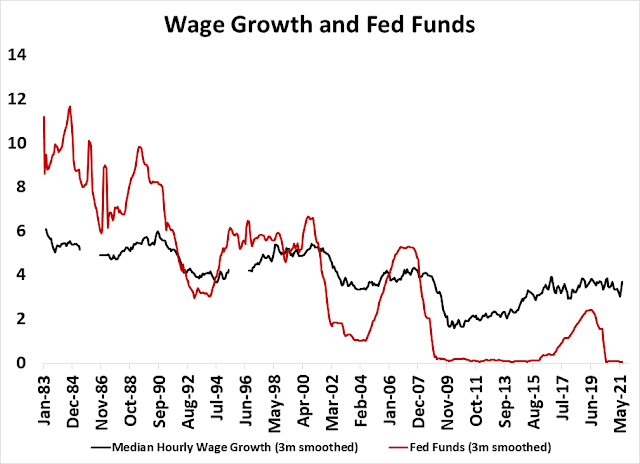 The recovery out of the GFC recession was an important lesson for the Fed. The Phillips Curve flattened. As unemployment approached a NAIRU estimate, inflation remained tame. There was more slack in the labor market than thought. Inflation was nonexistent. In addition, policymakers learned through a series of “Fed Listens” community outreach meetings of the problems of rising inequality.
The solution was the Flexible Average Inflation Targeting (FAIT) framework. The Fed was willing to tolerate some overshoot of its 2% inflation target to run a hot economy in order to reach full employment. The question for investors is, “What is full employment?”
A Bloomberg podcast with Neel Kaskari, the President of the Minneapolis Fed, was revealing. While Kaskari is one of the more dovish members of the FOMC, his comments nevertheless provided an important window of thinking around the definition of full employment.
Kashkari stated that he believes that there are still 6-8 million workers who are not in the labor force absent the COVID-19 shock. 6-8 million jobs need to return before he can declare the economy has returned to full employment. He is focusing on the labor force participation rate (LFPR) and its sister indicator EPOP as metrics of full employment.

What about the widespread report of tight labor markets? While there have been many anecdotal explanations for labor shortages, the Atlanta Fed has a useful analytical tool for measuring changes to the labor force. For the two years ending Q3 2021, the decline in LFPR is mainly attributable to retirement, with a decline in the shadow labor force coming in second. 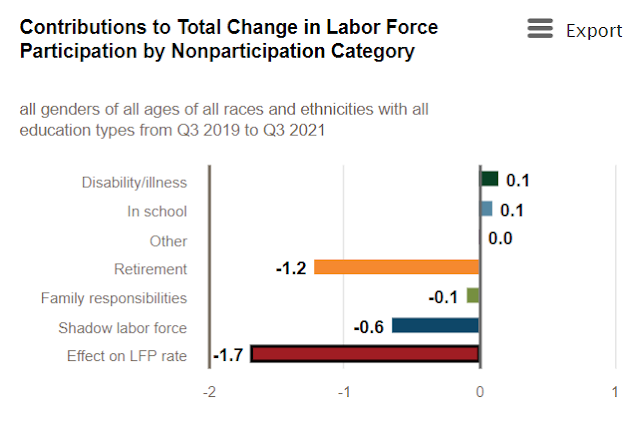 As the Fed is also focused on inequality, the analysis of changes in LFPR by race is equally revealing. The decline in white LFPR is almost entirely explained by retirement. 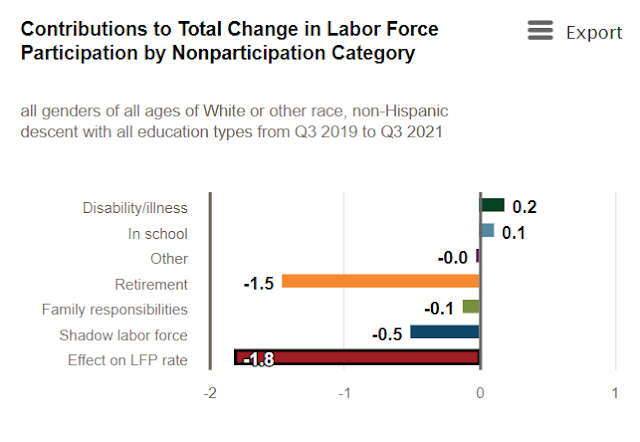 By contrast, retirement plays smaller roles in the decline in Black and Hispanic LFPR. 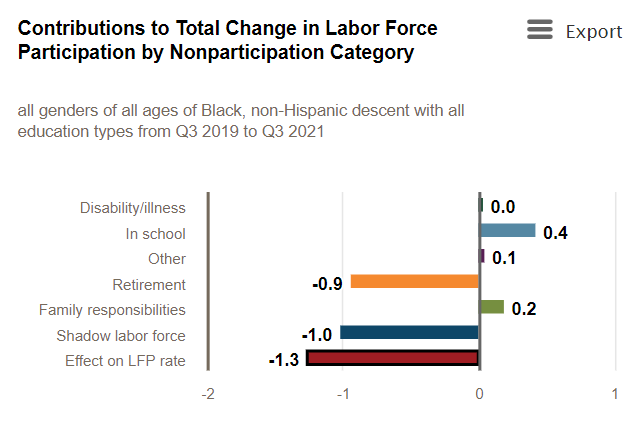 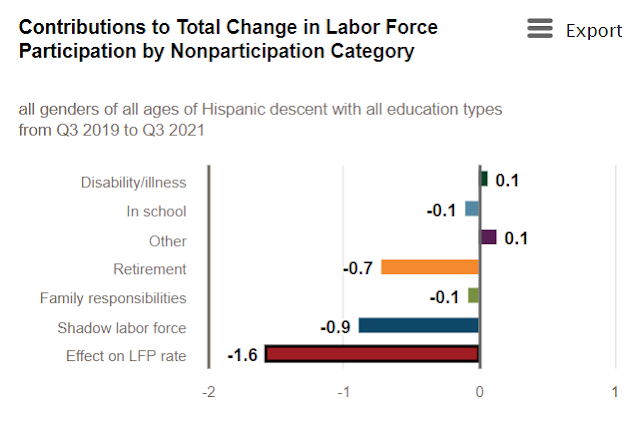 These results are not surprising owing to the difference in age demographics of different racial groups. White Americans have a much older age profile compared to Asian, Black, and Hispanic Americans. 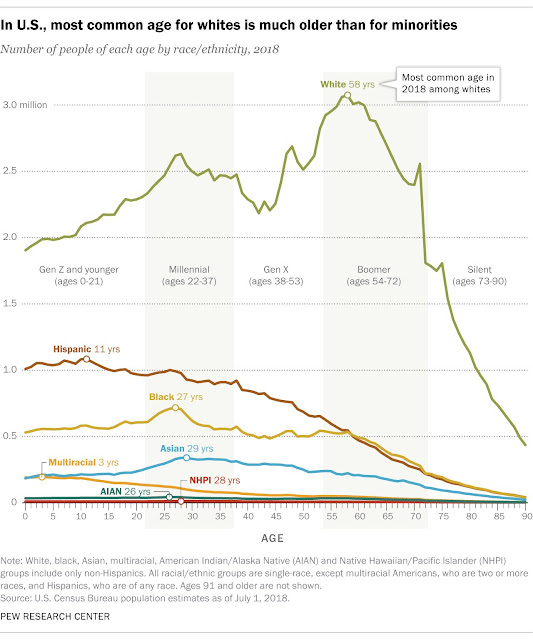 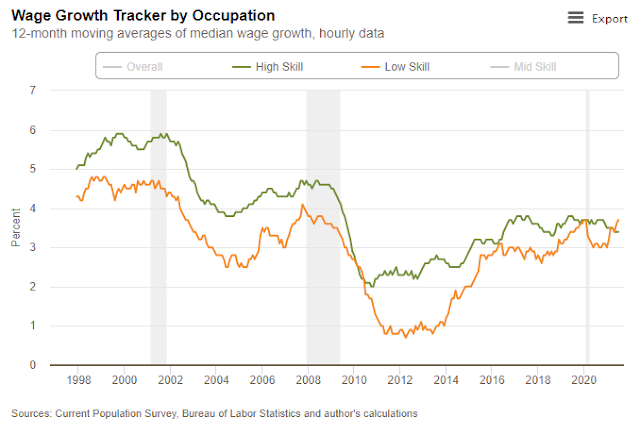 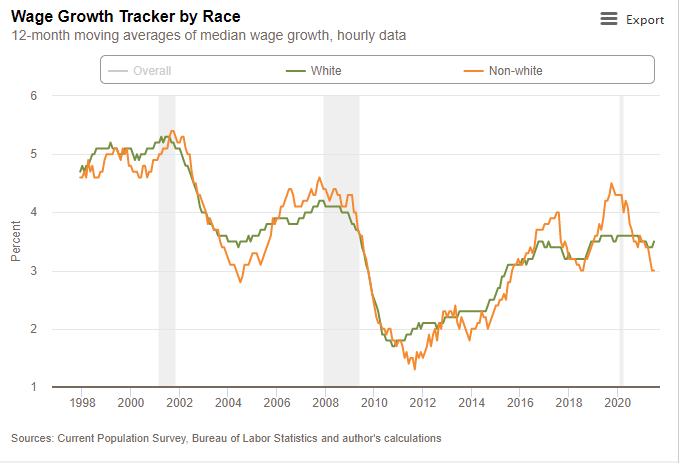 Based on all these metrics, the labor market has a long way before it has healed. The economy is far from full employment.

Even though Neel Kashkari is viewed as a dove who is focused on labor market dynamics and full employment, he allowed that Fed officials cannot ignore their inflation mandate in determining monetary policy.
While inflation indicators have recently spiked, Kashkari is monitoring metrics like wage growth and the sources of inflation by sector. So far, inflationary pressures are attributable to temporary factors such as used car prices and airfares, which are receding after a short-term surge. Trimmed mean PCE, which is now Jerome Powell’s favorite inflation indicator, is still relatively tame. 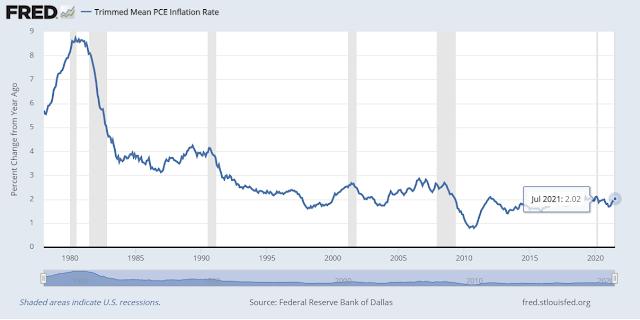 As well, 5×5 inflationary expectations are not running away, which should be comforting for policymakers.

The taper and rate hikes

Putting it all together, what does this mean for Fed policy? The July FOMC minutes imply that a taper decision is likely in 2021, though a move during the September meeting is unlikely. Going into Jackson Hole, the BoA Global Fund Manager Survey shows that the overwhelming consensus is the Fed will signal a taper during the August-September period. In other words, the market has fully discounted a taper announcement, though the timing is probably more dovish than market expectations. 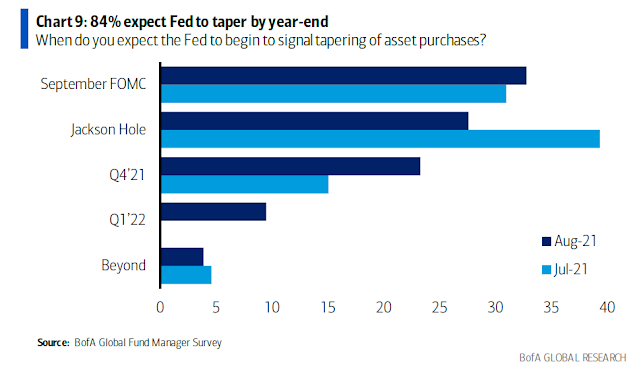 Tactically, that the exact timing of a taper announcement is unlikely this month.  The Fed’s communication strategy is likely to shift towards emphasizing the difference in criteria for taper and rate hikes. This makes a hawkish surprise difficult.
As for the timing of the first rate hike, the CME Fedwatch Tool shows that the market is expecting the first increase at the December 2022 meeting. 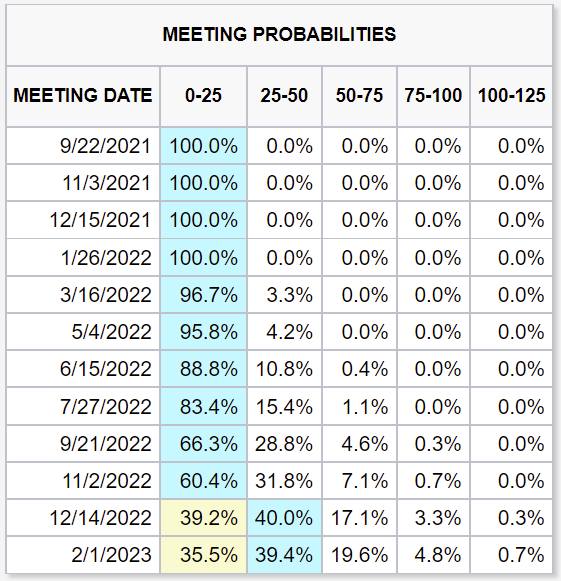 Frankly, it’s difficult to speculate far into the future. In a separate Bloomberg podcast, Dallas Fed President Robert Kaplan called for pulling the QE taper forward, which has the unintuitive effect of pushing a rate hike schedule further into the future.

Tapering could help take some of the pressure off the need to raise \interest rates in the future, according to the Dallas Fed president. “Adjusting these purchases sooner might actually allow us to be more patient on the Fed funds rate down the road,” he says. It’s a nice reminder that tightening monetary policy doesn’t have to be a monolithic or even linear activity.

In conclusion, investors need to be data-dependent rather than time-horizon dependent on the timing of Fed policy action. While there may be disagreement among Fed officials, the Neel Kashkari Bloomberg interview outlined many of the metrics that the Fed is monitoring, namely labor market tightness and the guideposts to full employment, and inflation expectations, as well as the interaction between the Fed’s full employment and price stability mandates.

9 thoughts on “A rate hike roadmap”