The remarkably resilient stock market – Humble Student of the Markets

The Chinese markets panicked on the news of government crackdowns on technology and education companies. As well, Beijing has been working to restrict the flow of credit to property developers in order to stabilize real estate prices. In reaction, foreigners have been panic selling Chinese tech on high volume.

Despite all of this carnage, the S&P 500 has been remarkably resilient.

Here is the best analysis of China’s policy changes that I have encountered (by Tom Westbrook via Reuters):

The new model appears to place common prosperity, as President Xi Jinping has put it, ahead of helter-skelter growth, investors say.
According to some analysts, it is the most significant philosophical shift since former leader Deng Xiaoping set development as the ultimate priority 40 years ago.
“Chinese entrepreneurs and investors must understand that the age of reckless capital expansion is over,” said Alan Song, founder of private equity firm Harvest Capital. “A new era that prioritises fairness over efficiency has begun”…

In the nine months that have passed since, developers, commodity speculators, crypto miners, other tech giants and, lately, tutoring firms, have all faced radical rule changes or had regulators aggressively poring over their businesses.

The policy pivot is “common prosperity”. Translated, this means the reduction of inequality in order to better support household sector spending.


Zhaopeng Xing, senior China strategist at ANZ, said the raft of policies, unveiled around the Chinese Communist Party’s centenary, underscores the political will to reinforce the Party’s roots.
“These policies were announced to reflect the Party’s progressiveness” and appeal to the masses, Xing said. “They send a message that China is not a capitalistic country, but embraces socialism.”
The messaging in the months running up to the Party’s July 1 centenary was also unequivocal, analysts say. “Common prosperity” is the over-riding long-term goal, Xi said early this year, and China’s development should be centred on people’s expectations of better lives, urban-rural gaps and income gaps.

Rather than blindly selling everything Chinese, investors should instead focus on the “Three Mountains”.

Investors have so far responded with alarm that tipped on Tuesday towards panic. They dumped health stocks (.HSHCI) in anticipation the sector will be next in the firing line, even as the property and education sectors reel.


Housing, medical and education costs were the “three big mountains” suffocating Chinese families and crowding out their consumption, said Yuan Yuwei, a fund manager at Olympus Hedge Fund Investments, who had shorted developers and education firms.

The markets have responded relatively rationally. The affected sectors have cratered. In particular, the shares of the “too big to fail” overly indebted property developer China Evergrande continue to skid.

For some context, China’s property bubble is huge. 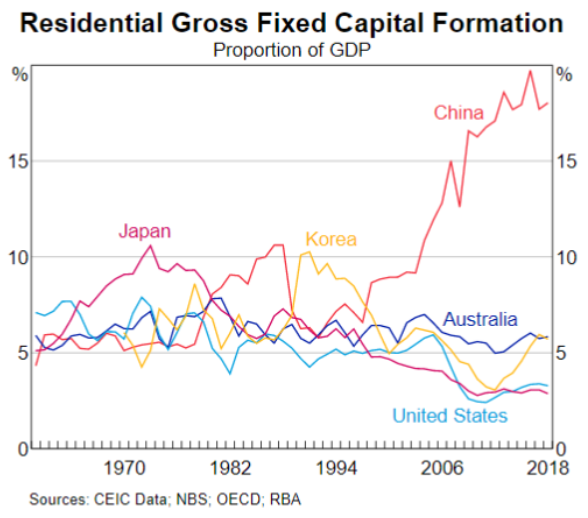 Moreover, anecdotal stories of foreigners fleeing the Chinese market should put pressure on the exchange rate. While the USDCNH rate has weakened slightly, it has been incredibly stable in the month of July. One of the key risks is a major Chinese devaluation. So far, there are few signs of CNH weakness. 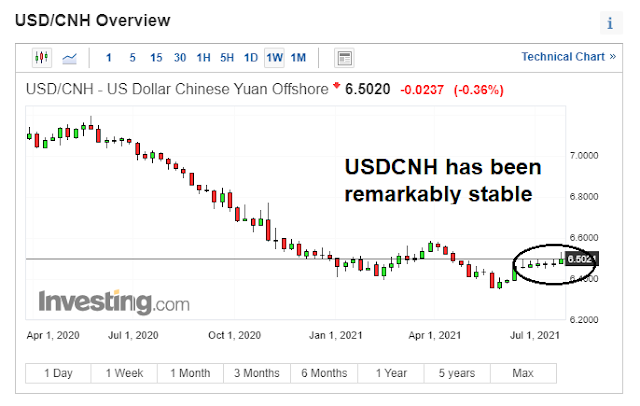 China’s blowup appears to have been contained. This argues for a buying opportunity in selected Chinese equities for investors who avoid the “Three Mountains”.

The word is “transitory”

Today is FOMC day and the Fed’s continued “stay the course” tone is not a surprise to me. In the FOMC statement and subsequent press conference, the Fed acknowledged progress with the recovery, with the caveat that substantial further progress is required. Moreover, the FOMC “will continue to assess progress in coming meetings” (plural). A taper would be no surprise, but the sequence of a QE taper, followed by rate hikes will take a long time.
The good news is the inflation spike is turning out to be transitory. Delivery times have been correlated with CPI, and delivery times and supply chain bottlenecks are beginning to ease. 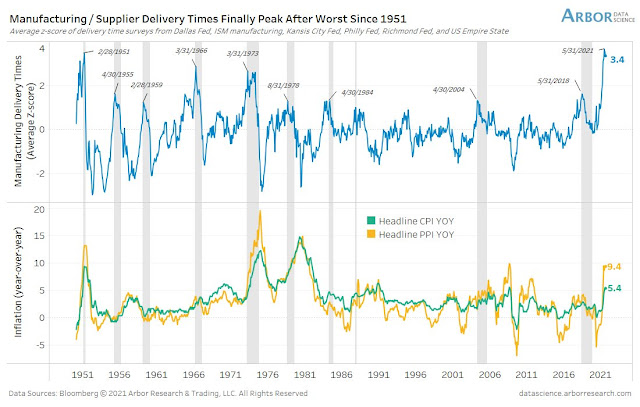 Labor markets are normalizing, though labor shortages are not. Arindrajit Dube, who is an economist at UMass Amherst, analyzed the effects of moving from unemployed to employed in the states that shrunk UI early and found that the UI effect has been modest at best. 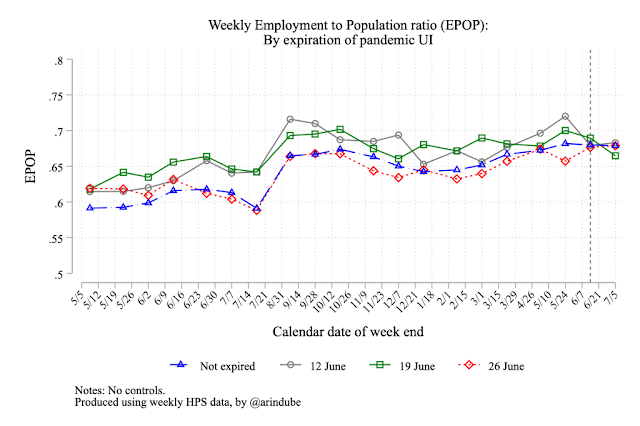 Labor markets are tightening, which is also positive from the Fed’s perspective. The anecdotes from the Dallas Fed’s Texas Service Sector Outlook Survey tell a story reduced labor supply in all tiers.

We continue to see improved demand for legal services. The winter storm instigated a lot of legal work. We are continuing to see increases on the transactional side and perhaps a bit of a slowdown in large bankruptcy filings. There is huge competition for talent right now—particularly for corporate lawyers. There is a lot of pressure on associate salaries, and we have implemented a new pay scale for associates that will feature retroactive bonuses.
A shortage of technology professionals continues to impact the ability to deliver. Sales look like they’ll pick up in the fall based on more purchasing decisions being made.
[Food services] We are hiring a few employees after the federal [unemployment] subsidy ended but continue to lose others oftentimes because they say they don’t want to work or decide to attend a social function and walk off. They know they can get hired again by walking down the street. Hire three, lose four. Hire two, lose one. I have never seen anything like this in my almost-40 years of working. We continue to turn away business due to lack of employees. Raw product prices continue to significantly increase. It is difficult to raise prices, but we will have to soon. Our downtown area remains sparsely populated with little activity, which is critical to our business.

This feeds into the Fed’s objective of running a hot economy in order to reduce inequality. In the press conference, Powell would not be pinned down on the definition of maximum employment: “There is not a signal number.” Eventually, this will lead to inflation, but that’s a problem for 2023 and beyond (see How to engineer inflation).
The Fed is staying the course. In all likelihood, there will be some discussion about the process of tapering QE purchases at Jackson Hole that may cause some temporary volatility. The Fed is staying the course.
Equity investors should also stay the course. The S&P 500 staged a classic bounce off its 50 dma and it broke out to another fresh high. The breakout is holding. There will be some individual days of choppiness as we progress through earnings season.

This is a bull market.