The S&P 500 took fright last Monday and skidded -1.6% after falling -0.8% the previous Friday. Talking heads attributed the decline to worries about the rising incidence of the Delta variant around the world.

Fears over the Delta variant slowing economic growth are overblown. However, there are two other key risks that equity investors should be watching.

There are two reasons why the Delta variant shouldn’t be an impediment to rising stock prices. First, it is well under control in the well-vaccinated developed markets. Consider Spain as an example. Spain’s vaccination rate resides in the middle of the pack of developed economies. It is below the well-vaccinated countries like Israel and the UK, and above the rest of the EU and the US. 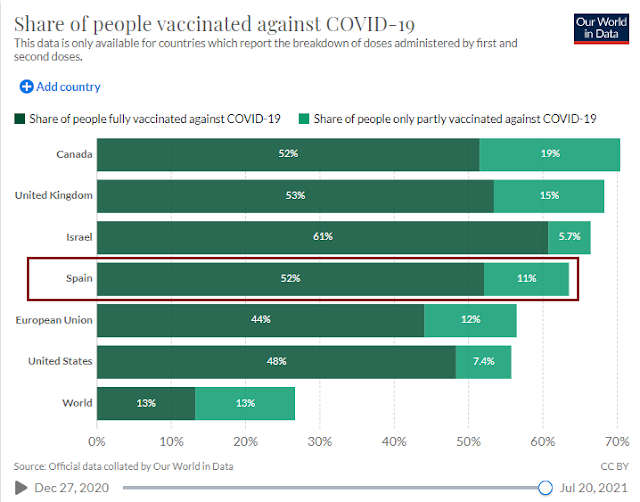 Here are the infection and hospitalization rates for Spain. While the infection rate has skyrocketed because of the Delta variant, cases are mild and the hospitalization rate has been flat. To be sure, Israel’s Ministry of Health reported last week that the effectiveness of the Pfizer/BioNTech vaccine in preventing symptomatic illness had fallen to 64% from 95% in May before the Delta variant became prevalent. Nevertheless, it is still 93% effective in preventing hospitalizations and serious illness. In short, vaccines work. As long as they are effective and available, the global economic recovery should continue. 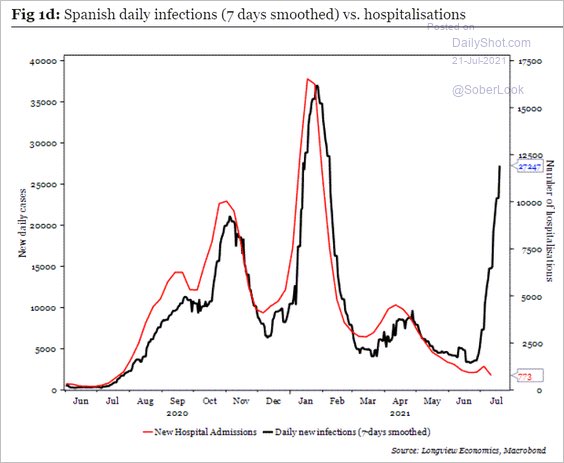 Here is even more good news from the UK. Ian Shepherson of Pantheon Macro pointed out that “UK Covid cases today down 17% compared to a week ago, when they were elevated by Euro 2020 final parties/wakes. The point is that these events seem not to have triggered a further surge.” 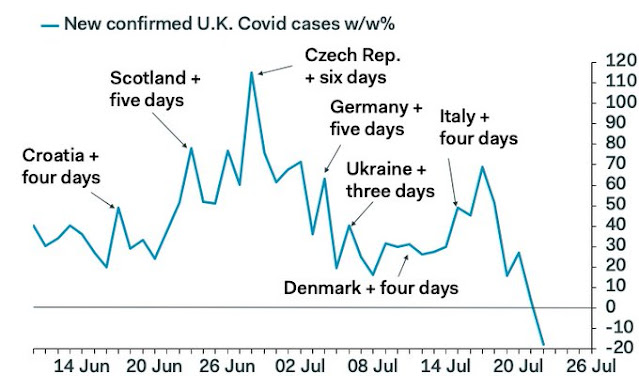 While every COVID-19 death is a human tragedy, the market is far more mercenary and only focuses on growth outlook and interest rates. The risk to stock prices from the Delta variant is the effects on economic growth. Bill McBride at Calculated Risk maintains a monitor of “Seven High Frequency Indicators for the Economy”. Despite the fears of the rising Delta variant infections stalling the recovery, none of the seven indicators are showing any signs of slowdowns. As an example, here is Apple’s tracking of mobility in selected American cities. Activity is not rolling over. 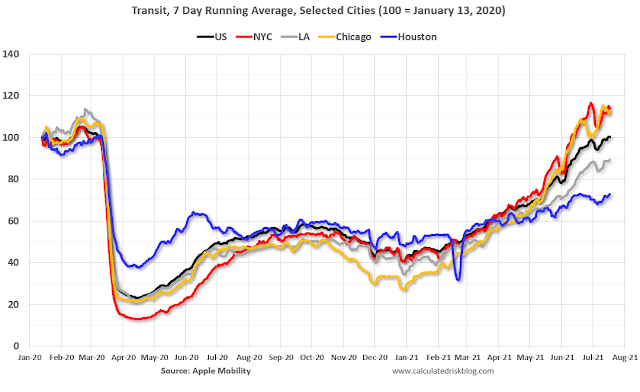 As the lockdown eased, travel began to return to normal. The 7-day moving average of TSA checkpoint travel has been steadily rising and there are no signs of a stall. 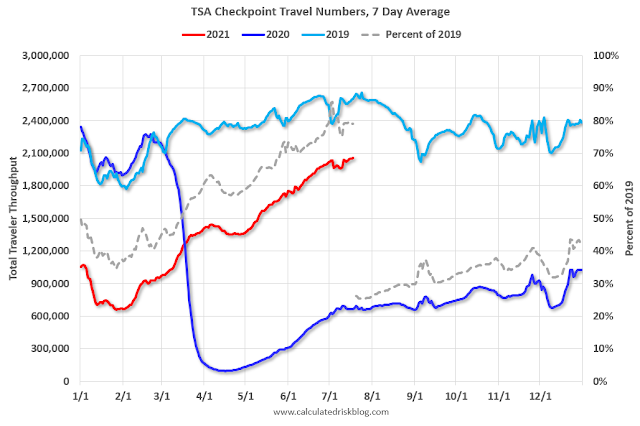 The same could be said of movie box office receipts. 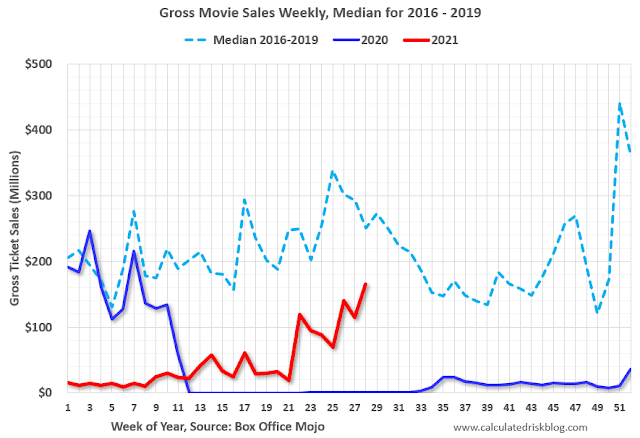 I could go on, but you get the idea. The other indicators that McBride monitors are hotel occupancy, gasoline usage, restaurant reservations, and New York City transit usage. From a global perspective, the Goldman Effective Lockdown Index shows that the Delta variant hasn’t slowed progress in reopening. 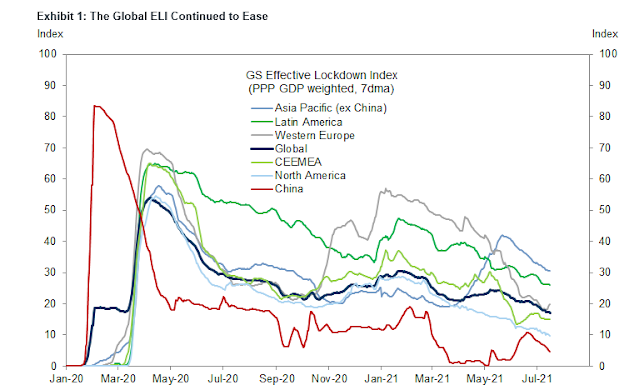 The challenge for policymakers is the pace of vaccinations. In particular, Asian economies have lagged in their vaccination rates. Jurisdictions like Taiwan and South Korea implemented lockdown policies that were effective in slowing transmission to a crawl in order to buy time for vaccine development. Now that vaccines are available, most Asian countries have been slow to vaccinate their population. Even Latin America has managed to make better progress than Asia. The headlines from the Olympics in Japan, a major G-7 developed economy, are testament to the slow rollout of Asian vaccinations. 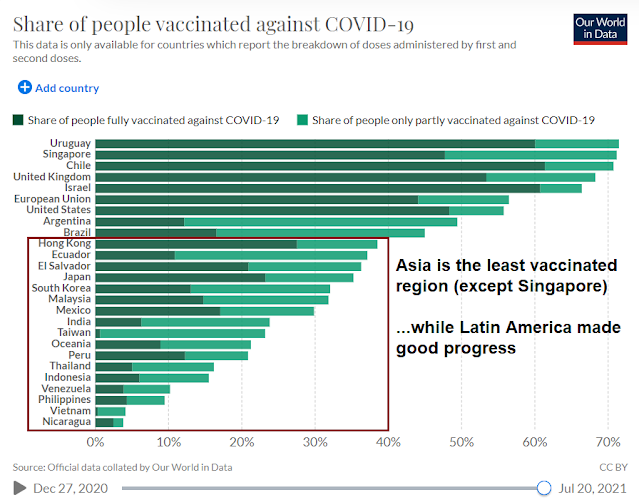 The lagging ASEAN vaccination rates underline a key risk of an Asian growth stall. The performance of the Chinese stock market and the markets of her major Asian trading partners relative to MSCI All-Country World Index (ACWI) shows that virtually all markets have either broken relative support or are testing relative support. While the weakness of Chinese shares may be attributable to recent policy shifts, all countries in the region are lagging compared to global stocks. It is unclear, however, whether this is attributable to the slow pace of Asian vaccinations or rising tail-risk from China. 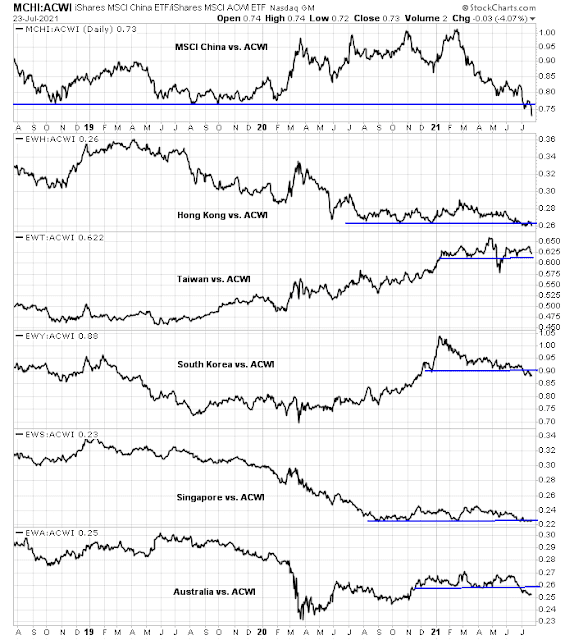 Chinese property developers are showing signs of stress after Beijing implemented a series of measures to curb property lending. China Evergrande (3333.HK) has been the poster child of overleveraged developers and it has been viewed as a “too big to fail” company by many. Its shares tumbled when a Chinese court froze 132 yuan, or USD 20 million, in deposits from Evergrande Real Estate and its subsidiary Yixing Hengyu Real Estate. Subsequent to that event, other Asian lenders stopped providing mortgages to Evergrande’s Hong Kong properties. The company’s share price has tumbled and violated key technical levels.

More importantly, selected Evergrande bonds are trading at 50% discounts to par value. The discounts on offshore bonds are greater than domestic issues, indicating a market expectation that foreigners will bear the brunt of any restructuring. 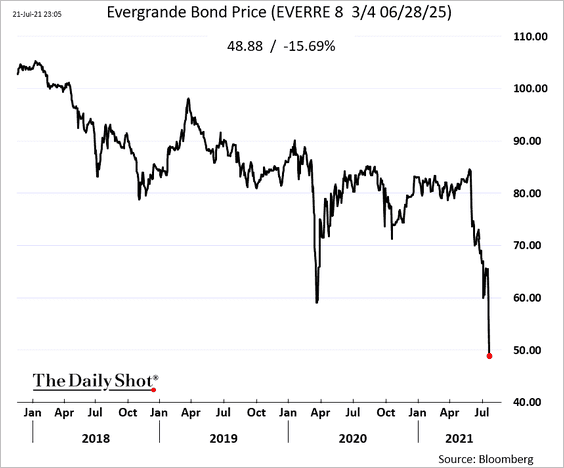 The shares of other property developers are also getting hit and they have either violated or are testing important long-term support.

The real estate sector in China absorbs a disproportionate level of savings in that country. Wobbles in the Chinese property market represent a tail-risk that has the potential to destabilize China’s financial system and cause ripples throughout the world. How China Evergrande’s debt will be resolved will ultimately be a political decision made in Beijing, as summarized by the WSJWSJ.

Ultimately, Evergrande’s fate rests with Beijing. The government’s drive to curb property sector debt has weakened funding for developers, sparking Evergrande’s current crisis. Given the importance of housing to China’s overall economy, tightening and easing policies usually come in cycles. But reining in the relentless debt-fueled expansion of companies like Evergrande, which pose an increasing systemic risk, seems likely to remain a top policy priority.
The government will try to contain any ripple effects to the financial system or home buyers but not all investors will be spared pain.

There is one silver lining in the Chinese dark cloud. The commodity markets are holding up well, which is constructive for the global economic outlook as China is the largest consumer of many raw material inputs. Commodity prices are holding above their 50 and 200 dma, and the cyclically sensitive base metals to gold ratio has been trading sideways despite the bearish signals from the 10-year Treasury yield. 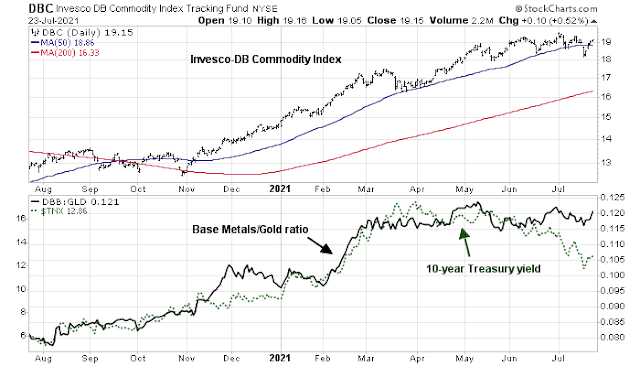 As well, the relative returns of Chinese material stocks to global materials are strong, which is an implicit signal of cyclical strength from China. Commodity strength is surprising in light of the news that China plans to sell 170,000 tonnes of non-ferrous metals in another round of auctions, according to state media Xinhua.

Callum Thomas of Topdown Charts confirmed the signs of underlying economic strength in Asia. He pointed out that Asian metal user PMIs have begun to accelerate after lagging the US and Europe. 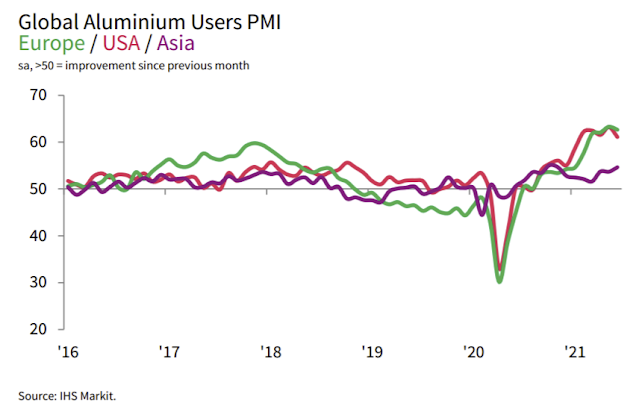 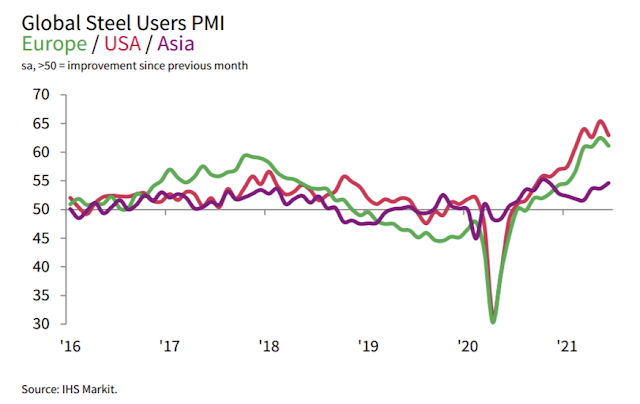 These readings are consistent with the observation that global reopening is proceeding with or without the Delta variant.

Another key risk to the market comes from Washington. Growth expectations are rising, and legislative maneuvers have the potential to derail growth expectations.
As an example, Marketwatch reported that JPMorgan strategists recently raised their S&P 500 year-end target from 4400 to 4600 and S&P 500 2021 earnings by $5 to $205.

“We remain constructive on equities and see the latest round of growth and slowdown fears premature and overblown,” said the JPMorgan team, led by Dubravko Lakos-Bujas. “Even though equity leadership and bonds are trading as if the global economy is entering late cycle, our research suggests the recovery is still in early-cycle and gradually transitioning toward mid-cycle.”
The strategists base the S&P 500 upgrade on “strong earnings growth and capital return until 2023.” Their S&P 500 earnings per share estimate for 2021 was lifted $5 to $205 and by the same amount for 2022 to $230, and gross corporate buybacks are seen surpassing a first-quarter 2019 record of $850 billion.

As well, bottom-up earnings estimates continue to rise. While these developments appear bullish and indicative of short-term fundamental momentum, equity investors could be wandering into a minefield in the coming months. 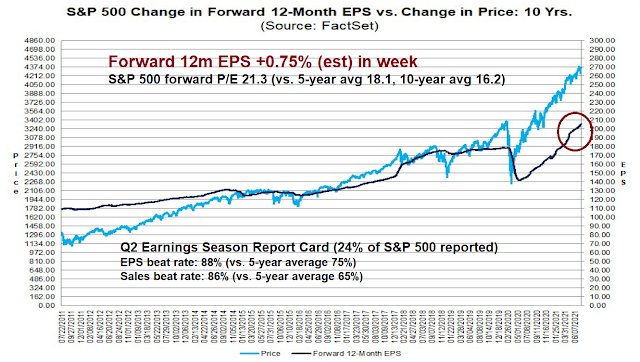 The first risk is a corporate tax increase, which is not in most analysts’ spreadsheets yet. Bloomberg reported that Treasury Secretary Janet Yellen is setting out a timeline to implement a global corporate minimum tax:

U.S. Treasury Secretary Janet Yellen began to put a timeline on when the Biden administration hopes Congress can take up two key portions of a global tax agreement endorsed Saturday by Group of 20 finance ministers in Venice…
“The details of pillar 1 remain to be negotiated,” she said. “We will work with Congress — maybe will be ready in the spring of 2022 — and try to determine at that point what’s necessary for implementation.”
The accord is on track to be finalized at the G-20 leaders’ summit in Rome in October, and finance ministers have said they foresee global implementation in 2023.

No matter what happens with the negotiations, corporate tax rates will rise. Bottom-up company analysts have not adjusted their earnings estimates because it’s impossible to do so without knowing the details of the legislation. Some top-down strategists have begun to pencil in the effects of a tax increase using a variety of scenarios. However, these changes have not crept into the consensus market narrative and could represent a negative surprise in the coming months.
In addition, another debt ceiling drama is looming in Washington. The Congressional Budget Office published a report last week which estimates that the Treasury would run out of cash in October or November. While the consensus expectation is the Treasury would not be forced to default on its debt, the political jockeying is already starting and could unsettle markets in Q3 or early Q4. The US Treasury has announced that it will “need to start taking additional extraordinary measures” to prevent default if Congress doesn’t act by August 2.

Despite these risks, I remain intermediate-term constructive on the equity markets. Fathom Consulting recently decomposed the sources of market returns based on cash flow (blue line) and sentiment (green line). While sentiment is elevated and comparable to the dot-com era, equity prices are supported by strong cash flows. 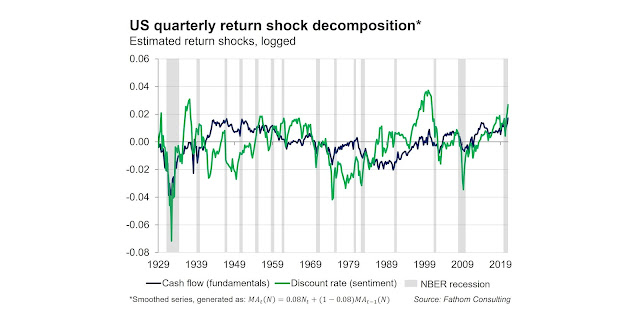 In conclusion, while there are some risks to the equity outlook to be concerned about for the remainder of 2021, stalling growth from the Delta variant is not one of them for most advanced economies. Nevertheless, investors should monitor rising China tail-risk as overleveraged property developers like China Evergrande wobble financially. As China Evergrande falls into the “too big to fail” category, I expect Beijing would step in to resolve any defaults in an orderly manner to minimize the fallout. In addition, US equity prices may stumble once the market gains greater clarity on Biden’s plan to raise corporate tax rates.
From an economic perspective, the global recovery should continue into 2022 and beyond and be supportive of higher stock prices. Expect some volatility over the coming months, but investment oriented accounts should maintain their equity commitments.

13 thoughts on “What you should and shouldn’t worry about”