The anatomy of an air pocket – Humble Student of the Markets

Mid-week market update: I could tell that a panic bottom was near on Monday when how many people had lost their minds when the S&P 500 fell -3.7% from its intraday all-time high, both from my social media feed and emails (see A sudden risk-off panic). The S&P 500 rallied impressively on Tuesday to fill Monday’s downside gap, and today’s follow-up was equally constructive.

Despite the market’s recovery, the bulls aren’t out of the woods and downside risks remain. Here’s why.

Down Friday and Mondays

Hirsch believes the market action in the next few days will yield greater clarity to the market’s intermediate-term direction.

Based upon the above chart, if DJIA recovers its recent losses within about 4-7 trading days, then the DF/DM that just occurred may have been the majority of the decline. However, if DJIA is at about the same level or lower than now after this window, additional losses are more likely over the next 90 calendar days.

Here is what I am keeping an eye on. The fright hasn’t fully receded from the bond and currency markets. The 10-year Treasury yield fell as far as 1.13% on Monday. While it has recovered, it is still in a downtrend, indicating market caution. As well, the USD is a safe haven currency and it is still advancing. These two cross-asset signals represent the most worrisome indicators from a risk appetite perspective. 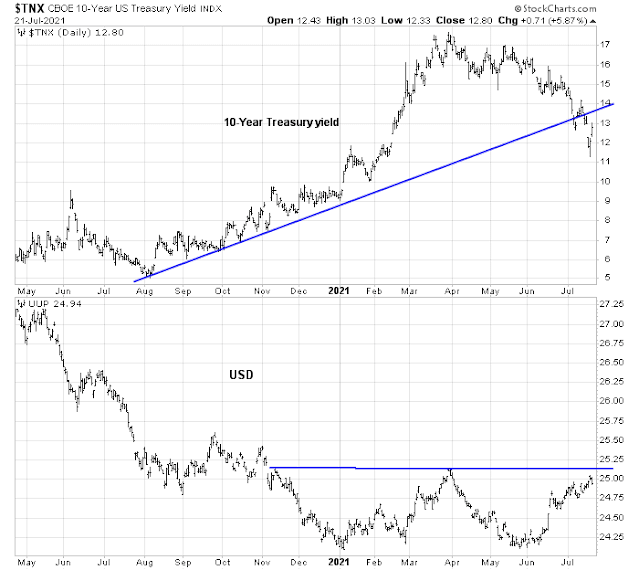 Credit market risk appetite is also mildly concerning. The relative price performance of junk bonds to their duration-equivalent Treasuries is flashing a minor negative divergence against the S&P 500. These minor divergences have occurred in the past and they are not actionable signals by themselves. When paired with heightened risk levels, however, this divergence is something that should be monitored.

Defensive sectors of the market staged brief upside relative breakouts on Monday but retreated to test their breakouts. If the bears are to seize control of the tape, these sectors must regain and maintain their breakout levels. 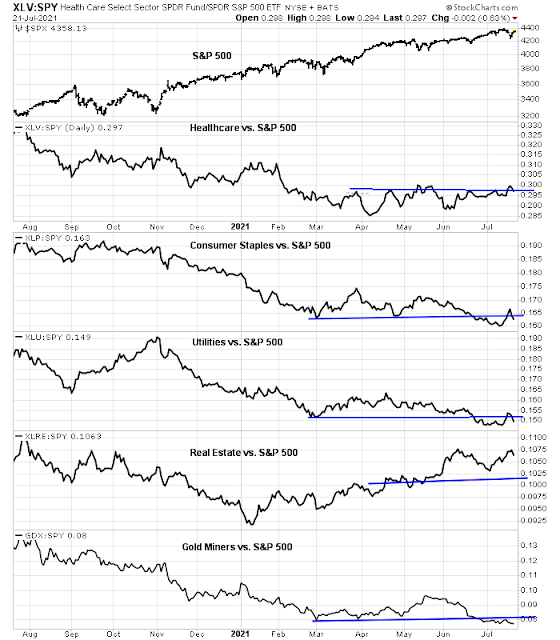 The VIX Index rose above its upper Bollinger Band on Monday, which is the signal of an oversold market, and recycled below its upper BB. The S&P 500 duly rallied as a result. However, this condition does not preclude a retest or even an undercut of Monday’s lows. If the past is any guide, any market weakness will begin after the VIX touches its 20 dma.& 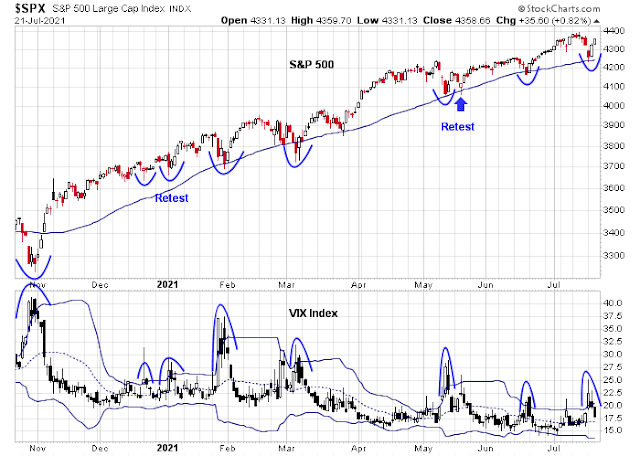 My inner investor remains bullishly positioned. My inner trader is tactically long the S&P 500. He plans to exit most if not all of his position once the VIX falls to its 20 dma. Stay tuned.
Disclosure: Long SPXL

30 thoughts on “The anatomy of an air pocket”