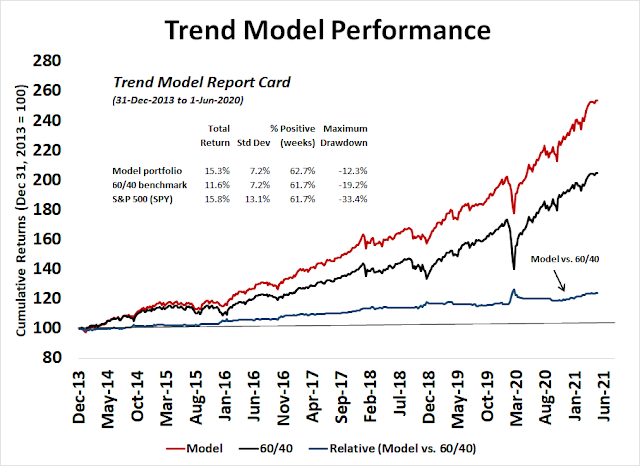 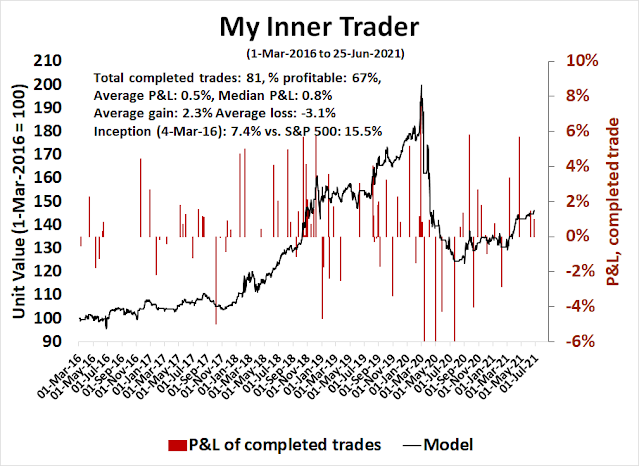 The Fed’s hawkish pivot and reversal

In the wake of the Fed’s unexpected hawkish message, the markets adopted a risk-off tone the week of the FOMC meeting. As Fed officials walked back the aggressuve rhetoric, both the S&P 500 and NASDAQ 100 resumed their advance and climbed to all-time highs. 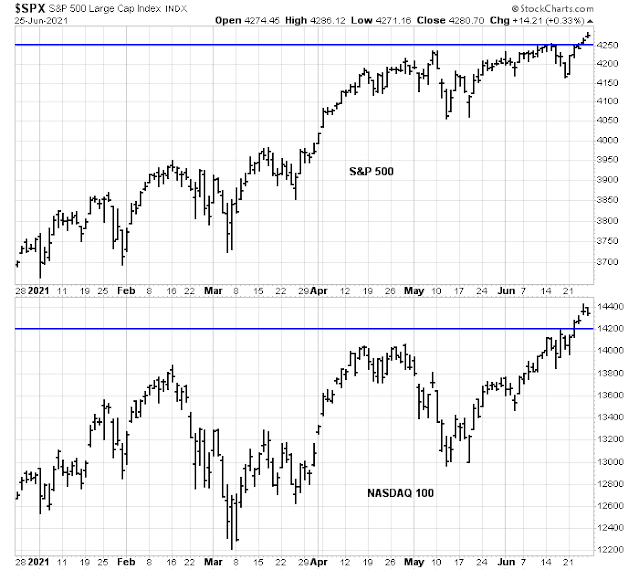 Beneath the surface, however, there was some unfinished business as the internal rotation sparked by the FOMC meeting hasn’t unwound itself. Let’s take a more detailed look.

Starting with the bond market, the 10-year Treasury yield spiked and rose above a key support turned resistance level in reaction to the FOMC message. Yields retreated below support as the Fed moderated its tone but rose again to test resistance on Friday. The 2s10s yield curve, which had begun to flatten starting in late May, continued to flatten during this period. 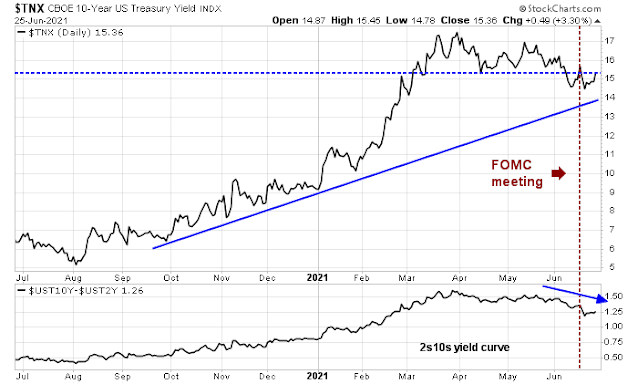 Given the high duration and interest rate sensitivity of growth names, the decline in the 10-year yield has put a bid under the NASDAQ 100.

How persistent is the growth revival?

Investors can get some clues from cross-asset analysis. The cyclically sensitive copper/gold and base metal/gold ratios are showing some signs of strength, signaling global reflation. If this trend continues, it should put upward pressure on the 10-year yield.

Cross-asset analysis of gold and gold-sensitive assets tells a similar story of reflation. The USD strengthened (bottom panel, inverted scale) in the aftermath of the FOMC meeting. The greenback’s rally has reversed itself and weakened. Similarly, TIPs prices fell after the FOMC, but have rallied to test their old highs. Gold prices have been consolidating sideways during this period, but as gold tends to be positively correlated with TIPs prices and negatively correlated with the USD, this environment should be bullish for gold. 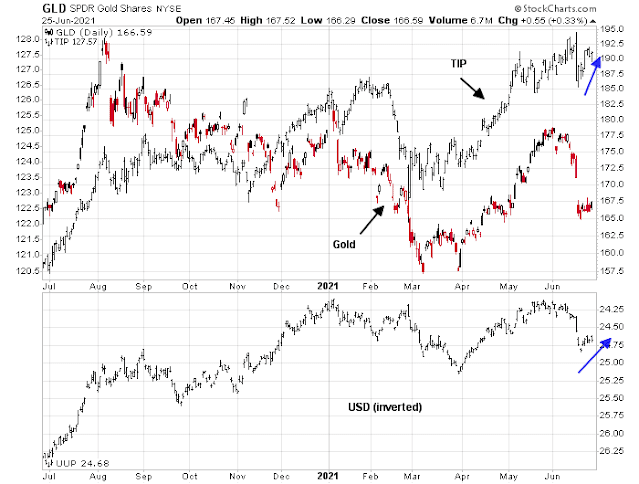 JPMorgan also estimated that CTA positioning in gold is a crowded short extreme. The odds of a bullish reversal is high. 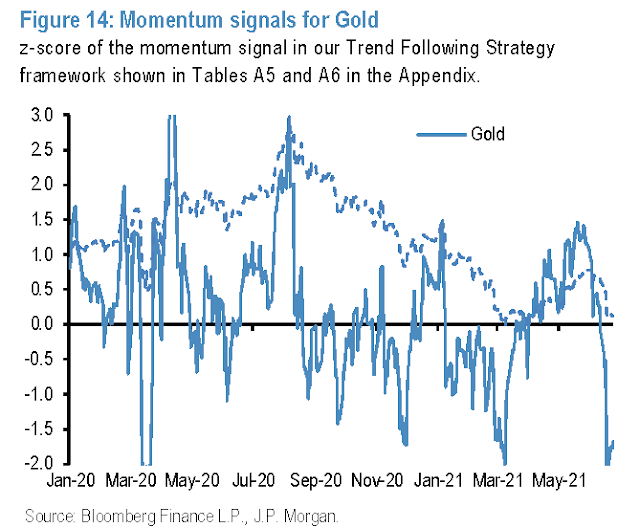 In addition, Mark Hulbert pointed out that gold newsletter market timers had turned bearish, which is contrarian bullish:

The HGNSI has moved from close to the 90th percentile of the distribution to the 14th. Some may consider that already to be a big enough drop to support a rally; other contrarians may insist on waiting until it drops into the bottom decile — the threshold for which is minus 14.8%. Depending on gold’s action this week, that could happen within a matter of days. 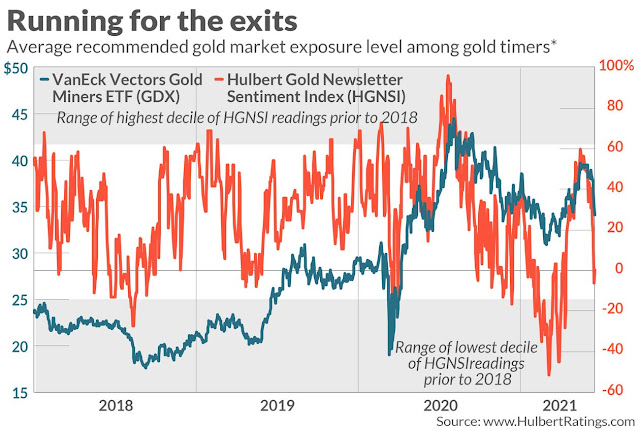 Over in the stock market, the relative performance of cyclical stocks has largely lagged the market during this period, though deep cyclicals like energy and metals and mining are exhibiting a bit more strength than other cyclical groups. Even news of President Biden’s bipartisan infrastructure deal didn’t move the needle on these stocks. 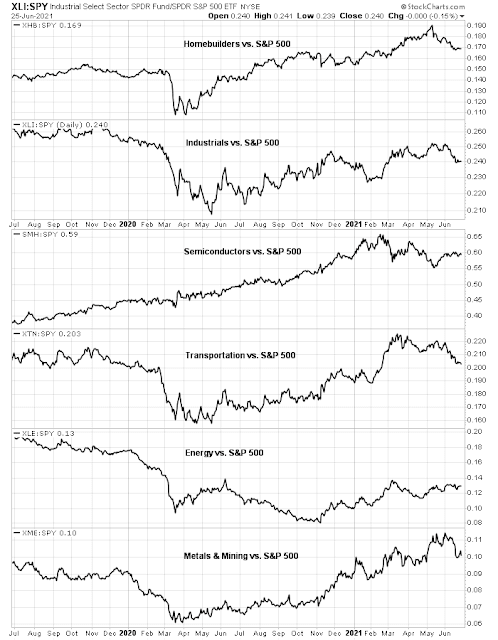 In short, equity investors are not fully convinced about a revival of the reflation trade. As cyclical sectors have a high overlap with value stocks, we can also see this effect in the value and growth relationship. The value/growth ratio has broken a key relative support level, and breadth is weak for value. However, the ratio is exhibiting a (value) bullish RSI divergence, indicating that a reversal could be near. 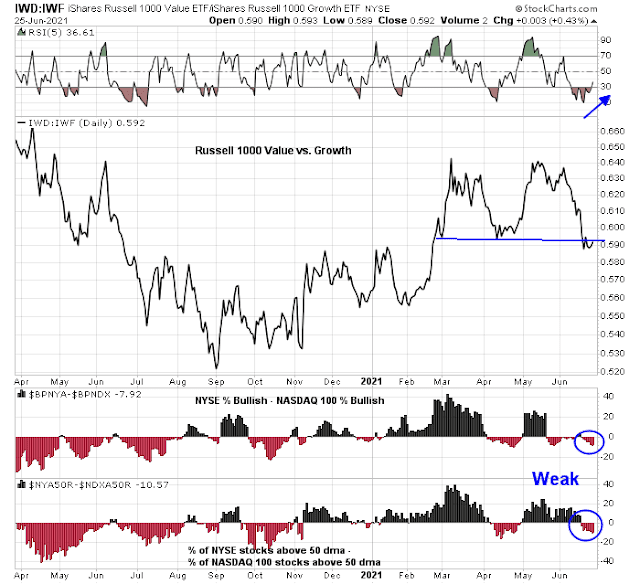 To be sure, the current advance has been marked by numerous worrisome breadth divergences. In particular, the NYSE Advance-Decline Line has failed to confirm the fresh highs. 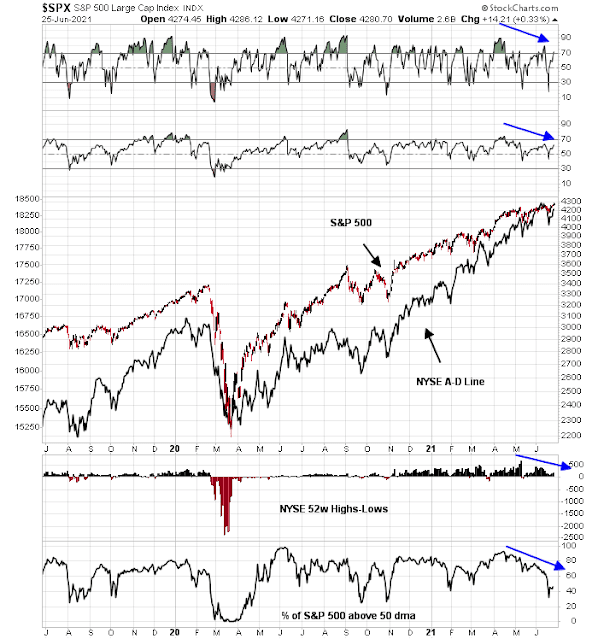 As well, SentimenTrader issued a warning about the NASDAQ breadth weakness in the face of new highs. 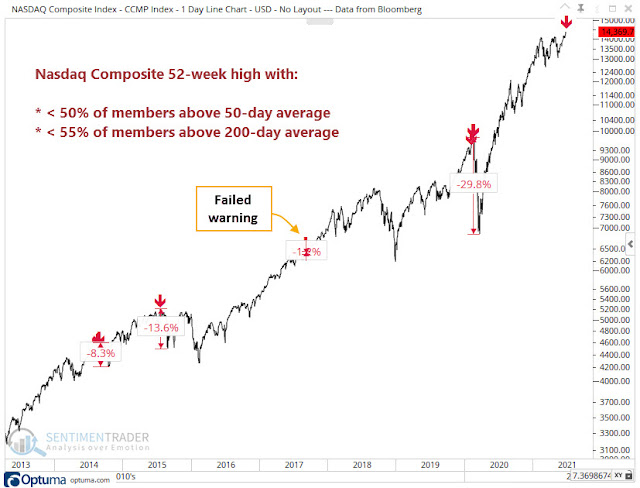 On the other hand, FactSet reported a surge in earnings estimates and a record number of companies with positive earnings guidance. This should be supportive of equity valuation and equity price gains. 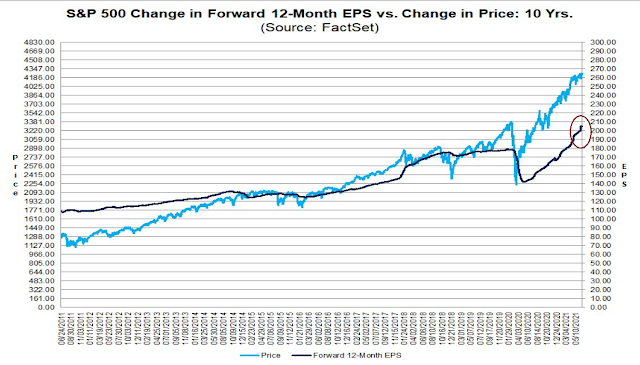 RSM US chief economist Joseph Brusuelas pointed out that there is $1.6 trillion in excess savings on household balance sheets, which translates to a tsunamic of post-pandemic consumer demand. 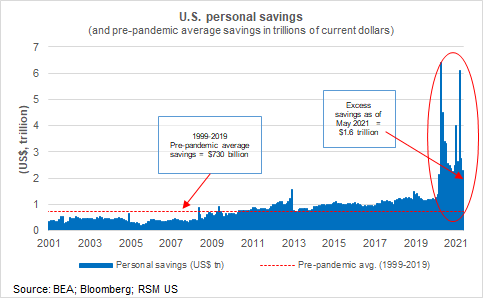 I interpret this as the stock market may have gotten ahead of itself and it may be due for a period of sideways consolidation and minor weakness, but strong underlying fundamentals will put a floor on stock prices should they correct. Ryan Detrick of LPL Financial observed that this bull has been extraordinarily strong. In the past, the market has experienced some choppiness after robust first year gains. That’s my base case scenario.

In summary, the “round trip” exhibited by the major averages after the FOMC meeting is hiding a number of rotational reversals. While growth stocks are in ascendancy, cross-asset analysis strongly suggest that the reflation and value trade is about to regain the upper hand. However, negative breadth divergences are flashing warning signs that possible weakness or sideways consolidation is ahead.
Disclosure: Long GDX

21 thoughts on “Measuring the effects of the Fed’s reversal”