I have been asked to comment on Bitcoin. On a short-term basis, BTC is testing support while exhibiting a positive RSI divergence. That’s the good news. 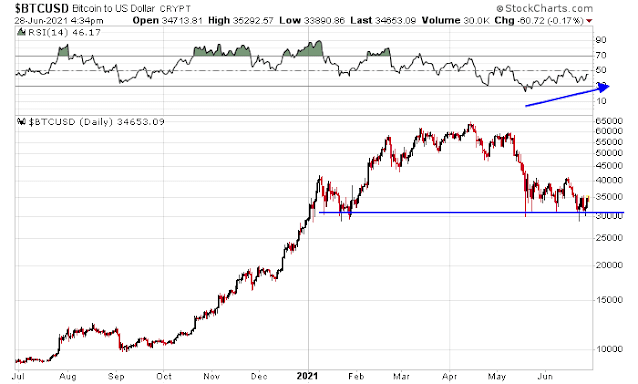 The bad news is BTC and other cryptocurrencies are facing an existential threat.

I came across a Decrypt article entitled “Quantum computers could crack Bitcoin by 2022”. While the 2022 time frame is a bit of hyperbole, the point is well taken.

If you had a powerful enough computer, you could, theoretically, take control of the Bitcoin blockchain. You could credit your account with free Bitcoin or prevent others from making transactions. Since the private key to each wallet can be derived from a public key, you could access the Bitcoin wallet of whomever you wished. The keys to the $163 billion castle would be yours—of course, in that scenario, Bitcoin’s price would surely plummet as soon as its claims of invulnerability were found to be baseless.
Whereas even the most powerful supercomputer would take thousands of years to crack Bitcoin, there are machines that could, theoretically, do so in a matter of seconds. These ultra-fast devices are called quantum computers.
And they’re real—currently in development by some of the finest minds on the planet.
Some experts told Decrypt that it’s already too late for Bitcoin; quantum computers, developed in secrecy by governments, could corrupt the blockchain in just a few years’ time.

Bitcoin uses something called the Elliptical Curve Digital Signature Algorithm (ECDSA) to sign digital signatures, and uses a cryptography standard called SHA-256 to hash blocks on the chain.
With Bitcoin, a private key, picked at random, is run through these algorithms to generate a public key. And the Bitcoin protocol uses the hash value of this to create a public Bitcoin address.
A quantum computer could reverse this process and derive the private key from a public one. And voila! Bitcoin’s claim of inviolability and unhackability is gone, and you have access to any Bitcoin wallet you want.
Two major quantum algorithms that threaten the current state of cryptography have already been developed: Grover’s and Shor’s algorithms.
Rob Campbell, President at Baltimore, Maryland-based Med Cybersecurity, told Decrypt that quantum computers using both Grover’s and Shor’s algorithm could also “mine much faster than everyone else, and therefore an adversary could insert its own blocks and undermine the entire blockchain.”

But Campbell said that major companies, such as Google, Amazon, Microsoft and IBM are making “rapid progress,” as are a host of smaller companies.
So how long until the quantum computing threat becomes a problem for Bitcoin? It depends whom you ask. At the World Economic Forum in Davos, Sundar Pichai, CEO of Google’s parent company, Alphabet, was among the first major figures to put a deadline on it. He said: “In a five to 10 year time frame, quantum computing will break encryption as we know it today.”

Researchers have discovered a new and more efficient computing method for pairing the reliability of a classical computer with the strength of a quantum system.
This new computing method opens the door to different algorithms and experiments that bring quantum researchers closer to near-term applications and discoveries of the technology.
“In the future, quantum computers could be used in a wide variety of applications including helping to remove carbon dioxide from the atmosphere, developing artificial limbs and designing more efficient pharmaceuticals,” said Christine Muschik, a principal investigator at the Institute for Quantum Computing (IQC) and a faculty member in physics and astronomy at the University of Waterloo.

These factors put into question the security of a cryptocurrency wallet. Occasionally, there have been stories about investors losing control of their wallets owing to irregularities at a cryptocurrency platform. A recent example occurred in South Africa:

Two brothers associated with one of South Africa’s largest cryptocurrency investment platforms, along with their $3.6 billion USD in Bitcoin, have vanished, according to Bloomberg.
The outlet reported that Hanekom Attorneys, a law firm in Cape Town, said they cannot locate Ameer and Raees Cajee, the founders of Africrypt, and have filed missing person reports to the Hawks, the country’s national police force. The firm also informed crypto exchanges across the world in case there is any attempt to convert the blockchain-backed coins.
In April, Africrypt told its investors that it had been hacked and asked that they did not report the incident to authorities, citing that government involvement would “slow down” the recovery of their missing funds.
“We were immediately suspicious as the announcement implored investors not to take legal action,” the law firm told Bloomberg. “Africrypt employees lost access to the back-end platforms seven days before the alleged hack.” Hanekom Attorneys discovered that the exchange’s pooled funds had been transferred out of its South African accounts and into “tumblers and mixers,” or larger pools of Bitcoin, which made them virtually untraceable.

If you are a cryptocurrency investor, you are holding hot potatoes whose value could plummet to zero in 5-10 years’ time. You may enjoy the party now, but one day these assets are going to turn into digital beanie babies.