A change in leadership? – Humble Student of the Markets 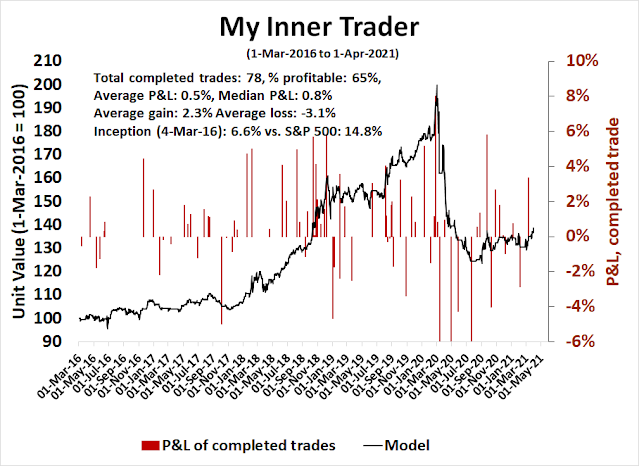 The revenge of the tech nerds?

A reader pointed out an unusual market anomaly last week. Market leadership had shifted significantly some time during Q2 or Q3 2020. The old Big Three leaders of US over non-US stocks, growth over value, and large-caps over small-caps had made unmistakable trend reversals. Recently, even as the S&P 500, the Dow, and the Transports made fresh all-time highs, leadership was shifting back. US equities are dominant against non-US again; NASDAQ stocks are enjoying a minor revival; and small-caps are faltering against their large-cap counterparts. 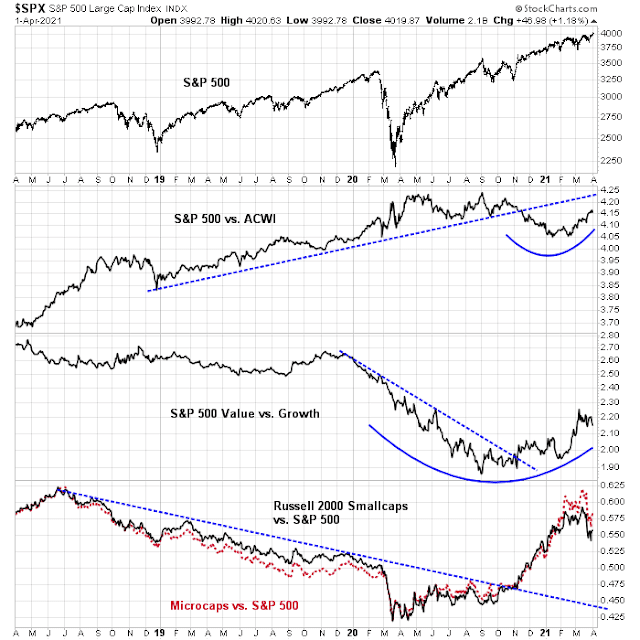 Is this the start of a reversal, or just a blip? 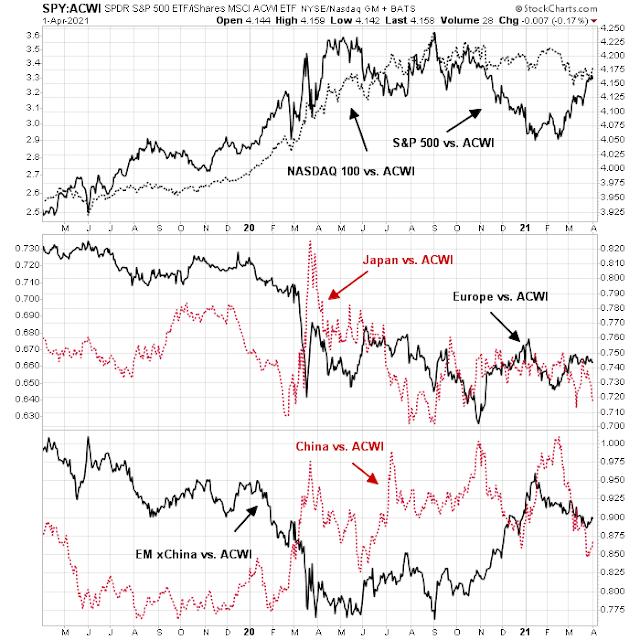 A more detailed analysis of the US (top panel) shows a significant divergence. Even as the S&P 500 had sprinted ahead on a relative basis this year, the NASDAQ 100 was flat to down against ACWI. The difference between the S&P 500 and NASDAQ 100 represents the difference between value and growth. It was the value factor that had been driving the recent US outperformance.
In fact, the relative return patterns of the Russell 1000 Value Index against the S&P 500 and the EAFE Value Index against the MSCI EAFE Index (Europe, Australasia, and the Far East) are virtually identical.

I interpret this to mean that there have been no recent significant global regional leadership trends, but the value factor has been dominant in global equity returns.
What about the reversal in small-cap stocks? An analysis of the global size factor reveals that small-caps have been rising against their large-cap counterparts in a steady but uneven fashion all over the world. The biggest laggards have been Chinese and Japanese small-cap stocks, which had been in relative downtrends until they began to outperform in the last two months. 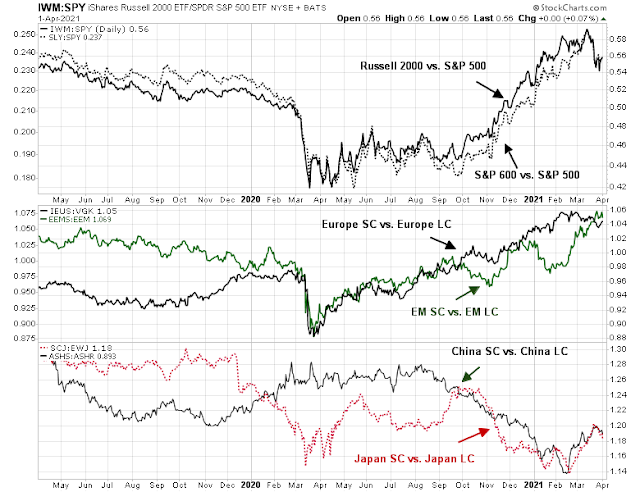 The pause in US small-cap outperformance appears to be just that – a brief pause. The long-term leadership of non-US over US, value over growth, and small-caps over large-caps should continue.

The one wildcard to the continued leadership scenario is the possibility of a bond market rally. The Treasury market has been clobbered recently, and here is why.
The chart below shows quarterly changes to the JPMorgan Forecast Revision Index, which measures how economic forecasts have changed either upward or downward over the course of the quarter. The recent upward lurch in the index was the biggest upward move in its entire history, indicating an unprecedented pace of expected economic growth. The expectations of a strong recovery have depressed bond prices. 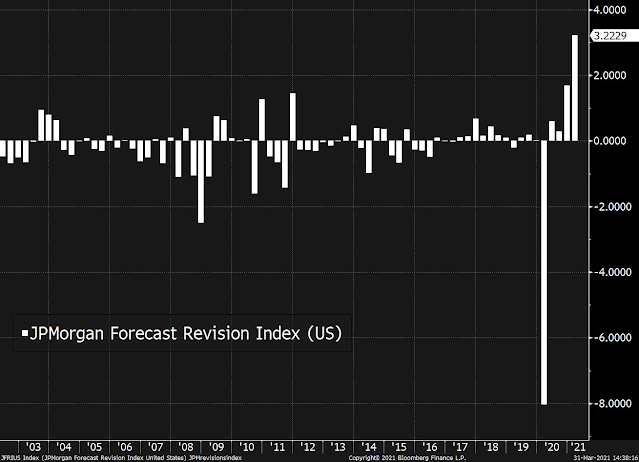 The long Treasury bond ETF (TLT) is testing support and exhibiting a positive RSI divergence. There have been three similar episodes in the last 10 years. Bond prices rallied strongly the last time this happened in 2018. On the other two occasions, the selloff was halted and the bond market traded sideways.
As well, the bear flattener reaction of the bond market to Friday’s blockbuster March Jobs Report was constructive. While yields did rise across the board, the yield curve flattened – there may be life in the long bond even in the face of bad bond market news. 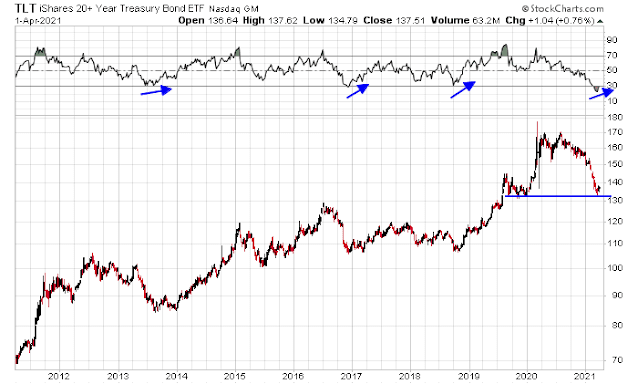 As the relative performance of growth stocks is sensitive to bond yields, a bond market rally could provide the impetus for a reversal of value and growth factor returns.

Regardless of what happens to equity factors, investors need to recognize that this is a bull market. There is nothing more bullish than a stock or index making new all-time highs. The Dow and Transports have made fresh highs, which is a Dow Theory buy signal. As well, the market is benefiting from the combination of strong positive price momentum and skeptical sentiment. The percentage of S&P 500 stocks is above 90% again, which is a characteristic of a “good overbought” market advance (grey bars). 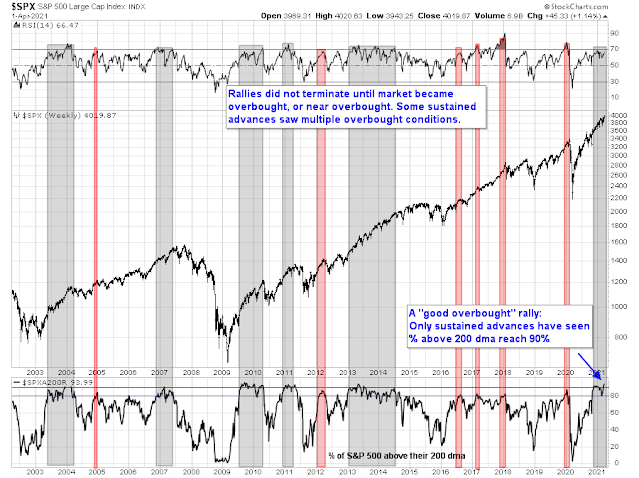 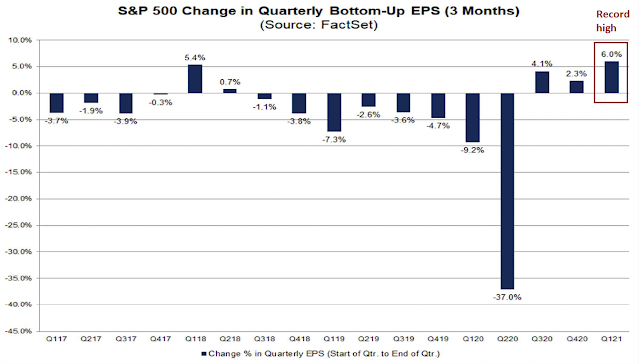 The market is also enjoying a top-down macro tailwind from the blowout March Jobs Report. Non-farm payroll employment soared by 916,000 against an expected 647,000. Average hourly earnings was tame, indicating no pressure from wage inflation. Equally important are the leading indicators of employment. As an example, the number of job leavers, which has historically led NFP, soared indicating growing confidence about the strength of the jobs market.

The bullishness in sentiment surveys is coming off the boil. Investors Intelligence bulls are declining, and so is the bull-bear spread. 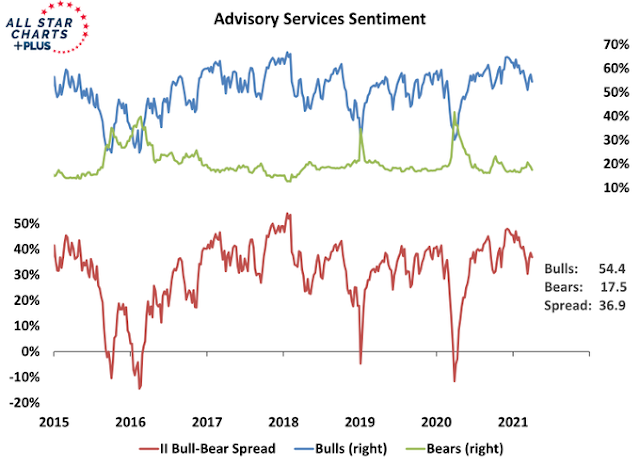 More importantly, the NAAIM Exposure Index, which measures RIA sentiment, retreated to 52 this week. This index fell below its lower Bollinger Band in early March and generated a contrarian buy signal. The current reading is very near the lower BB. If NAAIM sentiment were to deteriorate further next week, it could flash another buy signal. These buy signals have been very effective in the past. 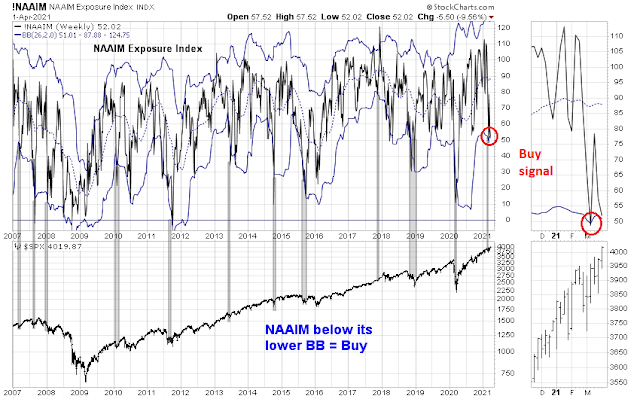 The trend is your friend

In conclusion, investors should heed the adage “the trend is your friend”. The first trend is the pattern of new highs. This is a bull market.
Despite some minor hiccups in factor return patterns, give the benefit of the doubt to the trend of value and cyclical leadership. The Rising Rates ETF (EQRR) represents a simple way of measuring the effects of value and cyclical exposure. Notwithstanding the possibility of a bond market reversal, the intermediate-term value and cyclical trends are still intact. 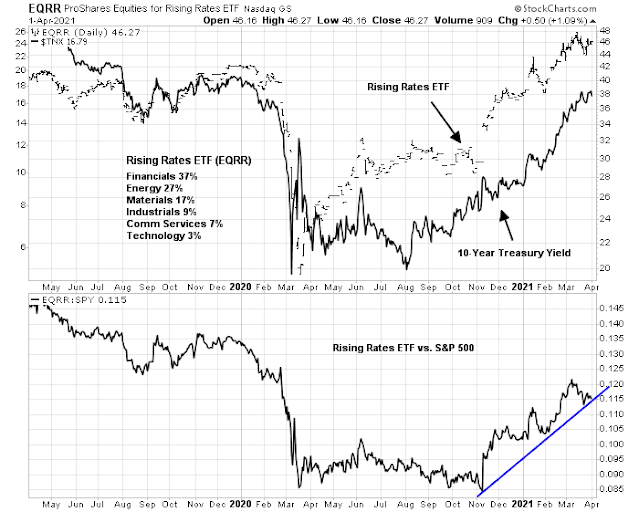 From a trader’s perspective, the reaction of the equity futures market to Friday’s blowout Jobs Report left S&P 500 futures +0.5% and Russell 2000 futures +2.0% on a fair market value basis. In all likelihood, the market will open strongly on Monday. While the S&P 500 did not experience a negative 5-day RSI divergence on Thursday, keep an eye on whether the VIX Index falls below its lower Bollinger Band in the week ahead. Such incidents have often been signals of short-term tops. 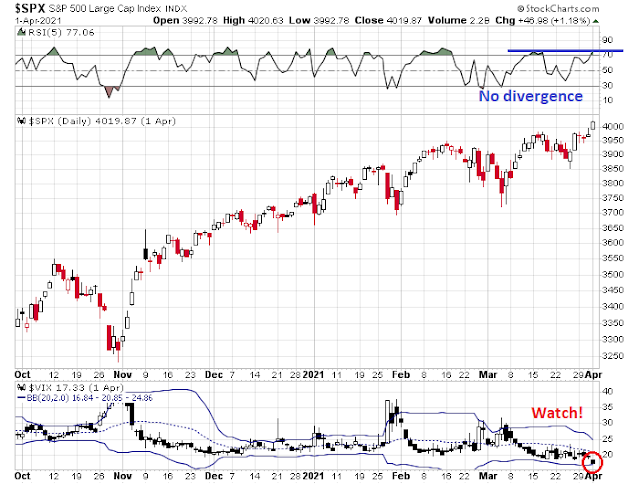 Both my inner investor and inner trader are bullishly positioned. While the market isn’t showing signs of being too extended just yet, my inner trader is watching for signs of excessive exuberance to sell.
Disclosure: Long IJS

21 thoughts on “A change in leadership?”