Will portfolio rebalancing sink equities? – Humble Student of the Markets 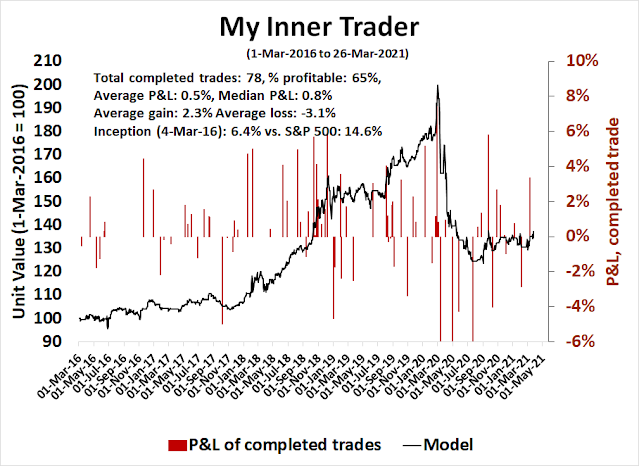 I had a discussion last week with another investment professional about the possible short-term asset price effects of portfolio rebalancing. Equities had handily beaten fixed income investments during the quarter, and balanced fund managers will have to rebalance their portfolios by selling stocks and buying bonds. 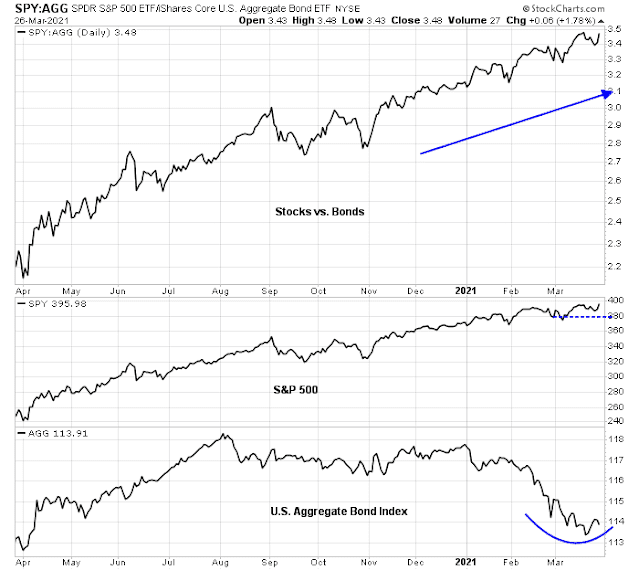 How important is the rebalancing effect? It seems that all the trading desks are talking about it. To add to the confusion, JPMorgan’s derivatives analyst Marko Kolanovic put out a research note stating that “there will be no monthly selling, and indeed there could be buying of equities into month-end. A lack of these flows, and broad anticipation of ‘month/quarter-end’ effect, could result in the market moving higher near term, all else equal.”
What’s the real story?
To answer that question, I conducted an historical simulation to measure the effects of portfolio rebalancing on stock and bond returns. I conclude from this study that fund flow concerns over quarter-end portfolio rebalancing are overblown.

To answer that question, I conducted a simulation to measure the effects of portfolio rebalancing on stock and bond returns.
I formed a portfolio consisting of 60% SPY (S&P 500 ETF) and 40% AGG (US Aggregate Bond Index). Portfolio weights are rebalanced to 60/40 on the last day of the quarter, but allowed to drift during the quarter. All returns used were total returns, which includes dividends and interest distributions. The study period spans the period September 2003 to December 2020.
I measured the possible effects of two rebalancing approaches. The anticipatory approach makes a decision on rebalancing the month-end before quarter-end. The reactionary approach makes the rebalancing decision on the last day of the quarter. In both cases, I measured the returns of SPY and AGG from the decision date.
The following chart shows the median one-month SPY returns based on differing decision rules and further disaggregates each decision by the difference between SPY and AGG weights on the decision date. For example, the light blue bars show the returns when the difference in asset weights were +/- 1% or more, while the darkest blue bars show the returns when the weight differences were +/- 4% or more.
The surprising result from this study was there was little or no anticipatory rebalancing effect. SPY returns were not significantly different regardless of whether the portfolio approached quarter-end with an overweight or underweight equity position. However, there was a significant catchup effect in the following month if the portfolio was underweight equities. Other anticipatory tests using a two and three week lookahead time horizon, whose results are not shown, also displayed similar results of no rebalancing effect. 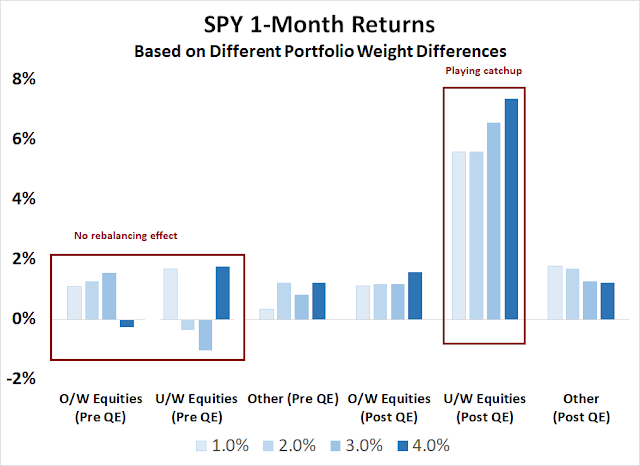 The study also shows that there was no significant rebalancing effect on bond market returns, either before or after quarter-end. Returns weren’t significantly different whether the portfolio was overweight or underweight an asset class. In fact, there was a slight perverse anticipatory effect that bonds outperformed when the portfolio neared quarter-end while underweight equities and overweight bonds. In that case, the normal reaction would be to buy stocks and sell bonds, but bonds showed slightly better returns under those circumstances. 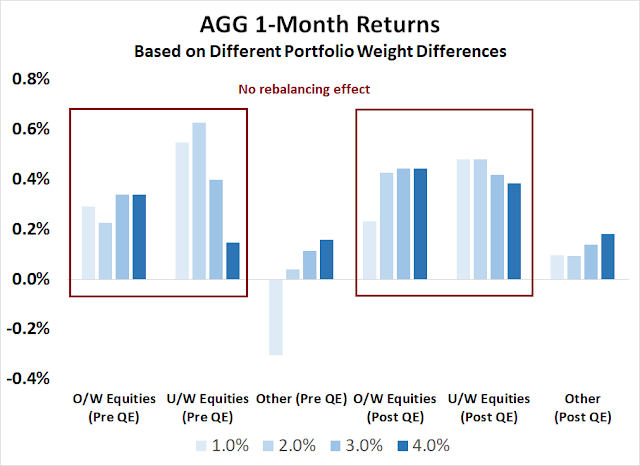 I conclude from this study that fund flow concerns over quarter-end portfolio rebalancing are overblown. Investors need to recognize that institutional portfolios rebalance in two ways, at the discretion of the manager, and at the discretion of the plan sponsor. Managers will only have the discretion to rebalance a portfolio if they have a balanced fund mandate, and balanced fund mandates are usually only given out by relatively small funds. By contrast, a large asset owner such as a pension plan or an endowment fund hires managers based on individual mandates, such as US small-cap equities, venture capital, and international bonds. Each mandate has a very specific benchmark and managers are expected to be fully invested at all times. The large asset owner only rebalances very infrequently, mainly because the owner needs to undergo the unwieldy process of informing some managers that it is redeeming portions of the funds under management and informing other managers it is re-allocating to their funds.
A long-term study of public pension fund allocations shows that their aggregate equity allocations have been on the overweight equities compared to the conventional 60/40 model while fixed-income allocations is mired in the 20-30% range. 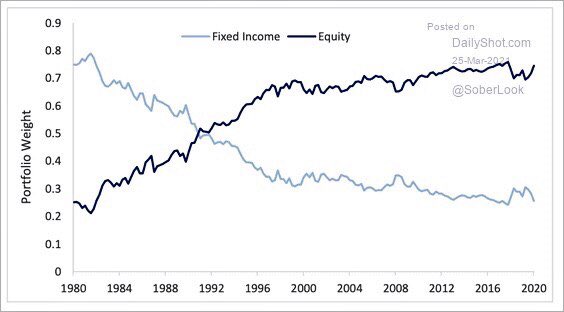 A “Great Ball of Money”

In the meantime, traders and investors have to be aware of what Tracy Alloway at Bloomberg calls a “great ball of money”.

Years ago I wrote that “China’s markets resemble nothing if not a great rolling ball of money that moves from asset class to asset class, constantly searching for the next source of sizable returns.” In a country marked by capital controls, excess liquidity is effectively trapped and forced to ricochet like a pinball in a machine. Skilled investors in China’s markets are able to identify where this money will flow to next, scouring policy statements for hints of government initiatives or for signs that authorities might clamp down on a particular company or market, and watching message boards and the like for retail trends.
There are signs the U.S. is now going down a Chinese-style ball-of-money path too. Sloshing liquidity courtesy of a dovish central bank will probably end up ping-ponging between U.S. assets. While some of it might leak out of the States, viable alternatives to U.S. assets are limited with yields now low around the world (Chinese bonds and stocks are definitely an alternative, but there’s also limited supply for overseas investors). At the same time, investors will probably do well to eye increased government spending and fiscal stimulus for signs of where money might go to next. Money released by the state doesn’t flow evenly to all things and everyone. Pinpointing exactly where it’s going is getting even more important. In this kind of environment, market bubbles don’t necessarily burst so much as roll from one thing to the next.

The “great ball of money” has touched meme stocks, SPACs, and cryptocurrencies. The latest beneficiary appears to be reflation stocks. Compare the technical conditions of the DJIA, which is a proxy for value and cyclical plays, to that of the growth-heavy NASDAQ 100. The DJIA is holding above its 50 dma, while the NASDAQ 100 has been unable to regain its 50 dma. As well, the percentage bullish on point and figure are all significantly better for the DJIA than the NASDAQ 100. 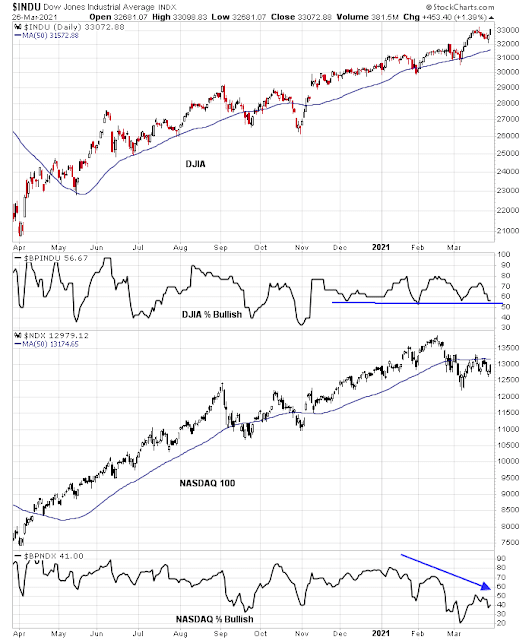 In addition, more value names are entering the price momentum basket. As the following chart shows, median valuations for the high momentum quintile (top 20%) are actually cheaper than median Russell 1000 valuations. This is an unusual condition that hasn’t happened since early 2017. 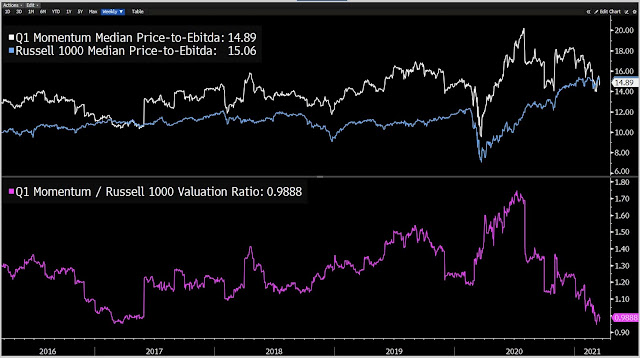 This will create a tailwind for value stocks as momentum players pile into them.

Tactically, the S&P 500 is tracing out an upside breakout from a bull flag within a well-defined uptrend. Value stocks as leaders and growth stocks as laggards. The upside breakout was remarkable in the face of the reported forced large margin liquidation of Tiger Cub Archegos holdings on Friday. The affected stocks were mostly Chinese tech companies such as Baidu, Tencent and Vipshop, though ViacomCBS and Discovery were also hit hard, according to Yahoo Finance.

A liquidation of holdings at several major investment banks with ties to Tiger Cub Archegos Capital Management LLC contributed to an unseen daily decline Friday in shares of stocks including Discovery, Inc. and ViacomCBS Inc., according to people familiar with matter.
Shares of media conglomerate ViacomCBS fell 26% while Discovery dropped 27% Friday, recovering from far steeper losses. The degree of the declines was unprecedented and occurred in an otherwise orderly market.
Early selling came through so-called block trades from Goldman Sachs & Co., which offered over 30 million shares of ViacomCBS in midday trading. Morgan Stanley, earlier in the day, offered over 15 million shares of Discovery, according to people familiar with the matter. 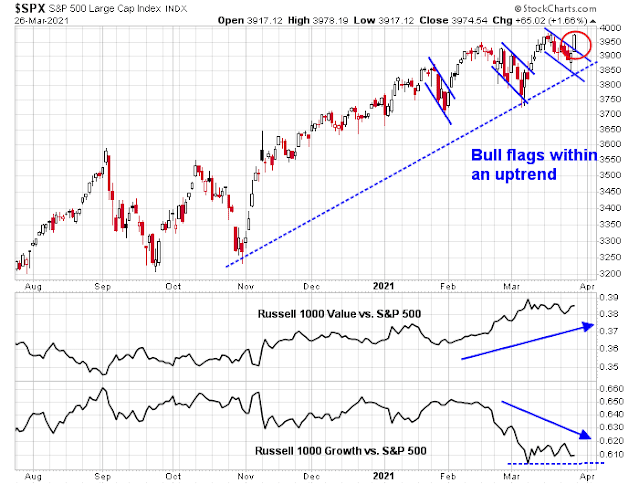 The NYSE McClellan Oscillator (NYMO) bounced off an oversold level last week. Historically, such conditions have been reasonably good signals for market bottoms and possible rallies. 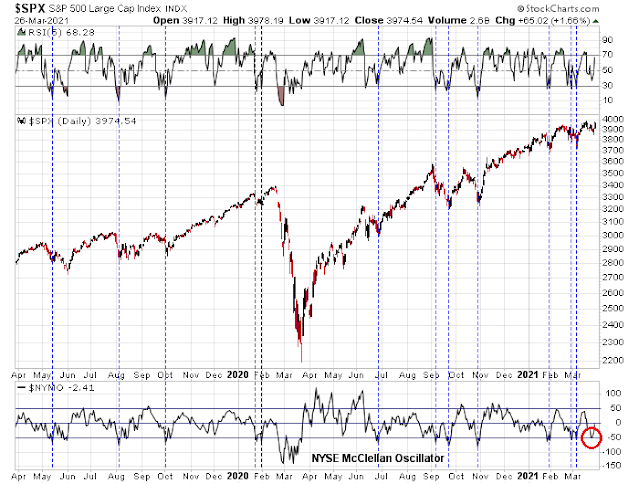 While the market is short-term overbought and 1-2 day outlook probably indicates either a pullback or consolidation, the odds favor higher stock prices in the coming week. 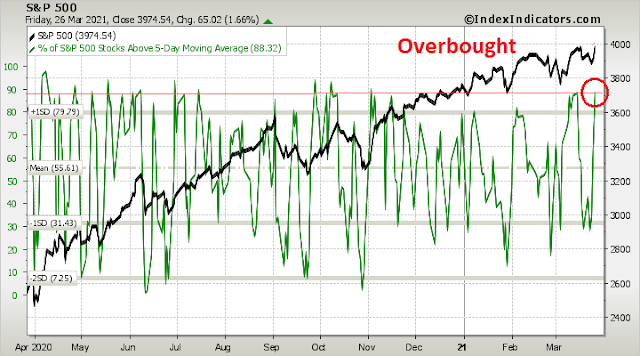