When does Santa’s party end? – Humble Student of the Markets 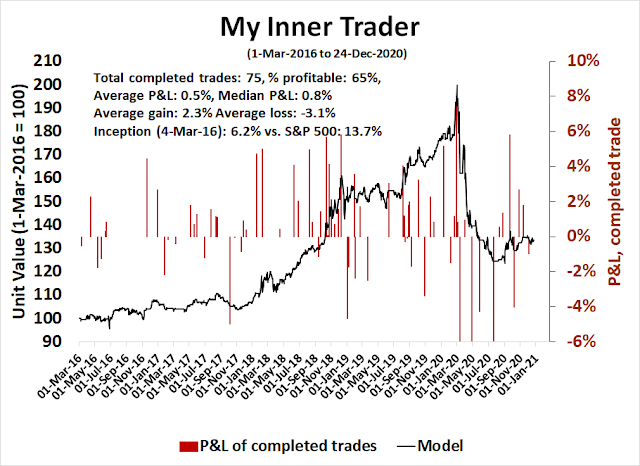 In my last mid-week post, I outlined how the combination of an oversold reading and positive seasonality were combining to provide bullish tailwinds for stocks (see The most wonderful time of the year…). So far, the market is behaving according to the script. The VIX Index retreated after breaching its upper Bollinger Band (BB) last Monday, and the market staged an advance. In light of the narrowness of the BB, traders should watch for a breach of the lower BB, which would be a signal of an overbought market. 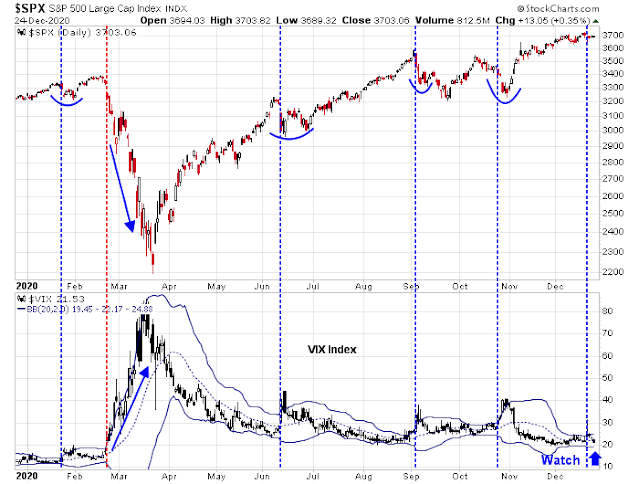 Retired technical analyst Walter Deemer observed that the ratio of NASDAQ volume to NYSE volume had spiked, and it would be a “warning sign in days of yore”. However, similar spikes in the last 13 years have signaled FOMO stampedes and investors chasing beta, rather than actionable sell signals. Arguably, these instances should be interpreted as short-term bullish and not contrarian bearish. 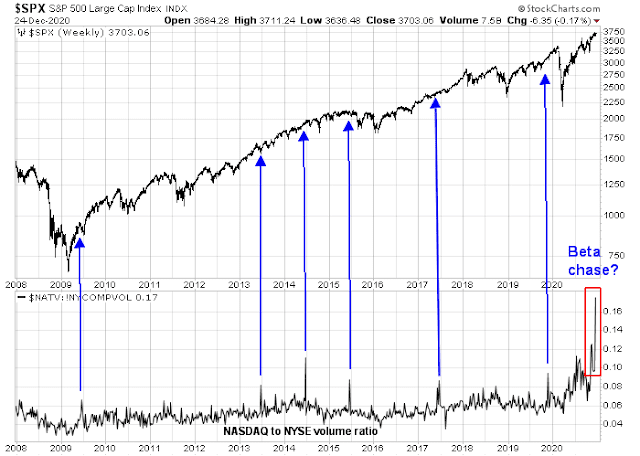 The technical signs indicate that all systems go for the seasonal rally.

Before you get overly excited, bullish traders face a number of key risks. The most immediate threat is President Trump’s threat to veto a $2.3 trillion pandemic aid and spending package approved by Congress, which contains a $892 billion coronavirus relief package and a $1.4 trillion for normal government spending. If the White House and Congress cannot come to an agreement by Monday, then parts of the federal government will have to shut down. The markets would not react well to such an eventuality.
That’s probably an unlikely scenario. Reuters reported that funding for the vaccine rollout depends on the government continuing to operate. Trump would not want his legacy to be marred by a botched vaccine distribution effort, particularly ahead of the upcoming Senate election in Georgia.

The federal government has already purchased 400 million COVID-19 vaccine doses, or enough for 200 million people, from Moderna and Pfizer but needs additional funds to purchase more doses. It also signed contracts with other companies for vaccines that have yet to be authorized. Private companies, including McKesson, UPS and FedEx, are distributing the doses but have been relying on staff in the Department of Defense and the Department of Health and Human Services for support.
States have received $340 million from the U.S. government to help offset costs they’ve borne from the vaccine rollout but say they face a shortfall of around $8 billion. A shutdown would halt plans by Congress to distribute funding to make up for that shortfall.

As well, high-frequency indicators are showing signs of weakness. The Goldman Sachs Current Activity Indicator turned negative in December. The combination of incipient weakness and any hiccup in the delivery of fiscal support could be enough to shift investor psychology. 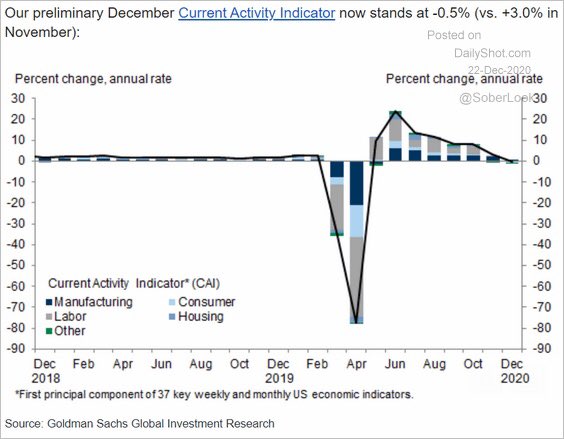 In addition, market internals are flashing warning signs that the Santa Claus rally may be on borrowed time. One of the bearish tripwires I had been monitoring is the performance of the NYSE McClellan Summation Index (NYSI). In the past, NYSI readings of over 1000 were signals of “good overbought” advances, but rallies tended to falter when NYSI began to roll over. NYSI showed definitive signs of weakness last week, which is a warning for the market. 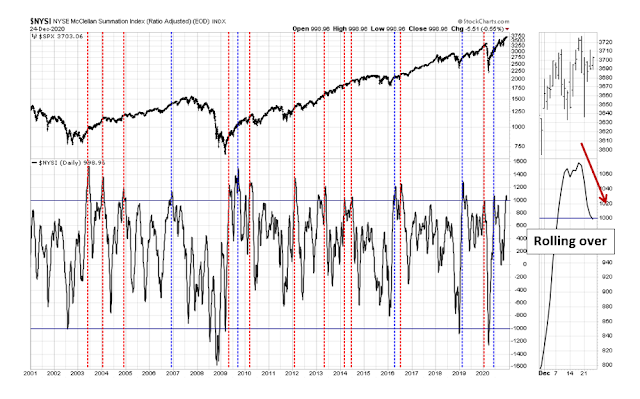 How far can the rally run?

How far can the seasonal strength last, and what’s the upside potential? I offer three estimates, starting from the lowest to the highest.
Jeff Hirsch at Trader’s Almanac defined the Santa Claus rally as the period from Christmas Eve to the second day of the new year. On average, the S&P 500 has gained 1.3% since 1969, which translates to an S&P 500 target of about 3750.
Ironically, I had also been watching the behavior of the quality factor. This indicator recently flashed a warning for the bulls, and the past behavior of the market after such signals also yielded some clues on the length and upside potential of the current rally.
In the past, market melt-ups led by high-quality stocks tended to persist. But when the low quality “junk” starts to fly, it’s a sign of excessive speculation and froth. I measure quality using the QUAL ETF for large-caps, and the ratio of S&P 600 to Russell 2000 for small caps. S&P has a relatively stringent profitability inclusion criteria for its indices, which Russell doesn’t have. (That also explains why it took Tesla so long to enter the S&P 500 despite its sizable market cap – it just wasn’t profitable.) In the past two episodes of a blow-off top, the time lag between the second warning where both large and small-cap quality underperformed to the ultimate top was about two weeks. Based on those projections (warning, n=2), the timing of a tactical top would occur during the first or second week of January with an average gain of 2.5% to 3%, which means an S&P 500 level of about 3800. 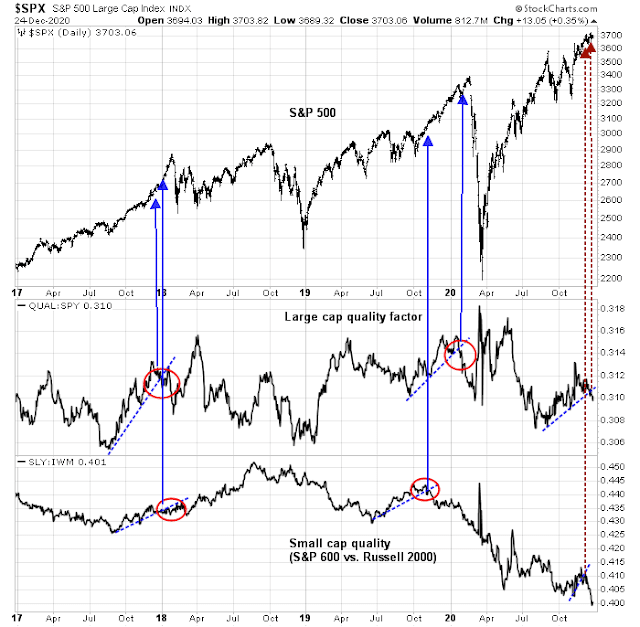 Lastly, Marketwatch reported that Tom DeMark was targeting 3907 during the first week of January.

The bulls shouldn’t panic just yet. The seasonal Santa Claus rally is following the script of a rally into early January, followed by a correction. 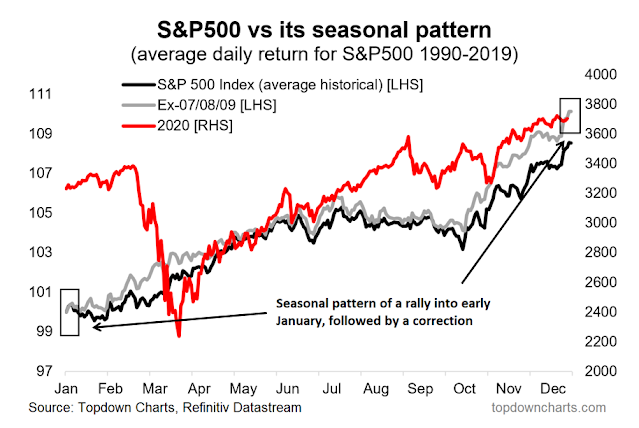 Short-term breadth and momentum readings are not overbought, and the market has more room to rally. 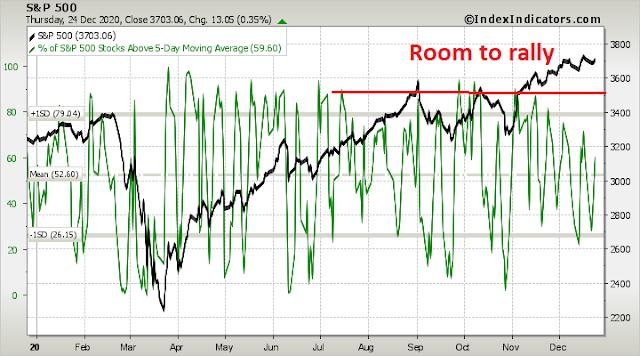 The percentage of S&P 500 at 5-day lows are more oversold than overbought, which is indicative of more upside potential. 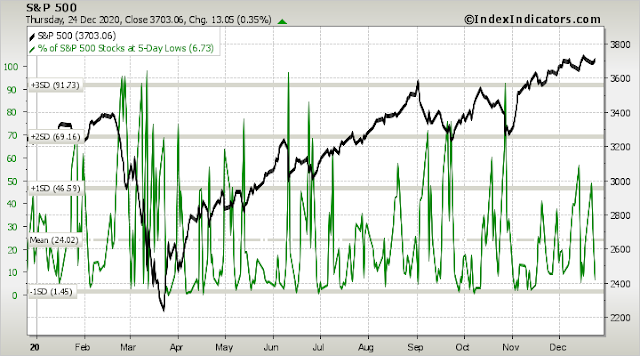 However, the challenge for the bulls is to overcome the trend of lower highs in breadth and momentum. 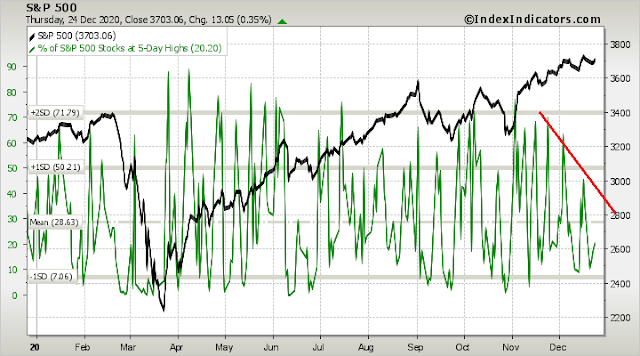 My inner investor remains bullishly positioned. Even though the market may experience a pullback in January, the intermediate-term trend is bullish (see Debunking the Buffett Indicator) and he isn’t overly concerned about minor blips in the market. The near-simultaneous upside breakouts by the Dow and the Transports flashed a Dow Theory buy signal. The primary trend is up, though short-term corrections are not out of the question. 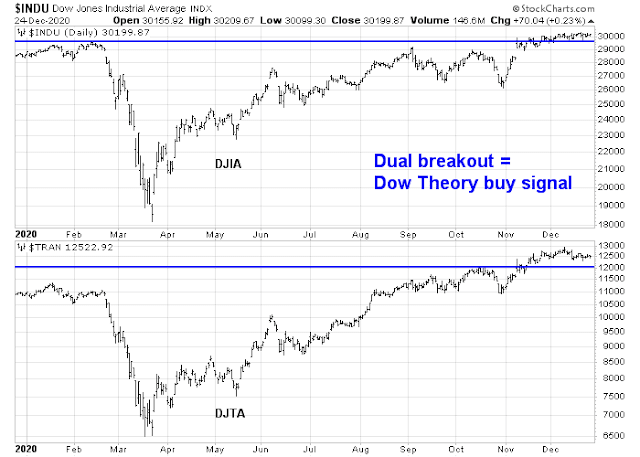 My inner trader is also long the market. If it all goes according to plan, he will be taking profits in early January and contemplate reversing to the short side at that time. All of the technical projections cite the first or second week of January as the likely peak of the current period of market strength. Upside S&P 500 potential vary from a low of 3750 to a high of 3907. What follows would be a 5-10% correction.

21 thoughts on “When does Santa’s party end?”