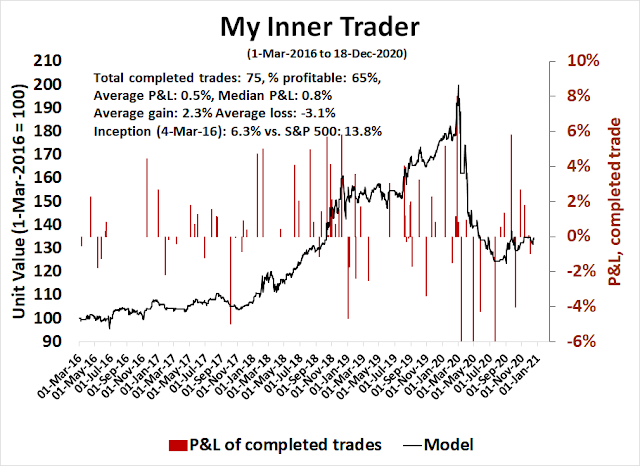 Is Santa coming to town? Historical studies have documented that seasonal strength usually starts about mid-December and continues into January. 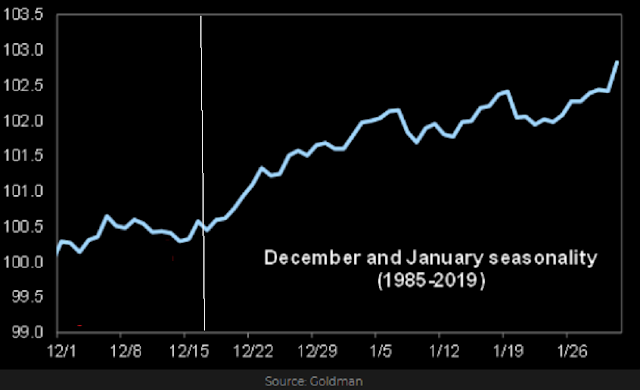 Right on cue, the S&P 500 staged an upside breakout to a fresh all-time high last Thursday, though it pulled back Friday and the breakout held, though just barely.

How to play the Santa rally

How should traders position for seasonal strength? The most straightforward way is to stay long the equity market. Global breadth is surging, and history has shown that to be intermediate-term bullish. 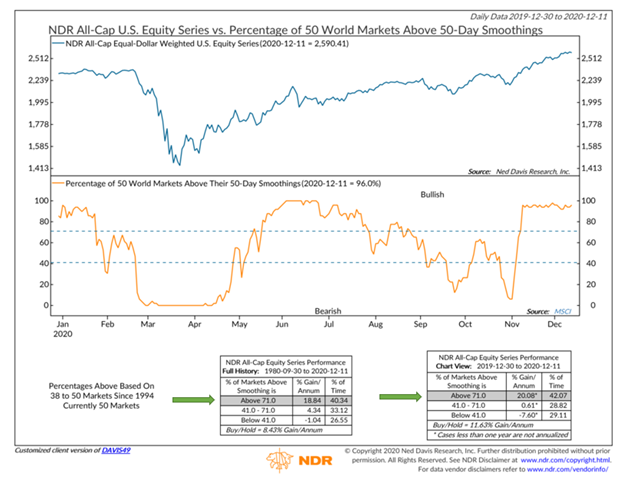 Georgia on my mind

The market could see an additional boost from the Georgia senate elections, scheduled for January 5, 2021. Currently, the Republicans hold a 50-48 seat edge, and the Democrats need to win both Georgia races to win control, as Vice-President Harris would cast the tie breaking vote in case of a deadlock.
According to Strategas, the vast majority of institutional investors expect the Republicans to retain control. 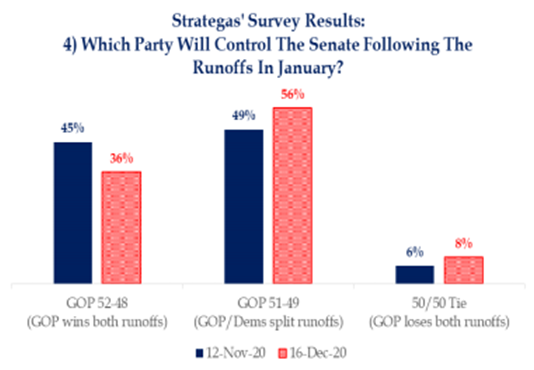 Over at the PredictIt betting markets, the market is giving a 70% chance that the Republicans will retain control. Individual odds on the Georgia senate election vary between 60-65%. In practice, they may be thought of as a single race since the voting is expected to be correlated with the other. 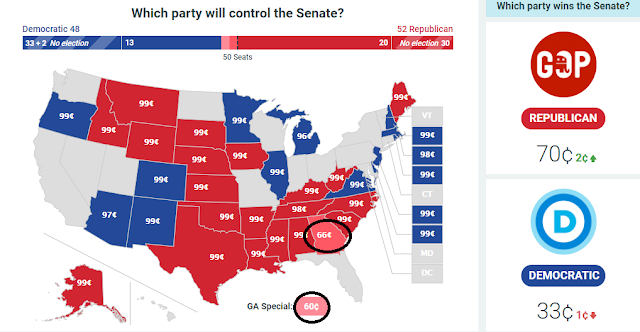 FiveThirtyEight’s compilation of polling averages show that the competing candidates are neck-and-neck and within a hair of each other. It wouldn’t take much of a swing for the Democrats to win both races. 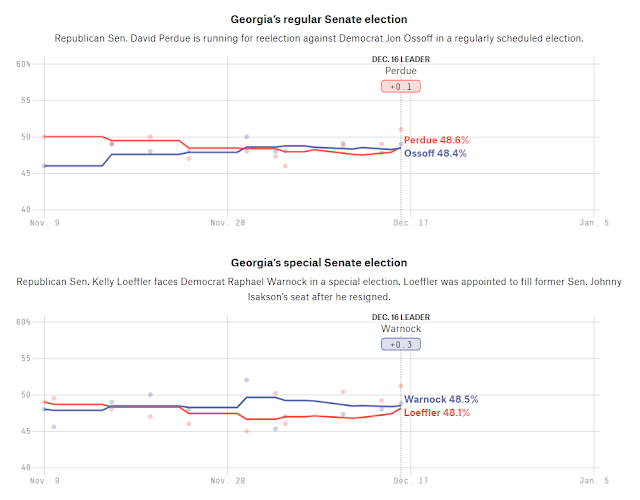 A Democratic win would be interpreted as a somewhat unexpected positive surprise for the markets. Democratic control of all legislative branches of government would translate to a large stimulus bill much in the shape of the $3 trillion package passed by the House.

How far can a Santa Claus rally run? Marketwatch reported that technical analyst Tom DeMark has an S&P 500 target of 3907 two weeks from now.

Ask Tom DeMark how confident he is about his most recent equity-market timing call and he will imply that it is almost a no-brainer from his perspective.
“I’ve been stubborn and obstinate about 3,907 since November,” DeMark told MarketWatch in an exclusive phone interview Thursday morning.

However, he thinks that the January peak will represent the high for the first half of 2021.

But there is a catch to that late-year equity surge. The technical analyst says that it is likely to represent a top for stocks and estimates that the S&P 500 in the first half of 2021 is likely to decline by 5% to 11%, based on his models and the natural tendencies of assets in a downtrend.

A point and figure chart of the hourly S&P 500 indicates an upside objective of 3939. DeMark’s 3907 target is certainly within that ballpark. 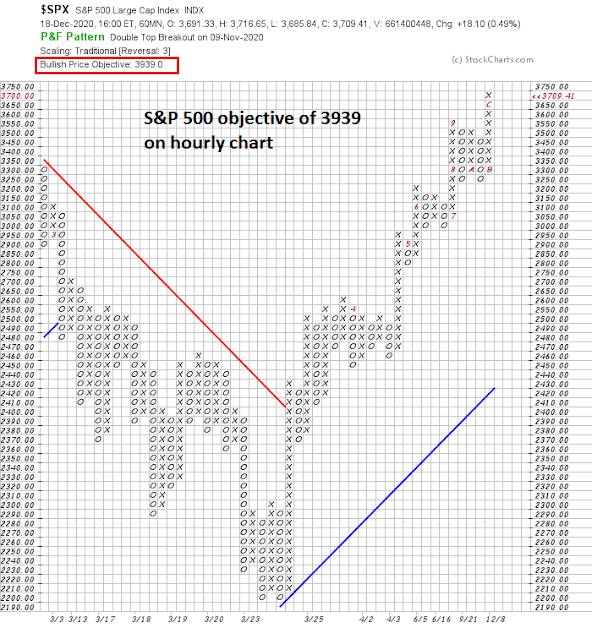 Having established that the odds favor a Santa Claus rally, the issue of outperforming the rally is a little bit trickier. Here are some clues from history. I made a study of the price momentum factor during this period. There are several ways of measuring momentum, the two longest existing momentum ETFs are MTUM and PDP. I analyzed whether MTUM or PDP outperformed the S&P 500 over differing time horizons, starting from December 15. As the chart below shows, there is little or no price momentum or reversal effect 10 trading days (or approximately until year-end) and 15 trading days (first week of January) after December 15. However, momentum begins to assert itself after the first week, and continues to beat the market until the 30 trading days (end of January). 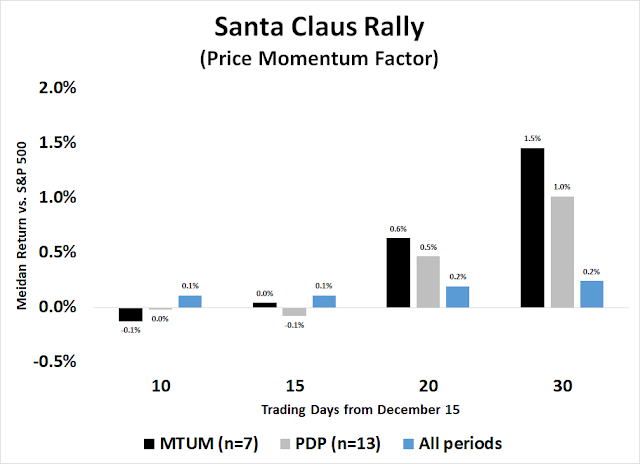 What about small caps? The return pattern is very different than price momentum. The Russell 2000 has tended to beat the S&P 500 into year-end, but reversed itself in January. 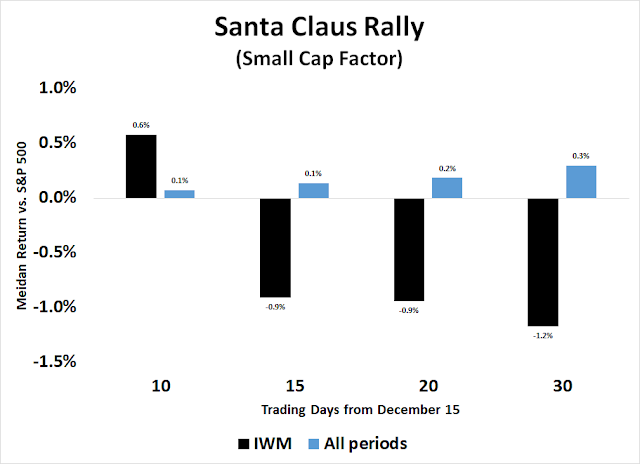 A word of caution is in order for traders thinking about jumping on the small cap bandwagon in 2020. The Russell 2000 has doubled since the March bottom.

Analysis from SentimenTrader showed that sudden surges in the Russell 2000 off a major low have resolved themselves with a period of correction and consolidation. 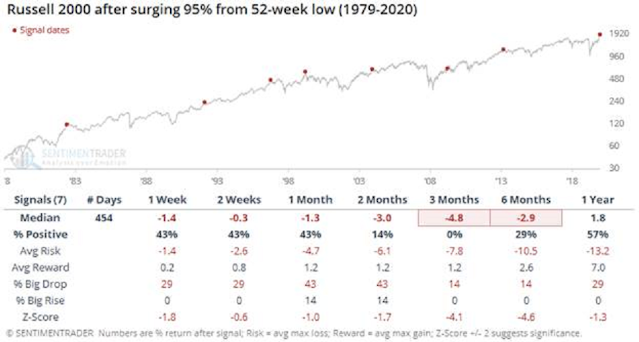 Trying to beat the market during a Santa Claus rally is at best a guessing game. In the spirit of the season, the following picture epitomizes the trader’s dilemma. Is this a simple nativity scene, or a picture of two T-Rexes? 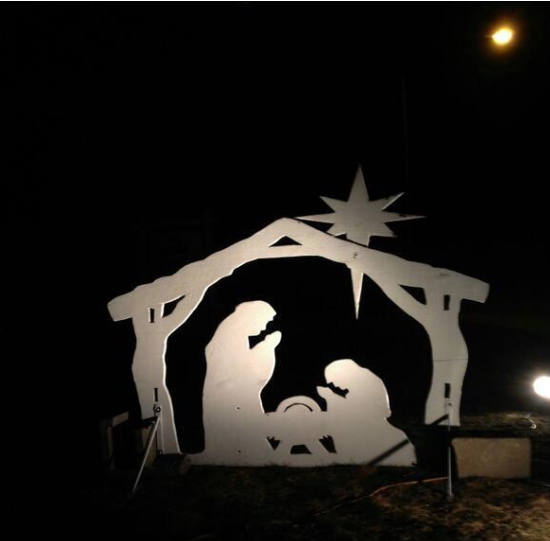