Interpreting the market’s election reaction – Humble Student of the Markets

Mid-week market update: It’s always instructive to see how the market reacts to the news. If I had told you that the dual market nightmare scenarios of a contested election and a deadlocked election consisting of a Biden Presidency and a Republican-controlled Senate were to come true, would you expect the market to take a risk-on or risk-off tone?

Based on publicly available reports, Biden is on his way to the White House. If he were to win all the states that he is leading in, Biden would win the Presidency. As well, the Republicans have retained control of the Senate, which puts the idea of a Blue Wave sweep to rest. That said, the presidential election is very close and subject to challenge. The likelihood of a contested election that winds up in the courts, and the streets, is high. 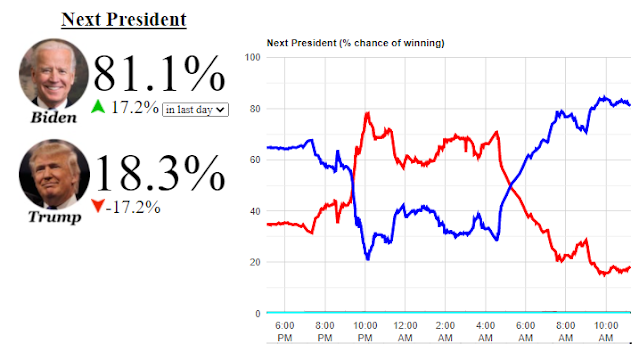 In the face of all this uncertainty, the S&P 500 melted up to regain its 50 dma.

Market strength in the face of bad news is bullish, but there were some blemishes beneath the surface.

Let’s start with the good news. The back-to-back 80%+ upside-to-downside volume on Monday and Tuesday negated the 90% down day from last week, according to Lowry’s. This has to be regarded as a positive development for the bulls. In addition, we have a potential Zweig Breadth Thrust, where the market recycles from an oversold extreme to an overbought condition in 10 trading days. Last Thursday was day 1, and the market has until next Wednesday to achieve the ZBT buy signal. 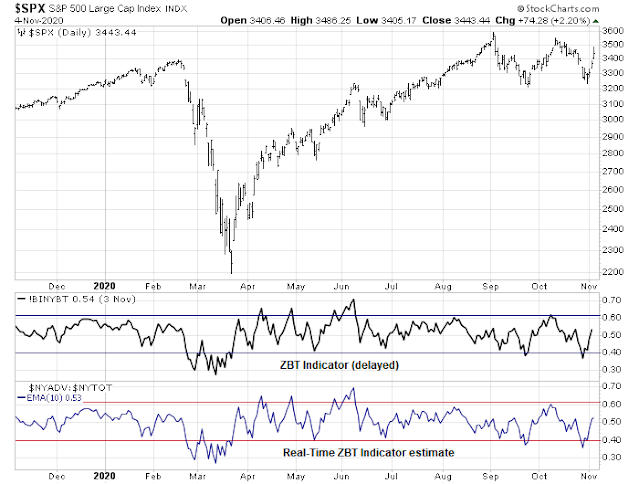 ZBT buy signals are extremely rare. The last one occurred in January 2019, and it was extremely successful (see A rare “what’s my credit card limit” buy signal).

On the other hand, short-term market internals is raising cautionary flags. Today’s rally was led by large-cap Big Tech stocks. The NYSE Advance-Decline ratio was only 1.3 to 1, and small-cap Russell 2000 was only up 0.0%, compared to 2.2% for the S&P 500.

Longer-term, I have concerns about the health of the bull. New bull markets are usually characterized by changes in leadership. The Big Three leadership themes have been US over international stocks, growth over value, and large caps over small caps. As the chart below shows, only small caps have rallied through a declining trend line, indicating a possible change. While US stocks have been largely flat against global stocks, their relative uptrend is intact. The same could be said about the growth and value relationship, whose trend was tested recently but growth remains dominant. 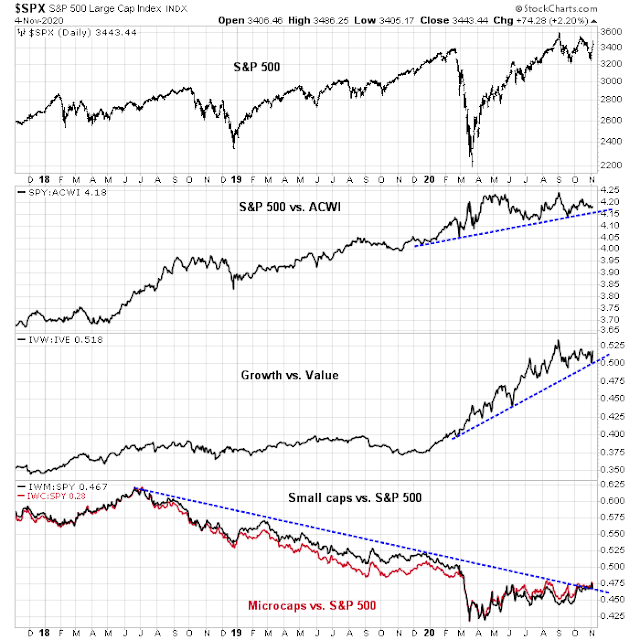 Notwithstanding a possible ZBT buy signal, I find it hard to call this the start of a new bull without a definitive signal of changes in market leadership.