What’s on the calendar this week? Did you forget?

Oh yeah, there’s an FOMC meeting this week, and there’s the November Jobs Report on Friday. While not much policy change is expected from the Fed this week, Barron’s has already anointed Jerome Powell as “the winner”. (Has anyone started to call him the Maestro yet?) 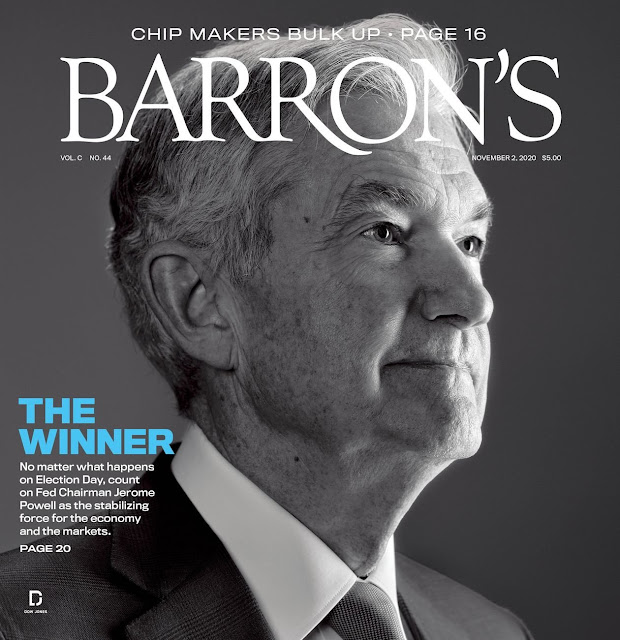 Before everyone gets too excited, here are the challenges facing the Fed in the post-electoral and pandemic era.

Former New York Fed President Bill Dudley penned a Bloomberg Opinion article declaring that the Fed really is running out of firepower. He concluded that while the Fed can still take some steps to ease monetary policy, they won’t be very effective and it’s time for fiscal policy to take up the baton.

No doubt, Fed officials should still commit to using all their tools to the fullest. But they should also make it abundantly clear that monetary policy can provide only limited additional support to the economy. It’s up to legislators and the White House to give the economy what it needs — and right now, that means considerably greater fiscal stimulus.

With rates at the zero lower bound (ZLB), the Fed’s principal tools are forward guidance and quantitative easing. There is a limit to forward guidance because of its asymmetric nature. The Fed has made it clear it won’t raise rates until certain employment and inflation targets are hit.
Notwithstanding the ambiguity about the nature of the targets, the only effect forward guidance will have is the shape of the yield curve. Supposing that the economy turns south again. With the Fed’s commitment to hold rates down, the yield curve adjusts by flattening, and assumptions about the timing of the next rate hike are pushed forward. In that sense, that’s all forward guidance can do. The existing policy doesn’t get any easier, the market is just left with the expectations of an extended easier policy.

To be sure, the Fed can engage in unconventional monetary policy in the form of quantitative easing. But QE also has its limits. As the ECB and BOJ found, the central bank can end up owning a substantial portion of outstanding government debt, and central bankers can only stimulate by going out further on the risk curve by buying MBS, corporate bonds, and stocks.

Dudley and other Fed speakers are right. Fiscal policy is the most effective form of stimulus at this point.

Reacting to a recovery

Sure, the Fed has said it is targeting an “average inflation rate” of 2%, indicating it is willing to tolerate some overshoot of reported inflation. In that case, it runs the risk of allowing inflationary expectations to run out of control, and become unanchored. Even as the economy emerges from the recession, we are already seeing signs of cyclical rebound in growth and inflationary expectations. Gold prices have pulled back and consolidating just below its breakout level. Inflationary expectations (RINF) have staged an upside breakout from a declining trend line. As well, the copper/gold ratio, which is an important cyclical indicator, is turning up, though it has not broken out of its downtrend to signal a liftoff. 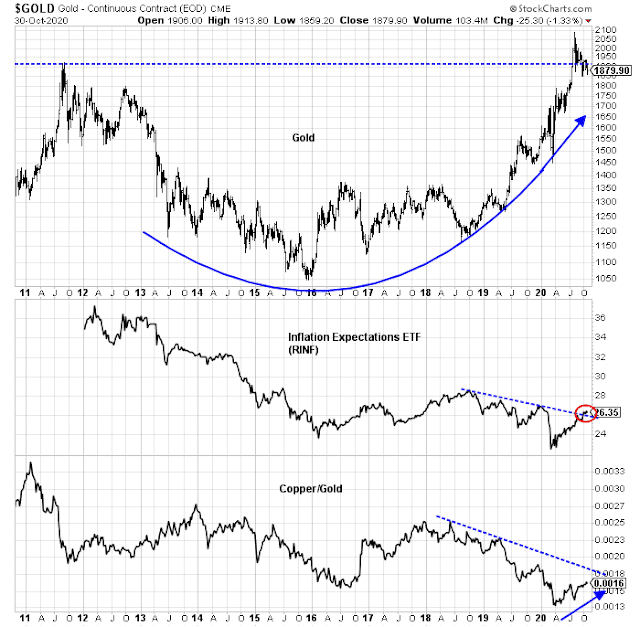 Let’s put on some rose-colored glasses and consider what might happen under a bullish scenario. The election results in a government that enacts a significant stimulus package. In the next 4-6 weeks several Phase 3 vaccine trials will report, and one or more of them are positive enough to see widespread vaccine availability by late Q1 or Q2. The global economy takes off. Already, 81% of global manufacturing PMIs are in expansion. 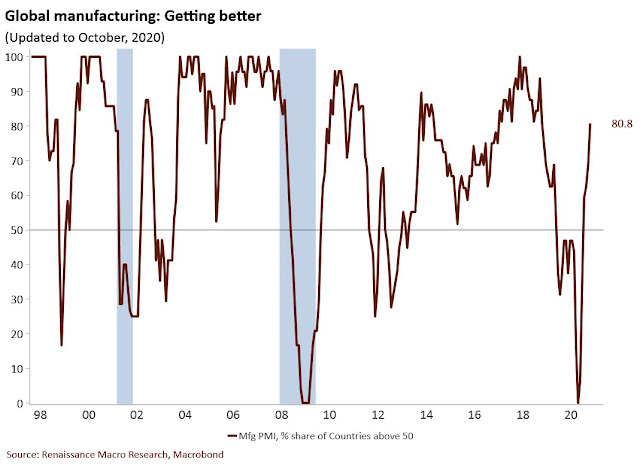 The bottom-up view is the same. The latest update from The Transcript, which monitors earnings reports, tells an upbeat story of an economic recovery.

Most parts of the economy have normalized and the economic winners are booming.  Technology, cloud service and e-commerce are leading the way and other industries are surging as well.  Financial service firms focused on M&A advisory, trading and restructuring are seeing strong business.  The housing market is also on fire with new home sales up 32% y/y.  This week’s election and a renewed wave of COVID could dampen activity, but for now, the economy is doing remarkably well.  COVID may have led to structurally higher productivity.

All this begs questions about the Fed’s reaction function.

All very good questions for the Fed chair in his press conference.