Out of the woods? – Humble Student of the Markets

Mid-week market update: As President Trump left the hospital and returned to the White House, the message from his doctors was he was doing fine, but he was not “out of the woods”. Numerous outside physicians have made the point that COVID-19 is nothing like the flu. Flu symptoms hit the patient and eventually dissipate and go away. COVID-19 patients often have ups and downs in their infection. They may feel fine, but symptoms flare, dissipate, and return. The process can last weeks, even months. Just because Trump reported feels fine now doesn’t mean that he won’t feel fine by this weekend.

Just like Trump’s COVID-19 infection, neither the equity bulls nor bears are out of the woods. Yesterday (Tuesday), Fed Chair Jerome Powell said in a speech that it was time to go big on fiscal stimulus:

The expansion is still far from complete. At this early stage, I would argue that the risks of policy intervention are still asymmetric. Too little support would lead to a weak recovery, creating unnecessary hardship for households and businesses. Over time, household insolvencies and business bankruptcies would rise, harming the productive capacity of the economy, and holding back wage growth. By contrast, the risks of overdoing it seem, for now, to be smaller. Even if policy actions ultimately prove to be greater than needed, they will not go to waste. The recovery will be stronger and move faster if monetary policy and fiscal policy continue to work side by side to provide support to the economy until it is clearly out of the woods.

The September FOMC minutes indicated a consensus that fiscal support is forthcoming, and the economy could tank without a rescue package.

Trump tanked the market by tweeting that he was calling off the negotiations for a stimulus package. While he did tweet later that he was in favor of a standalone bill for a $1200 stimulus payment, his chief of staff Mark Meadows confirmed today that stimulus bill negotiations are dead. 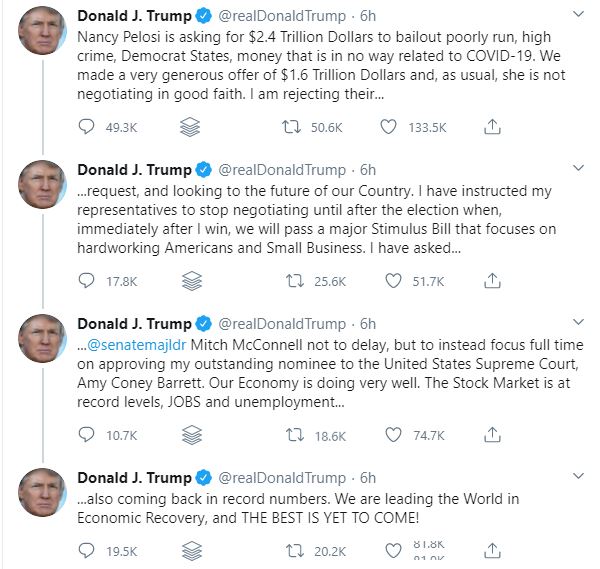 Recovery not out of the woods

Trump’s political pivot to spending his political capital to confirm Judge Barrett to the Supreme Court means that, in all likelihood, there will be no stimulus package passed until February, which is after Inauguration Day and the new Congress is seated.
Joe Wiesenthal at Bloomberg observed that the recovery in employment isn’t out of the woods either. He pointed out the recovery in jobs that employees can work from home (WFH) have plateaued, and likened these high paying jobs as a “longer-term bet on future business prospects” and “being akin to a capital investment”.

Looking further under the hood of the labor market reveals some other concerning signs. Jed Kolko, chief economist at at the job site Indeed, has been regularly tracking job openings by sector throughout this crisis. It’s notable which sectors are bouncing back, and which ones remain depressed. In areas like retail and construction, which temporarily were forced to shut down in the spring, positions continue to rapidly open up. But in areas such as banking, finance, and software development, job openings remain extremely depressed.
The split makes sense. A software development job isn’t the type of thing you just post one day because a business reopens after a lockdown. It represents some kind of longer-term bet on future business prospects. You can think of a software hire as as being akin to a capital investment. As such, this should raise some concerns about economic productivity going forward, if companies are spending less on long-term investment and projects now. 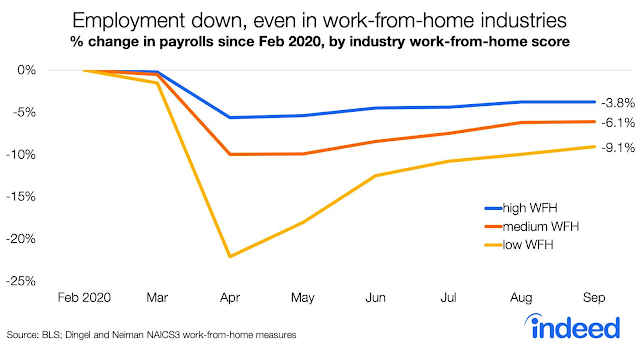 The delay in additional stimulus until February, at the earliest, could have a devastating impact on the economy.

In the meantime, the stock market remains range-bound. The S&P 500 is overbought and testing overhead resistance while stuck in a narrow range. This kind of sideways consolidation pattern is not unusual in light of the the index violation of a rising trend line in early September. I am still waiting for either an upside breakout or downside breakdown.

A House report calling for antitrust investigation of Big Tech was not helpful to large cap NASDAQ 100 stocks either. This index is also testing overhead resistance, while at the same time its relative return is testing a key rising trend line. 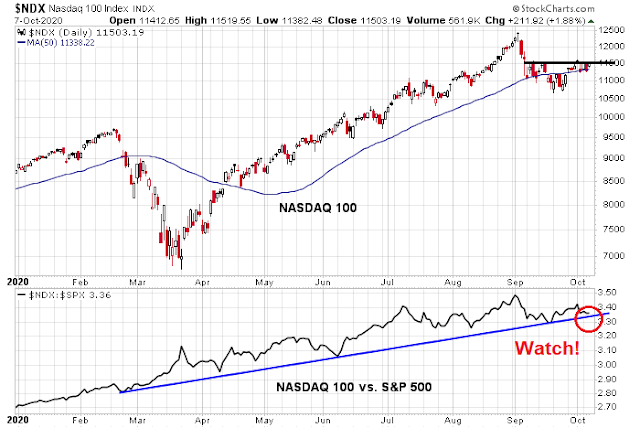 The market was on the verge of a Zweig Breadth Thrust buy signal yesterday (Tuesday) until Trump’s tweet tanked the market. There is still a glimmer of hope for the bulls, as the last day of the ZBT window is tomorrow (Thursday). 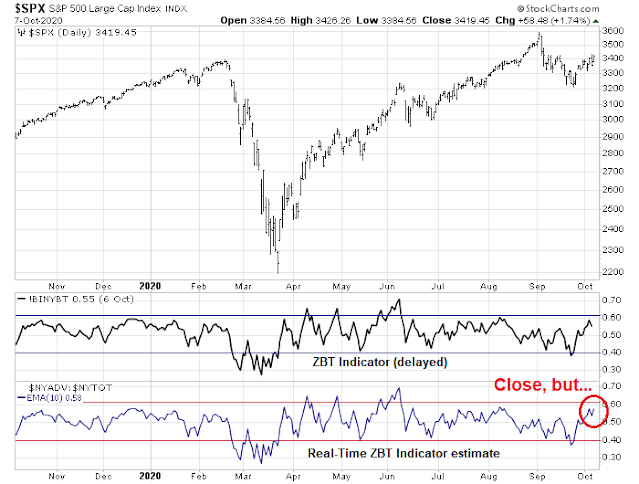 The bears can point to continuing low short interest levels, which will not put a floor on the market should it weaken. 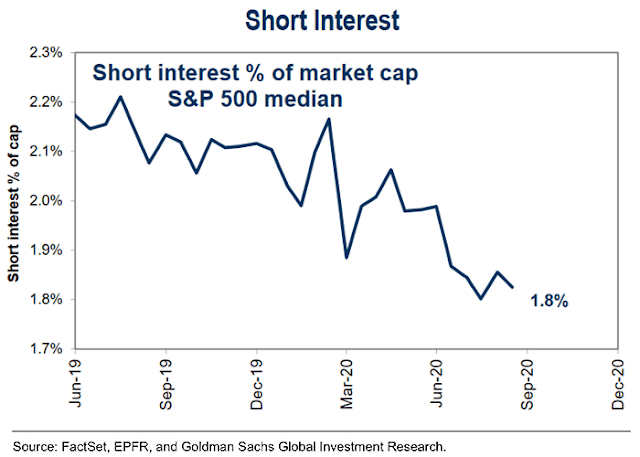 Investors should brace for more choppiness and volatility. The latest update of option implied volatility is telling the same story of election anxiety. Implied volatility spikes in early November, and remains elevated until mid-December. The market is still anxious about the prospect of a contested election and post-electoral uncertainty. 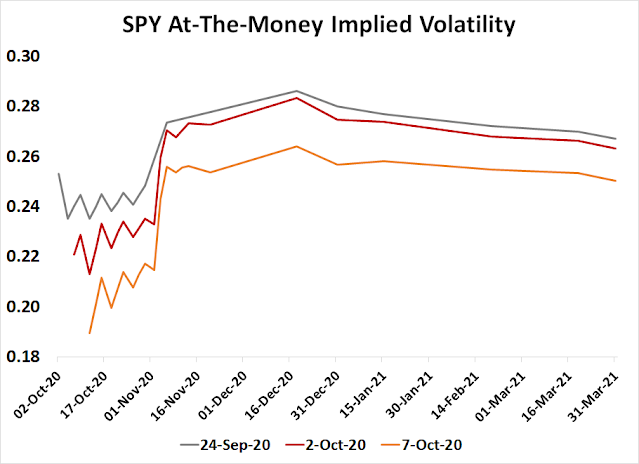 While I am not fond of historical analogs, but this one opens the door to a test of the March lows in the near term.