The more things change… – Humble Student of the Markets 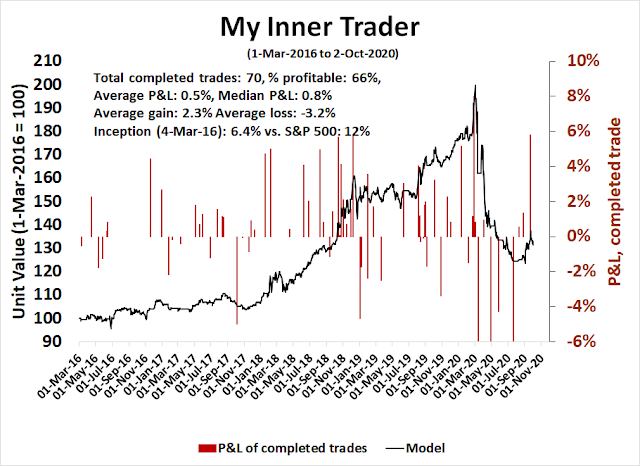 The market was subjected to an unexpected shock late Thursday when President Trump announced that he had been diagnosed with a COVID-19 infection. What was unusual was the behavior of many market internals – they stayed the same.
Plus ça change, plus c’est la même chose. The more things change, the more they stay the same.
In light of this development, Trump is forced to quarantine and his campaign activities are suspended or curtailed. This creates a headwind for his electoral chances about a month ahead of the election. The betting odds on a Trump victory fell in the betting markets, but the overall Republican odds of a victory was steady as the odds on the Pence contract rose. Plus ça change, plus c’est la même chose.
Equally puzzling was the behavior of risk. Prior to the news, the option market was discounting heightened odds of a disputed election. Average option implied volatility (IV) spiked just ahead of the November 3 election, and they remained elevated until mid-December. The shape of the implied volatility curve stayed the same after the news. Plus ça change, plus c’est la même chose. 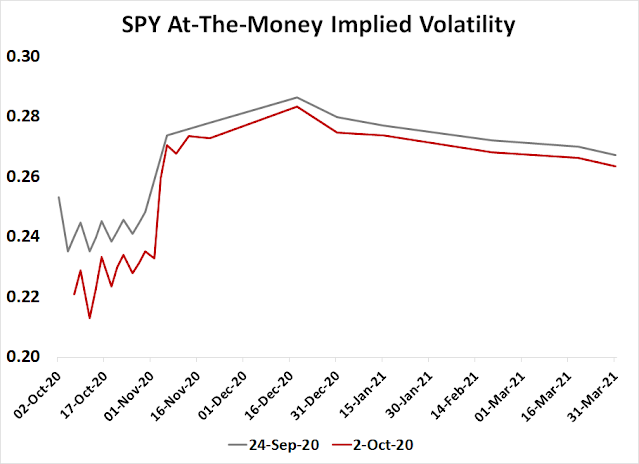 The technical behavior of the market was also relatively steady. Both the S&P 500 and NASDAQ 100 rallied last week and regained their respective 50 day moving average (dma) levels. Both indices remained range-bound for the week, bounded by a band of upside resistance and downside support. 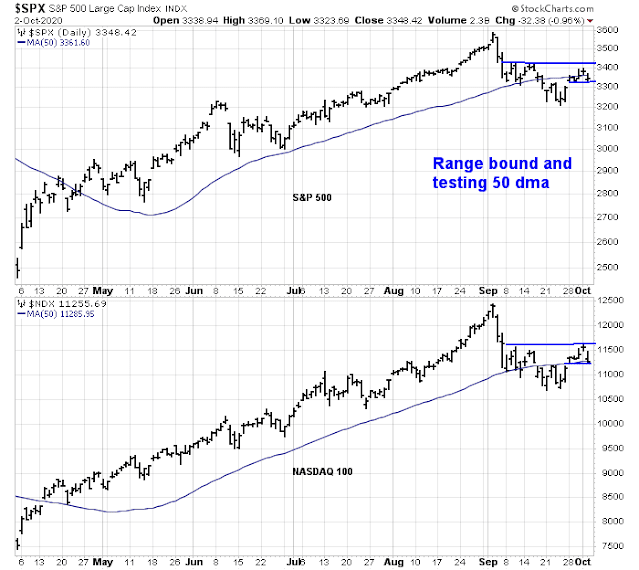 A shift in sentiment 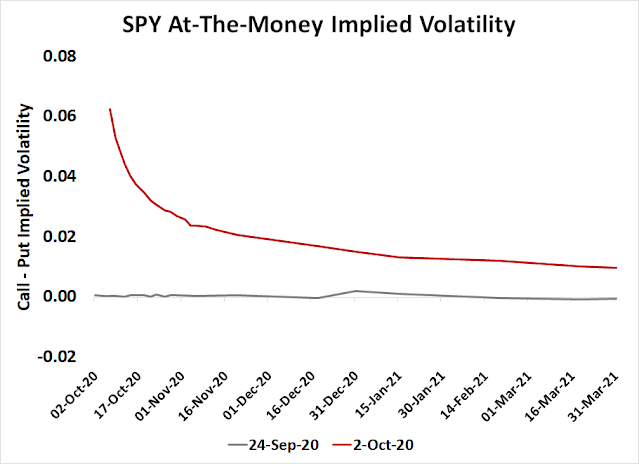 Does anyone remember the crowded short by large speculators in equity futures that everyone got excited about? SentimenTrader observed that the latest update shows that about two-thirds of the position was bought back last week. 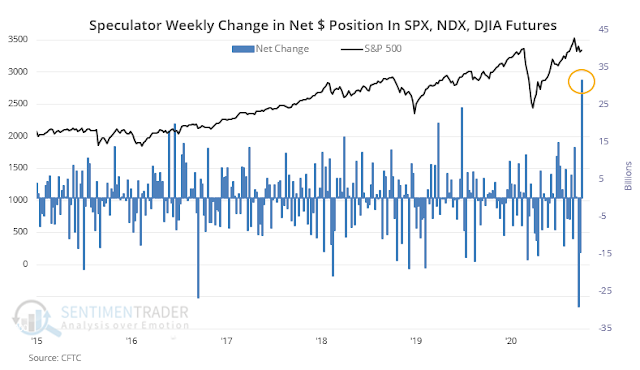 Large speculators are still net short the NASDAQ 100 futures contract, but their exposure has been substantially reduced. 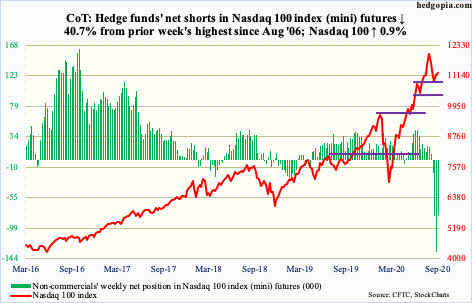 Looking to the week ahead, the market is retreating from an overbought condition. Barring any more unexpected surprises, equities should continue weaken in the early part of the week. 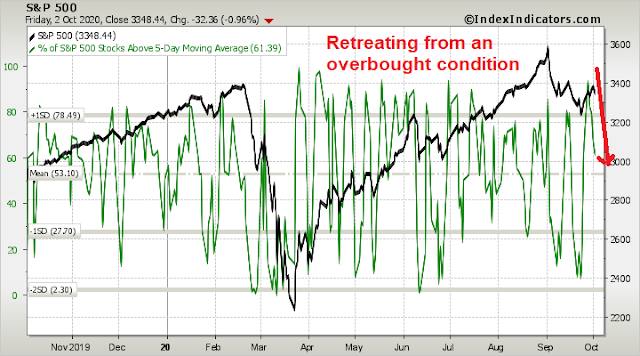 Tactically, both the S&P 500 and NASDAQ 100 are exhibiting price gaps begging to be filled on the hourly chart. While anything can happen, the aforementioned price differential between call and put options is contrarian bearish – at least in the short-term. 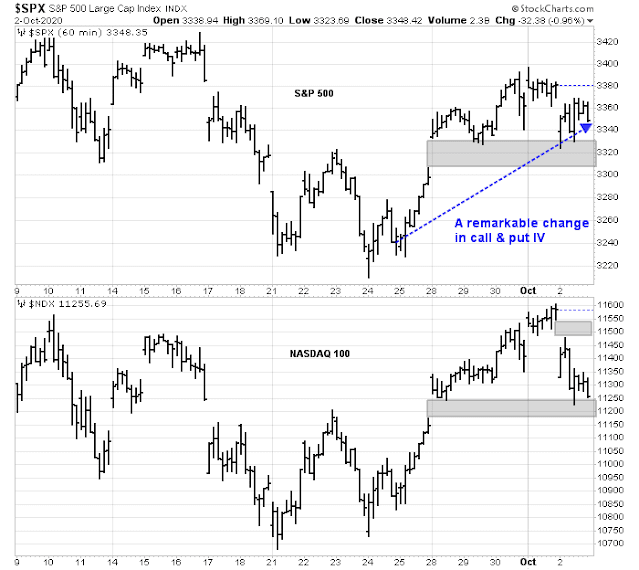 The two wildcards to my forecast are the ongoing negotiations between House Speaker Nancy Pelosi and Treasury Secretary Steve Mnuchin over a stimulus package, and how Trump,s diagnosis affects his ability to govern and campaign.
Pelosi’s negotiation intentions are unclear. Why are they even discussing a standalone airline relief bill, or any relief bill? I find it difficult to believe that it is to the Democrats’ advantage to pass any stimulus package at all. Trump and the Republicans appear to be on the ropes in the polls. The Democrat controlled House already passed a $2.2 trillion HEROS 2.0 Act last week, knowing full well that it would not be given assent in the Republican controlled Senate. The Democratic strategy was for lawmakers to return to the districts and campaign on the premise that they tried their best and blame the Republicans. There is little political incentive for Pelosi to work towards a compromise bill, which would benefit the Republicans if passed. Even if she could come to an agreement with Mnuchin, it is unclear whether the Republicans have the votes to pass such a bill in the Senate. Moreover, the Senate is going on hiatus until October 19 because of a COVID-19 outbreak. Why even make the effort at all? Regardless, a comprehensive rescue package would be a huge bullish surprise.
The other risk is President Trump’s prognosis, which could throw his electoral chances into further turmoil. Bob Wachter, the Chair of UCSF Medicine, gave a sobering analysis of Trump’s condition in a Twitter thread.

Now we’re down a bad loop of the algorithm: not only with symptoms, but symptoms (such as shortness of breath or cough) or signs (such as low oxygen) bad enough that his docs think he needs to be in the hospital. They wouldn’t do that if he only had a fever & muscle aches…

… It might mean he’s now sleepy or confused (25th Amendment!), or, more likely, short of breath, cough &/or low oxygen level, indicating lung involvement. Yes, the threshold to hospitalize the president is probably lower than for average person, but still – it’s not good.

And that it occurred the day after his first symptoms – whereas patients are often stable for 3-10 days before crashing – is worrisome.

The odds on the chart…are for all comers, not necessarily high-risk patients like Trump. At this point, his risk of death is >10%.

Trump’s symptoms puts him in one of the first two phases of COVID-19 treatment as depicted in the chart below. While he may only be in the first phase and the hospitalization decision is because of his position in the government, he is more likely in the second phase. Patients often show few symptoms when first afflicted, and their condition can deteriorate quickly soon afterwards. UK Prime Minister Boris Johnson was hospitalized as “a precautionary measure”. He went into ICU the next day and eventually came close to death. Even if everything goes well, expect Trump to be sidelined for a minimum of 10-14 days, which is a critical window for his election campaign. Can the Republicans make sufficient adjustments in light of the fact that both Trump’s campaign manager Bill Stepien and the RNC Chair Ronna McDaniel have been diagnosed with COVID-19? 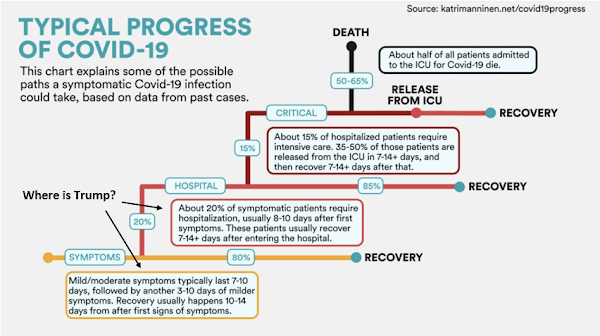 My outlook remains unchanged from last week. My base case scenario calls for near-term volatility and choppiness until the election, with a bearish bias.
Plus ça change, plus c’est la même chose.
Disclosure: Long SPXU

42 thoughts on “The more things change…”