Waiting for the July Jobs Report – Humble Student of the Markets

Mid-week market update: The July Employment Report has the potential to be a game changer in how the market perceives the recovery. Estimates of job gains are all over the place, and the median stands at 1.5 million. 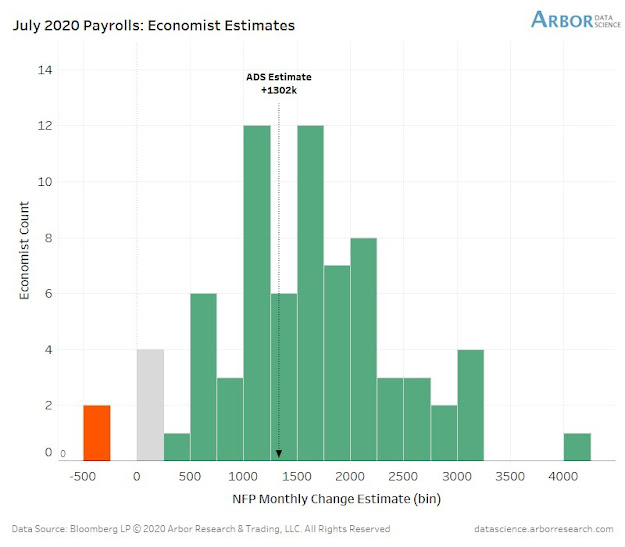 High frequency economic data has been weakening, and I am inclined to taken the “under” consensus on the print. This could be a big negative surprise for the market and spark a risk-off episode.

There is a flood of high frequency data that suggests a soft Nonfarm Payroll (NFP) report. Much of the gains in employment in recent reports are attributable to the return from furlough of low-wage service workers. A new study and poll of over 6,400 US respondents shows that workers previously laid off and re-hired are being laid off again.

Small businesses are highly sensitive economic barometers because of their low bargaining power. Homebase indicates that small business employment has flattened out. If we align the Homebase data to the Job Report reporting dates, it suggests a job gain of about 1.5 million, which is with the consensus forecast. 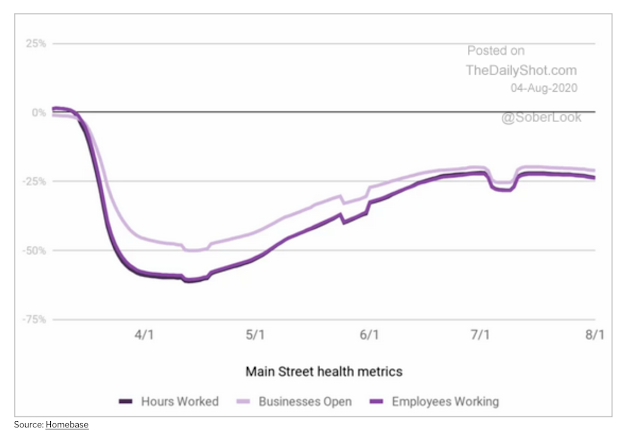 Using high frequency Census data, former Treasury official Ernie Tedeschi estimated the NFP print to be a loss of -2.2 to -4.7 million jobs, which would be a huge negative shock. 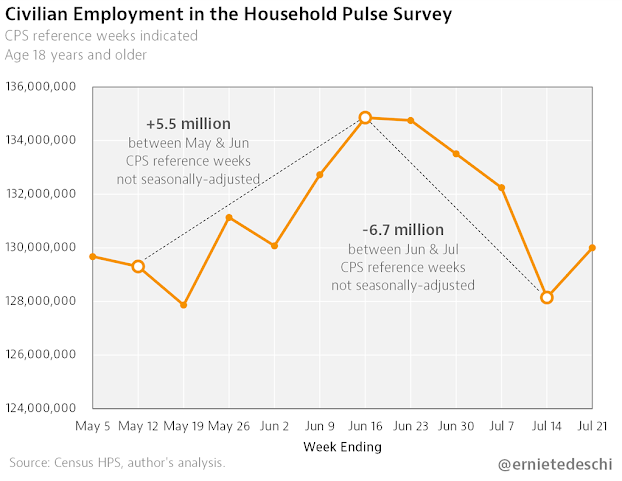 The ADP report of private sector jobs came in at 167K, which is well below the consensus of 1.5 million jobs. However, the ADP data can be a noisy preview of the NFP report.  I conclude that the risk to the NFP report asymmetrically skewed to the downside, and a big negative print is not out of the question.

The other uncertainty that overhangs the market is the negotiations between Democrats and Republicans over a second stimulus package. There is a soft deadline Friday as the Senate is scheduled to recess on that day. The House is already in recess. However, lawmakers can be recalled to pass a bill with 24 hours notice.
There are some signs of progress, but both sides are reportedly far apart on some key issues. As 15-20 Republican Senators will not approve any further aid, the White House is dependent on the support of a substantial number of Democratic Senators to pass legislation. This gives the Democrats a strong bargaining position. Bloomberg reports that some of the major contentious points are the Democrats’ insistence on state and local government aid, and the Republicans’ desire for liability protection for employers.
The rescue package negotiations of 2020 have become the Sino-American trade negotiations of 2019. I find it hard to believe that Trump would cave to Democratic demands and a humiliating legislative defeat less than 100 days ahead of an election, but I have been wrong on these forecasts before. Bear in mind that even if there is a deal, some precious time has been lost and the aim of new legislation will be to extract the survivors that fell into the fiscal canyon, rather than preventing people from falling off the fiscal cliff. It is unclear the level of damage done to the economy until we know the nature of the rescue package.

The market’s reaction to the current economic outlook has been mixed. The risk-on rally from the March lows is largely attributable to the expectations of a V-shaped recovery, not just in the US but globally. One useful cyclical indicator is the copper/gold ratio, which has closely tracked the 10-year Treasury yield. These two indicators have diverged recently. The copper/gold ratio rose, and then fell. The reversal can be partly explained by the strength in gold prices. At the same time, the 10-year Treasury yield fell to all-time lows, which is a risk-off signal. Which is right? 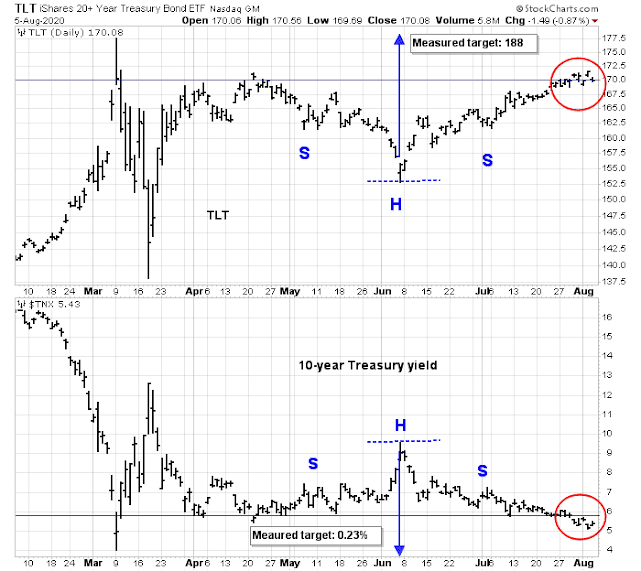 As I pointed out before, the SPX appears to be tracing an Elliot Wave diagonal triangle, which is an ending pattern. As well, the higher highs are not being confirmed from a momentum or breadth perspective. 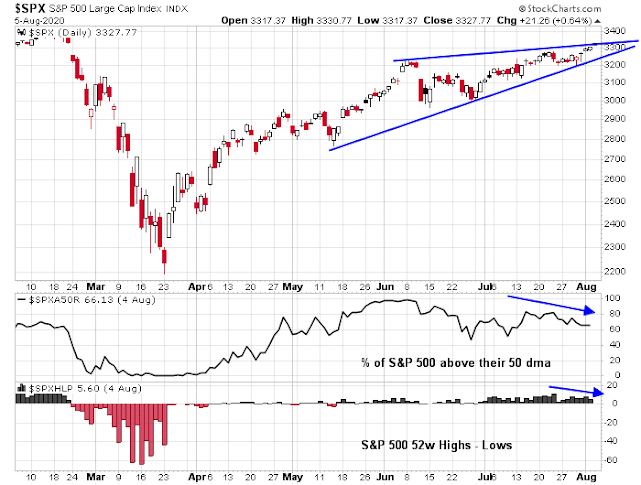 The NASDAQ 100, which have been the market leadership, has staged an upside breakout through resistance. 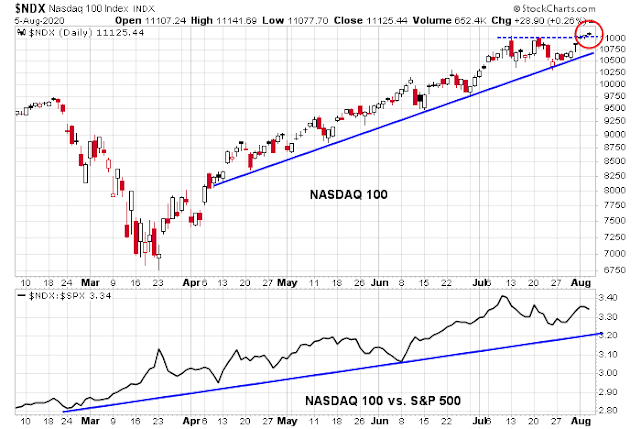 We could see some real fireworks this Friday from both the NFP report and the soft deadline of CARES Act 2.0 negotiations.

79 thoughts on “Waiting for the July Jobs Report”