Waiting for the inflection point – Humble Student of the Markets 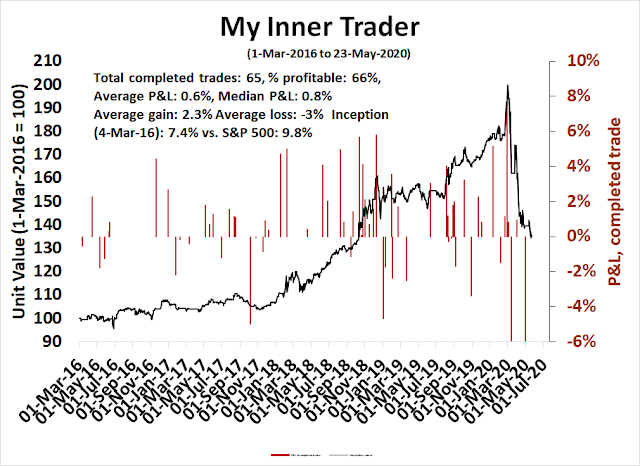 Don’t count on the Fed

There is a belief among the bullish contingent that Fed intervention can solve everything that’s wrong with the stock market. While liquidity injection can boost equity prices, they do not represent a permanent solution. Otherwise, the Japanese and European markets would have been the clear leaders in the past decade. 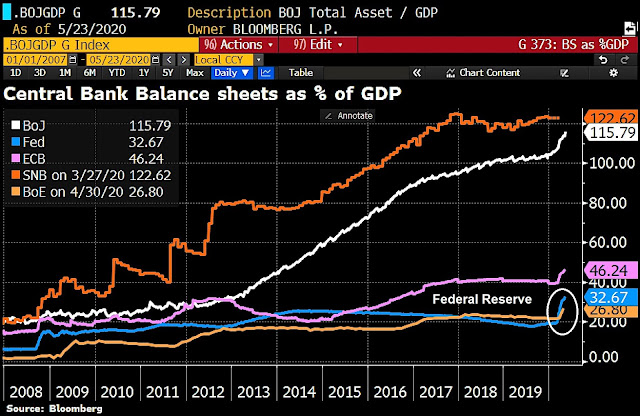 Instead, the recent surge in stock prices has created a mini-bubble which is at risk of bursting.

I have written about the sudden surge in small investor trading that has been supporting this advance. Linette Lopez at Business Insider called a “perfect storm of stupid”.

A much shared chart shows that the trading activity at discount broker Robinhood has rocketed upwards. 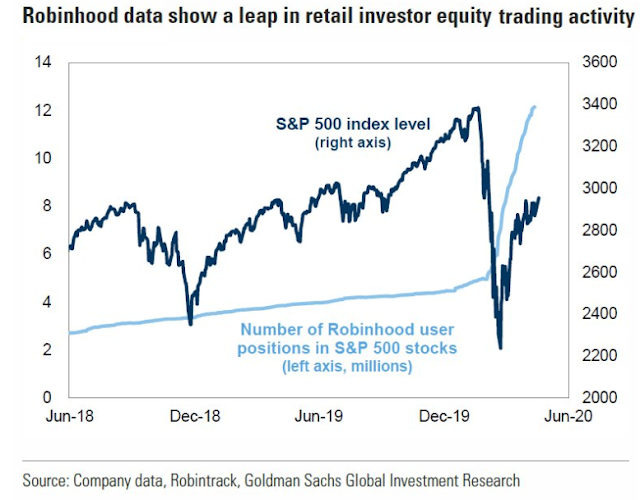 CNBC reported that consumers used much of their stimulus payments to trade the stock market.

Securities trading was among the most common uses for the government stimulus checks in nearly every income bracket, according to software and data aggregation company Envestnet Yodlee. For many consumers, trading was the second or third most common use for the funds, behind only increasing savings and cash withdrawals, the data showed.

Yodlee tracked spending habits of Americans starting in early March and found that behaviors diverged around mid-April — when the checks were sent — between those that received the stimulus and those that didn’t. Individuals that received a check increased spending by 81% from the week prior, and data show some of the spending went to buying stocks.

People earning between $35,000 and $75,000 annually increased stock trading by 90% more than the prior week after receiving their stimulus check, data show. Americans earning $100,000 to $150,000 annually increased trading 82% and those earnings more than $150,000 traded about 50% more often. “Securities trading” encompasses the buying and sells of stocks, ETFs or moving a 401k. 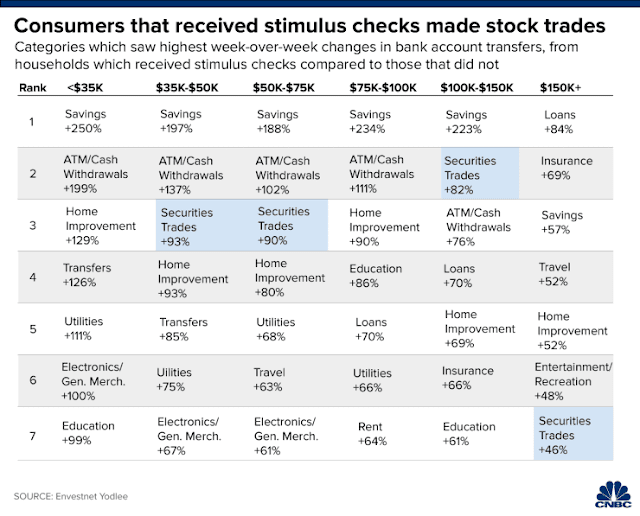 Jason Goepfert at SentimenTrader recently issued his own warnings of sentiment extremes. First, the stampede into growth and technology is as overbought as 1980, 1999, and 2015. All of these episodes ended badly soon afterwards. 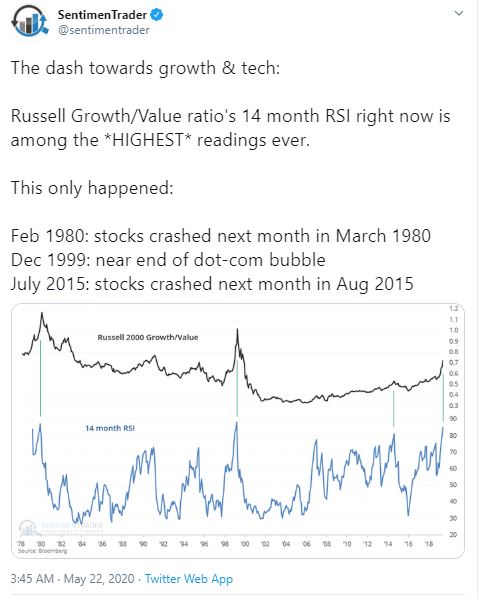 That warning was addressed not only at the small investors dabbling in the FANG+ names, but institutional investors too. The latest BAML Global Fund Manager Survey revealed that global institutions were underweight stocks, but they compensated by overweight high beta sectors like technology and communication services (GOOGL, NFLX).

From a tactical perspective, Goepfert also observed that the stock market is likely to staging a volatility breakout. Past breakouts have tended to resolve themselves in a bearish manner.

The S&P 500 has been stuck in a range for a month, above its medium-term 50-day moving average but below its long-term 200-day average. Based on other long streaks of being stuck between time frames, there has been a higher likelihood it will break the streak by falling below its 50-day average. But future returns were weak, no matter which way it broke.

He also issued a warning based on volume behavior. 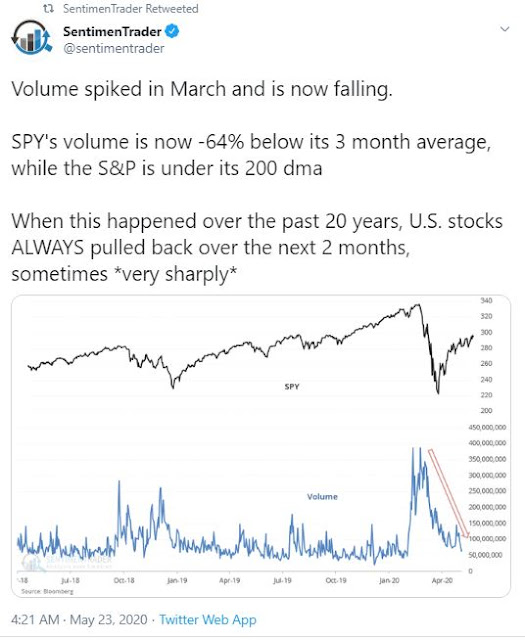 How much gas is there left in the tank?

How much gas is there left in the bulls’ tank? Traditional sentiment models are unhelpful. AAII weekly sentiment has is retreated to neutral from a crowded short condition. 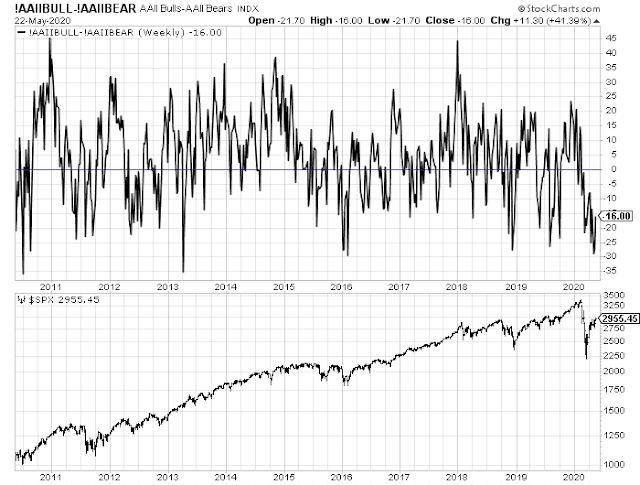 Same with the NAAIM Exposure Index, which measures the sentiment of RIAs. 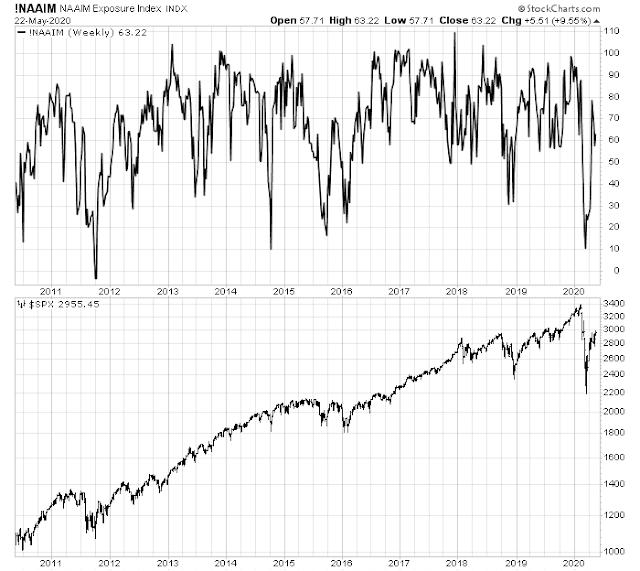 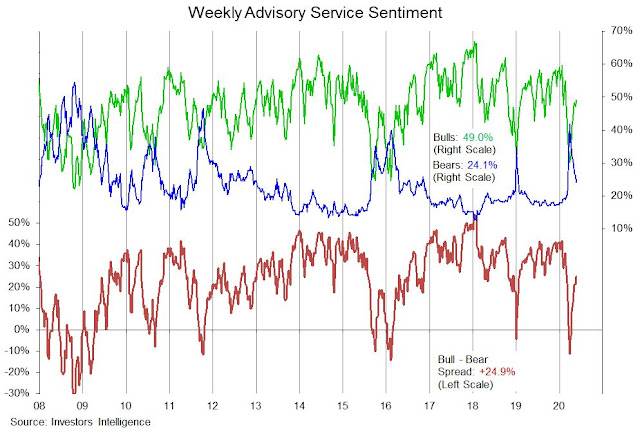 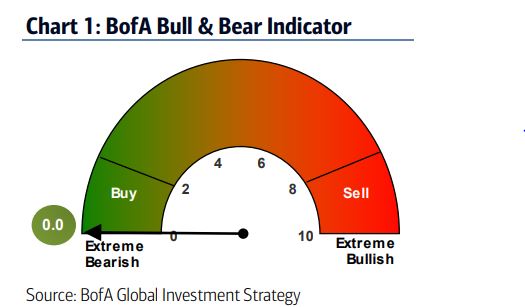 On the other hand, the Citi Panic-Euphoria Model pushed further into euphoric territory this week.

Someone is going to be wildly incorrect and have egg on his face.

Looking to the week ahead, the market still appears to be range-bound. The possibility exists that the S&P 500 could strengthen further to test its 200 dma at about 3000, but that only represents an upside potential of 1.5%. Different versions of the advance-decline lines remain in uptrends. Until those trend lines are broken, the bears cannot be said to have seized control of the tape. 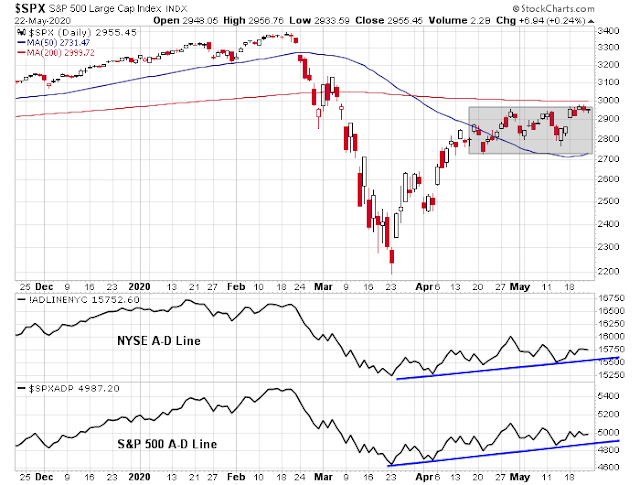 The week starts with a slight bearish bias. Short-term breadth is falling, and momentum is negative, but readings are neutral and the market could turn up from here. 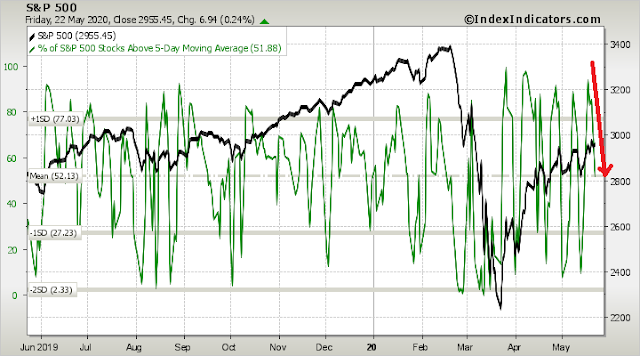 Longer term breadth is recycling off an overbought condition. 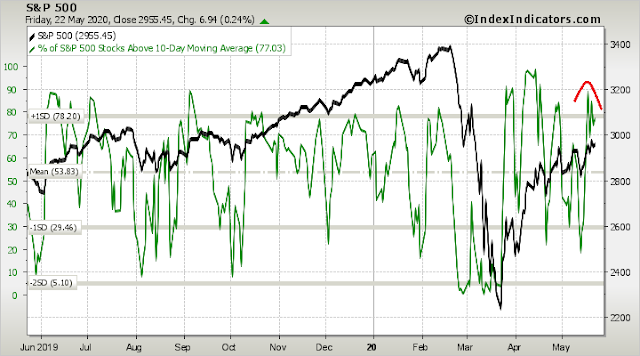 My inner trader remains short the market. For the purposes of risk control, his line in the sand is 2970 on a closing basis.

90 thoughts on “Waiting for the inflection point”