Do earnings matter anymore? – Humble Student of the Markets

FactSet reported last week that bottom-up aggregated earnings estimates have been skidding rapidly for both 2020 and 2021. 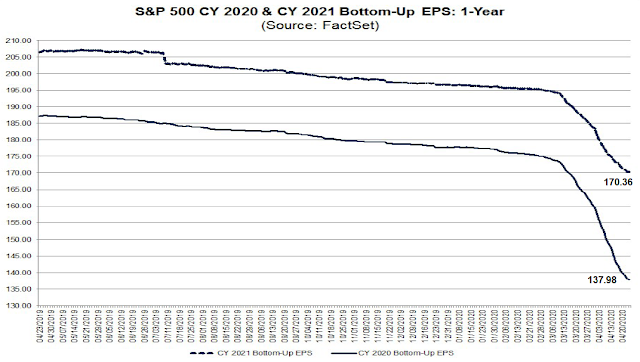 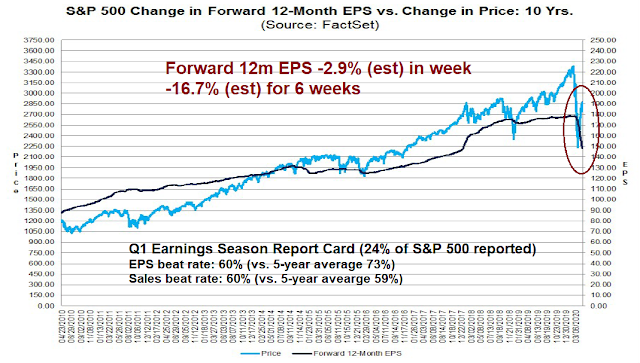 What is the market discounting? At this point, any estimates that analysts make are only wild guesses. No one can tell you the future (sorry, my time machine is still in the shop). We are all flying blind.

Those of us who are old enough may remember the 1996 plane crash of Clinton era Commerce Secretary Ron Brown on a hillside just outside Dubrovnik (see Politico story). The weather was bad, and the aircrew was unfamiliar with the navigation aids in the area.

Yes, today’s market conditions are like that. The WSJ reported that even Charlie Munger, Warren Buffett’s longtime partner, sounded a cautious tone:

In 2008-09, the years of the last financial crisis, Berkshire spent tens of billions of dollars investing in (among others) General Electric Co. and Goldman Sachs Group Inc. and buying Burlington Northern Santa Fe Corp. outright.

Will Berkshire step up now to buy businesses on the same scale?

“Well, I would say basically we’re like the captain of a ship when the worst typhoon that’s ever happened comes,” Mr. Munger told me. “We just want to get through the typhoon, and we’d rather come out of it with a whole lot of liquidity. We’re not playing, ‘Oh goody, goody, everything’s going to hell, let’s plunge 100% of the reserves [into buying businesses].’”

To be sure, there is a variety of opinions. An article in Barron’s pointed out an unusual reading in the University of Michigan Sentiment Survey. While sentiment for current conditions had deteriorated, future expectations are still bright. Is that what’s holding up stock prices? 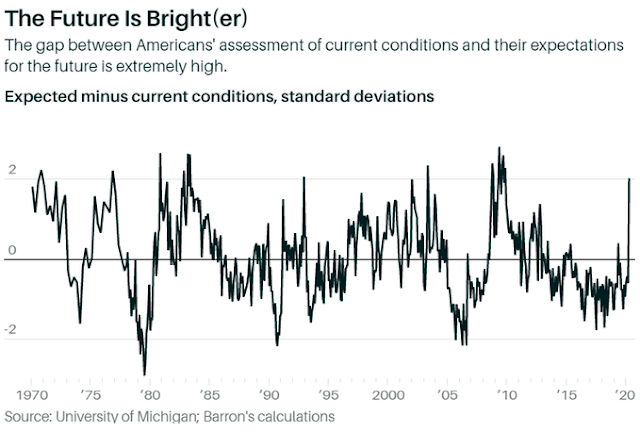 What are companies saying?

As we go through Q1 earnings season, companies usually offer guidance for Q2, as well as for the rest of the year. What are companies saying about the outlook?

FactSet reported that, as of April 24, 122 companies have reported, and 50 companies had commented on EPS guidance. Of the 50 companies, 30 (60%) were either withdrawing guidance or had withdrawing previous guidance for the year. The two sectors that had the biggest ratio of withdrawn guidance to providing guidance are industrial and healthcare companies. 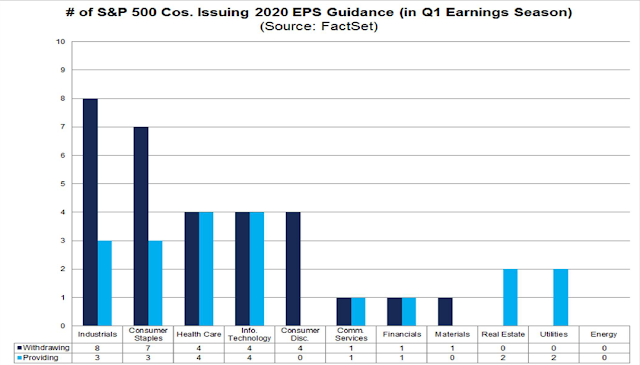 For more color, I turn to The Transcript, which transcribes earnings calls. Here is what some executives said two weeks ago about business conditions.

Consumer spending is getting crushed
“We’ve entered into a world we haven’t seen before. Much of the economy is essentially closed. Consumer spend is down over 25% year-over-year this past week with food and drug increasing and other spend down significantly. New auto sales in the month of March were down at 32%” – Wells Fargo (WFC) CEO Charlie Scharf

“if I think about kind of the last week of March. the card spend activity, just broadly for us was down about 30%, U.S. spend by category down total of 30%. The big categories, if you will, impacted are not going to be of any surprise to you, travel down 75%, dining and entertainment down some 60%, discretionary retail, which would include apparel, department stores, etc, down 50%, essentials were up 10%.” – Citigroup (C) CFO Mark Mason

“we see the environment showing near-term disruption and turbulence, but expect the longer-term to present opportunities to capitalize on many of our existing priorities” – J B Hunt Transport Services (JBHT) CEO John Roberts

“based on the data that we’re seeing from – that we’re collecting on a daily basis, is that we can see a recovery into Q3 and into Q4, especially for these more elective procedures…our modeling here suggest the kind of recovery that I’ve just described.” – Abbott Laboratories (ABT) Wyatt Decker

However, there are many reasons why this may not be a V-Shaped recovery
“It is not going to be what happened then, which was a very, very quick return to normalcy. That is not going to happen. At best, we’ll have kind of a rolling way out. As far as travel is concerned, while I’m absolutely optimistic that at some point, but I don’t think soon, I don’t think it’s until probably September, October, November, December, really get life back. And in order to travel, you’ve got to have that. So, they’re totally different situations. This is not analogous. I don’t think it’s analogous to anything. Certainly not analogous to 9/11 and to the financial crisis in ’08″” – Expedia (EXPE) Chairman Barry Diller

Here are some excerpts from the latest week’s earnings calls, which show a more nuanced interpretation of the gloom, as well as some signs of stabilization.

The question is how long will the decline last?
“our earnings will be driven by the answers to two questions that no one can now – no one yet can answer. First, when and how strongly does spending rebound as the global economy recovers? Second, how long do the challenges of high unemployment levels and small business shutdowns last, perhaps softened by the record levels of government support and what does that mean for our credit losses?” – American Express (AXP) CEO Stephen Squeri

The major forces at play are non-economic
“A lot of what will happen in the coming weeks and months will be dictated by governments, medical experts and circumstances that are completely unpredictable and out of our control.” – Moelis & Company (MC) CEO Ken Moelis

Some hard hit industries are seeing trends stabilize
“Delivery and carryout mix are holding relatively steady on average. Weekday sales have been significantly up, while weekends have generally been more pressured. Lunch and dinner dayparts are up, while late night had been more pressured, and we are seeing larger order sizes throughout the week.. we’re finding, at Domino’s, and I think some of our peers in the restaurant industry are finding, people are ordering extra food to have leftovers around also, which is a really interesting dynamic in the market today.” – Domino’s Pizza (DPZ) CFO Jeffrey D. Lawrence

“I’m pleased to report that only about 100 restaurants are fully closed at this time. These are mainly inside malls and shopping centers as well as 17 locations in Europe, while the rest of our restaurants remain open…as COVID-19 restrictions became more prevalent, our comps deteriorated and ended up declining 16% for the month, with the week ending March 29 being the trough at down 35%…April has seen our comps improve with the most recent week adjusted for Easter being in the negative high-teens range.” – Chipotle (CMG) CEO Brian Niccol

As different countries and US states tiptoe towards reopening their economies, FT Alphaville reported that Jeffries had commissioned a private poll of 5,500 consumers in 11 countries about their spending intentions in a post-lockdown environment. As FT Alphaville put it, “For those hoping for a uniform V-shaped recovery, look away now.” 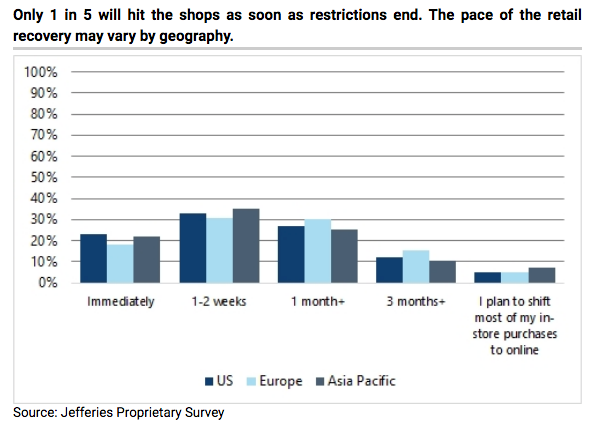 The challenges of forecasting

I recognize that forecasting the trajectory of the global economy for the next two years is a tremendous challenge right now.

FactSet reported that forward 12-month P/E is now at the nosebleed level of 19.1, with earnings estimates still falling. Even if you accept the premise that investors are looking over the 2020 valley, the P/E ratio based on 2021 estimates is 16.6, which is just below the 5-year average of 16.7, and above the 10-year average of 15.0. 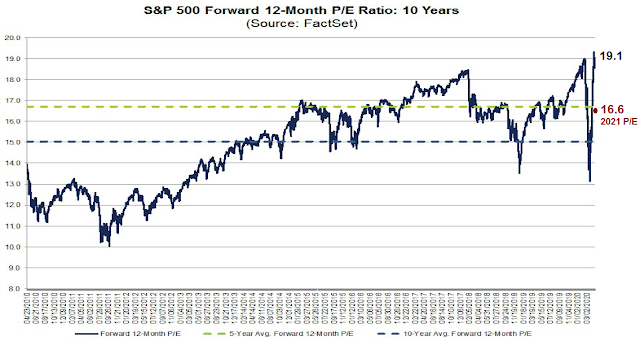 Still this makes no sense, as valuations are clearly elevated. Why would you buy the market at about the 5-year average forward P/E given the high level of uncertainties facing investors?

The FT’s Martin Wolf recently unpacked the IMF’s forecasts for 2020 and 2021 before the virus, and after the crisis. The outlook does not look good, especially for the advanced economies. 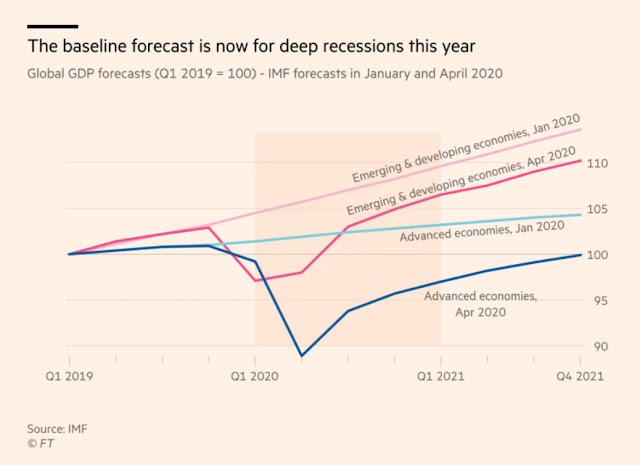 Moreover, there is considerable uncertainty around the forecasts, depending on differing scenarios. 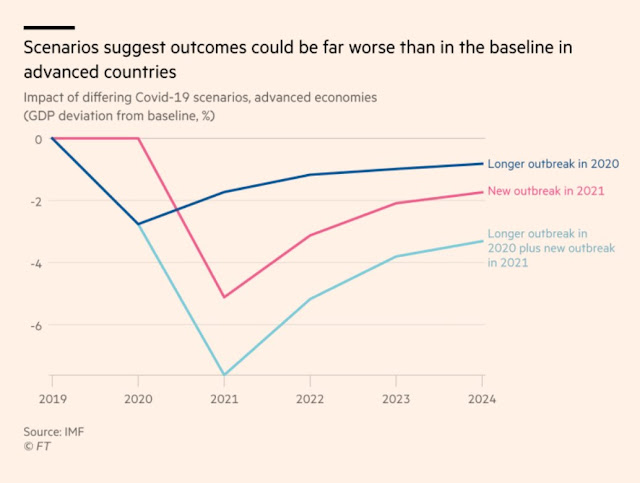 The WTO’s trade forecasts are all over the place. 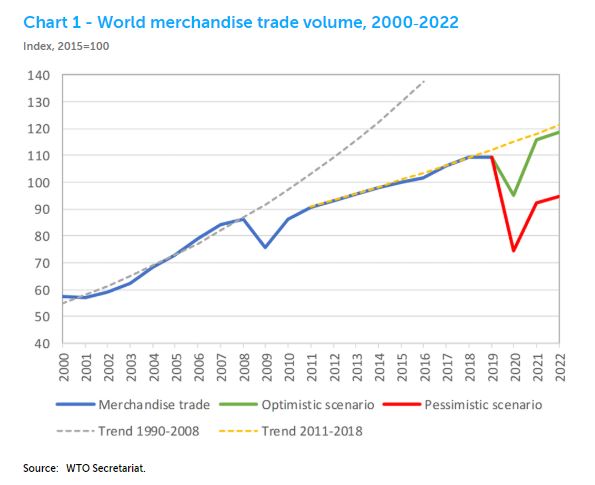 Could that explain the disconnect between the stock market’s elevated levels? Is the market just discounting the best case scenario and ignoring the risks of the worst case?

Here’s is how I square the circle of dire economic outlooks and buoyant stock prices. The stock market isn’t the economy, largely because of the narrow leadership of the megacap stocks and their market concentration.

I wrote yesterday about the risks of narrow leadership (see Factor review: Narrow leadership and its implications). Michael Batnick documented how the top five stocks in the index equal the weight of the bottom 350. 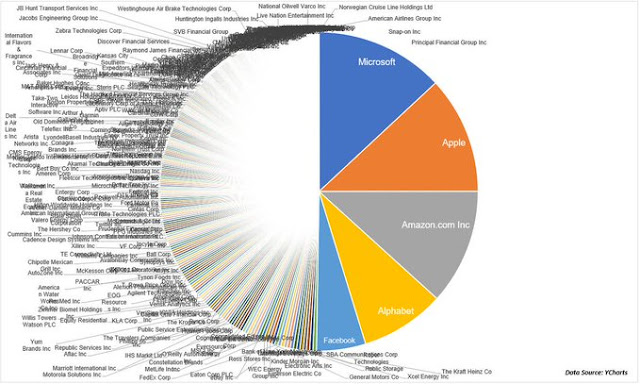 Zero Hedge (bless their eternally bearish and Apocalyptic hearts) seized upon a report from Goldman Sachs calling for an imminent momentum crash owing to narrow leadership, but I consider that a “this will not end well” story that can last a long time.

High market concentration is not necessarily bearish. This kind of concentration is unusual in today’s era, but it was not unusual back in the 1960’s and 1970’s. That’s why the DJIA was an important market benchmark back then, because the big stocks were the market. 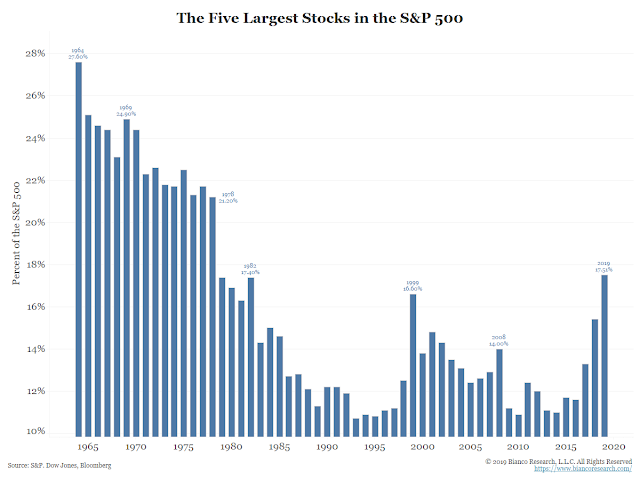 I asked rhetorically at the beginning of this publication whether earnings matter. Yes, earnings matter, but the analysis so far confuses the market with the economy. The stock market does not represent the economy because of the narrow market concentration, and the leadership of the megacap stocks.

The megacap leadership stocks are reporting earnings this week, namely Alphabet (Tuesday), Microsoft and Facebook (Wednesday), and Apple and Amazon (Thursday). Analysis from Morgan Stanley concluded that the index gains by the top five companies have “been driven more by relative earnings resilience rather than valuation as forward net income estimates have come down far less than the market”. These earnings reports may determine the short and medium term tone of the market. 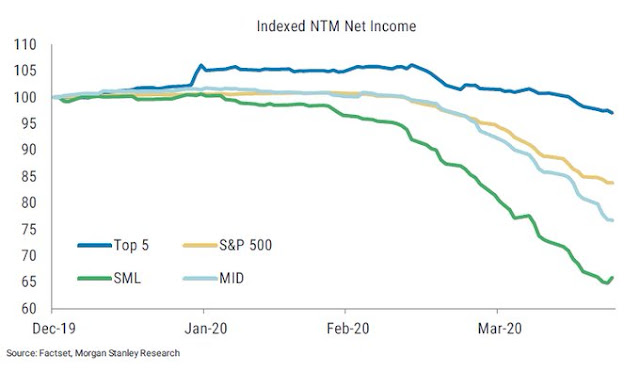 In the short run, that’s how earnings matter.

63 thoughts on “Do earnings matter anymore?”